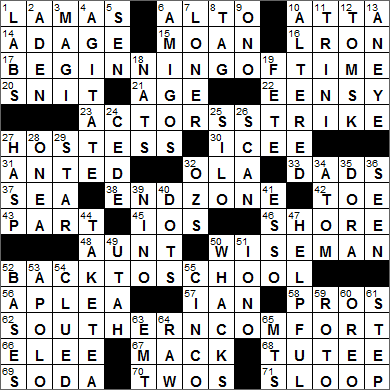 16. Scientology creator Hubbard L RON
L. Ron Hubbard wrote a self-improvement book in 1950 called “Dianetics: The Modern Science of Mental Health”. A few years later the concepts were used in the founding of the Church of Scientology.

17. Big Bang, to a physicist BEGINNING OF TIME
According to the Big Bang theory, the universe came into being just under 14 billion years ago. According to the theory, the universe started out as a hot and dense mass that began to expand rapidly (in a “big bang”). Within three minutes of the “bang”, the universe cooled so that energy was converted into subatomic particles like protons, electrons and neutrons. Over time, subatomic particles turned into atoms. Clouds of those atoms formed stars and galaxies.

20. Snarky state SNIT
The exact etymology of “snit”, meaning “fit of temper”, isn’t really known. The term was first used in print in the play “Kiss the Boys Goodbye” by Clare Booth Luce, which dates back to the 1930s and is set in the American South.

“Snark” is a term that was coined by Lewis Carroll in his fabulous 1876 nonsense poem “The Hunting of the Snark”. Somehow, the term “snarky” came to mean “irritable, short-tempered” in the early 1900s.

33. Pop’s favorite root beer? DAD’S
Dad’s root beer was developed by Ely Klapman and Barney Berns in 1937, and was given the name “Dad’s” in honor of Klapman’s father who used to make root beer for his family at home.

37. Old man’s place, in Hemingway SEA
If you’ve read Ernest Hemingway’s “The Old Man And The Sea” (maybe first at school, like me!) you’ll likely remember it as a quick read as it is a novella, although it might be better described as a “long short story”. It was first published in 1952, the last major work that Hemingway had published in his lifetime. That first publication was as a story in “Life Magazine”, and it was such a hit that the magazine sold 5 million copies in the first two days. “The Old Man and the Sea” won a Pulitzer in 1952 and two years later the title was cited when Hemingway was awarded the Nobel Prize for Literature.

45. Aegean island IOS
The Cyclades are a group of islands in the Aegean Sea lying southeast of the Greek mainland. There are about 200 islands in the group, almost all of which are the peaks of a submerged mountain range. Ios is one of the larger islands, 11 miles long and 6 miles wide.

48. Selma or Patty, to Bart AUNT
In “The Simpsons”, Marge Simpson has two older twin sisters. Their full names are Patricia “Patty” Bouvier and Selma Bouvier-Terwilliger-Hutz-McClure-Stu-Simpson. Selma acquired that multiple-barreled name through a string of unsuccessful marriages.

57. Actor McKellen IAN
Sir Ian McKellen is a marvelous English actor, someone who is comfortable playing anything from Macbeth on stage to Magneto in an “X-Men” movie. On the big screen, McKellen is very famous for playing Gandalf in “The Lord of Rings”. In the UK Sir Ian is noted for being at the forefront of the campaign for equal rights for gay people, a role he has enthusiastically embraced since the eighties.

62. Alabama Slammer liqueur SOUTHERN COMFORT
Southern Comfort is a brand of liqueur that is flavored with fruit, spice and whiskey. It was first produced in 1874, by a bartender in New Orleans called Martin Wilkes Heron. Heron originally named his formulation “Cuffs and Buttons”.

66. Gen. Robert __ E LEE
Robert E. Lee is renowned as a southern officer in the Civil War. Lee was a somewhat reluctant participant in the war in that he opposed the secession of his home state of Virginia from the Union. At the beginning of the war, President Lincoln invited Lee to take command of the whole Union Army but he declined, choosing instead to stay loyal to his home state. During the Civil War, Lee’s men referred to him affectionately as “Marse Robert”, with “marse” being slang for “master”.

67. Truck maker with a bulldog logo MACK
Mack Trucks was founded by John Mack in the early 1900s, after he had spent some years working in companies that made carriages and electric motor cars. Along with his two brothers, Mack started their company to focus on building heavy-duty trucks and engines.

71. Single-master SLOOP
Sloops and cutters are sailboats, and each has just one mast. One major difference between the two types of vessel is that the mast on a cutter is set much further aft than the mast on a sloop.

Down
1. Some are chocolate LABS
The Labrador (Lab) breed of dog has been around at least since 1814, and the chocolate Labrador appeared over a century later in the 1930s.

2. Arabian Peninsula port ADEN
Aden is a seaport in Yemen, located on the Gulf of Aden by the eastern approach to the Red Sea. Aden has a long history of British rule, from 1838 until a very messy withdrawal in 1967. A native of Aden is known as an Adeni. Some believe that Cain and Abel are buried in the city.

3. Gift-bearing trio MAGI
“Magi” is the plural of the Latin word “magus”, a term applied to someone who was able to read the stars. Hence, magi is commonly used with reference to the “wise men from the East” who followed the star and visited Jesus soon after he was born.

9. Lennon collaborator ONO
Yoko Ono is an avant-garde artist. Ono actually met her future husband John Lennon for the first time while she was preparing her conceptual art exhibit called “Hammer a Nail”. Visitors were encouraged to hammer in a nail into a wooden board, creating the artwork. Lennon wanted to hammer in the first nail, but Ono stopped him as the exhibition had not yet opened. Apparently Ono relented when Lennon paid her an imaginary five shillings to hammer an imaginary nail into the wood.

11. Singer Lopez TRINI
Trini Lopez is a noted singer and guitarist from Dallas, Texas. He is perhaps best known for his international hit “If I Had a Hammer” from 1963, as well as “Lemon Tree” from 1965.

12. Siberian industrial center TOMSK
Tomsk is one of the oldest towns in Siberia, having been founded in 1604. The city gets its name from the Tom River on which it is situated.

18. 2014 N.L. East champs NATS
The Washington Nationals baseball team started out life as the Montreal Expos in 1969. The Expos moved to Washington in 2005 becoming the Nats. There are only two Major Leagues teams that have never played in a World Series, one being the Mariners and the other the Nats.

25. Rural skyline feature SILO
Silo is a Spanish word that we absorbed into English, originally coming from the Greek word “siros” that described a pit in which one kept corn.

27. Door fastener HASP
The “hasp” of a lock might refer to more than one thing. The u-shape loop protruding from a padlock is often called a “lock hasp”, for example.

28. Most fit to be drafted ONE-A
The US government maintains information on all males who are potentially subject to military conscription, using what is called the Selective Service System(SS). In the event that a draft was held, men registered would be classified into groups to determine eligibility for service. Class 1-A registrants are those available for unrestricted military service. Other classes are 1-A-O (conscientious objector available for noncombatant service), 4-A (registrant who has completed military service) and 4-D (Minister of religion).

The unit of mass that we know today as a “pound” is descended from the old Roman unit of weight known as a “libra”. That “libra” connection is why we abbreviate pound to “lb”. The name “pound” though comes from the Latin “pondo” meaning “weight”. Our term “ounce” comes from the Latin “uncia”, which was 1/12 of a Roman “libra”.

35. Explorer on Nick Jr. DORA
“Dora the Explorer” is a cartoon series shown on Nickelodeon. Part of Dora’s remit is to introduce the show’s young viewers to some Spanish words and phrases.

41. Name on some Canadian pumps ESSO
The brand name Esso has its roots in the old Standard Oil company as it uses the initial letters of “Standard” and “Oil” (ESS-O). The Esso brand was replaced by Exxon in the US, but ESSO is still used in many other countries.

52. Fenway corners BASES
The left field wall in Fenway Park, home of the Boston Red Sox baseball team, is the tallest encountered in Major League ballparks. The wall was built so high to prevent viewing of games from outside of the park for free. The height also prevents home runs that would be possible in other ballparks, and so, given its color and reputation, it is called the Green Monster.

53. Speed skater __ Anton Ohno APOLO
Speed-skater Apolo Ohno has won more Winter Olympics medals than any other American. Ohno also did a great job winning the 2007 season of television’s “Dancing with the Stars”.

59. Tiller lead-in ROTO-
The rototiller (or rotary tiller) was invented by Arthur Clifford Howard in 1912, in Australia.

60. Black-and-white treat OREO
The Oreo was the best-selling cookie in the 20th century, and almost 500 billion of them have been sold since they were introduced in 1912 by Nabisco. In those early days the creme filling was made with pork fat, but today vegetable oils are used instead. If you take a bite out of an Oreo sold outside of America you might notice a difference from the homegrown cookie, as coconut oil is added in the overseas version to give a different taste.