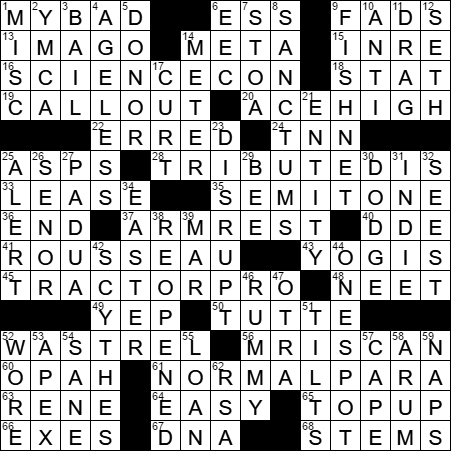 Theme: Front to Back

Happy Saint Paddy’s Day, everyone! Today’s themed answers are formed by taking the front letters of a well-known word, and placing them at the end of the answer:

That would be an s-bend in the course.

Even though the term is used in many competitions, I think that we most associate “Grand Prix” with the series of Formula One motor races. These Formula One Grand Prix races trace their roots back to organized automobile road races from one French town to the next that date back to 1894. “Grand Prix” translates from French as “grand, big prize.”

The imago is an intermediate stage in the development of an insect. All four stages are embryo, larva, pupa and imago.

In the game of poker, a “flush” is a hand with all cards in the same suit.

Spike TV was a 2003 relaunch of The Nashville Network (TNN) and was marketed as the first television channel for men. The station owners ran into trouble though as the director Spike Lee sued, claiming that viewers would assume he was associated with the channel because of the use of “Spike”. The suit was settled when Lee concluded that there was no intention to trade on his name.

“Dis” is a slang term meaning “insult” that originated in the eighties. It is a shortened form of “disrespect” or “dismiss”.

In western music, an octave is composed of twelve notes, twelve semitones.

40. Pres. when Brown v. Board of Education of Topeka was decided : DDE

Brown v. Board of Education was the US Supreme Court Case that established the unconstitutionality of separate public schools for black and white students. Oliver L. Brown was one of thirteen parents who filed a class action suit against the Topeka, Kansas Board of Education on behalf of their twenty children. The suit called for the city to reverse its racial segregation policy. The final decision by the US Supreme Court, led by Chief Justice Earl Warren, was unanimous in rejecting segregation.

“The Social Contract” is a 1762 book by philosopher Jean-Jacques Rousseau that contains the famous phrase “man is born free, but he is everywhere in chains”. Rousseau expanded on this idea, asserting that the modern commercial society represses the freedom of individuals. His solution was to organize a political community divided into the sovereign and the government. The sovereign was the whole population and it had complete legislative authority. The government dealt with the application of law. A government that exceeded its boundaries could be abolished by the people, and a new government appointed.

The hair removal product “Neet” was launched in Canada in 1901, and was also sold as “Immac”. Today it is sold under the name “Veet”.

Nair is a hair removal product that has some pretty harsh ingredients. The most important active constituents are calcium hydroxide (“slake lime”) and sodium hydroxide (“caustic soda”). Other Nair components seem to be there to soothe the skin after the harsher chemicals have done their job. The name “Nair” probably comes from combining “no” and “hair”.

Mozart’s comic opera “Così fan tutte” is also known in English as “The School for Lovers”. The literal translation of the opera’s title is “Thus do all (women)”, or “Women are like that”.

A “wastrel” is a spendthrift, someone who doesn’t “waste” much.

Opah is the more correct name for the fish also known as the sunfish, moonfish or Jerusalem haddock. I’ve seen one in the Monterrey Aquarium. It is one huge fish …

A paralegal (sometimes just “para”) is someone who is trained in legal matters sufficiently to assist a lawyer. A paralegal cannot engage in the practice of law and must be supervised by a qualified lawyer.

Philanthropy is a concern for human welfare, and the act of donating to persons or groups who support such concerns. The term derives from the Greek “phil-” meaning “loving”, and “anthropos” meaning “mankind”.

William Shakespeare’s “The Taming of the Shrew” is about a courting couple. The male is Petruchio, a gentleman of Verona, and the female is Katharina, the so-called “shrew”. As the play progresses, the “shrew” is “tamed” and becomes an “obedient” bride … a controversial storyline in the contemporary world, to say the least. Regardless, modern adaptations have been made, including 1948’s Broadway musical “Kiss Me Kate” and the 1999 romantic comedy “10 Things I Hate About You”.

The Caravan is a minivan that has been manufactured by Dodge since the model year 1984. It is basically the same vehicle as the Chrysler Town and Country.

The Sundance film festival is the largest independent film event in the country, and takes place every year around the Sundance Resort near Provo, Utah. The festival has its roots in the Utah/US Film Festival which started in Salt Lake City in 1978. Management of the festival was taken over by Robert Redford’s Sundance Institute in 1985. The festival has became a bit of a media feeding frenzy in recent years, as a lot of A-list celebrities attend. The Festival organizers introduced a “Focus on Film” campaign in 2007 to try to offset some of the madness.

The phrase “do not fold, spindle or mutilate” first appeared on IBM punched cards. It was a warning to users to treat the cards unlike other items of paper, not folding them, stapling them, not impaling them on a spindle.

Gin rummy is a variant of the slower game of standard rummy and was introduced in 1909 by one Elwood Baker and his son.

Jack-in-the-pulpit is a perennial plant native to eastern North America. It’s a nasty plant though and contains oxalic acid, a compound that can be very painful if ingested and that can even cause death if taken in sufficient quantities.

The Republic of South Africa (RSA)

37. Something shared on a plane : ARMREST

40. Pres. when Brown v. Board of Education of Topeka was decided : DDE

66. Participants in some awkward meetings : EXES