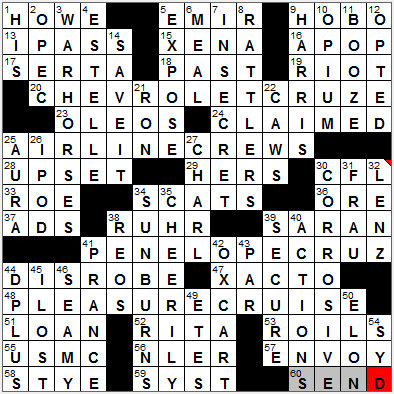 CROSSWORD SETTER: Steven J. St. John
THEME: Sounds Like a the Same Thing … each of the theme answers ends in words that sound the same:

Today’s Wiki-est, Amazonian Googlies
Across
1. Former Astros, A’s and Mets manager Art HOWE
Art Howe was a professional baseball player, coach, scout and manager. As manager, Howe worked with the Astros, As and Mets. Howe was portrayed by actor Philip Seymour Hoffman in what I thought was a very absorbing film, 2011’s “Moneyball”.

5. Arabian Peninsula title EMIR
An emir is a prince or chieftain, most notably in the Middle East. In English, “emir” can also be written as “amir” and “ameer” (watch out for those spellings in crosswords!).

9. Nonpaying rail rider HOBO
No one seems to know for sure how the term “hobo” originated, although there are lots of colorful theories. My favorite is that “hobo” comes from the first letters in the words “ho-meward bo-und”, but it doesn’t seem very plausible. A kind blog reader tells me that according to Click and Clack from PBS’s “Car Talk” (a great source!) “hobo” comes from “hoe boy”. Hoe boys were young men with hoes looking for work after the Civil War. Hobos differed from “tramps” and “bums”, in that “bums” refused to work, “tramps” worked when they had to, while “hobos” traveled in search of work.

15. Princess once allied with Hercules XENA
The Xena character, famously played by actress Lucy Lawless, was introduced in a made-for-TV movie called “Hercules and the Amazon Women”. Lawless reprised the role in a series called “Hercules: The Legendary Journeys”. Xena became so popular that a series was built around her character, with Lawless retained for the role.

17. Mattress brand SERTA
Serta was founded in 1931 when a group of 13 mattress manufacturers came together, essentially forming a cooperative. Today, the company is owned by eight independent licensees in a similar arrangement. Interesting …

20. GM compact that replaced the Cobalt CHEVROLET CRUZE
The Cobalt was Chevrolet’s compact car from 2005 to 2010, when it was replaced by the Chevrolet Cruze.

23. Soft spreads OLEOS
Emperor Louis Napoleon III of France announced a competition to develop a substitute for butter, a substitute that would be more accessible to the lower classes and more practical for the armed forces. In 1869, a French chemist called Hippolyte Mege-Mouries came up with something he called oleomargarine, which was eventually manufactured under the trade name “margarine”. The name “oleomargarine” also gives us our generic term “oleo”.

30. B.C. Lions’ org. CFL
The Canadian Football League was formed back in 1958, and has helped increase the popularity of football in the country, although the sport still lags behind ice hockey.

The BC Lions football team is the youngest in the Canadian Football League, having played their first season in 1954.

33. School-to-be? ROE
Roe is the name given to fish eggs or the ovaries of a fish laden with eggs. When the roe develop into fish, the fish may swim around in schools.

34. Does some impromptu singing SCATS
Scat singing is a vocal improvisation found in the world of jazz. There aren’t any words as such in scat singing, just random nonsense syllables made up on the spot.

38. Dortmund’s region RUHR
The Ruhr is a large urban area in western Germany. The area is heavily populated, and is the fifth largest urban area in the whole of Europe, after Istanbul, Moscow, London and Paris.

Dortmund is a city in the western part of Germany. Dortmund has changed its image in recent decades as it is noted for devoting a lot of space to waterways, woodlands, parks and other green spaces. Historically the city was very industrial with many steel mills and coal mines.

39. It’s a wrap SARAN
What’s known as plastic wrap in America, we call cling-film in Ireland. Plastic wrap was one of those unintended inventions, a byproduct of a development program to create a hard plastic cover for cars.

41. “Vanilla Sky” actress PENELOPE CRUZ
Penélope Cruz is an actress from Madrid, Spain. Cruz was the first Spanish actress to win an Oscar, and to be given a star on the Hollywood Walk of Fame.

47. Hobbyist’s cutting brand X-ACTO
The X-Acto knife was invented in the thirties by a polish immigrant, although his intention was to come up with a scalpel for surgeons. The knife couldn’t cut it (pun intended!) as a scalpel though, because it was difficult to clean. The inventor’s brother-in law suggested it be used as a craft knife, and it is still around today.

52. Beatles meter maid RITA
“Lovely Rita” is a Beatles song on the “Sgt. Pepper’s Lonely Hearts Club Band” album. When the album was released in 1967, the term “meter maid” wasn’t used in the UK, although it was a slang term used in the US. The song helped spread the usage of “meter maid” all around the English-speaking world. Apparently the inspiration for the song was McCartney getting a parking ticket one day outside the Abbey Road recording studios. He accepted the ticket with good grace, from a warden named Meta Davis. McCartney felt that Meta “looked like a Rita”, so that was the name she was given in the song.

The US Department of Defense (DOD) employs over 3 million people, including servicemen and servicewomen and supporting civilians. That makes the DOD the biggest single employer in the whole world. As we hear quite regularly, the DOD is allocated over half of the discretionary spending in the federal budget.

56. D’back, for one NLER
The Arizona Diamondbacks joined Major League Baseball’s National League in 1998. By winning the World Series in 2001 the Diamondbacks became the fastest expansion team to do so in Major League history.

Down
2. The UAE has been a member of it since 1967 OPEC
The OPEC cartel (the Organization of the Petroleum Exporting Countries) was formally established in 1960 and has been headquartered in Vienna since 1965. The US is actually the third largest oil producer in the world (after Russia and Saudi Arabia). One reason America isn’t in OPEC, even though we are a big producer, is that we import a lot more than we export. But you probably knew that already …

4. George’s mom on “Seinfeld” ESTELLE
In “Seinfeld”, Jerry’s friend George was the son of Frank and Estelle Costanza. George was of course played by Jason Alexander, and the character was loosely based on the show’s co-creator Larry David. The name, however, came from Jerry Seinfeld’s real-life friend Mike Costanza. George’s parents were played by the great Jerry Stiller and Estelle Harris.

6. Dessert preceder MEAL
I would have thought that dessert was part of a meal, but maybe that’s just me …

9. Ed of “Apollo 13” HARRIS
Ed Harris is a very talented actor, noted for two great performances in movies about the Space Program. He played John Glenn in “The Right Stuff” in 1983, his “breakthrough” role. Twelve years later he made a stellar performance as the flight director Gene Kranz in “Apollo 13”.

“Apollo 13” is a great film, and supposedly one that is historically and technically accurate. The film is an adaption of mission commander Jim Lovell’s book “Lost Moon: The Perilous Voyage of Apollo 13”. I am going to have to put that book on my Christmas list …

10. __ den OPIUM
Opiates are the narcotic alkaloids found in the opium poppy plant, although some synthetic versions and derivatives of the same alkaloids are also called opiates. To produce opiates, the latex sap of the opium poppy is collected and processed. The naturally-occurring drugs of morphine and codeine can both be extracted from the sap. Some synthesis is required to make derivative drugs like heroin and oxycodone.

21. “Apollo 13” director Howard RON
Ron Howard sure has come a long way since playing Opie Taylor on “The Andy Griffith Show”. Howard has directed some fabulous movies, including favorites of mine like “Apollo 13”, “A Beautiful Mind” and “The Da Vinci Code”. And today, “Opie” is a grandfather …

22. Sounds near the ears CAWS
A caw is the harsh cry of a crow, and crows might be found in fields of corn …

26. Song-holding gadget IPOD
The iPod is Apple’s signature line of portable media players. The iPod first hit the market in 2001 with a hard drive-based device, now known as the iPod Classic. Later models all use flash memory, allowing a smaller form factor. The smallest of the flash-based models is the iPod Shuffle, which was introduced in 2005.

32. Emmy winner Kay LENZ
Kay Lenz is an American television actress, most famous for playing Kate Jordache in the TV mini-series adaptation of the Irwin Shaw novel “Rich Man, Poor Man”. Off the screen, she was noted as the first wife of the singer and actor, David Cassidy.

34. Aloe targets SUNBURNS
Aloe vera has a number of alternate names that are descriptive of its efficacy as a medicine. These include the First Aid plant, Wand of Heaven, Silent Healer and Miracle Plant.

38. Speed Wagons, e.g. REOS
The REO Motor Company was founded by Ransom E. Olds (hence the name REO). The company made cars, trucks and buses, and was in business from 1905 to 1975 in Lansing, Michigan.

The REO Speed Wagon (note the space between “speed” and “wagon”) is the vehicle. REO Speedwagon is the American rock band.

49. Seine summers ETES
On the River Seine in Paris, one might spend the summer (été).

50. North Carolina school ELON
Elon is a city in the Piedmont region of North Carolina, close to the city of Burlington. Elon University is a private liberal arts school founded in 1889.

54. Pink Floyd guitarist Barrett SYD
Syd Barrett was the lead singer and a founding member of the English rock band Pink Floyd. Barrett was only active as a musician for just over ten years. He retired from the music scene in 1975 and spent the next 30 years living off Pink Floyd royalties until he passed away in 2006.

Pink Floyd were an English rock band founded in 1965. The band’s most famous albums were probably “The Dark Side of the Moon” and “The Wall”.