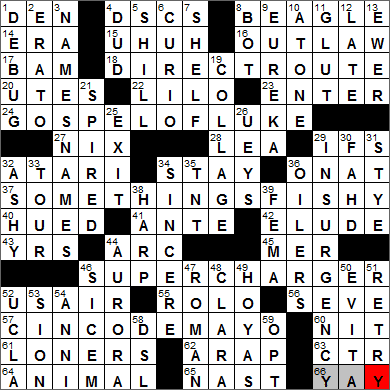 CROSSWORD SETTER: Robert Cirillo
THEME: Containers of Fish … each of today’s theme answers have a FISH hidden inside:

Today’s Wiki-est, Amazonian Googlies
Across
4. Mil. awards DSCS
The Distinguished Service Cross (DSC) is the second highest honor awarded to members of the US Army. The DSC is equivalent to the Navy Cross and the Air Force Cross.

8. Long-eared pooch BEAGLE
The Beagle breed of dog is a scent hound, developed for tracking small game. Because of this characteristic, Beagles are often used as detection dogs in customs halls around the world. The world’s most famous Beagle is probably Snoopy from the comic strip “Peanuts”.

14. Stat for Clayton Kershaw ERA
Clayton Kershaw is a pitcher for the LA Dodgers. Kershaw’s is noted for his charitable work off the field, especially his efforts to raise money for an orphanage in Zambia.

20. Uintah and Ouray Reservation residents UTES
The Ute is a group of Native American tribes that now resides in Utah and Colorado. The Ute were not a unified people as such, but rather a loose association of nomadic groups.

22. Disney’s “__ & Stitch” LILO
“Lilo & Stitch” was released by Disney in 2002. Compared to other Disney feature-length cartoons, “Lilo & Stitch” was relatively cheaply produced, using the voices of lesser known actors. One interesting change had to take place in the storyline during production, when Lilo was meant to fly a Jumbo Jet through downtown Honolulu in one sequence. This was replaced with a sequence using a spaceship instead, as the producers were sensitive to public sentiment after the September 11 attacks.

24. Good Samaritan parable source GOSPEL O(F LUKE)
“The Good Samaritan” is a parable told by Jesus that can be read in the Gospel of Luke. According to the story, a Jewish traveler is robbed, beaten and left for dead at the side of the road. A priest happens by and sees the poor man, but does not stop to help. A fellow Jew also passes and refuses to help. A third man stops and gives aid. This kind person is a Samaritan, a native of Samaria. Back then Jewish and Samaritan people were said to generally despise each other, and yet here a detested creature gives aid. Jesus told to the story to a self-righteous lawyer, the intent being (I assume) to shake up his self-righteousness.

32. Early gaming name ATARI
At one point, the electronics and video game manufacturer Atari was the fastest growing company in US history. However, Atari never really recovered from the video game industry crash of 1983.

45. Cousteau’s workplace MER
Jacques-Yves Cousteau started off his career in the French Navy, aiming for a working life in aviation. Because of a car accident, Cousteau had to abandon his first career choice and instead went to sea. Famously, he invented the Self Contained Underwater Breathing Apparatus (SCUBA), also called the aqualung.

46. Hot-rodder’s add-on SU(PERCH)ARGER
A supercharger increases the power of an engine by forcing air into the combustion chamber under pressure. The more air there is in the chamber, the more fuel can be burned, and the more work is done by the engine.

52. American competitor, as it was once known USAIR
From 1953, what today is US Airways was called Allegheny Airlines. In the seventies, customers became very dissatisfied with the company’s service levels as it struggled to manage a rapid expansion in its number of flights. These problems earned the airline the nickname “Agony Air”. Allegheny tried to leave the “agony” behind in 1979 and changed its name to USAir. In 1997, the name was again changed, to US Airways.

55. Chewy candy brand ROLO
Rolo was a hugely popular chocolate candy in Ireland when I was growing up. Rolo was introduced in the thirties in the UK, and is produced under license in the US by Hershey. I was a little disappointed when I had my first taste of the American version as the center is very hard and chewy. The recipe used on the other side of the Atlantic calls for a soft gooey center.

56. Memorable golfing Spaniard, familiarly SEVE
Seve Ballesteros was a very entertaining golfer from Spain, once ranked as the world’s number one player. Sadly, Ballesteros died from brain cancer in 2011, at the age of 54.

64. Jaguar or impala ANIMAL
The jaguar is the third largest feline in the world, after the tiger and the lion. The jaguar resembles a leopard, but is bigger. It is found through much of South and Central America as well as the southern US. The jaguar has a really strong bite, even compared to the bigger cats. It usually kills its prey by biting through the skull.

65. Tweed’s caricaturist NAST
Thomas Nast was an American caricaturist and cartoonist. He was the creator of the Republican Party elephant, the Democratic Party’s donkey, Uncle Sam and the image of the plump and jocular Santa Claus that we use today.

Down
2. Muse with a lyre ERATO
In Greek mythology, Erato was the Muse of Lyric Poetry.

5. Carnival setup man SHILL
A shill is someone planted, perhaps in an audience, with the job of feigning enthusiasm.

9. “I have it!” EUREKA
Eureka translates from Greek as “I have found it”. The word is usually associated with Archimedes, uttered as he stepped into his bath one day. His discovery was that the volume of water that was displaced was equal to that of the object (presumably his foot) that had been submerged. He used this fact to determine the volume of a crown, something he needed in order to determine if it was made of pure gold or was a forgery.

12. After curfew LATE
Our word “curfew” comes from an Old French word meaning “cover fire”. In medieval days a bell would be ring in the evenings as a signal to bank the hearths in preparation for sleeping. The intent was to prevent uncontrolled fires starting from fireplaces that were nottended during the night.

19. Artistic potpourri COLLAGE
A collage is a piece of artwork that is made by assembling pieces of paper and objects that are glued onto paper or canvas. The term “collage” comes from the French “coller” meaning “to glue”.

30. Saudi king, 1982-2005 FAHD
King Fahd bin Abdul Aziz Al Saud was the head of the kingdom of Saudi Arabia until he passed away in 2005. King Fahd was somewhat of a titular head of state since 1995 when he suffered a stroke. In his heyday, the king was fond of a luxurious lifestyle, especially when outside of the kingdom. His 482 ft yacht sported two swimming pools, a garden, a hospital with two operating rooms, and four Stinger missiles. His personal Boeing 747 aircraft even had its own fountain.

35. Volatile initials TNT
TNT is an abbreviation for trinitrotoluene. Trinitrotoluene was first produced in 1863 by the German chemist Joseph Wilbrand, who developed it for use as a yellow dye. TNT is relatively difficult to detonate so it was on the market as a dye for some years before its more explosive properties were discovered.

39. Tornado response gp. FEMA
Federal emergency management has been structured for over 200 years, but what we know today as the Federal Emergency Management Agency (FEMA) was created in 1979 in an Executive Order issued by President Jimmy Carter.

44. Natural light show AURORA
The spectacular aurora phenomenon is seen lighting up the night sky at both poles of the earth (the Aurora Borealis in the north, and the Aurora Australis in the south). The eerie effect is caused by charged particles colliding with atoms at high latitudes.

46. Order to a boxer SIC ‘EM
Sic ’em is an attack order given to a dog, instructing the animal to growl, bark or even bite. The term dates back to the 1830s, with “sic” being a variation of “seek”.

48. The “It Girl” Bow CLARA
Clara Bow was a fabulous star of silent film, with her most famous movie being “It” from 1927. Clara Bow’s performance was so celebrated in the movie that she was forever to be known as the “It-girl”. The term “it” was a euphemism for “sex appeal”, and that is what Clara Bow was known to “exude”. Bow applied her red lipstick in the shape of a heart, and women who copied this style were said to put on a “Clara Bow”.

49. Georgetown hoopsters HOYAS
The athletic teams of Georgetown University are known as the Hoyas. The name is derived from “Hoya Saxa”, a traditional cheer yelled out at Georgetown games as far back as 1893. The term is a mixture of Greek and Latin, with the Greek word “hoya” meaning “such” or “what”, and “saxa” translating from Latin as “rocks” or “small stones”. The cheer is usually rendered in English as “what rocks!”.

50. Musical set in Buenos Aires EVITA
“Evita” was the follow up musical to “Jesus Christ Superstar” for Andrew Lloyd Webber and Tim Rice. Both of these works were originally released as album musicals, and very successful ones at that (I remember buying them when they first came out). For the original album’s cast they chose Irish singer Colm Wilkinson (or C. T. Wilkinson, as we know him back in Ireland) to play “Che”, the narrator of the piece. “Evita” was made into a film in 1996, with Madonna playing the title role.