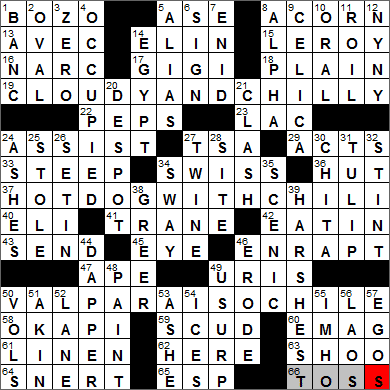 Today’s Wiki-est, Amazonian Googlies
Across
1. Red-headed clown BOZO
Bozo the Clown is a character created in 1946 by Alan Livingston. Bozo was introduced in the first ever “record reader”, a children’s illustrated read-along book that came with a vinyl recording of the story. The book/record was so successful that Bozo moved to television, and he has been around ever since.

5. Enzyme ending -ASE
Enzymes are basically catalysts, chemicals that act to increase the rate of a particular chemical reaction. For example, starches will break down into sugars over time, especially under the right conditions. However, in the presence of the enzyme amylase (found in saliva) this production of sugar happens very, very quickly.

14. Tiger Woods’s ex ELIN
Elin Nordegren is the ex-wife of Tiger Woods. Nordegren is a native of Sweden, and it was back in Sweden that she was hired as a nanny by the wife of golfer Jasper Parnevik. The job brought her to the US where she became a popular attraction on the professional golfing circuit. Apparently there was a long line of single golfers who wanted to be introduced to her, with Tiger Woods asking for an introduction for a year before he finally got to go out with her. The pair were married in 2004.

Jim Croce’s most successful songs were “Bad. Bad Leroy Brown” and “Time in a Bottle”. Like so many great singers it seems, Croce died in a plane crash. He was killed along with five others just after take off when the small commercial plane in which he was travelling hit a tree, possibly because the pilot had a heart attack. Croce died just a few days before the release of his latest album, “I Got a Name”.

16. DEA agent NARC
The Drug Enforcement Administration (DEA) was set up in 1973 while President Nixon was in office.

17. 1958 film that won nine Oscars GIGI
In the lovely musical “Gigi”, released in 1958, the title song is sung by Louis Jourdan who plays Gaston. My favorite number though, has to be “Thank Heaven for Little Girls”
sung by Maurice Chevalier. Many say that “Gigi” is the last in a long line of great MGM musicals.

23. Fond du __, Wisconsin LAC
“Fond du lac” is French and translates as “bottom of the lake”, an apt name for the city of Fond du Lac, Wisconsin located at the foot of Lake Winnebago. If you like to play the lottery, you might want to stop off in Fond du Lac as there is a stretch of South Main Street called “Miracle Mile”. Back in 1993, someone bought a ticket there and won $100 million. Then in 2006, another store sold a ticket that won $209 million. These things always come in threes, so buy your tickets now …

27. Airport safety gp. TSA
The Transportation Security Administration (TSA) was of course created in 2001, soon after the 9/11 attacks.

29. Bible book following the Gospels ACTS
The Acts of the Apostles is the fifth book of the New Testament. It is believed that the author of the Gospel of Luke was the same person who wrote “Acts”.

34. Cheese on a ham sandwich SWISS
Swiss cheese is a relatively generic term, a type of cheese produced in various countries and not necessarily in Switzerland. What they all have in common is a resemblance to the original Swiss Emmental cheese.

37. Food truck order HOT DOG WITH CHILI
The full name for the dish that is often called simply “chili” is chili con carne, Spanish for “peppers with meat”. The dish was first created by immigrants from the Spanish Canary Islands in the city of San Antonio, Texas (a city which the islanders founded). The San Antonio Chili Stand was a popular attraction at the 1893 Chicago World’s Fair, and that stand introduced the dish to the rest of America and to the world.

40. Quarterback Manning ELI
Even I know that Eli Manning and his older brother Peyton are both quarterbacks!

41. Big name in air conditioning TRANE
The heating, ventilating and air conditioning (HVAC) company called Trane was formed in 1913 by father and son James and Reuben Trane. James was a Norwegian immigrant, and Reuben earned his mechanical engineering degree at the University of Wisconsin.

49. “Trinity” novelist Leon URIS
Leon Uris as an American writer. His most famous books are “Exodus” and “Trinity”, two excellent stories, in my humble opinion …

50. South American seaport VALPARAISO, CHILE
Valparaíso is an major seaport in Chile, although the city’s importance has waned somewhat since the opening of the Panama Canal.

58. Giraffe relative OKAPI
The okapi is closely related to the giraffe, although it does have markings on its legs and haunches that resemble those of a zebra. The okapi’s tongue is long enough to reach back and wash its eyeballs, and can go back even further to clean its ears inside and out.

59. Gulf War missile SCUD
Scud missiles were developed by the Soviet Union during the Cold War. The Soviets called them R-11 missiles at first, with later versions known as R-17 and R-300 Elbrus. The name “Scud” was actually the name NATO used for the missile, a name created by Western intelligence officers. Ballistic missiles haven’t been used a lot in actual warfare, the exception being the German V-2 rocket attacks on England during WWII. After the V-2, the second most-used ballistic missile in warfare is the Scud, which featured in a number of conflicts:

62. The Beatles’ “__ Comes the Sun” HERE
“Here Comes the Sun” is a song on the Beatles album “Abbey Road”. It is one of the few Beatles recordings that was written by George Harrison.

64. Hägar’s dog SNERT
Snert is the clever dog who belongs to Hägar the Horrible in the classic comic strip.

Down
1. Judge’s seat BANC
“Banc” is the French word for bench or seat.

2. Shaped like Obama’s office OVAL
Although there have been several “oval offices” used by US presidents in the White House, the current Oval Office was designed and constructed at the bequest of President Franklin D. Roosevelt. The room has four doors: one door opens onto the Rose Garden; a second door leads to a small study and dining room; a third opens onto the main corridor running through the West Wing; the fourth door opens to the office of the president’s secretary.

3. Celsius freezing point ZERO
Anders Celsius was a Swedish astronomer. The temperature scale that Celsius created was the reverse of that used today, with “zero” representing the boiling point of water and “100” representing water’s freezing point. This scale was “upended” (in 1744) just after Celsius died, by the Swedish botanist Carolus Linnaeus. The resulting temperature scale then became known as the centigrade scale for over 200 years, until in 1948 it was decided to adopt the “degree Celsius”. So, anyone still using “degrees centigrade” is actually way behind the times …

7. City NNW of Oklahoma City ENID
Enid, Oklahoma takes its name from the old railroad station around which the city developed. Back in 1889, that train stop was called Skeleton Station. An official who didn’t like the name changed it to Enid Station, using a character from Alfred Lord Tennyson’s “Idylls of the King”. Maybe if he hadn’t changed the name, the city of Enid would now be called Skeleton, Oklahoma! Enid has the nickname “Queen Wheat City” because is has a huge capacity for storing grain, the third largest grain storage capacity in the world.

9. Toyota until 2006 CELICA
The name “Celica” used by Toyota comes from the Latin “coelica” meaning “heavenly”.

12. Part of NASDAQ’s address NY, NY
The National Association of Securities Dealers (NASD) no longer exists per se. Since 2007, it’s functions are carried out by the Financial Industry Regulatory Authority (FINRA). These functions include regulation of trading in equities, bonds, futures and options. In 1971, the NASD set up a new computerized trading system called the NASD Automated Quotations stock market, a system we know better by the acronym NASDAQ.

30. Singer/dancer Rivera CHITA
Chita Rivera is an actress best known for her work in musical theater. She was honored with the Presidential Medal of Freedom in 2009.

31. Bloom from a bulb TULIP
We usually associate the cultivation of tulips with the Netherlands, but they were first grown commercially in the Ottoman Empire. The name “tulip” ultimately derives from the Ottoman Turkish word “tulbend” which means “muslin, gauze”.

38. Garson of “Mrs. Miniver” GREER
Greer Garson was a British actress who made a name for herself in Hollywood films in the forties. One of Garson’s most famous roles was playing the title character in the 1942 film “Mrs. Miniver”, starring alongside Walter Pidgen. Garson married a much younger man in 1943, the actor Richard Ney who played her son in “Mrs. Miniver”.

50. Lady __: Univ. of Tennessee team VOLS
The Tennessee Volunteers (the Vols) is the name given to the men’s sports teams at the University of Tennessee in Knoxville. The women’s teams are called the Lady Volunteers.

52. Bowler’s assignment LANE
Bowling has been around for an awfully long time. The oldest known reference to the game is in Egypt, where pins and balls were found in an ancient tomb that is over 5,000 years old. The first form of the game to come to America was nine-pin bowling, which had been very popular in Europe for centuries. In 1841 in Connecticut, nine-pin bowling was banned due to its association with gambling. Supposedly, an additional pin was added to get around the ban, and ten-pin bowling was born.

53. Tennis great Arthur ASHE
Arthur Ashe was a professional tennis player from Richmond, Virginia. In his youth, Ashe found himself having to travel great distances to play against Caucasian opponents due to the segregation that still existed in his home state. He was rewarded for his dedication by being selected for the 1963 US Davis Cup team, the first African American player to be so honored. Ashe continued to run into trouble because of his ethnicity though, and in 1968 was denied entry into South Africa to play in the South African Open. In 1979 Ashe suffered a heart attack and had bypass surgery, with follow-up surgery four years later during which he contracted HIV from blood transfusions. Ashe passed away in 1993 due to complications from AIDS. Shortly afterwards, Ashe was posthumously awarded the Presidential Medal of Freedom by President Bill Clinton.

56. Thailand neighbor LAOS
The official name for the country of Laos is the Lao People’s Democratic Republic. In the Lao language, the country’s name is “Meuang Lao”. The French ruled Laos as part of French Indochina, having united three separate Lao kingdoms. As there was a plural of “Lao” entities united into one, the French added the “S” and so today we tend to use “Laos” instead of “Lao”.