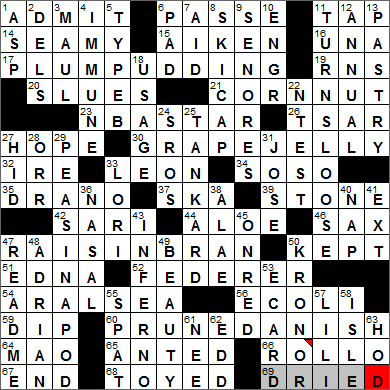 CROSSWORD SETTER: C.C. Burnikel
THEME: Dried Fruit … we have two pairs of themed answers with the first word of one answer being a fruit, and the first word of the other answer in the pair being the dried version of that fruit:

69A. Helped with dinner cleanup–or, a hint to the relationship between the starts of 60-/17-Across and 47-/30-Across DRIED

Today’s Wiki-est, Amazonian Googlies
Across
6. Behind the times PASSE
“Passé” is a French word, meaning “past, faded”.

14. Nasty SEAMY
We’ve used “seamy” to mean “the least pleasant, the worst” since the 1600s. The idea comes from the seamed side of a sewn garment being the less attractive.

15. Idol whose fans are called Claymates AIKEN
Clay Aiken is one of the singing stars discovered on “American Idol”. Aiken had filled out an application to appear on the show “Amazing Race”, but a friend persuaded him to try out for “American Idol” instead. Fans of Clay Aiken call themselves “Claymates”.

16. Acapulco article UNA
The Mexican city of Acapulco is on the southwest coast of the country, in the state of Guerrero. The name “Acapulco” translates from the local language into “at the big reeds”.

17. Traditional Christmas dessert PLUM PUDDING
The traditional English Christmas dessert called plum pudding doesn’t actually contain any plums. But I wouldn’t say that the pudding is misnamed because it contains raisins, which is what the English used to call “plums”.

21. Crunchy snack CORN NUT
Corn nuts are kernels of corn that have been soaked in water for three days and then deep-fried in oil.

23. LeBron James, e.g. NBA STAR
LeBron James plays basketball for the Miami Heat. James seems to be in demand for the covers of magazines. He became the first African American man to adorn the front cover of “Vogue” in March 2008. That made him only the third male to make the “Vogue” cover, following Richard Gere and George Clooney.

26. Ruler in old St. Petersburg TSAR
The term czar (also tsar) is a Slavic word that was first used as a title by Simeon I of Bulgaria in 913 AD. “Czar” is derived from the word “Caesar”, which was synonymous with “emperor” at that time.

27. __ Diamond HOPE
The Hope Diamond is a very large diamond (45.52 carats) that is a deep blue color due to trace amounts of boron found within the crystal structure. The diamond has quite a history, the legend being that in its original (larger) form it was the eye in a sculpted statue of a Hindu god. It passed through a number of hands, being recut at least twice, and in the 19th century ended up in the collection of an Anglo-Dutch banker called Henry Philip Hope, whose name is currently used for the gem. Eventually it fell into the hands of a New York diamond merchant called Harry Winston who agreed to donate it to the Smithsonian. To deliver the diamond to its new owners, Winston popped the gem into a plain brown paper bag and sent it through the US Mail.

33. Red Army leader Trotsky LEON
Leon Trotsky was a Soviet politician and revolutionary, the founder and first leader of the Red Army as well as one of the first members of the Politburo. Trotsky was ousted and deported in 1929 when he opposed the policies of Joseph Stalin. Trotsky continued to be vocal in opposition to Stalin in Mexico, his place of exile. Stalin had him assassinated there in 1940.

35. Liquid-Plumr rival DRANO
To clean out drains we might buy Crystal Drano which is sodium hydroxide (lye) mixed with sodium nitrate, sodium chloride (table salt) and aluminum. The contents of Drano work in concert to clear the clog. The lye reacts with any fats creating soap which may be enough to break up the clog. Also, the finely-divided aluminum reacts with water creating tremendous heat so that that mixture boils and churns, then any hair or fibers are cut by the sharp edges of the nitrate and chloride crystals. Having said all that, I find that boiling water poured down the drain almost always does the job …

37. Jamaican music genre SKA
Ska originated in Jamaica in the late fifties and was the precursor to reggae music. No one has a really definitive etymology of the term “ska”, but it is likely to be imitative of some sound.

42. Bollywood dress SARI
Bollywood is the informal name given to the huge film industry based in Mumbai in India. The term “Bollywood” is a melding of “Bombay”, the old name for Mumbai, and of course “Hollywood”.

44. Face cream ingredient ALOE
Aloe vera has a number of alternate names that are descriptive of its efficacy as a medicine. These include the First Aid plant, Wand of Heaven, Silent Healer and Miracle Plant.

46. Kenny G plays one SAX
Saxophonist Kenny G’s full name is Kenneth Bruce Gorelick. Kenny’s “G” might also stand for “golfer”, as in 2006 he was ranked by “Golf Digest” magazine as the number one golfer working in the field of music.

51. “Show Boat” novelist Ferber EDNA
“Show Boat” is a musical by Jerome Kern and Oscar Hammerstein, first staged in New York in 1927. It is based on a 1926 novel of the same name by Edna Ferber. The story is about a show boat called the “Cotton Blossom”. Show boats were floating theaters which navigated the rivers of the US from the 1870s to the 1930s, moving from town to town with the performers living on board.

52. Roger with 17 Grand Slam wins FEDERER
Roger Federer is a Swiss tennis player considered by many to be the greatest tennis player of all time.

54. Shrinking Asian lake ARAL SEA
The Aral Sea is a great example of how man can have a devastating effect on his environment. In the early sixties the Aral Sea covered 68,000 square miles of Central Asia. Soviet Union irrigation projects drained the lake to such an extent that today the total area is less than 7,000 square miles, with 90% of the lake now completely dry. Sad …

56. Scary bacteria E COLI
Escherichia coli (E. coli) are usually harmless bacteria found in the human gut, working away quite happily. However, there are some strains that can produce lethal toxins. These strains can make their way into the food chain from animal fecal matter that comes into contact with food designated for human consumption.

64. “Little Red Book” chairman MAO
During China’s Cultural Revolution, the Communist Party published a book of statements and writings from Chairman Mao Zedong. Here in the West the publication is usually referred to as “The Little Red Book”.

66. Comics friend of Nancy ROLLO
“Nancy” is a comic strip that was originally called “Fritzi Ritz” when it first appeared in 1938. Nancy Ritz is a mischievous young girl, and Rollo is a friendly rich kid.

Down
1. Dangerous reptile in the Nile delta ASP
The asp is a venomous snake found in the Nile region of Africa. It is so venomous that the asp was used in ancient Egypt and Greece as a means of execution. Cleopatra observed such executions noting that the venom brought on sleepiness without any painful spasms. When the great queen opted to commit suicide, the asp was therefore her chosen method.

5. Laid-back sort TYPE B
The Type A and Type B personality theory originated in the fifties. Back then, individuals were labelled as Type A in order to emphasize a perceived increased risk of heart disease. Type A personality types are so called “stress junkies”, whereas Type B types are relaxed and laid back. But there doesn’t seem to be much scientific evidence to support the linkage between the Type A personality and heart problems.

6. Push-up bra feature PAD
The word “brassière” is of course French in origin, but it isn’t the word the French use for a “bra”. In France what we call a bra is known as a “soutien-gorge”, translating to “held under the neck”. The word “brassière” is indeed used in France but there it describes a baby’s undershirt, a lifebelt or a harness. “Brassière” comes from the Old French word for an “arm protector” in a military uniform (“bras” is the French for “arm”). Later “brassière” came to mean “breastplate” and from there the word was used for a type of woman’s corset. The word jumped into English around 1900.

9. Men of La Mancha SENORES
La Mancha is a region in Spain, a plateau lying south of Madrid. The area became famous after publication of the novel “Don Quixote de La Mancha” by Miguel de Cervantes.

22. Explosive experiment N-TEST
Operation Crossroads was the codename of a series of US nuclear weapons tests at Bikini Atoll in the middle of 1946. The tests used A-bombs and were designed to measure the effect of blasts on navy vessels. There were three tests planned, but the third had to be cancelled as the Navy couldn’t decontaminate the ships used in the second test.

28. NHL legend Bobby ORR
Bobby Orr is regarded as one of the greatest hockey players who ever played the game. By the time he retired in 1978, Orr had undergone over a dozen knee surgeries. At 31 years of age, Orr concluded that he just couldn’t skate anymore. Reportedly, he was even having trouble walking …

33. “Tank Girl” star Petty LORI
Lori Petty is the actress who played the character Kit Keller in the fabulous movie “A League of Their Own”. Petty also played the title role in a 1995 science fiction film called “Tank Girl”.

45. No right __: traffic sign ON RED
If you’re sitting behind a car that doesn’t make a right on red, it may just be a rental car driven by someone from Europe. Speaking as someone who learned to drive over there, I must admit I held up a few people at red lights when I first visited this country. That’s because in Europe we aren’t allowed to make any move past a red light, unless there is an accompanying green arrow. So, if you’re driving over in Europe, take care …

50. Swedish currency KRONOR
“Krona” translates in English as “crown”, and is the currency of Sweden. As a member of the European Union, Sweden is required to adopt the euro as its official currency. Such a move isn’t really popular in Sweden and so the Swedish government has been using a legal loophole to allow the country to retain the krona.

57. Taylor of “Mystic Pizza” LILI
The actress Lili Taylor had supporting roles in films like “Mystic Pizza”, “The Haunting” and “Rudy”, and she had a recurring role in the HBO series “Six Feet Under”.

61. Alumna bio word NEE
“Née” is the French word for “born” when referring to a female. The male equivalent is “né”.

An “alumnus” (plural … alumni) is a graduate or former student of a school or college. The female form is “alumna” (plural … alumnae). The term comes into English from Latin, in which alumnus means foster-son or pupil.