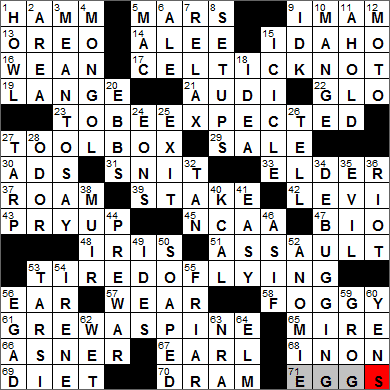 CROSSWORD SETTER: Jennifer Nutt
THEME: Debugging … there are some “bugs” buried in each of today’s theme answers:

34D. Correcting, in a way … or what would need to be done to remove the things hidden in the answers to starred clues? DEBUGGING

Today’s Wiki-est, Amazonian Googlies
Across
1. Jon of “Mad Men” HAMM
Jon Hamm lived the life of a struggling actor for quite some time before he hit gold with the starring role in the AMC drama “Mad Men”. He plays the main character, advertising executive (and man about town), Don Draper. I am told by my wife and female friends, that he is quite good looking. I don’t see it myself …

5. Site of the volcano Olympus Mons MARS
Olympus Mons is Latin for “Mount Olympus” and is a large volcano on the planet Mars. Olympus Mons is about 14 miles in height, making it the tallest mountain on any planet in our solar system.

9. Mosque official IMAM
An imam is a Muslim leader, often the person in charge of a mosque or perhaps a Muslim community.

13. Double Stuf treat OREO
Double Stuf Oreo was introduced in 1975, and it has twice the normal amount of white cream filling as the original cookie.

14. Downwind ALEE
“Alee” is the direction away from the wind. If a sailor points into the wind, he or she is pointing “aweather”.

15. Hells Canyon is on its western border IDAHO
Hells Canyon in the northwestern US is the deepest river gorge in the country. The river that carved out the canyon is the Snake River, itself a tributary of the Columbia.

42. Retailer Strauss LEVI
Levi Strauss was the founder of the first company in the world to manufacture blue jeans. Levi Strauss & Co. opened in 1853 in San Francisco. Strauss and his business partner were awarded a patent in 1873 for the use of copper rivets to strengthen points of strain on working pants.

45. Org. with bowls NCAA
The National Collegiate Athletic Association (NCAA) dates back to the Presidency of Theodore Roosevelt. When his son broke his nose playing football at Harvard, President Roosevelt turned his attention to the number of serious injuries and even deaths occurring in college sports. He instigated meetings between the major educational institutions leading to the formation of the Intercollegiate Athletic Association of the United States (IAAUS) in 1906, which was given the remit of regulating college sports. The IAAUS became the NCAA in 1910.

47. Chem cousin BIO
The science of chemistry is a “cousin” of biology.

48. Rainbow goddess IRIS
In Greek mythology the goddess Iris was viewed as the link between the gods and humanity, a messenger. She was also the goddess of the rainbow.

66. Voice of the difficult homeowner in “Up” ASNER
“Up” is the tenth movie released by Pixar studios, featuring wonderful animation as we have come to expect from Pixar. The film earned itself two Academy Awards. The main voice actor is Ed Asner, whose animated persona as Carl Fredricksen was created to resemble Spencer Tracy in his last film, “Guess Who’s Coming to Dinner”.

67. Chief Justice Warren EARL
Earl Warren served as Governor of California from 1943 to 1953 and as US Chief Justice from 1953 until 1969. Earlier in his career, Warren served as district attorney for Alameda County in California, where I happen to be right now writing this post. Warren lent his name to the Warren Commission that he chaired, which investigated the assassination of President Kennedy.

70. Apothecary’s measure DRAM
In the obsolete apothecary’s system of weights, one dram is equivalent to 60 grains, or three scruples.

71. Soufflé essentials EGGS
A soufflé is of course a French dish, usually served as a dessert. The verb “souffler” means “to blow, blow up”.

Down
4. Genghis Khan, notably MONGOL
Genghis Khan was the founder of the Mongol Empire, destined to be the largest contiguous empire in the history of the world. He initially built his empire by uniting nomadic tribes of northeast Asia, but once Genghis Khan had consolidated his position he initiated Mongol invasions throughout Eurasia. At it’s height, the Mongol Empire stretched from the River Danube to the Sea of Japan.

5. Jobs creation MAC
Macintosh (also “Mac”) is a line of computers from Apple Inc. The first Mac was introduced in 1984, and I remember someone showing me one at work in those early days of personal computing. There was a piece of white plastic connected to the main computer by a cord, and I was amazed when the guy showed me that it controlled where the cursor was on the screen. My colleague told me that this lump of plastic was called “a mouse” …

Steve Jobs certainly was a business icon in Silicon Valley. I don’t think it is too surprising to learn that the brilliant Jobs didn’t even finish his college education, dropping out of Reed College in Oregon after only one semester. Steve Jobs co-founded Apple in 1976, but in 1985 he was basically fired from his own company during the computer sales slump of the mid-eighties. Jobs then founded NeXT Computer, a company focused on supplying workstations to the higher education and business markets. Apple purchased NeXT in 1996, and that’s how Jobs found himself back with his original company.

6. Sierra Nevada, e.g. ALE
The Sierra Nevada Brewing Company is powered almost exclusively by solar energy, and even has a charging station for electric vehicles at its brewery. The company also uses the cooking oil from its restaurant as biodiesel for its delivery trucks. Discarded yeast is used to make ethanol fuel, and spent grain is used as food for livestock. For its efforts to preserve the environment, Sierra Nevada won the EPA’s “Green Business of the Year” award for 2010.

10. Itchy canine ailment MANGE
Mange is a skin disorder in animals caused by parasitic mites that embed themselves in the skin, perhaps living in hair follicles. The same disorder in humans is called scabies.

12. Fictional detective skilled in judo MOTO
The mysterious Mr. Moto is a Japanese secret agent who appears in six novels by American author, John P. Marquand. Mr. Moto was famously played by Peter Lorre in a series of eight films released in the 1930s.

26. Spill the beans TELL
“To spill the beans” is to divulge a secret. The expression first appeared in American English, in the early 1900s. The phrase arose as an alternative to “spoil the beans” or “upset the applecart”.

27. Protective cover TARP
Originally, tarpaulins were made from canvas covered in tar that rendered the material waterproof. The word “tarpaulin” comes from “tar” and “palling”, with “pall” meaning “heavy cloth covering”.

34. Correcting, in a way … or what would need to be done to remove the things hidden in the answers to starred clues? DEBUGGING
Back in 1947, the famed computer programmer Grace Hopper noticed some colleagues fixing a piece of equipment by removing a dead moth from a relay. She remarked that they were “debugging” the system, and so she has been given credit for popularizing the term.

38. Naturalist John MUIR
John Muir was a famous American naturalist, although he was born in Scotland. Muir published “My First Summer in the Sierra” in 1911, describing one of his favorite places in the country, the Sierra Nevada range in California. He was co-founder of the Sierra Club.

52. Breakdown of social norms ANOMIE
The word “anomie” comes to us via French from Greek. The root words are “a-” (without) “nomos” (law).

53. Ankle bones TARSI
The tarsals (also “tarsi”) are the ankle bones, equivalent to the carpals in the wrist.

54. Damaging 2011 East Coast hurricane IRENE
Hurricane Irene caused extensive flooding in 2011 as it travelled through the Caribbean, up the East Coast of the United States and into the Atlantic seaboard of Canada. The hurricane was unusual in that it came so far up north. Fifty-five deaths were attributed to Irene.

55. Tuck’s title FRIAR
Friar Tuck is a character who appears in the legends of Robin Hood. Tuck is a jovial man, found of his food and wine, and a member of Robin’s merry band of outlaws.

56. “Zounds!” EGAD
“Egad” developed as a polite way of saying “oh God” in the late 1600s and is an expression of fear or surprise somewhat like “good grief!”.

59. Pirate’s brew GROG
Edward Vernon was a naval officer with the nickname “Old Grog”. In 1740, Vernon ordered that the daily ration of rum for his sailors should be watered down, in order to reduce discipline problems caused by drunkenness. The diluted rum was sweetened with sugar, and lemon or lime added to help preserve it on long voyages. This recipe, found to reduce scurvy among sailors (because of the citrus) spread throughout the Royal Navy, and “grog” was born.

60. Longings YENS
The word “yen”, meaning “urge”, has been around in English since the very early 1900s. It comes from the earlier word “yin” imported from Chinese, which was used in English to describe an intense craving for opium!

63. Second Amendment backer: Abbr. NRA
The National Rifle Association (NRA) used the slogan “I’ll give you my gun when you pry it from my cold, dead hands”. These words became quite famous when they were used at an NRA convention in 2000 by Charlton Heston, who was then president of the NRA. Heston ended a speech he made with the words “From my cold, dead hands!” while holding up into the air a replica of a Sharps rifle.

The Second Amendment of the US Constitution was adopted in 1791 as part of the Bill of Rights. The actual text of the amendment is:

64. Slippery __ ELM
The inner bark of the slippery elm can used in a medicinal tea. Elm bark tea is said to ease a sore throat or irritated stomach.

For the sake of completion, here is a full listing of all the answers:
Across
1. Jon of “Mad Men” HAMM
5. Site of the volcano Olympus Mons MARS
9. Mosque official IMAM
13. Double Stuf treat OREO
14. Downwind ALEE
15. Hells Canyon is on its western border IDAHO
16. Switch from a bottle to a cup, say WEAN
17. *Design pattern on some Irish crosses CELTIC KNOT
19. “Migrant Mother” photographer Dorothea __ LANGE
21. Q7 automaker AUDI
22. Mop & __ GLO
23. *Not surprising TO BE EXPECTED
27. Carpenter’s accessory TOOLBOX
29. Event in many 30-Across SALE
30. Newspaper inserts ADS
31. Tizzy SNIT
33. Church leader ELDER
37. Stray ROAM
39. Monetary interest STAKE
42. Retailer Strauss LEVI
43. Use a lever on, as a floorboard PRY UP
45. Org. with bowls NCAA
47. Chem cousin BIO
48. Rainbow goddess IRIS
51. Battery partner ASSAULT
53. *Ready to come clean TIRED OF LYING
56. Place for a ring EAR
57. Have on WEAR
58. Vague FOGGY
61. *Got some gumption GREW A SPINE
65. Bog down MIRE
66. Voice of the difficult homeowner in “Up” ASNER
67. Chief Justice Warren EARL
68. Told about, as a secret IN ON
69. Try to lose DIET
70. Apothecary’s measure DRAM
71. Soufflé essentials EGGS