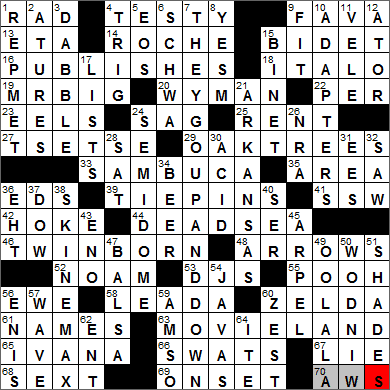 CROSSWORD SETTER: Ian Livengood
THEME: They Go Up and Down … the vertical answers at the extreme left and extreme right of the grid are in two columns, and the adjacent answers are read UP and DOWN:

7A. What the six puzzle answers graphically represented in this puzzle have in common THEY GO UP AND DOWN

Today’s Wiki-est, Amazonian Googlies
Across
13. Sorority character ETA
Eta is the seventh letter of the Greek alphabet, and is a forerunner of our Latin character “H”.

14. Drug giant behind Valium and Klonopin ROCHE
The giant pharmaceutical and medical diagnostics company Hoffmann-La Roche is based in Basel, Switzerland. The company was founded back in 1896 by Fritz Hoffmann-La Roche, and initially produced vitamins.

15. Posh bathroom fixture BIDET
“Bidet” is of course a French word that we imported into English. In French, the word “bidet” originally described a small horse or a pony. What we know as a bidet was so called because one can straddle it like a horse in order to use it.

18. “If on a winter’s night a traveler” writer Calvino ITALO
As well as being an author, Italo Calvino was a famous Italian journalist. He was a supporter of communism and so wasn’t very popular in the US nor in Britain.

19. Top banana MR BIG
The expression “top banana” is used to mean “the main guy” or “Mr. Big”. The first person to use “top banana” was supposedly Vaudeville performer Harry Steppe in 1927, who applied it to the top comic on the bill. The phrase comes from a comedy routine in which three comics struggle to share two bananas.

20. Longtime Rolling Stones bassist Bill WYMAN
Bill Wyman was one of the first members of the Rolling Stones, joining in 1962 and staying with the band until 1992. Wyman is multi-talented. As well as having played bass guitar with the Stones, he is a very talented photographer whose work has been shown in many galleries around the world. He is also an amateur archaeologist, and markets his own design of metal detector for the amateur relic hunter.

23. Sushi options EELS
Sushi is a Japanese dish that has as its primary ingredient cooked, vinegared rice. The rice is usually topped with something, most often fish, and can be served in seaweed rolls. If you want raw fish by itself, then you have to order “sashimi”.

27. Fly out of Africa? TSETSE
Tsetse flies live on the blood of vertebrate mammals. The name “tsetse” comes from Tswana, a language of southern Africa, and translates simply as “fly”. Tsetse flies are famous for being carriers of the disease known as “sleeping sickness”. Sleeping sickness is caused by a parasite which is passed onto humans when the tsetse fly bites into human skin tissue. If one considers all the diseases transmitted by the insect, then the tsetse fly is responsible for a staggering quarter of a million deaths each year.

33. Liqueur made from elderflowers SAMBUCA
Sambuca is an Italian liqueur that is flavored with anise. It is often served straight up with three coffee beans floating on the surface. The beans are said to represent health, happiness and prosperity. A more “saucy” representation for the beans is the husband, wife and mistress.

36. O staff, briefly EDS
The full name of the publication usually called “O”, is “O: The Oprah Magazine”. Since the magazine’s founding in 2000, Oprah has appeared alone on the cover of each issue, with two exceptions. On the April 2009 cover Oprah was shown with First Lady Michelle Obama, and on the December 2009 cover Oprah shared the limelight with Ellen DeGeneres.

39. Cravat holders TIEPINS
The cravat originated in Croatia and was an accessory used with a military uniform. Cravats were introduced to the fashion-conscious French by Croatian mercenaries enlisted into a regiment of the French army. The English placed a lot of emphasis on the knot used for the cravat, and in the period after the Battle of Waterloo the cravat came to be known as a “tie”. What we now call a tie in English is still called a “cravate” in French.

44. Scroll source DEAD SEA
The Dead Sea Scrolls were discovered over a period of years, between 1947 and 1956, in eleven caves on the shores of the Dead Sea. The scrolls are believed to have been written by an ancient Jewish sect called the Essenes, although this has been called into question recently. Many of the texts are copies of writings from the Hebrew Bible.

52. Linguist Chomsky NOAM
Noam Chomsky is a professor of linguistics at MIT. Chomsky is known as one of the fathers of modern linguistics.

53. Headphone wearers, usually DJS
The world’s first radio disk jockey was one Ray Newby of Stockton, California who made his debut broadcast in 1909, would you believe? When he was 16 years old and a student, Newby started to play his records on a primitive radio located in the Herrold College of Engineering and Wireless in San Jose. The records played back then were mostly recordings of Enrico Caruso.

65. The Donald’s first IVANA
Ivana Winklmayr was born in Czechoslovakia. She was an excellent skier, and was named as an alternate for the 1982 Czech Olympic Team. She was promoting the Montreal Olympics in New York in 1976 when she met Donald Trump. Ivana and Donald’s marriage was very public and well-covered by the media, but not nearly so well as their very litigious divorce in 1990.

68. Canonical hour SEXT
“Sext” is an ecclesiastical term that describes the sixth hour after dawn, or noon. “Sexta” is Latin for “sixth”.

Down
5. Goddess of the morning EOS
In Greek mythology, Eos is the goddess of the dawn, who lived at the edge of the ocean. She would wake each morning to welcome her brother Helios the sun. The Roman equivalent of Eos is Aurora.

6. Unstressed vowel sound SCHWA
A “schwa” is an unstressed and toneless vowel found in a number of languages including English. Examples from our language are the “a” in “about”, the “e” in “taken” and the “i” in pencil.

10. Aids for a bad 8-Down ADAPTERS
I am not sure how this answer matches the clue …

15. IQ test pioneer BINET
The first usable intelligence test was invented by a French psychologist named Alfred Binet. Binet collaborated with Théodore Simon and together they produced the Binet-Simon Intelligence Scale that is still in use today for IQ tests.

21. Where Hope may be found ARKANSAS
Hope, Arkansas is the hometown of two famous former Governors of the state: President Bill Clinton and presidential candidate Mike Huckabee.

24. Feature of some apses SEMIDOME
The apse of a church or cathedral is a semicircular recess in an outer wall, usually with a half-dome as a roof and often where there resides an altar. Originally apses were used as burial places for the clergy and also for storage of important relics.

26. Gp. with many hunters NRA
The National Rifle Association (NRA) used the slogan “I’ll give you my gun when you pry it from my cold, dead hands”. These words became quite famous when they were used at an NRA convention in 2000 by Charlton Heston, who was then president of the NRA. Heston ended a speech he made with the words “From my cold, dead hands!” while holding up into the air a replica of a Sharps rifle.

36. Financial index EHT
37. – DOW (THE-DOW)
Dow Jones & Company was founded as a publishing house in 1882 by three newspaper reporters, Charles Dow, Edward Jones and Charles Bergstresser. Today, the company’s most famous publication has to be “The Wall Street Journal”. In 1884, Charles Dow started reporting the average dollar value of the stock of eleven companies, an index which spawned a whole host of metrics that carry the Dow Jones name to this day, including the renowned Dow Jones Industrials.

43. Roxy Music alum ENO
Brian Eno started out his musical career with Roxy Music. However, Eno’s most oft-played composition (by far!) is Microsoft’s “start-up jingle”, the 6-second sound you hear when the Windows operating system is booting up. Eno might have annoyed the Microsoft folks when he stated on a BBC radio show:
I wrote it on a Mac. I’ve never used a PC in my life; I don’t like them.

45. Adrien of cosmetics ARPEL
The Adrien Arpel cosmetic company was founded in 1962 and sold its products across Europe. The company started selling in the US in 1968.

47. Hobbyist’s wood BALSA
Balsa is a very fast growing tree that is native to parts of South America. Even though balsa wood is very soft, it is actually classified as a hardwood, the softest of all the hardwoods (go figure!). Balsa is light and strong, so is commonly used in making model airplanes and rafts. Amazingly, in WWII a full-size British plane, the de Havilland Mosquito, was built largely from balsa and plywood. No wonder they called it “The Wooden Wonder” and “The Timber Terror”.

54. Diner cupfuls JAVAS
Back in 1850, the name “java” was given to a type of coffee grown on the island of Java, and the usage of the term spread from there.

56. Oscillating curve ENIS
57. – WAVE (SINE-WAVE)
A sine wave is a mathematical function that describes a simple, smooth, repetitive oscillation. The sine wave is found right throughout the natural world. Ocean waves, light waves and sound waves all have a sine wave pattern.