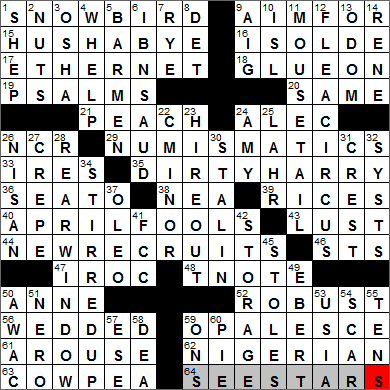 16. Legendary Irish princess ISOLDE
According to Arthurian legend, Iseult (also “Isolde”) was the adulterous lover of Sir Tristan, one of the Knights of the Round Table. Iseult was an Irish Princess who fell in love with Tristan who was sent to win Iseult’s hand in marriage for King Mark of Cornwall. The tale was used as the basis for Richard Wagner’s celebrated opera “Tristan und Isolde”.

17. Modern means of connecting ETHERNET
Ethernet is the name given to a standardized configuration of local area networks (LANs). An ethernet cable is that one that has a connector on the end that looks like a regular telephone connector, but is about twice as wide. Ethernet dates back to the mid seventies, when it was developed by the Xerox Corporation.

19. Job follow-up? PSALMS
The Greek word “psalmoi” originally meant “songs sung to a harp”, and gave us the word “psalms”.

24. “Island in the Sun” novelist Waugh ALEC
Alec Waugh was the older brother of the more famous Evelyn Waugh. Both were successful novelists (Evelyn of “Brideshead Revisited” fame), but what I like about Alec is that he supposedly invented the cocktail party. He invited his friends around “for tea” in the twenties, and served them all rum swizzles instead!

26. ATM initials NCR
NCR is an American company that has been in business since 1884, originally called the National Cash Register Company. The company has done well in a market where new technologies seem to be constantly disrupting the status quo.

29. Study of change? NUMISMATICS
A numismatist is a coin collector. The term “numismatics” comes into English via French from a Latin word for coin: “nomisma”.

36. Defunct defense gp. SEATO
The Southeast Asia Treaty Organization (SEATO) was set up in 1954, a defense organization with the mission to block communist influence growing in Southeast Asia. The driving force behind the organization’s creation was President Eisenhower’s Secretary of State, John Dulles. The list of SEATO members included Australia, France, the Philippines, the UK and the US. The organization was never really considered effective and it fell apart in 1977 largely due to a lack of interest by the members.

38. Cultural prog. funder NEA
The National Endowment for the Arts (NEA) is an agency funded by the federal government that offers support and financing for artistic projects. The NEA was created by an Act of Congress in 1965. Between 1965 and 2008, the NEA awarded over $4 billion to the arts, with Congress authorizing around $170 million annually through the eighties and much of the nineties. That funding was cut to less than $100 million in the late nineties due to pressure from conservatives concerned about the use of funds, but it is now back over the $150 million mark. I wonder how long that will last though …

40. Some annual victims APRIL FOOLS
April Fool’s Day is celebrated on April 1st in the western world. In the US (and Ireland) one can make practical jokes all day long if one wants. But in the UK there is a noon deadline. Anyone pranking after midday is called an “April Fool”.

47. __-Z: collectible Camaro IROC
The IROC-Z is a model of Camaro, introduced in 1978. The IROC-Z takes its name from a famous stock car race, the International Race of Champions.

48. Govt. issue T-NOTE
A Treasury note (T-Note) is a government debt that matures in 1-10 years. A T-Note has a coupon (interest) payment made every six months. The T-note is purchased at a discount to face value, and at the date of maturity can be redeemed at that face value. A T-Bill is a similar financial vehicle, but it matures in one year or less, and a T-Bond matures in 20-30 years.

50. Last Stuart queen ANNE
The Royal House of Stewart (also Stuart) came to power in Scotland in the late 14th century, starting with Robert II of Scotland. The Stewarts extended their power to England and Ireland when the Tudor line became extinct as Queen Elizabeth I died without issue. James VI of Scotland became James I of England at that time. The last Stewart monarch was Anne, Queen of Great Britain who also died without issue, despite going through seventeen pregnancies. Assuming Prince William, Duke of Cambridge becomes the British Monarch one day, then there will be a Stewart descendant on the throne again. William is the son of Diana, Princess of Wales, and Diana was descended from the Stewart monarchs.

59. Shimmer with color OPALESCE
An opal is often described as having a milky iridescence, known as “opalescence”.

62. Novelist Chinua Achebe, by birth NIGERIAN
Nigerian novelist Chinua Achebe was born in the Igbo region in the south of the country. His first novel was “Things Fall Apart”, a book that has the distinction of being the most widely read in the whole of African literature.

63. Southern legume COWPEA
One of the best known subspecies of cowpea is the black-eyed pea.

3. Org. concerned with whistleblower laws OSHA
The Occupational Safety and Health Administration (OSHA) was created in 1970 during the Nixon administration. OSHA regulates workplaces in the private sector and regulates just one government agency, namely the US Postal Service.

6. 1930s-’50s Arabian monarch IBN SAUD
The Kingdom of Saudi Arabia is the largest Arab country in the Middle East and is the world’s largest oil producer, home to the world’s largest oil reserves. The Saudi dynasty started in central Arabia in 1744 when the secular leader Muhammad ibn Saud joined forces with the Islamic scholar and Imam, Muhammad ibn Abd-al-Wahhab. At the time, Saud was a ruler of a town near Riyadh and he was determined to bring “true” Islam to the Arabian peninsula. Since 1744 the fortunes of the Saudi family have risen and fallen, but it is that same family who rules what we know today as Saudi Arabia.

9. Bailed-out insurance co. AIG
AIG is the American International Group, a giant insurance corporation (or I should say, “was”). After repeated bailouts by American taxpayers, the company made some serious PR blunders by spending large amounts of money on executive entertainment and middle management rewards. These included a $444,000 California retreat, an $86,000 hunting trip in England, and a $343,000 getaway to a luxury resort in Phoenix. Poor judgment, I’d say …

10. Easter, for one: Abbr. ISL
Rapa Nui is the Polynesian name for what we are more likely to call Easter Island. The European name was given to the island by the Dutch explorer Jacob Roggeveen, who came across it on Easter Sunday in the year 1722. Easter Island is inhabited, and is a location that is remarkably distant from neighboring civilization. The nearest inhabited island is Pitcairn Island, almost 1300 miles away.

13. NBA forward Lamar __ ODOM
Lamar Odom is a basketball forward playing for the LA Clippers. Apparently Odom loves candy, and that’s how he earned his nickname, “The Candy Man”. Odom is married to Khloé Kardashian, and the couple’s wedding featured on an episode of the reality show “Keeping Up with the Kardashians”. Not a show that I have ever seen …

14. Actress Russo RENE
The lovely and very talented actress Rene Russo is a native of Burbank, California. Russo went to highschool (with actor/director Ron Howard), but dropped out in tenth grade. At seventeen, she was given the opportunity to train as a model and within a very short time appeared on the cover of “Vogue”. As her modelling jobs slowed down in her early thirties, Russo made a career change and studied theater and acting. I am so glad she did, as Rene Russo is one of my favorite actresses …

22. Key of Beethoven’s Fifth C-MINOR
If I had to name which of Beethoven’s symphonies I listen to most often, at the top of the list comes the 7th followed closely by the 9th, and then the 5th a little further down. But that four-note opening of the 5th … that is superb …

24. March of fiction AMY
“Little Women” is of course a novel written by American author Louisa May Alcott. The quartet of little women is Meg, Jo, Beth and Amy March. Jo is a tomboy and the main character in the story and is based on Alcott herself.

25. “If I Were King of the Forest” singer LAHR
Bert Lahr’s most famous role was that of the cowardly lion in “The Wizard of Oz”. Lahr had a long career in burlesque, vaudeville and on Broadway. Remember the catch phrase made famous by the cartoon character Snagglepuss, “Heavens to Murgatroyd!”? Snagglepuss stole that line from a 1944 movie called, “Meet the People” in which it was first uttered by none other than Bert Lahr.

26. Month after Adar NISAN
Nisan is the first month in the Hebrew ecclesiastical calendar, the month in which Passover falls.

30. Yalta conferee STALIN
Joseph Stalin was Soviet Premier from 1941 to 1953. Stalin’s real name was Ioseb Besarionis dze Jughashvili. Not long after the Bolshevik Revolution of 1903 he adopted the name “Stalin”, which is the Russian word for “steel”.

The Yalta Conference was a wartime meeting between WWII leaders Franklin D. Roosevelt, Winston Churchill and Joseph Stalin. Held in February of 1945, the conference is most remembered for decisions made on the post-war organization of Europe. To a large extent, the three leaders made decisions carving up influence around the world that has had implications to this day.

37. Dairy case item OLEO
Emperor Louis Napoleon III of France announced a competition to develop a substitute for butter, a substitute that would be more accessible to the lower classes and more practical for the armed forces. In 1869, a French chemist called Hippolyte Mege-Mouries came up with something that he called oleomargarine, which was eventually manufactured under the trade name “margarine”. The name “oleomargarine” also gives us our generic term “oleo”.

41. TV monitor FCC
TV broadcasting is monitored by the Federal Communications Commission (FCC). The FCC has been around since 1934, when it replaced the Federal Radio Commission.

49. 1975 Pulitzer winner for criticism EBERT
Roger Ebert co-hosted a succession of film review television programs for over 23 years, most famously with Gene Siskel until Siskel passed away in 1999. Ebert was diagnosed and treated for thyroid cancer in 2002, and since then has undergone a number of surgical procedures. Sadly he has lost his voice, but continues work as a film critic, focusing these days on the print medium.

51. Poppaea’s husband NERO
The emperor Nero had quite the family life. When Nero was just 16-years-old he married his stepsister, Claudia Octavia. He also had his mother and stepbrother executed.

Poppaea Sabina was the second wife of the Emperor Nero. Poppaea was an ambitious and ruthless woman by all accounts.

53. Former VOA overseer USIA
The United States Information Agency (USIA) was established under President Eisenhower in 1953, and continued operating until 1999. It’s mission was “public diplomacy”, another term for propaganda broadcast over radio airwaves. The intent from day one was to avoid having the broadcasts identified as propaganda, and speaking as a former listener to the USIA’s Voice of America (VOA) over in Europe, there were a lot of fun programs that had one coming back to hear more, but we all knew it was propaganda quite frankly …

55. Second place? TENS
The first place in our numbering system is the “ones”, the second is the “tens”, and the third is the “hundreds”.

58. Traffic reporter?: Abbr. DEA
The Drug Enforcement Administration (DEA) was set up in 1973 while President Nixon was in office.