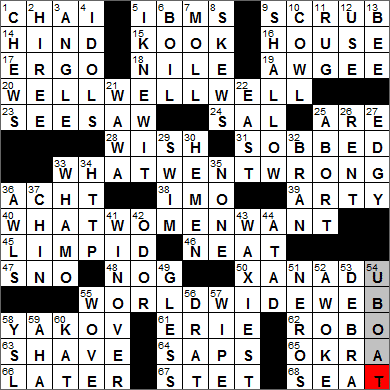 20A. “Just lookee here” WELL WELL WELL
33A. “But it was working when I left!” WHAT WENT WRONG??!!
40A. 2000 Mel Gibson film WHAT WOMEN WANT
55A. Information superhighway whose abbreviation inspired this puzzle’s theme WORLD WIDE WEB
34D. Start of a 55-Across address HTTP

Today’s Wiki-est, Amazonian Googlies
Across
1. Indian spiced tea CHAI
Chai is a drink made from spiced black tea, honey and milk, with “chai” being the Hindi word for “tea”. We often called tea “a cup of char” growing up in Ireland, with “char” being our slang word for tea, derived from “chai”.

5. Certain PC laptops IBMS
IBM was founded as the Tabulating Machine Company in 1896. The company changed its name to the Computing Tabulating Recording Corporation (CTR) in 1911 and was listed on the New York Stock Exchange in 1916. The name of International Business Machines (IBM) was given first to the company’s Canadian subsidiary, and then its South American subsidiary. In 1924, it was decided to adopt the International Business Machines name for the whole company. Good choice …

18. World’s longest river NILE
Depending on definition, the Nile is generally regarded as the longest river on the planet. The Nile forms from two major tributaries, the White Nile and the Blue Nile, which join together near Khartoum, the capital of Sudan. From Khartoum the Nile flows north, traveling almost entirely through desert making it central to life for the peoples living along its length.

24. “Exodus” actor Mineo SAL
Sal Mineo’s most famous role was John “Plate” Crawford, the kid who was in awe of the James Dean character in “Rebel Without a Cause”. Sadly, Mineo was murdered in 1976 when he was just 37 years old. He was attacked in the alley behind his Los Angeles apartment and stabbed through the heart. When an arrest was made it was discovered that the murderer had no idea that his victim was a celebrity, and that his plan was just to rob anyone who came along.

“Exodus” is the 1960 film of the Leon Uris novel of the same name. Paul Newman heads the cast, and Sal Mineo had a supporting role playing Dov Landau.

28. Genie’s offering WISH
The “genie” in the bottle takes his or her name from “djinn”. “Djinns” were various spirits considered lesser than angels, with people exhibiting unsavory characteristics said to be possessed by djinn. When the book “The Thousand and One Nights” was translated into French, the word “djinn” was transformed into the existing word “génie”, because of the similarity in sound and the related spiritual meaning. This “génie” from the Arabian tale became confused with the Latin-derived “genius”, a guardian spirit thought to be assigned to each person at birth. Purely as a result of that mistranslation the word genie has come to mean the “djinn” that pops out of the bottle. A little hard to follow, I know, but still quite interesting …

40. 2000 Mel Gibson film WHAT WOMEN WANT
“What Women Want” is a romantic comedy released in 2000 starring Mel Gibson and Helen Hunt. It’s a fun film about an ad man who magically gets the ability to hear women’s thoughts. There are rumors of a sequel in the works called “What Men Want”, starring Cameron Diaz.

45. Transparent LIMPID
A liquid (or eyes, for that matter) described as “limpid” is said to be “clear”. It derives from the Latin “limpa” meaning “water goddess” or “water”, which is the same root as our word “lymph”.

47. __-cone: shaved ice dessert SNO
A sno-cone (also “snow cone”) is just a paper cone filled with crushed ice and topped with flavored water. Italian ice is similar, but different. Whereas the flavoring is added on top of the ice to make a sno-cone, Italian ice is made with water that is flavored before it is frozen.

48. Christmas cupful NOG
It’s not really clear where the term “nog” comes from although it might derive from the word “noggin”, which was originally a small wooden cup that was long associated with alcoholic drinks.

50. 1980 Olivia Newton-John/ELO hit XANADU
The title song of the 1980 movie “Xanadu” was performed by the Electric Light Orchestra (ELO) and Olivia Newton-John (who starred in the film). Despite the popularity of ELO around the world, the song “Xanadu” was the band’s only number one hit back in their homeland of the UK.

55. Information superhighway whose abbreviation inspired this puzzle’s theme WORLD WIDE WEB
The World Wide Web was effectively the invention of English computer scientist Tim Berners-Lee. The key to Berner-Lee’s invention was bringing together two technologies that already existed: hypertext and the Internet. I for one am very grateful …

58. Comic Smirnoff YAKOV
The Ukrainian-born comedian Yakov Pokhis is better known by his stage name, Yakov Smirnoff. Smirnoff was popular on television in the eighties, playing comedic roles with a thick Russian accent. He is a smart cookie, and holds a master’s degree in positive psychology from the University of Pennsylvania.

61. Lake bordering Ohio ERIE
Erie is the shallowest of the Great Lakes, something for which nearby residents must be quite grateful. Being relatively shallow, Erie freezes over part way through most winters putting an end to the lake effect snow that falls in the snow belt extending from the lake’s edge.

62. “__Cop”: 1987 film ROBO-
“RoboCop” is a film that was released in 1987, starring Peter Weller in the title role. Weller wore a very impressive “robot” suit for the film, the most expensive item on the set, costing over a million dollars. Weller would lose three pounds a day in sweat alone as temperatures inside the suit went to over 100 degrees F.

65. Gumbo veggie OKRA
Gumbo is a type of stew or soup that originated in Louisiana. The primary ingredient can be meat or fish, but to be true gumbo it must include the “holy trinity” of vegetables, namely celery, bell peppers and onion. Okra used to be a requirement but this is no longer the case. Okra gave the dish its name as the vernacular word for the African vegetable is “okingumbo”, from the Bantu language spoken by many of the slaves brought to America.

67. Manuscript editor’s “Leave it in” STET
“Stet” is the Latin word meaning “let it stand”. In editorial work, the typesetter is instructed to disregard any change previously marked by writing the word “stet” and then underscoring that change with a line of dots or dashes.

Down
1. Works on a licorice stick CHEWS
Liquorice (also licorice) and aniseed have similar flavors, but they come from unrelated plants. The liquorice plant is a legume like a bean, and the sweet flavor is an extract from the roots. The flavor mainly comes from an ether compound called anethole, the same substance that gives the distinctive flavor to anise. The seedpods of the anise plant are what we know as “aniseed”. The anise seeds themselves are usually ground to release the flavor.

7. Gangland gal MOLL
The slang term “moll” is a used for the female companion of a gangster. “Moll” is short for “Molly”, which is a nickname for “Mary”. In 17th century England a moll was a prostitute.

33. Hula Hoop manufacturer WHAM-O
Hula hoops were a big craze in the 1950s, but they have been around in various forms at least since the year 500 BCE!

34. Start of a 55-Across address HTTP
“http” are the first letters in most Internet link addresses. “http” stands for HyperText Transfer Protocol.

37. Goatee’s location CHIN
A goatee is a beard formed just by the hair on a man’s chin. The name probably comes from the tuft of hair seen on an adult goat.

44. Ever so slightly A TAD
Back in the 1800s “tad” was used to describe a young child, and this morphed into our usage meaning a small amount in the early 1900s. The original use of “tad” for a child is very likely a shortened version of “tadpole”.

51. Pianist Peter and a fiddling emperor NEROS
Peter Nero is a pianist and conductor of “pops” orchestral concerts. Nero had a huge hit in the pop music charts in 1971 with the theme tune from the movie “Summer of ’42”.

The Great Fire of Rome raged for five and a half days in 64 AD. Of the fourteen districts of Rome, three were completely destroyed and seven more suffered serious damage. The emperor at the time was of course Nero, although reports that he fiddled, played his lyre or sang while the city burned; those accounts are probably not true. In fact, Nero was staying outside of Rome when the fire started and rushed home on hearing the news. He organized a massive relief effort, throwing open his own home to give shelter to many of the citizens who were left living on the street.

54. WWII attacker U-BOAT
U-boat stands for the German “Unterseeboot” (undersea boat). U-boats were primarily used in WWII to enforce a blockade against enemy commercial shipping, with a main objective being to cut off the supplies being transported to Britain from the British colonies and the US. The epic fight for control of the supply routes became known as the Battle of the Atlantic.

58. Pricey handbag letters YSL
Yves Saint-Laurent was a French fashion designer, actually born in Algeria. Saint-Laurent started off working as an assistant to Christian Dior at the age of 17. Dior died just four years later, and as a very young man Saint-Laurent was named head of the House of Dior. However, in 1950 he was conscripted into the French Army and ended up in a military hospital after suffering a mental breakdown from the hazing inflicted on him by his fellow soldiers. His treatment included electroshock therapy and administration of sedatives and psychoactive drugs. Saint-Laurent was released from prison, managed to pull his life back together and started his own fashion house. A remarkable story …

60. Kit __: candy bar KAT
I grew up eating Kit Kat bars as a kid, as the chocolate confection has been around since the thirties. Kit Kats didn’t hit the shelves in the US until the seventies. I’ve seen new varieties of Kit Kat over in the UK, such as an orange-flavored version, but haven’t seen anything like that over here.