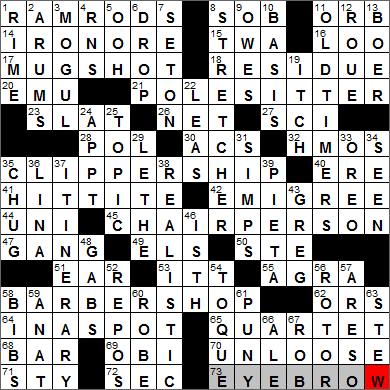 17A. *Wanted poster picture, usually (MUG)SHOT
21A. *Well-positioned driver at Indy (POLE) SITTER
35A. *Sailboat built for speed (CLIPPER) SHIP
45A. *Board meeting VIP (CHAIR)PERSON
58A. With 65-Across, a cappella group, and what the starts of the answers to starred clues comprise BARBERSHOP
65A. See 58-Across QUARTET

Today’s Wiki-est, Amazonian Googlies
Across
1. Gun barrel cleaners RAMRODS
A ramrod is a “stick” that is inserted into the barrel of an older firearm in order to pack the bullet or ball tightly against the charge of gunpowder. A ramrod can also be used to push a cleaning rag through the barrel of a gun.

14. Steel foundry input IRON ORE
Metals are found in ore in the form of oxides. In order to get pure metal from the ore, the ore is heated and the metal oxides within are reduced (i.e. the oxygen is removed) in the chemical process known as smelting. The oxygen is extracted by adding a source of carbon or carbon monoxide which uses up the excess oxygen atoms to make carbon dioxide, a waste product of smelting (and of course, a greenhouse gas).

15. Grounded flier since 2001 TWA
Trans World Airlines (TWA) was a big carrier in the US, but was perhaps even more recognized for its extensive presence in Europe and the Middle East. For many years, especially after the collapse of Pan-Am, TWA was considered the unofficial flag carrier for the US. The company started in 1930, the product of a forced merger of Transcontinental Air Transport and Western Air Express. The Transcontinental and Western Air that resulted (the original meaning of the acronym TWA) was what the Postmaster General wanted, a bigger airline to which the Postal Service could award airmail contracts.

16. British lav LOO
When I was growing up in Ireland, a “bathroom” was a room that had a bath and no toilet. The separate room with the commode was called “the toilet” or sometimes the W.C. (the water closet). Apparently the term closet was used because in the 1800s when homeowners started installing toilets indoors they often displaced clothes and linens in a “closet”, as a closet was the right size to take the commode. It has been suggested that the British term “loo” comes from Waterloo (water-closet … water-loo), but no one seems to know for sure. Another suggestion is that the term comes from the card game of “lanterloo” in which the pot containing the bets was called the loo!

20. Big bird EMU
The emu has had a tough time in Australia since man settled there. There was even an “Emu War” in Western Australia in 1932 when migrating emus competed with livestock for water and food. Soldiers were sent in and used machine guns in an unsuccessful attempt to drive off the “invading force”. The emus were clever, breaking their usual formations and adopting guerrilla tactics, operating as smaller units. After 50 days of “war”, the military withdrew. Subsequent requests for military help for the farmers were ignored. The emus had emerged victorious …

21. *Well-positioned driver at Indy (POLE) SITTER
The first Indy 500 race was held on Memorial Day in 1911. The winner that day was one Ray Harroun. Harroun had seen someone using a rear view mirror on a horse-drawn vehicle, and decided to fit one on his Marmon “Wasp” motor car. Supposedly that was the first ever use of a rear view mirror on a motor vehicle.

35. *Sailboat built for speed (CLIPPER) SHIP
A clipper was a sailing ship, commonly crossing the seas in the 19th century. Clippers were built for speed, so were narrow and had less room for carrying freight than many vessels used in trade. They were developed largely due to the demand for speedy delivery of fresh tea from China to Europe. The name comes from the term “to clip” meaning to move swiftly (as in “at a clip”). Perhaps the most famous clipper ship is the Cutty Sark built in 1869, the last clipper to be built as a merchant vessel. The Cutty Sark owes her fame to the fact that she is on display as a museum ship in a dry dock in Greenwich in London.

41. Uriah was one HITTITE
Uriah the Hittite was a soldier mentioned in the Bible, a soldier in the army of King David. Uriah was married to Bathsheba with whom King David had an affair. David had Uriah killed and then took Bathsheba as his wife. Bathsheba and David became the parents of Solomon who succeeded David as king.

49. Trains above the road ELS
“Els” are elevated railroads.

53. Addams family cousin ITT
In the television sitcom “The Addams Family”, the family had a frequent visitor called Cousin Itt. Itt is a short man with long hair that runs from his head to the floor. Cousin Itt was played by Italian actor Felix Silla.

55. Indian tourist destination AGRA
The most famous mausoleum in the world has to be the Taj Mahal in Agra, India. The Taj Mahal was built after the death of the third wife of Shah Jahan, Mumtaz Mahal (hence the name of the mausoleum). The poor woman died in childbirth delivering the couple’s 14th child.

58. With 65-Across, a cappella group, and what the starts of the answers to starred clues comprise BARBERSHOP
65. See 58-Across QUARTET
Barbershop music is played in the a cappella style, meaning that it is unaccompanied vocal music. Barbershop music originated in the African American communities in the South, as gospel quartets often gathered in neighborhood barber shops to sing together.

69. Kimono closer OBI
The sash worn as part of traditional Japanese dress is known as an obi. The obi can be tied in what is called a butterfly knot.

12. Lecherous sort ROUE
“Roue” is a lovely word, I think, describing a less than lovely man. A roue could otherwise be described as a cad, someone of loose morals. “Roue” comes from the French word “rouer” meaning “to break on a wheel”. This describes the ancient form of capital punishment where a poor soul was lashed to a wheel and then beaten to death with cudgels and bars. I guess the suggestion is that a roue, with his loose morals, deserves such a punishment.

13. Dutch South African BOER
Boer is the Dutch and Afrikaans word for “farmer”, a word that was used to describe the Dutch-speaking people who settled parts of South Africa during the 1700s.

19. Calamine target ITCH
Calamine is mainly zinc oxide, with a small percentage of iron oxide. Calamine is incorporated into a lotion that is used for many things, including treatment of sunburn and itching.

29. River in Hades LETHE
The Lethe is one of the five rivers of Hades in Greek mythology. All the souls who drank from the river Lethe experienced complete forgetfulness. The Greek word “lethe” means “oblivion, forgetfulness”.

33. Popular dunker OREO
The Oreo was the best-selling cookie in the 20th century, and almost 500 billion of them have been sold since they were introduced in 1912 by Nabisco. In those early days the creme filling was made with pork fat, but today vegetable oils are used instead. If you take a bite out of an Oreo sold outside of America you might notice a difference from the homegrown cookie, as coconut oil is added in the overseas version to give a different taste.

36. Filmmaker Wertmüller LINA
Lina Wertmüller was an Italian movie director of Swiss descent. Wertmüller was the first woman ever to receive an Academy Award nomination for directing, in 1976 for her film “Seven Beauties”.

39. Michelangelo statue PIETA
The Pietà is a representation of the Virgin Mary holding in her arms the dead body of her son Jesus. The most famous Pietà is probably the sculpted rendition by Michelangelo which is located in St. Peter’s Basilica in Vatican City. In some depictions of Mary with Jesus in her arms, mother and son are surrounded by other figures from the New Testament. These depictions are known as “Lamentations”.

43. Golfer Norman GREG
Greg Norman is from Australia, a golfer who spent a long time ranked as the world’s number one in the eighties and nineties. Off the golf course, Norman is a very, very successful businessman. One of his more visible ventures is his winery called Greg Norman Estates.

46. Connecting strip of land: Abbr. ISTH
The word “isthmus” (plural “isthmi”) comes the Greek word for “neck”. An isthmus is a narrow strip of land that usually connects two large land masses. The most notable examples of the formation are the Isthmus of Corinth in the Greek peninsula, and the Isthmus of Panama connecting North and South America.

54. Chef’s headgear TOQUE
A toque was a brimless style of hat that was very fashionable in Europe in the 13th to 16th centuries. Nowadays we associate toques with chefs, as it is the name given to a chef’s hat (called a “toque blanche” in French, a “white hat”). A chef’s toque is quite interesting. Many toques have exactly 100 pleats, often said to signify the number of ways that an egg can be cooked.