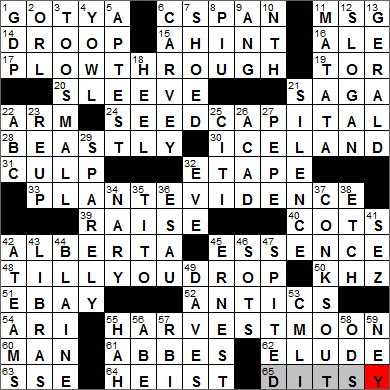 CROSSWORD SETTER: Jean O’Connor
THEME: Word from the Farm … each of today’s themed answers starts with a word associated with farming:

17A. Deal with, as a stack of dull paperwork PLOW THROUGH
24A. Investor’s initial support SEED CAPITAL
33A. Create an incriminating trail PLANT EVIDENCE
48A. How long to shop, on a spree? TILL YOU DROP
55A. Autumn lunar phenomenon HARVEST MOON

11. Much-studied flavor enhancer MSG
Monosodium glutamate (MSG) is the sodium salt of a naturally-occurring,non-essential amino acid called glutamic acid. It is used widely as a flavor enhancer, particularly in many Asian cuisines. Whether or not it is harmful seems to be still under debate. I say that something produced in a test tube shouldn’t be in our food …

15. Foodie’s words for subtle flavoring A HINT
“Foodie” is a slang term for someone with a refined interest in food, a gourmet.

21. Galsworthy’s “The Forsyte __” SAGA
“The Forsyte Saga” is a series of novels written by John Galsworthy. There is an excellent BBC television series dating back to 1967 that tells the whole tale in 26 episodes. It ran here in America on PBS and helped to establish “Masterpiece Theater” as the success it is today. In the BBC series, Irene Forsyte was played by Nyree Dawn Porter, but the stars of the show were Susan Hampshire in the role of Fleur Forsyte, and Eric Porter as Soames Forsyte. Great stuff …

30. Singer Björk’s birthplace ICELAND
Björk is a rather eccentric singer-songwriter from Iceland who is a big hit in the UK in particular. Björk is the daughter of a nationally recognized union leader in her home country.

31. Cosby’s “I Spy” co-star CULP
The very successful TV show “I Spy” ran from 1965-68. Robert Culp played secret agent Kelly Robinson, opposite Bill Cosby who played Alexander Scott. I saw Bill Cosby perform live in San Jose not too long ago, and what a great evening it was! Sadly, Robert Culp passed away in 2010, pronounced dead after a fall just outside his home. He was 79 years old.

32. Tour de France stage ETAPE
“Étape” is the French word for stage, as in a “stage” in the Tour de France. It is used in English military circles to describe where troops halt overnight, but can also describe the section of the march itself. So, a march can be divided into stages, into étapes.

Back in the late 1800s, long-distance cycle races were used as promotional events, traditionally to help boost sales of newspapers. These races usually took place around tracks, but in 1902 the backers of the struggling sports publication “L’Auto” decided to stage a race that would take the competitors all around France. That first Tour de France took place in 1903, starting in Paris and passing through Lyon, Marseilles, Bordeaux, Nantes and then back to Paris.

42. Montana neighbor ALBERTA
Alberta is one of Canada’s largest provinces, and is about the size of Texas. Alberta is named after Princess Louise Caroline Alberta, the fourth child of Queen Victoria and Prince Albert. Princess Louise also donated her name to Lake Louise, the large glacial lake in the province that lies within the bounds of today’s Banff National Park.

51. Bidding site EBAY
eBay is an auction site with a twist. If you don’t want to enter into an auction to purchase an item, there’s a “Buy It Now” price. Agree to pay it, and the item is yours …

54. Kitty’s love in “Exodus” ARI
“Exodus” is the 1960 film of the Leon Uris novel of the same name. Paul Newman heads the cast, and Sal Mineo has a supporting role playing Dov Landau. The female lead is Eva Marie Saint who portrays Kitty Fremont.

55. Autumn lunar phenomenon HARVEST MOON
The Harvest Moon is the full moon occurring closest to the autumnal equinox. Often the Harvest Moon appears to be a warm red color just after it rises, more so than other full moons in the year. This is because light coming from the moon rising near the end of September passes through more atmospheric particles that the rest of the year.

60. Checker on a board, say MAN
Checkers is yet another word that I had to learn moving across the Atlantic. In Ireland the game is called draughts.

61. French clerics ABBES
“Abbé” is the French word for an abbot.

Down
1. National econ. yardstick GDP
A country’s Gross National Product (GNP) is the value of all services and products produced by its residents in a particular year. GNP includes all production wherever it is in the world, as long as the business is owned by residents of the country concerned. Gross Domestic Product (GDP) is different, and is the value of all services and goods produced within the borders of the country for that year.

2. Fla. NBA team ORL
The Orlando Magic were formed in 1989 as an NBA expansion team. A local paper was asked to run a competition to suggest names for the new team and the community came up with its four top picks of “Heat”, “Tropics”, “Juice” and “Magic”. A committee then opted for “Orlando Magic”. A good choice I think …

6. “Wayne’s World” co-star CARVEY
Dana Carvey, along with the likes of Phil Hartman and Kevin Nealon, was part of the new breed of “Saturday Night Live” comedians accredited with resurrecting the show in the late eighties. One of Carvey’s most popular characters was the Church Lady, and he became so associated with her that among fellow cast members Carvey was often referred to simply as “the Lady”. Carvey had open-heart surgery in 1997 to clear a blocked artery, but the surgical team operated on the wrong blood vessel. To recover, he had to have five more procedures. He ended up suing for medical malpractice and donated his $7.5 million compensation payment to charity.

“Wayne’s World” was originally a Saturday Night Live sketch starring Mike Myers (as Wayne) and Dana Carvey. The sketch was so successful that it was parlayed into two hit movies, released in 1992 and 1993. Not my cup of tea though …

9. Filmmaker Lee ANG
Taiwanese director Ang Lee sure has directed a mixed bag of films, mixed in terms of genre but not in terms of quality. He was at the helm for such classics as “Sense & Sensibility” (my personal favorite), “Crouching Tiger, Hidden Dragon”, “Hulk”, and “Brokeback Mountain”.

13. Spiro’s successor GERALD
President Gerald Ford was well known for his athletic prowess. He was the star football player both in his high school and later at the University of Michigan. After graduation, President Ford received two offers to play in the NFL, from the Detroit Lions and the Green Bay Packers. He turned down both teams opting instead to take a coaching position at Yale giving him the opportunity to apply to Yale Law School. But young Mr. Ford’s plan backfired as Yale Law School turned him down because of his full-time commitment to sports: coaching football, boxing and teaching JV cheer-leading. It took three years for President Ford to make it into Yale Law School, but he finally got there, in 1938.

Spiro Agnew served as Vice-President under Richard Nixon, before becoming the only VP in American history to resign because of criminal charges (there was a bribery scandal). Agnew was also the first Greek-American to serve as US Vice-President as he was the son of a Greek immigrant who had shortened the family name from Anagnostopoulos.

25. Bank lead-in CITI-
During the global financial crisis of 2008-2009, the US government rescued Citibank by providing loan guarantees and two payments of $25 billion each. It turns out that the government made a tidy profit on that deal, as Citibank has since repaid the loans in full, along with interest.

27. Animated Le Pew PEPE
Pepé Le Pew is a very likeable cartoon character from the Looney Tunes and Merrie Melodies series. Pepé is a French skunk, first introduced way back in 1945. He is always thinking of “l’amour” and chases the lady skunks, or a black cat with a white stripe painted down her back accidently.

35. Jackson 5 brother TITO
Tito Jackson was the third oldest of the Jackson children, and was known in Motown as the “quiet Jackson”.

36. Rebekah’s eldest ESAU
Esau was the twin brother of Jacob, the founder of the Israelites. When their mother Rebekah gave birth to the twins “the first emerged red and hairy all over (Esau), with his heel grasped by the hand of the second to come out (Jacob)”. As Esau was the first born, he was entitled to inherit his father’s wealth (it was his “birthright”). Instead, Esau sold his birthright to Jacob for the price of a “mess of pottage” (a meal of lentils).

37. Goes kaput CONKS OUT
“Kaput” comes to us from French via German. “Capot” means “not having won a single trick” in the French card game called Piquet.

43. Some October babies LIBRAS
The constellation of Libra is named for the scales held by the goddess of justice. Libra is the only sign of the zodiac that isn’t named for a living creature.

44. He replaced Ken as Barbie’s beau from 2004 to 2006 BLAINE
The famous Barbie doll was created by businesswoman Ruth Handler and first appeared on store shelves in 1959. Barbie was based on a German fashion doll called Bild Lilli that was introduced in 1955. Lilli had been a German cartoon character before taking on a three-dimensional form. Prior to the introduction of Bild Lilli and Barbie, children’s dolls were primarily representations of infants.

Barbie’s male counterpart doll is Ken, and Ken’s family name is Carson. Barbie’s full name is Barbie Millicent Roberts. When Ken was introduced in 1959, it was as Barbie’s boyfriend. In 2004 it was announced that Ken and Barbie were splitting up, and needed to spend quality time apart. Soon after the split, Barbie “met” Blaine, a boogie boarder from Australia.

45. Actor Borgnine ERNEST
Ernest Borgnine was the stage name of actor Ermes Borgnino from Hamden, Connecticut. One of Borgnine’s most famous roles was Lieutenant Commander Quinton McHale in the hit TV series “McHale’s Navy”. Borgnine had himself served in the US Navy from 1935 to 1941. He then re-enlisted after the attack on Pearl Harbor and served until 1945.

46. They’re often stewed SOTS
Our word “sot” comes from the Old English “sott”, meaning a fool. The word “sot” started to be associated with alcohol and not just foolery in the late 1500s.

59. Napoleonic marshal NEY
Michel Ney was one of the first 18 Marshals of France created by Napoleon. When Bonaparte was eventually defeated for the last time, Ney was arrested and sentenced to death. He was executed in Paris by firing squad. Nay refused to wear a blindfold, and demanded that he himself be allowed to give the order to fire.