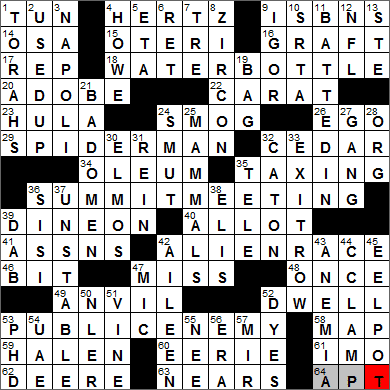 CROSSWORD SETTER: Marti DuGuay-Carpenter
THEME: Double Trouble … each of today’s answers is a well known term that is a composite of two items that would be trouble for a person referenced in the clue:

18A. Double trouble … for a hydrophobic teetotaler? WATER BOTTLE
29A. … for an arachnophobic hermit? SPIDERMAN
36A. … for an acrophobic wallflower? SUMMIT MEETING
42A. … for a xenophobic couch potato? ALIEN RACE
53A. … for an agoraphobic soldier? PUBLIC ENEMY

Today’s Wiki-est, Amazonian Googlies
Across
4. Avis rival HERTZ
The Hertz car rental company was started in 1918 by Walter L. Jacobs in Chicago. He began with just twelve model T Ford cars available for rent. In 1923, the car rental operation was bought out by John D. Hertz who incorporated it into his truck and coach manufacturing company.

9. Amazon.com nos. ISBNS
The International Standard Book Number (ISBN) was invented by one Gordon Foster who is now a professor at Trinity College Dublin in Ireland. The code was originally developed for booksellers, so that they had a unique number (and now a barcode) for each publication.

Madrid is the largest city in Spain and the capital. Madrid is located very close to the geographical center of the country.

15. Cheri who impersonated Judge Judy on “Saturday Night Live” OTERI
Cheri Oteri was the SNL cast member who regularly appeared with Will Farrell in the skit featuring a pair of Spartan cheerleaders.

20. Pueblo brick ADOBE
The building material known as adobe has been around a long time, and has been used in dry climates all over the world. The original form of the word “adobe” dates back to Middle Egyptian times, about 2000 BC. The original spelling is “dj-b-t”, and translates as mud (sun-dried) brick.

22. Stone unit CARAT
A carat is a unit of mass used in measuring gemstones and is equal to 200 mg.

23. Dance that tells a story HULA
Hula is the name of the Polynesian dance. The chant or song that the dance illustrates, that’s known as the mele.

24. Skyline haze SMOG
“Smog” is of course a portmanteau word formed by melding “smoke” and “fog”. The term was first used to describe the air around London in the early 1900s.

26. Id controller EGO
Sigmund Freud created a structural model of the human psyche, breaking it into three parts: the id, the ego, and the super-ego. The id is that part of the psyche containing the basic instinctual drives. The ego seeks to please the id by causing realistic behavior that benefits the individual. The super-ego almost has a parental role, contradicting the id by introducing critical thinking and morals to behavioral choices.

34. Pharmaceutical oil OLEUM
Oleum (plural: olea) is the Latin word for “oil”. The term oleum is used for a whole host of pharmaceutical oils, extracted from both plant and animal sources.

46. Shtick BIT
A “shtick” is a routine, a bit, a piece of entertainment. It comes from the Yiddish “shtick”, which has the same meaning and derives from the Middle High German word “stücke”, the word for “piece”.

58. AAA freebie MAP
The American Automobile Association (AAA) is a not-for-profit organization focused on lobbying, provision of automobile servicing, and selling of automobile insurance. The AAA was founded in 1902 in Chicago, and published the first of its celebrated hotel guides back in 1917.

59. Rockers Van __ HALEN
Van Halen is a heavy metal band formed in Pasadena, California back in 1972. Brothers Eddie and Alex Van Halen originally called the band Mammoth, changing the name to Van Halen in 1974 when they found out there was another Mammoth playing the circuit. Early on, the brothers were renting a sound system from David Lee Roth, and they decided to save some money by bringing him into the band and saving on the rental fee!

62. Steel plow pioneer DEERE
John Deere invented the first commercially successful steel plow in 1837. Prior to Deere’s invention, farmers used an iron or wooden plow that constantly had to be cleaned as rich soil stuck to its surfaces. The cast-steel plow was revolutionary as its smooth sides solved the problem of “stickiness”.

Down
1. Some ark contents TORAHS
The Torah ark is found in a synagogue, and is the ornamental container in which are stored the Torah scrolls.

3. Port near Vesuvio NAPOLI
Naples (“Napoli” in Italian) is the third largest city in Italy. The name “Napoli” comes from the city’s Ancient Greek name, which translates as “New City”. That’s a bit of a paradox as today Naples is one of the oldest continuously-inhabited cities in the world.

Mount Vesuvius is on the Bay of Naples, just over five miles from the city of Naples. The most famous of its eruptions took place in AD 79, the one which destroyed the Roman cities of Pompeii and Herculaneum. Today Vesuvius is considered to be one of the most dangerous volcanoes in the world, largely because it is at the center of the most densely populated volcanic region in the world, with 3 million people living nearby.

5. SFO posting ETA
San Francisco International Airport (SFO) is the maintenance hub for United Airlines, and is the principal base for Virgin America.

8. December stone ZIRCON
Zircon is the name of the mineral with the chemical name of zirconium silicate. Zircon comes in many colors, and colorless specimens that are of gem quality are often used as a substitute for diamonds.

9. Yaroslavna’s spouse, in a Borodin opera IGOR
“Prince Igor” is an opera by the Russian composer, Alexander Borodin. Borodin died before he had finished “Prince Igor”, so it was completed by Nikolai Rimsky-Korsakov and Alexander Glazunov. Music from “Prince Igor” and other Borodin works was used in the American musical “Kismet”.

12. Gp. for Jets, but not Sharks NFL
Just like the New York Giants, the New York Jets are based in New Jersey, headquartered in Florham Park. The Jets and the Giants have a unique arrangement in the NFL in that the two teams share the same stadium, the New Meadowlands in East Rutherford, New Jersey. The Jets were an AFL charter team, formed in 1959 as the Titans of New York. They changed their name to the Jets in 1963.

The San Jose Sharks hockey team play their home games at the HP Pavillion in San Jose, a venue that we locals call “the Shark Tank”.

13. __-Foy, Quebec STE
Sainte-Foy was a city in its own right, but as of 2002 it is a neighborhood in Quebec City. Sainte-Foy is an important part of the larger city, partly because it is home to the area’s main airport, Jean Lesage International.

27. Sharks or Jets GANG
Leonard Bernstein’s musical “West Side Story” is of course based on William Shakespeare’s “Romeo and Juliet”. The musical is set in New York City and features two rival gangs: the Sharks from Puerto Rico and the Jets with working-class, Caucasian roots. Tony from the Jets falls in love with Maria from the Sharks. All this parallels Romeo from the House of Montague falling for Juliet from the House of Capulet in the Italian city of Verona.

30. “__ World”: “Sesame Street” feature ELMO’S
Back in 1966, the Carnegie Institute allocated money to study the use of television to help young children prepare for school. The institute gave an $8million grant to set up the Children’s Television Workshop with the task of creating an educational TV program for young people. The program began to come together, especially after Jim Henson (of Muppet fame) got involved. The name “Sesame Street” was chosen simply because it was the “least disliked” of all names proposed just before the program went on the air.

32. Williams title starter CAT ON
“Cat on a Hot Tin Roof” is the play that won Tennessee Williams the Pulitzer Prize for Drama in 1955. The play was adapted into a famous film version in 1958, with Elizabeth Taylor and Paul Newman playing the leads.

38. Yale Bowl cheerers ELIS
Eli is the nickname for a graduate of Yale University, a term used in honor of the Yale benefactor Elihu Yale.

42. Quinn of “Annie” AILEEN
Aileen Quinn is an actress from Yardley, Pennsylvania. Quinn was only 12 years old when she was given the title role in John Huston’s 1982 film adaptation of “Annie”.

43. Weak state ANEMIA
The term “anemia” (or “anaemia” as we write it back in Ireland) comes from a Greek word meaning “lack of blood”. Anemia is a lack of iron in the blood, or a low red blood cell count. Tiredness is a symptom of the condition.

45. Sniggler’s tool EELPOT
A sniggler is a person who angles for eels (as is an “eeler”). The terms comes from “snig”, a young eel, which in turn is probably related to Old English “snegge” meaning “snail”.

50. Buc or Met NLER
The Pittsburgh Pirates (nicknamed the Bucs or Buccos) were an early team in the National Baseball League, joining in 1887 just six years after the league was formed. The Pirates played in the first ever World Series, in 1903, and actually won their first World Series in 1909.

The New York Mets baseball team was founded in 1962, a replacement for two teams that the city had lost, namely the Brooklyn Dodgers and the New York Giants. For several years the Mets played very poorly, finishing no better than second-to-last in their division. Then of course along came the “Miracle Mets” who beat the Baltimore Orioles in 1969 to claim the World Series in a huge upset.

51. Kudzu, for one VINE
Kudzu is a climbing vine that is native to southern Japan and southeast China. “Kudzu” is derived from the Japanese name for the plant, “kuzu”. Kudzu is a vigorously growing weed that chokes other plants by climbing all over them and shielding them from light. Kudzu was brought to the US from Asia for the Japanese pavilion in the 1876 Centennial Exposition in Philadelphia. It was marketed as an ornamental, especially in the southeast of the country, and now is all over the region. Kudzu earned itself the nickname “the vine that ate the South”.

53. Advanced deg. PHD
PhD is an abbreviation for “philosophiae doctor”, Latin for “teacher of philosophy”.

54. OPEC member UAE
The United Arab Emirates (UAE) is a federation of seven emirates (states) in the Middle East. Included in the seven are Abu Dhabi and Dubai, with the city of Abu Dhabi being the UAE capital and cultural center.

55. Family tree word NEE
“Née” is the French word for “born” when referring to a female. The male equivalent is “né”.

57. Fallen space station MIR
The Russian Mir Space Station was a remarkably successful project, with the station still holding the record for the longest continuous manned presence in space, at just under ten years. Towards the end of the space station’s life however, the years began to take their toll. There was a dangerous fire, multiple system failures, and a collision with a resupply ship. The Russian commitment to the International Space Station drained funds for repairs, so Mir was allowed to reenter the Earth’s atmosphere and burn up in 2001.