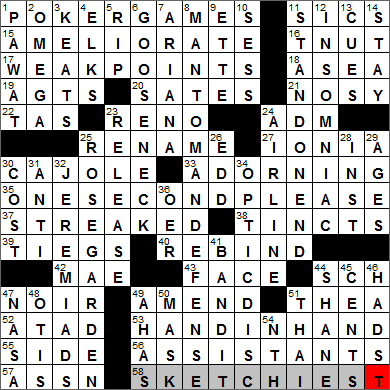 11. Unleashes SICS
Sic ’em is an attack order given to a dog, instructing the animal to growl, bark or even bite. The term dates back to the 1830s, with “sic” being a variation of “seek”.

15. Better AMELIORATE
“To ameliorate” is to make better, and comes to us from French. The French for “better” is “meìlleur”.

16. Hardware item T-NUT
A T-nut is so called because it has a t-shape when viewed from the side.

19. FBI employees AGTS
What we know today as the FBI was set up in 1908 as the BOI, the Bureau of Investigation. The name was changed to the Federal Bureau of Investigation in 1935. The Bureau was set up at the behest of President Theodore Roosevelt. President Roosevelt was largely moved to do so after the 1901 assassination of President McKinley, as there was a perception that anarchists were threatening law and order .

23. __-Tahoe Open: annual PGA Tour event RENO
Reno, Nevada was named in honor of Major General Jesse Lee Reno, a Union officer killed in the Civil War. The city has a famous “Reno Arch”, a structure that stands over the main street. The arch was erected in 1926 to promote an exposition planned for the following year. After the expo, the city council decided to keep the arch and held a competition to decide what wording should be displayed, and the winner was “The Biggest Little City in the World”.

24. USCG VIP ADM
The US Coast Guard (USCG) has the distinction of being the country’s oldest continuous seagoing service. The USCG was founded as the Revenue Cutter Service by Alexander Hamilton in 1790.

27. Ancient Aegean region west of Lydia IONIA
Lydia and Ionia were ancient territories in a part of the world now covered by modern-day Turkey. Both territories eventually fell under Greek and then Roman rule.

38. Colors TINCTS
To tinct is to do just that, add a little color to something.

39. Memorable swimsuit model Cheryl TIEGS
Cheryl Tiegs was only 17-years-old when she appeared as a model on the cover of “Glamour” magazine. After that Tiegs became famous for sequential appearances in the “Sports Illustrated Swimsuit Issue” throughout the seventies.

42. Space shuttle astronaut Jemison MAE
Mae Jemison was a crew member on the Space Shuttle Endeavour on a 1992 mission. As such, Jemison became the first African American woman to travel in space. Jemison is also a big fan of “Star Trek” and appeared on an episode of “Star Trek: The Next Generation”. That made her the first real astronaut to appear on any of the “Star Trek” shows.

47. “Sunset Boulevard” genre NOIR
The expression “film noir” has French origins, but only in that it was coined by a French critic in describing a style of Hollywood film. The term, meaning “black film” in French, was first used by Nino Frank in 1946. Film noir often applies to a movie with a melodramatic plot and a private eye or detective at its center. Good examples would be “The Big Sleep” and “D.O.A”.

“Sunset Boulevard” is a classic film noir co-written and directed by the great Billie Wilder, released in 1950. It’s a story about a faded film star (played by Gloria Swanson) who dreams about making a return to the screen. Andrew Lloyd Weber made a reasonable successful musical adaptation of the film that opened in London in 1993 using the same title.

51. TV’s “__-Team” THE A
“The A-Team” is an action television series that originally ran in the eighties. The A-Team was a group of ex-US special forces personnel who became mercenaries. Star of the show was Hollywood actor George Peppard, ably assisted by Mr. T and Robert Vaughan.

52. Not much A TAD
Back in the 1800s “tad” was used to describe a young child, and this morphed into our usage meaning a small amount in the early 1900s. The original use of “tad” for a child is very likely a shortened version of “tadpole”.

55. Hypotenuse, e.g. SIDE
The hypotenuse is the longest side of a right-angled triangle.

Down
2. Greek horseshoe? OMEGA
Omega is the last letter of the Greek alphabet and is the one that looks like a horseshoe. The word “omega” literally means “great O” (O-mega). Compare this with the Greek letter Omicron meaning “little O” (O-micron).

The poet John Keats is famous for writing a whole series of beautiful odes. The most renowned are the so-called “1819 Odes”, a collection from the year 1819 that includes famous poems such as “Ode on a Grecian Urn”, “Ode to a Nightingale” and “Ode to Psyche”.

4. Big bucks ELKS
The elk (also known as the wapiti) is the one of the largest species of deer in the world, with only the moose being bigger. Early European settlers were familiar with the smaller red deer back in their homelands, so when they saw the “huge” wapiti they assumed it was a moose, and incorrectly gave it the European name for a moose, namely “elk”. The more correct name for the beast is “wapiti”, which means “white rump” in Shawnee. It’s all very confusing …

7. Richards of “Jurassic Park” ARIANA
Ariana Richards is an actress and painter from Healdsburg, California. Richards’ most famous role was playing the young girl in the group hiding from the dinosaurs in the “Jurassic Park” movie. In her adult life, Richards is pursuing a successful career as an artist.

13. Sticks around the pool hall CUES
The more correct name for the game of pool is pocket billiards. The name “pool” came after pocket billiards became a common feature in “pool halls”, places where gamblers “pooled” their money to bet on horse races.

24. Delta, but not gamma AIRLINE
Today, Delta is the world’s largest airline (after merging with Northwest Airlines in 2008) and is also the oldest airline still operating in the US. Delta’s roots go back to 1924 before it started carrying passengers and was called Huff Duland Dusters, a crop dusting company based in Macon, Georgia. The name Delta Air Service was introduced in 1928.

26. Onetime Leno announcer Hall EDD
Edd Hall is most famous as a former announcer for Jay Leno on “The Tonight Show”.

32. Lamentations JEREMIADS
A jeremiad is a work of literature, sometime poetic but mainly prose. The tone of the piece is always that of a bitter lament as the author derides the state of society and predicts it’s downfall. The name “jeremiad” is imitative of the prophet Jeremiah who wrote the Book of Jeremiah and the Book of Lamentations in which he prophesies the fall of the Kingdom of Judah due to the wayward practices of its leaders.

34. Anatomical blind spot site OPTIC DISC
The optic disc is the location on the retina where the optic nerve enters the eyeball. Because there are no light-sensitive cells at the optic disc, there is a “hole” in our visual field that is called the blind spot. People with normal vision don’t usually notice this blind spot as the brain “fills in” the blind spot with information from the other eye.

41. Oater baddie BANDIT
The term “oater” that is used for a western movie comes from the number of horses seen, as horses love oats!

44. “A man has to be what he is, Joey” speaker SHANE
The classic 1953 western movie called “Shane” is based on the novel of the same name by Jack Schaefer published in 1949.

47. Curiosity org. NASA
NASA’s Curiosity rover is the fourth in a series of unmanned surface rovers that NASA has sent to Mars. Previous rovers are the Sojourner rover (1997), Spirit rover (2004-2010) and Opportunity rover (2004-present). Curiosity rover was launched in November of 2011, and landed on Mars in August 2012 after having travelled 350 million miles. After that long journey, Curiosity landed just 1½ miles from its targeted touchdown spot.

51. Pad __: stir-fried noodles THAI
The delicious dish called Pad Thai is a meld of stir-fried rice noodles with tamarind juice, red chili pepper plus a mix of vegetables and possibly tofu, meat or fish. It is usually topped with crushed peanuts, coriander and lime. The name “Pad Thai” translates as “fried Thai style”.