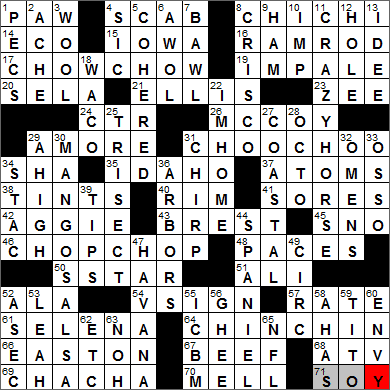 CROSSWORD SETTER: C.C. Burnikel
THEME: CHs … each of today’s themed answers is an expression comprised of two identical parts, each beginning with the letters CH:

8A. Affectedly trendy CHICHI
17A. Chinese dog with a blue-black tongue CHOW CHOW
31A. Tot’s toy on a track CHOO-CHOO
46A. “Make it snappy!” CHOP-CHOP
64A. “Bottoms up!” CHIN-CHIN
69A. Mambo cousin CHA-CHA

Today’s Wiki-est, Amazonian Googlies
Across
8. Affectedly trendy CHICHI
Someone who is “chichi” is showily trendy and pretentious. “Chichi” is a French noun meaning “airs, fuss”.

14. Earth Day prefix ECO-
Earth Day was founded in the US, an event introduced by Senator Gaylord Nelson of Wisconsin. Earth Day was designed to increase awareness and appreciation of our planet’s natural environment. The original Earth Day was on April 22nd, 1970. Decades later, the day is observed in over 175 countries.

15. Corn Belt state IOWA
The state of Iowa was part of the French colony known as New France until it was acquired by the US in the Louisiana Purchase. The state’s name comes from the Ioway Native American people who lived there at the time European’s started exploring the area.

16. Muzzleloading aid RAMROD
A ramrod is a “stick” that is inserted into the barrel of an older firearm in order to pack the bullet or ball tightly against the charge of gunpowder. A ramrod can also be used to push a cleaning rag through the barrel of a gun.

17. Chinese dog with a blue-black tongue CHOW CHOW
The Chow Chow is a breed of dog that originated in China. The Chinese name for the breed is “Songshi Quan”, which translates as “puffy-lion dog”, a rather apt name given its appearance …

20. Ward on TV SELA
The actress Sela Ward turns up in crosswords a lot. Ward played Teddy Reed in the TV show “Sisters” in the nineties, and was in “Once and Again” from 1999-2002. I don’t know either show, but I do know Ward from the medical drama “House” in which she played the hospital’s lawyer and Greg House’s ex-partner. That was a fun role, I thought. More recently Ward has been playing a lead role on “CSI: NY” and is a very welcome and much-needed addition to the cast …

21. New York’s __ Island ELLIS
Ellis Island is an exclave of New York City that is geographically located within Jersey City, New Jersey. The name comes from a Samuel Ellis who owned the island around the time of the American Revolution.

23. 26th of 26 ZEE
The letter named “zed” has been around since about 1400, and derives from the Greek letter zeta. The spelling and pronunciation of “zee” used in America today first popped up in the 1670s.

26. Doctor whom Captain Kirk calls “Bones” MCCOY
The actor DeForest Kelley is best known for playing Bones McCoy in the original “Star Trek” cast. The show’s creator, Gene Roddenberry, originally offered Kelley the role of Spock, but Kelly refused it and so was given the part of the ship’s medical officer.

34. Doo-wop syllable SHA
Doo-wop developed in the 1940s and can be described as a vocal-based R&B music. Even though the style has been around since the forties, the name doo-wop wasn’t introduced until the early sixties.

35. College football’s Famous __ Potato Bowl IDAHO
The Famous Idaho Potato Bowl has been played annually at Boise State University since 1997. Prior to winning sponsorship from the Idaho Potato Commission, the game was known as the Humanitarian Bowl.

42. Texas A&M athlete AGGIE
Texas A&M is the seventh largest university in the country, and was the first public higher education institute in the state when it accepted its first students in 1876. The full name of the school was the Agricultural and Mechanical College of Texas and its primary mission used to be the education of males in the techniques of farming and military warfare. That’s quite a combination! Because of the agricultural connection, the college’s sports teams use the moniker “Aggies”.

43. Port west of Paris BREST
Brest is a port city in northwest France, the second largest military port in the country. Brest was an important base for German U-boats during WWII when France was occupied by the Nazis.

45. __-Caps: candy SNO
Sno-Caps are a brand of candy usually only available in movie theaters. Sno-caps have been around since the twenties, would you believe?

46. “Make it snappy!” CHOP-CHOP
“Chop chop” is Chinese Pidgin English, and is just a reiteration of the word “chop” used in the sense of moving quickly.

51. “Sting like a bee” boxer ALI
Muhammad Ali first used his famous catchphrase “float like a butterfly and sting like a bee” before his world title fight against Sonny Liston in 1964. Back then Ali still went by his birth name of Cassius Clay.

52. Chicken __ king A LA
Chicken à la King is made with diced chicken in a cream sauce served over rice or pasta. There are several claims about the origin of the dish, but the most credible (to me) is that it was created in the 1890s in the Bellevue Hotel in Philadelphia by the hotel’s chef William King.

61. One-named Tejano singer SELENA
Singer Selena Quintanilla-Perez, known professionally simply as “Selena”, was murdered in 1995 by the president of her own fan club at the height of her career. In a 1997 biopic about Selena’s life, Jennifer Lopez played the title role.

Tejano is the Spanish word for “Texan”. Tejano music is strongly influenced by Cajun culture, because of the proximity of Texas to Louisiana. The other strong influence came with immigrants from the Poland and what is now the Czech Republic. These immigrants brought with them the waltz, polka … and the accordion.

64. “Bottoms up!” CHIN-CHIN
“Chin-chin” is an informal greeting or a toast. It derives from the Chinese “ch’ing-ch’ing” meaning ‘“please-please”.

Lafayette College in Easton, Pennsylvania was founded in 1826 and was named after the Revolutionary War officer, General Lafayette.

The cha-cha-cha is a Latin dance with origins in Cuba, where it was introduced by composer Enrique Jorrin in 1953.

The form of music and dance known as mambo developed in Cuba. “Mambo” means “conversation with the gods” in Kikongo, a language spoken by slaves taken to Cuba from Central Africa.

71. Dim sum sauce SOY
Dim sum is a Chinese cuisine made up of small portions of various dishes. The tradition of serving dim sum is associated with the serving of tea, when small delicacies were offered to travelers and guests along with tea as a refreshment. The name “dim sum” translates as “touch the heart” implying that dim sum is not a main meal, just a snack “that touches the heart”.

Down
1. Bench-presser’s pride PECS
“Pecs” is the familiar term for the chest muscle, more correctly known as the pectoralis major muscle.

4. [Not a typo] SIC
“Sic” indicates that a quotation is written as originally found, perhaps including a typo. “Sic” is Latin for “thus, like this”.

8. Big name in cooking oil CRISCO
The Crisco brand of shortening was the first shortening to be made entirely from vegetable oil. Although that sounds like a good thing, it’s actually made by hydrogenating vegetable oil so that it has physical properties similar to the animal shortening it was designed to replace. This hydrogenation turns good fats into bad fats, so medical professionals suggest limited intake.

11. Victor at Little Bighorn CRAZY HORSE
Crazy Horse’s Lakota name translates literally into English as “His Horse is Crazy or Spirited”. Crazy Horse was one of the tribal war party leaders at the Battle of Little Bighorn, also known as Custer’s Last Stand. Crazy Horse surrendered to the US Army in 1877. He was fatally stabbed while in custody, apparently trying to escape after having surrendered. The circumstances surrounding his death are still shrouded in controversy.

12. Swiss cheese feature HOLE
Swiss cheese is a relatively generic term and a type of cheese produced in various countries and not necessarily in Switzerland. What the cheeses all have in common is a resemblance to the original Swiss Emmental.

13. Nantes notion IDEE
Nantes is a beautiful city located on the delta of the Loire, Erdre and Sèvre rivers. Nantes has the well deserved nickname of “The Venice of the West”. I had the privilege of visiting Nantes a couple of times on business, and I can attest that it really is a charming city.

18. City SSW of Dallas WACO
In recent years, Waco is perhaps most famous as the site of a siege and shootout between ATF agents and members of the Protestant sect known as the Branch Davidians. Shortly after ATF agents tried to execute a search warrant, shots were fired and at the end of the fight six people inside the Branch Davidian compound were dead, as were four agents. A fifty-day siege ensued at the end of which a final assault resulted in members of the community setting fire to the compound. Only nine people walked away from that fire. 50 adults and 25 children perished.

33. __ buco: veal dish OSSO
Osso is the Italian word for bone as in the name of the dish Osso Buco: braised veal shanks.

34. Opp. of legato, in music STAC
Staccato is a musical direction signifying that notes should be played in a disconnected form. The opposite of staccato would be legato: long and continuous notes played very smoothly.

47. Largest city of the West Indies HAVANA
Havana is the capital city of Cuba. The city was founded by the Spanish in the early 1500s after which it became a strategic location for Spain’s exploration and conquest of the Americas. In particular, Havana was used as a stopping-off point for treasure-laden ships on the return journey to Spain.

49. Cosmo concern: Abbr. CIRC
“Cosmopolitan” magazine was first published way back in 1886! It started out life as a family magazine, then as a literary publication. “Cosmo” took its present form as a women’s magazine in the sixties.

53. Rachel’s sister LEAH
Leah was the older sister of Rachel and the first wife of Jacob. Leah was also mother of six of the twelve tribes of Israel as she was mother of six of Jacob’s sons (she also had one daughter).

55. SALT subject ICBM
An Intercontinental Ballistic Missile (ICBM) is a ballistic missile with the range necessary to cross between continents. Being ballistic (as opposed to a cruise missile) an ICBM is guided during the initial launch phase, but later in flight just relies on thrust and gravity to arrive at its target. It is defined as intercontinental as it has a range greater that 3,500 miles. ICBMs are really only used for delivering nuclear warheads. Scary stuff …

There were two rounds of Strategic Arms Limitation Talks between the US and the Soviet Union, and two resulting treaties (SALT I & SALT II). The opening round of SALT I talks were held in Helsinki as far back as 1970.

59. Longtime Yugoslav president TITO
Marshal Josip Broz Tito led the Yugoslav resistance during WWII, and after the war led the country as Prime Minister and then President.

63. Japanese drama NOH
Noh is a form of musical drama in Japan that has been around since the 14th century. Many of the Noh performers are masked, allowing all the roles to be played by men, both male and female parts.