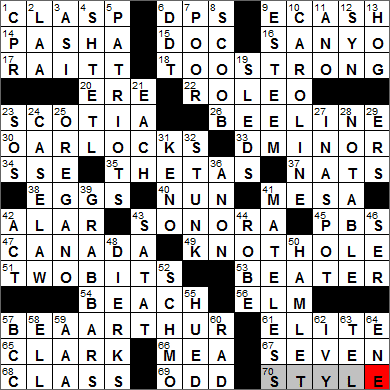 CROSSWORD SETTER: Jeff Stillman
THEME: That Is the Question for Starters … taking the first syllable of each of the starred answers gives us a famous line from Shakespeare’s “Hamlet”, namely “To be, or not to be,”

14. Old Turkish bigwig PASHA
A pasha was a high-ranking official in the Ottoman Empire, roughly equivalent to the English rank of “lord”.

15. Dwarf with glasses DOC
In the original Brothers Grimm fairy tale called “Snow White”, the seven dwarfs were not given any names. The names were added for the 1937 classic Disney film “Snow White and the Seven Dwarfs”. The seven dwarfs are:

16. 2009 Panasonic acquisition SANYO
Sanyo is a Japanese electronics manufacturer based near Osaka and founded in 1947. The company name means “three oceans” reflecting the company’s original aim to sell its products all around the world (across three oceans: the Atlantic, the Pacific and the Indian).

17. “Something to Talk About” singer Bonnie RAITT
Bonnie Raitt is a blues singer, originally from Burbank, California. Raitt has won nine Grammys for her work, but she is perhaps as well known for her political activism as she is for her music. She was no fan of President George W. Bush while he was in office, and she sure did show it.

22. Contest for lumberjacks ROLEO
Roleo is the name given to a log rolling competition traditionally engaged in by lumberjacks

23. Nova __ SCOTIA
The Canadian province of Nova Scotia lies on the east coast of the country and is a peninsula surrounded by the Atlantic Ocean. The area was settled by Scots starting in 1621, and Nova Scotia is Latin for “New Scotland”.

33. Key of Mozart’s Requiem Mass D MINOR
Wolfgang Amadeus Mozart wrote his famous “Requièm Mass in D minor” in 1791, the last year of his life. The work was left unfinished, and so was completed by fellow composer Franz Xaver Süssmayr. The original manuscript of the “Requièm” written in Mozart’s hand was put on display at the World’s Fair in Brussels in 1958. Some unknown person tore off the bottom righthand corner of the page on display, taking the words “Quam olim d: C:”, a musical instruction. That musical instruction was probably the last phrase written by Mozart before he died, and presumably the perpetrator of the crime knew this.

34. Juneau-to-Ketchikan dir. SSE
Given that it’s the capital of the vast state of Alaska, it is perhaps not surprising to learn that the municipality of Juneau is almost as big as the area of the states of Rhode Island and Delaware combined, and yet has only a population of about 31,000 people!

Ketchikan is the most southeasterly city in the state of Alaska.

35. Some sorority women THETAS
The Greek letter theta is the one that looks like a number zero with a horizontal line in the middle.

37. D.C. baseball team NATS
The Washington Nationals baseball team started out life as the Montreal Expos in 1969. The Expos moved to Washington in 2005 becoming the Nats. There are only two Major Leagues teams that have never played in a World Series, one being the Mariners and the other the Nats.

38. Frittata base EGGS
The word “frittata” is Italian, and comes from “fritto” meaning “fried”.

40. Convent dweller NUN
Convents have been religious houses since the 1200s, but it wasn’t until the 1700s that convents became purely female institutions.

41. Painted Desert formation MESA
“Mesa” is the Spanish for “table” and is of course is how we get the term “mesa” that describes a geographic feature. “What’s the difference between a butte and a mesa?” I hear you cry! Both are hills with flat tops, but a mesa has a top that is wider than it is tall. A butte is a much narrower formation, taller than it is wide.

The Painted Desert in Arizona is a beautiful area noted for colorful rock formations.

42. Controversial apple spray ALAR
The chemical name for Alar, a plant growth regulator and color enhancer, is daminozide. Alar was primarily used on apples but was withdrawn from the market when it was linked to cancer.

51. *Quarter TWO BITS (to)
The American quarter is a little unusual in the world of decimal currency if you think about it. Most currencies have a “20-cent” coin, easier to work with mathematically. The US went for the quarter in deference to the practice of dividing Spanish Milled Dollars into eight wedge-shaped “bits”. That’s also why the quarter is sometimes referred to as “two bits”.

57. *”The Golden Girls” co-star BEA ARTHUR (be)
Actress Bea Arthur’s most famous roles were on television, as the lead in the “All in the Family” spin-off “Maude” and as Dorothy Zbornak in “The Golden Girls”. Arthur also won a Tony for playing Vera Charles on stage in the original cast of “Mame” in 1966, two years after she played Yente the matchmaker in the original cast of “Fiddler on the Roof”.

65. Big name in bars CLARK
The Clark Bar is a candy bar made by NECCO. The Clark Bar is named for its inventor, David L. Clark, who created the confection way back in 1917.

4. “Fiddler on the Roof” village SHTETL
The Yiddish word for “town” is “shtot”, and so “shtetl” is the diminutive form meaning “small town”. The fictional shtetl featured in the musical in “Fiddler on the Roof” is called Anatevka, which is also the title of my favorite song from the show.

The enduring musical “Fiddler on the Roof” is based on a collection of stories by Sholem Aleichem about Tevye, a milkman in Tsarist Russia. The musical version of the tales first opened on Broadway in 1964. “Fiddler on the Roof” had such a long run that it became the first musical to reach 3,000 performances.

5. Hale and Revere, notably PATRIOTS
Nathan Hale fought for the Continental Army during the American Revolution, and was most famous for operating as a spy against the British. It was Nathan Hale who uttered the words, just before he was hanged by his British captors, “I only regret that I have but one life to lose for my country”.

Paul Revere is of course famous for having alerted the Colonial militia when the British military arrived in the build up to the battles of Lexington and Concord. Revere earned his living as a silversmith. After the war, Revere returned to his trade and diversified into other metalwork. Revere was the first American to develop a process to roll copper into sheets so that the metal could be used to sheathe the hulls of naval vessels.

6. EPA-banned pesticide DDT
DDT is dichlorodiphenyltrichloroethane (don’t forget now!). DDT was used with great success to control disease-carrying insects during WWII, and when made available for use after the war it became by far the most popular pesticide. And then Rachel Carson published her famous book “Silent Spring”, suggesting there was a link between DDT and diminishing populations of certain wildlife. It was the public outcry sparked by the book, and reports of links between DDT and cancer, that led to the ban on the use of the chemical in 1972. That ban is touted as the main reason that the bald eagle was rescued from near extinction.

8. Shaggy’s dog, to Shaggy SCOOB
“Scooby-Doo, Where Are You!” is a series of cartoons produced for Hanna-Barbera Productions, first aired in 1969.

11. Yucatán year ANO
The Yucatán is one of Mexico’s 31 states and is located in the east of the country, on the northern tip of the Yucatán peninsula.

23. Urgent call at sea SOS
The combination of three dots – three dashes – three dots, is a Morse signal first introduced by the German government as a standard distress call in 1905. The sequence is remembered as the letters SOS (three dots – pause – three dashes – pause – three dots), although in the emergency signal there is no pause between the dots and dashes, so SOS is in effect only a mnemonic. Similarly, the phrases “Save Our Souls” and “Save Our Ship” are also mnemonics, introduced after the “SOS” signal was adopted.

31. Numbers game with 80 balls KENO
The name “Keno” has French or Latin roots, with the French “quine” being a term for five winning numbers, and the Latin “quini” meaning “five each”. The game originated in China and was introduced into the West by Chinese immigrants who were working on the first Transcontinental Railroad in the 1800s.

44. Harry Potter costume ROBE
The author of the amazingly successful “Harry Potter” series of books is J. K. Rowling. Rowling wrote the first book when she was living on welfare in Edinburgh in Scotland, and in longhand. She would often write in local cafes, largely because she needed to get her baby daughter out of the house (she was a single mom), and the youngster would tend to fall asleep on walks. Within five years, the single mom on welfare became a very rich woman, and is now worth about $1 billion!

50. Speaker of the first syllables of the answers to starred clues HAMLET

52. Chowderhead SCHMO
“Schmo” is American slang for a dull or boring person, from the Yiddish word “shmok”.

The word “chowderhead”, applied to someone who is regarded as stupid, has nothing to do with chowder at all. Rather, it is a corruption of an older term “cholter-head” meaning the same thing, but of unknown origin.

57. Secretly keep in the email loop, briefly BCC
A blind carbon copy (bcc) is a copy of a document or message that is sent to someone without other recipients of the message knowing about that extra copy.

62. Columbia, for one IVY
The term “Ivy League” originally defined an athletic conference, but now it is used to describe a group of schools of higher education that are associated with both a long tradition and academic excellence. The eight Ivy League Schools are: Brown, Columbia, Cornell, Dartmouth, Harvard, Princeton, the University of Pennsylvania, and Yale.

64. Acetyl ending -ENE
Acetylene is one of the simplest hydrocarbons, and has the formula C2H2. About 20% of the acetylene produced in the world is used for oxyacetylene gas welding and cutting.