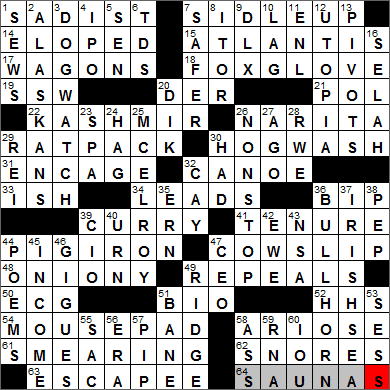 CROSSWORD SETTER: Mark Feldman
THEME: Animals Come First … each of today’s themed answers is a well-known term that starts with an animal, and is clued to refer to an unlikely meaning of the term:

Today’s Wiki-est, Amazonian Googlies
Across
1. Exemplar of cruelty SADIST
A sadist is someone who derives pleasure from inflicting pain, with that pleasure often being sexual in nature. The term “sadist” comes from the Marquis de Sade who was known to exhibit such tendencies.

The Marquis de Sade was a French aristocrat with a reputation for a libertine lifestyle. De Sade was also a writer, well known for his works of erotica. He fell foul of the law for some of his more extreme practices and for blaspheming the Catholic church. On an off, de Sade spent 32 years of his life in prison and in insane asylums.

18. Animal’s paw warmer? FOXGLOVE
Foxgloves are a genus of plants with the biological name digitalis. The group of medicines called Digitalin are extracts from foxgloves and are used in the treatment of heart conditions.

20. Strauss’s “__ Rosenkavalier” DER
“Der Rosenkavalier” is a comic opera composed by Richard Strauss, with the title translating as “The Knight of the Rose”.

21. Neighbor of Ger. POL
As the world learned at the start of WWII, Germany shares a border with Poland.

22. Subject of a China/India/Pakistan territorial dispute KASHMIR
Kashmir is a vast region in the northwest of the Indian sub-continent. Kashmir has a long and rich history, but the year that is most significant today is perhaps 1947. In that year, Britain pulled out of the Indian sub-continent and divided the Indian Empire into the independent countries of India and Pakistan, leaving the Maharajah ruling Kashmir free to join either India or Pakistan. When the Kashmiri Maharajah wavered in his decision, Pakistani forces advanced into Kashmir, prompting the Maharajah to turn to India for assistance. India did indeed help, but only on condition that Kashmir accede to India. India then called in the United Nations to intercede, but no definitive solution was found that brought peace to the region. There has been conflict there ever since.

26. Tokyo airport NARITA
Plans were put together for the construction of Narita International Airport back in 1966. However, the airport was not a popular addition to the metropolis in some quarters and demonstrations, often violent,  delayed the project. Originally planned for completion in 1971, the airport didn’t open until 1978. The opening ceremony was attended by about 6,000 protesters and 14,000 security police.

29. Animal’s hiking gear? RAT PACK
The original Rat Pack from the fifties was a group of actors that centered on Humphrey Bogart, and included a young Frank Sinatra. Supposedly, Bogart’s wife, Lauren Bacall, christened them the Rat Pack after seeing them all return from one of their nights on the town in Las Vegas. The sixties Rat Pack was a reincarnation of the fifties version, with the core group of actors being Frank Sinatra, Dean Martin (Dino), Sammy Davis Jr., Joey Bishop and Peter Lawford.

30. Animal’s laundry? HOGWASH
Hogwash was originally the name of the swill fed to pigs.

36. Marcel Marceau character BIP
Marcel Marceau was the most famous mime of all time, a native of Strasbourg in France. Marceau made a cameo appearance in Mel Brooks’s “Silent Movie”, playing himself. In the scene, Mel Brooks is asking Marceau to appear in his movie (a question asked silently of course, in subtitles), and Marceau turns to the camera and speaks the only word in the whole film, “Non!” (French for “No!”). The mime speaks! Brilliant …

39. Indian spice CURRY
Curry powder is actually a mixture of spices used in South Asian cuisine. The actual composition of curry powder varies depending on the cuisine.

44. Animal’s golf club? PIG IRON
Pig iron is crude iron that has been cast in blocks. The traditional molds produce ingots attached to a central runner. The configuration resembles a sow (the runner) with piglets (the ingots) suckling. This similarity gave rise to the name “pig iron”.

48. Like some bagels ONIONY
The bagel was invented in the Polish city of Kraków in the 16th century. Bagels were brought to this country by Jewish immigrants from Poland, who mainly established homes in and around New York City.

50. Heart lines: Abbr. ECG
An EKG measures electrical activity in the heart. Back in my homeland of Ireland, an EKG is known as an ECG (for electrocardiogram). We use the German name in the US, Elektrokardiogramm, giving us EKG. Apparently the abbreviation EKG is preferred as ECG might be confused (if poorly handwritten, I guess) with EEG, the abbreviation for an electroencephalogram.

58. Melodic ARIOSE
A tune that is “ariose” is song-like, characterized by melody as opposed to harmony.

63. One on the lam ESCAPEE
To be “on the lam” is to be in flight, to have escaped from prison. “On the lam” is American slang that originated at the end of the 19th century. The word “lam” also means to “beat” or “thrash”, as in “lambaste”. So “on the lam” might derive from the phrase “to beat it, to scram”.

64. Hot spots SAUNAS
As my Finnish-American wife will tell you, “sauna” is a Finnish word, and is correctly pronounced “sow-nah” (with “sow” as in the female pig).

3. Animal’s timepiece? DOGWATCH
In the traditional watch system at sea, the crew is divided into two “teams”, often called the port and starboard watches. Each watch works for four hours and then rests for four hours, works again for four hours and rests etc. As there are six 4-hour periods (also called watches, to confuse!) in every day, and six is an even number, the period from midnight to 4am would have to be stood by the same crew members. As this is the watch that is considered undesirable to many, then a system was devised to rotate responsibilities for fairness. The “dogwatch” is the 4-hour period between 4pm and 8pm and it was split into two 2-hour periods, the first dogwatch and second dogwatch. This resulted in a complement of seven watches in every 24-hour period, an odd number. Consequently, the team attending a particular watch in a day, is replaced by the opposite team on the next day.

4. Wall St. debut IPO
An Initial Public Offering (IPO) is the very first offer of stock for sale by a company on the open market. In other words, an IPO marks the first time that a company is traded on a public exchange. Companies have an IPO to raise capital to expand (usually).

5. Obama, before he was pres. SEN
President Obama served three terms in the Illinois State Senate, from 1997 to 2004. The future President ran unsuccessfully for the US House of Representatives in 2000, and then successfully for the US Senate in 2004. Famously, State Senator Obama delivered the keynote address to the Democratic National Convention in 2004, just a few months before winning that US Senate seat.

12. Paradise UTOPIA
The word Utopia was coined by Sir Thomas More, for his book “Utopia” published in 1516 describing an idyllic fictional island in the Atlantic Ocean. More’s use of the name Utopia comes from the Greek “ou” meaning “not” and “topos” meaning “place”. By calling his perfect island “Not Place”, More was apparently making the point that he didn’t think that the ideal could actually exist.

16. Psalm instruction SELAH
“Selah” is a word that appears commonly in the Book of Psalms in the Bible. Apparently the exact meaning of the word is unclear, but it is used as an instruction in reading or singing the text.

20. Cartoonist Browne DIK
The cartoonist Dik Brown is most associated with the comic strip “Hägar the Horrible”, which he drew and wrote. Browne also drew the strip “Hi and Lois”.

25. Neil __, Defense secretary under Eisenhower MCELROY
Neil McElroy was the president of Procter & Gamble prior to being appointed as Secretary of Defense for President Eisenhower from 1957 to 1959.

28. “The American Scholar” essayist’s monogram RWE
Ralph Waldo Emerson was an essayist and poet who was active in the mid-1800s. Most of the essays that Emerson wrote were composed originally as lectures and then revised for print.

32. Low islet CAY
A “key” (also “cay”) is a low island offshore, as in the Florida Keys. Our term in English comes from the Spanish “cayo” meaning “shoal, reef”.

35. Coastal flier ERN
The ern (also erne) is also called the white-tailed eagle, and the sea-eagle.

37. It surrounds the Isle of Man IRISH SEA
The Isle of Man is a large island located in the middle of the Irish Sea between Great Britain and Ireland. I used to spend a lot of time there in my youth, and a very interesting place it is indeed. The Isle of Man is classed as a British Crown Dependency and isn’t part of the United Kingdom at all. It is self-governing and has its own parliament called the Tynwald. The Tynwald was created in AD 979 and is arguably the oldest continuously-running parliament in the world. The inhabitants of the island speak English, although they do have their own language as well called Manx, which is very similar to Irish Gaeilge and Scottish Gaelic. And then there are those Manx cats, the ones without any tails. I’ve seen lots of them, and can attest that they are indeed found all over the island.

39. Gp. in a 1955 labor merger CIO
The American Federation of Labor (AFL) was founded in 1886, making it one of the first federations of unions in the country. Over time the AFL became dominated by craft unions, unions representing skilled workers of particular disciplines. In the early thirties, John L. Lewis led a movement within the AFL to organize workers by industry, believing this would be more effective for the members. But the craft unions refused to budge, so Lewis set up a rival federation of unions in 1932 called the Congress of Industrial Organizations (CIO). The two federations became bitter rivals for over two decades until finally merging in 1955 to form the AFL-CIO.

43. Ultra-secretive org. NSA
The National Security Agency (NSA) was set up in 1952 by President Truman, a replacement for the Armed Forces Security Agency that had existed in the Department of Defense since 1949. The NSA has always been clouded in secrecy and even the 1952 letter from President Truman that established the agency was kept under wraps from the public for over a generation. I really like the organization’s nickname … “No Such Agency”.

44. Burns bread and butter? POEMS
Robert Burns is a cultural icon in Scotland and for Scots around the world. As a poet, Burns was a pioneer in the Romantic movement in the second half of the 18th century. One of his most famous works is the poem “Auld Lang Syne”, which has been set to the tune of a traditional Scottish folk song and is used to celebrate the New Year in the English-speaking world.

46. Lively Baroque dances GIGUES
A gigue is a dance from the baroque era. Popular in France, the dance was derived from the British jig.

47. Corp. head honcho CEO
“Honcho” is a slang term for a leader or manager. The term comes to us from Japanese, in which language a “hancho” is a squad (han) leader (cho).

57. Die dot PIP
As we all know, the numbers on dice are arranged so that the opposite faces add up to seven. Given this arrangement, the numbers 1, 2 and 3 all meet at a common vertex. Now, there are two ways of arranging the 1, 2 and 3 around the common vertex, a so called right-handed die (clockwise 1-2-3) or a left-handed die (counterclockwise 1-2-3). Traditionally, dice used in Western cultures are right-handed, whereas Chinese dice are left-handed. Quite interesting …