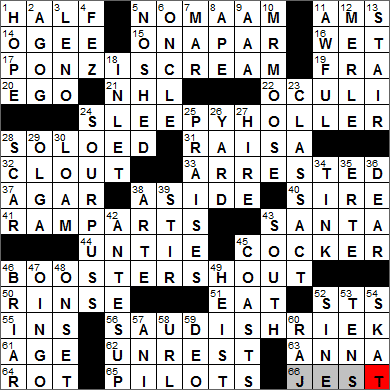 CROSSWORD SETTER: Kurt Krauss
THEME: Sounds Like A Cry … each of today’s themed answers sounds a little like a well known term, and ends with a “cry”:

17A. Cry from a duped investor? PONZI SCREAM (from “Ponzi scheme”)
24A. Cry just before dozing off? SLEEPY HOLLER (from “Sleepy Hollow”)
46A. Cry from a superfan? BOOSTER SHOUT (from “booster shot”)
56A. Cry from a Jeddah native? SAUDI SHRIEK (from “Saudi sheik”)

Today’s Wiki-est, Amazonian Googlies
Across
14. Arch type OGEE
An ogee is like an s-curve. Specifically it is a figure consisting of two arcs that curve in opposite directions (like an S) but both ends of the curve end up parallel to each other (which is not necessarily true for an S).

17. Cry from a duped investor? PONZI SCREAM (from “Ponzi scheme”)
Charles Ponzi was born in Luigi, Italy in 1882 and arrived in the US in 1903, flat broke having gambled away all his money on the voyage to Boston. Ponzi devised a scheme to buy what were known as “international reply coupons” through friends in Italy, which he had sent to him in the US so that he could redeem them on this side of the Atlantic. As the value in the US was greater than that in Italy, he could make a handsome profit. This was in itself an “illegal” transaction, buying an asset in one market at a low price, then immediately selling it in another market at a higher price. But it’s what he did next that became known as a Ponzi Scheme. He couldn’t redeem his coupons quickly enough due to red tape so he approached other investors, initially friends, and had them give him cash so that he could buy more coupons in Italy. He promised the investors he would double their money, which they did initially. Many people wanted to get in on the scheme seeing that Ponzi was able to make the new investors a profit and double the money of the original investors. Eventually, somebody did the math and word started to get out that the investment was risky, so the number of new investors started to fall. Without sufficient new investors Ponzi couldn’t double the money of his latest investors, and the whole scheme unraveled.

21. Where to find Ducks and Penguins: Abbr. NHL
The Walt Disney Company founded the Mighty Ducks of Anaheim hockey team in 1993, with the franchise’s name being a nod to the 1992 Disney movie called “The Mighty Ducks”. The name was changed to the Anaheim Ducks when Disney sold the team before the 2006-2007 season.

The Penguins are the professional hockey team based in Pittsburgh. They have been around since 1967, one of the first expansion teams when the NHL grew from six to twelve teams.

22. Eyes OCULI
Oculus is the Latin word for “eye”, and also is a term used in architecture for a circular window.

24. Cry just before dozing off? SLEEPY HOLLER (from “Sleepy Hollow”)
“Sleepy Hollow” is a Tim Burton film released in 1999. It is of course a screen adaptation of the short story “The Legend of Sleepy Hollow” by Washington Irving. Stars of the film are Johnny Depp and Christina Ricci.

31. Mrs. Gorbachev RAISA
Raisa Gorbachova was the wife of Soviet leader Mikhail Gorbachev. There’s no doubt that Raisa’s charm and personality helped her husband as he worked to change the image of the Soviet Union.

37. Lab medium AGAR
Agar is a jelly extracted from seaweed that has many uses. Agar is found in Japanese desserts, and can also be used as a food thickener or even as a laxative. In the world of science it is the most common medium used for growing bacteria in Petri dishes.

43. Cupid’s boss SANTA
We get the names for Santa’s reindeer from the famous 1823 poem called “A Visit from St. Nicholas”, although we’ve modified a couple of the names over the years. The full list is:

45. Dog named for the bird it hunted, familiarly COCKER
The Cocker Spaniel originated in the UK, where the breed was developed for hunting the Eurasian Woodcock. It is the hunting of the woodcock that led to the breed’s name.

Ringo Starr’s real name is Richard Starkey. Before he joined the Beatles (replacing drummer Pete Best), Starkey played with the Raving Texans. It was with the Raving Texans that he adopted the name “Ringo Starr”, because he wore a lot of rings and he thought it sounded “cowboyish”. Back then his drum solos were billed as “Starr Time”.

56. Cry from a Jeddah native? SAUDI SHRIEK (from “Saudi sheik”)
Jeddah is a Saudi Arabian city on the west coast of the country. Jeddah is the largest port city on the Red Sea, and is the second largest city in Saudi Arabia.

61. Iron __ AGE
Ancient societies can be classified by the “three-age system”, which depends on the prevalence of materials used to make tools. The three ages are:

63. Vronsky’s lover, in Tolstoy ANNA
I have to admit to not having read Tolstoy’s novel “Anna Karenina”, but I did see the excellent 1977 British television adaptation starring Nicola Pagett. Most regard the 1935 film starring Greta Garbo in the title role as the definitive big screen adaptation of the novel.

64. “Balderdash!” ROT
“Balderdash” means a senseless jumble of words, and was originally (back before the late 1600s) a jumbled mix of liquids, like maybe beer and wine, or even beer and milk!.

3. Jay related to a peacock? LENO
Jay Leno was born James Leno in New Rochelle, New York. Jay’s father was the son of Italian immigrants, and his mother was from Scotland. Leno grew up in Andover, Massachusetts and actually dropped out of school on the advice of a high school guidance counsellor. However, years later he went to Emerson college and earned a Bachelor’s degree in speech therapy. Leno also started a comedy club at Emerson in 1973. Today Jay Leno is a car nut and owns about 200 vehicles of various types. You can check them out on his website: www.jaylenosgarage.com.

The National Broadcasting Company (NBC) has had a number of different logos in its history, including the famous peacock with which we are familiar today. The first peacock logo was introduced in the early days of color television and was designed to illustrate how wonderful color television would be, so go buy one! (NBC was owned by RCA, and they had a vested interest in sales of color television sets).

4. Casbah headgear FEZ
“Fez” is the name given to the red cylindrical hat worn mainly in North Africa, and by Shriners here in the US. The fez used to be a very popular hat across the Ottoman Empire. The etymology of “fez” is unclear, although it might have something to do with the Moroccan city named Fez.

Casbah is the Arabic word for a citadel. Casbah usually refers to the citadel in the city of Algiers and the area surrounding it.

9. Travel org. since 1902 AAA
The American Automobile Association (AAA) is a not-for-profit organization focused on lobbying, provision of automobile servicing, and selling of automobile insurance. The AAA was founded in 1902 in Chicago, and published the first of its celebrated hotel guides back in 1917.

10. “Captain Kangaroo” character who told knock-knock jokes MR MOOSE
“Captain Kangaroo” is a TV series for children that CBS aired for a long, long time. The show was first broadcast in 1955, and the last show was aired nearly 30 years later in 1984. The title character was played by Bob Keeshan. Apparently Keeshan had to wear heavy makeup in the early years to make him old enough for his role. The show ran so long that Keeshan had to use makeup to look younger in the latter years.

12. Haggard of country music MERLE
Merle Haggard is a country singer and songwriter whose most famous recording has to be “Okie from Muskogee” released in 1969. Haggard will tell you that the song was actually meant as a spoof, but it has become a country “anthem”.

29. ’70s Olympics name OLGA
Olga Korbut is from modern-day Belarus, but was born during the days of the Soviet Union. Korbut competed for the USSR team in the 1972 and 1976 Olympic Games. She was 17 when she appeared in the 1972 Munich Games, and had been training in a sports school since she was 8-years-old. The world fell in love with her as she was a very emotional young lady, readily expressing joy and disappointment, something that we weren’t used to seeing in athletes from behind the Iron Curtain. Korbut immigrated to the US in 1991 and now lives in Scottsdale, Arizona.

34. Pixie dust leaver, to Peter TINK
Tinkerbell had a relatively small part to play in J. M. Barrie’s play “Peter Pan”, but her role has expanded over the years due to the character’s popularity with movie audiences.

38. Uffizi hangings ARTE
The Uffizi Gallery is one of the oldest art museums in the western world and is housed in the Palazzo degli Uffizi in Florence, Italy. The Palazzo was built in 1560, intended to house the offices of the Florentine magistrates. This original usage gave the gallery its name, as “uffizi” is Italian for “offices”.

47. Rock’s __ Boingo OINGO
Oingo Boingo was a band active from the seventies through the nineties. The group had a reputation for giving pretty wild concerts on Halloween each year.

54. Three-handed game SKAT
When I was a teenager in Ireland, I had a friend with a German father. The father taught us the game of Skat, and what a great game it is. Skat originated in Germany in the 1800s and is to this day the most popular game in the country. I haven’t played it in decades, but would love to play it again …

57. Singer DiFranco ANI
Ani DiFranco is a folk-rock singer and songwriter. DiFranco has also been labeled a “feminist icon”, and in 2006 won the “Woman of Courage Award” from National Organization of Women.

59. “Gloria in Excelsis __” DEO
“Gloria in excelsis Deo” is the title of a Latin hymn, which translates as “Glory to God in the highest”.

60. British rule in colonial India RAJ
The period of colonial rule by the British in South Asia from 1858 to 1947 is referred to as the British Raj. Prior to 1858, the area was ruled by a private enterprise, the British East India Company. “Raj” is the Hindi word for “reign”.