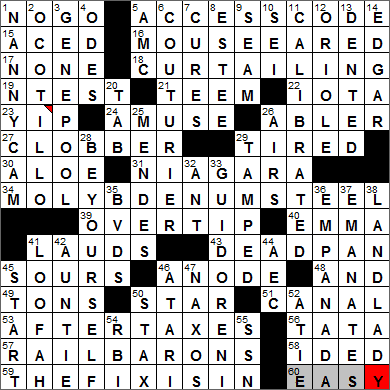 Today’s Wiki-est, Amazonian Googlies
Across
16. Like the cap worn by Annette MOUSE-EARED
Annette Funicello is an actress and singer whose big break came on the original “Mickey Mouse Club”, in which Funicello was one of the most popular of the Mouseketeers. After her time with “Mickey Mouse Club”, she had a very successful few years as a pop singer. Then Funicello transitioned to the big screen and starred alongside Frankie Avalon in the “Beach Party” series of films.

17. One piggy’s portion NONE

19. Big blast N-TEST
There are two classes of nuclear weapons, both of which get the energy for the explosion from nuclear reactions. The first nuclear bombs developed, called atomic bombs (A-bombs), use fission reactions. In an atomic bomb, uranium nuclei are split into smaller nuclei with the release of an awful lot of energy in the process. The second class of nuclear weapons are fusion bombs. Fusion devices are also called thermonuclear weapons or hydrogen bombs (H-bombs). In a fusion reaction, the nuclei of hydrogen isotopes are fused together to form bigger nuclei, with the release of even greater amounts of energy than a fission reaction.

22. Smidge IOTA
Iota is the ninth letter in the Greek alphabet. We use the word “iota” to portray something very small as it is the smallest of all Greek letters.

23. Sound from your favorite toy? YIP
Your favorite dog might be a toy breed, and a yippy one at that …

30. Botanical balm ALOE
Aloe vera has a number of alternate names that are descriptive of its efficacy as a medicine. These include the First Aid plant, Wand of Heaven, Silent Healer and Miracle Plant.

31. It may make honeymooners a bit misty NIAGARA
For well over a century now, the twin cities of Niagara Falls, New York and Niagara Falls, Ontario have been popular spots for honeymoons. Niagara Falls got a boost as a honeymoon destination in 1953 with the release of “Niagara”, a film noir starring Marilyn Monroe and Joseph Cotton.

40. Jane Austen’s aspiring matchmaker EMMA
“Emma” is just a wonderful novel by Jane Austen, first published in 1815. I had the privilege a few years ago of attending the premiere of “Emma”, a delightful musical adaptation for the stage. If you ever get the chance to see it, I highly recommend it …

41. Gives kudos LAUDS
Our word “kudos” is used to acclaim an exceptional achievement. “Kudos” is not a plural, despite a common misapprehension. “Kudos” is a singular noun derived from the Greek “kyddos” meaning “glory, fame”.

43. Hard to read DEADPAN
The term “deadpan”, slang for an impassive expression, comes from dead (expressionless) and pan (slang for “face”).

46. Jumper cable connection point ANODE
The two terminals of a battery are called the anode and the cathode. Electrons travel from the anode to the cathode creating an electric current.

49. A passel TONS
A passel is a large group or quantity. “Passel” is a variation of the word “parcel”.

Down
1. Device hidden by a concerned parent NANNY CAM
From what I just read, it is legal to record video with a hidden camera, at least to monitor the behavior of a caregiver in your home. Apparently there is also a law that prohibits the recording of audio. So, “nanny cams” are sold without audio capability. But (disclaimer) that’s just what I read, so don’t take my word for it!

2. Red-flowering desert shrub OCOTILLO
The ocotillo plant is often referred to as a cactus, but that’s a mistake. It is a desert plant also called Jacob’s staff or vine cactus.

5. Old Gremlin maker AMC
The Gremlin is a subcompact car that was made by AMC in the 1970s. The Gremlin was positioned to compete with the Chevy Vega and Ford Pinto from the US, and with imports like the VW Beetle and Toyota Corona. On the list of ex-Gremlin drivers are Presidents Bill Clinton and George H. W. Bush.

6. High-end fashion designer COUTURIER
“Haute couture”, literally “high dressmaking” in French, is a name given to the creation of exclusive fashions. A couturier is someone who creates or sells such fashions.

8. Name on many compacts ESTEE
Estée Lauder was quite the successful businesswoman, with a reputation as a great salesperson. Lauder introduced her own line of fragrances in 1953, a bath oil called “Youth Dew”. “Youth Dew” was marketed as a perfume, but it was added to bathwater. All of a sudden women were pouring whole bottles of Ms. Lauder’s “perfume” into their baths while using only a drop or two of French perfumes behind their ears. That’s quite a difference in sales volume …

12. Bird that builds hanging nests ORIOLE
An oriole’s nest is a woven cup-like structure that is suspended from a branch like a hammock.

14. Guest in a library EDGAR
The poems of Edgar Guest might be found in a library. In the latter part of his life, Guest was known widely as the People’s Poet.

20. Q’s neighbor TAB
Like most features on our computer keyboards, the tab key is a hangover from the days of typewriters. When using a typewriter, making entries into a table was very tedious as it involved lots of tapping on the spacebar and backspace key. So, a lever was added to typewriters that allowed the operator to “jump” across the page to positions that could be set by hand. Later this was simplified to a tab key, which could be depressed causing the carriage to jump to the next tab stop in much the same way that the modern tab key works on a computer.

25. Brasil ’66 leader MENDES
Sérgio Mendes is a musician from Brazil who headed up the band Sérgio Mendes and Brasil ‘66.

33. Italian Baroque painter known for ceiling frescoes GUIDO RENI
Guido Reni was an Italian painter from Bologna who was active in the first half of the 17th century. Reni painted in the high-Baroque style and is noted for his works on display in the churches of Bologna, Rome and Naples.

35. Briefs not seen in court, hopefully BVDS
The men’s underwear known as BVDs are made by the Bradley, Voorhees & Day. The company was started in 1876 to make bustles for women, and is named for its founders.

36. Mexican stuffed pastry EMPANADA
An empanada is a dish made by folding pastry around cooked meat and vegetables. To me an empanada looks very similar to a dish I grew up with called a Cornish pasty.

38. Mrs. Hudson, to Sherlock Holmes LANDLADY
In the “Sherlock Holmes” stories written by Sir Arthur Conan Doyle, the famous detective has lodgings at 221b Baker Street in London. Holmes shares rooms with his friend and chronicler Dr. Watson. The landlady in the residence is the amiable Mrs. Hudson.

41. Bath scrubber LOOFAH
The loofah (also loofa, lufah and luffa, all Arabic words) is a vine, with fruit that’s very popular in Asia and Africa. If the fruit is allowed to mature, it can be processed to remove everything but the more rigid xylem structure (remember your high school botany class?) leaving a soft, sponge-like mass that is used as a skin polisher.

42. Em’s title AUNTIE
In “The Wonderful Wizard of Oz”, Dorothy lives with her Aunt Em and Uncle Henry.

44. Erstwhile 19-Across overseer: Abbr. AEC
The Atomic Energy Commission (AEC) was set up right after WWII in 1946, with the aim of promoting the peaceful use of atomic energy. Establishing the AEC was a significant move made by President Truman, as it passed control of atomic energy from the military to the civilian sector. The AEC continued to operate until 1974 when its functions were divided up into two new agencies: the Energy Research and Development Administration and the Nuclear Regulatory Commission (NRC).

46. Space Invaders platform ATARI
Space Invaders is one of my favorite video games, a classic from the good old days. When Space Invaders was first released in video arcades in Japan in 1978, it was so popular that it caused a shortage of 100-yen coins.

50. Pringles competitor STAX
Stax is a brand name of potato snack made by Lay’s. Stax are similar to its famous competitor, Pringles.

55. Nine-digit fig. SSN
The main purpose of a Social Security Number (SSN) is to track individuals for the purposes of taxation, although given its ubiquitous use, it is looking more and more like an “identity number” to me. The social security number system was introduced in 1936. Prior to 1986, an SSN was required only for persons with substantial income so many children under 14 had no number assigned. For some years the IRS had a concern that a lot of people were claiming children on their tax returns who did not actually exist. So, from 1986 onward, it is a requirement to get an SSN for any dependents over the ago of 5. Sure enough, in 1987 seven million dependents “disappeared”.