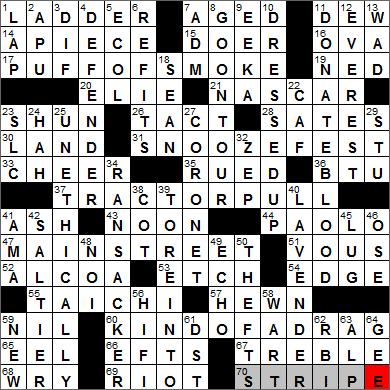 CROSSWORD SETTER: Paul Hunsberger
THEME: “Kind of a Drag” … each of the themed answers is “kind of a drag”:

Today’s Wiki-est, Amazonian Googlies
Across
19. Bushranger Kelly NED
Ned Kelly was an Irish-Australian outlaw, regarded by many as a symbol of resistance against the British ruling class in Australia in the 19th century. There have been two famous films made of his life story. “The Story of the Kelly Gang” was released in 1906, and is recognized today as the first feature film ever made. We might be more familiar with the film called “Ned Kelly” released in 1970, as it starred Mick Jagger in the title role.

20. Novelist Wiesel ELIE
Elie Wiesel is a holocaust survivor, best known for his book “Night” that tells of his experiences in Auschwitz and Buchenwald.

21. “Days of Thunder” org. NASCAR
NASCAR stands for the National Association for Stock Car Auto Racing. NASCAR is very, very popular and commands the second largest television audience of any professional sport in America, second only to football.

36. BBQ heat rating BTU
In the world of heating, ventilation and air conditioning (HVAC), the power of a heating or cooling unit can be measured in British Thermal Units (BTUs). This dated unit is the amount of energy required to heat a pound of water so that the water’s temperature increases by one degree Fahrenheit.

It is believed that our word “barbecue” comes from the Taíno people of the Caribbean in whose language “barbacoa” means “sacred fire pit”.

44. Italian soccer star Maldini PAOLO
Paolo Maldini is a former soccer player from Italy who played his whole career with Serie A in Milan. Maldini was the captain of the national team of Italy for many years, earning him the nickname “Il Capitano”.

51. “Voulez-__”: 1979 ABBA album VOUS
I am an unapologetic fan of ABBA’s music. ABBA was of course the Swedish group who topped the charts in the seventies and eighties. The name ABBA is an acronym formed from the first letters of the given names of each of the band members, namely: Agnetha, Benny, Bjorn and Anni-Frid.

52. Big name in foil ALCOA
The Aluminum Corporation of America (ALCOA) is the largest producer of aluminum in the United States. The company was founded in 1888 in Pittsburgh, Pennsylvania where its headquarters are to this day.

65. Traditional London pie-and-mash ingredient EEL
Eel pie is a traditional dish associated with the working classes in London, England especially during the Victorian era. Eel was chosen as an ingredient as it was one of the few fish that could live in the polluted River Thames.

66. New newts EFTS
Newts wouldn’t be my favorite animals. They are found all over the world living on land or in water depending on the species, but always associated with water even if it is only for breeding. Newts metamorphose through three distinct developmental stages during their lives. They start off as larvae in water, fertilized eggs that often cling to aquatic plants. The eggs hatch into tadpoles, the first developmental form of the newt. After living some months as tadpoles swimming around in the water, they undergo another metamorphosis, sprouting legs and replacing their external gills with lungs. At this juvenile stage they are known as efts, and leave the water to live on land. A more gradual transition takes place then, as the eft takes on the lizard-like appearance of the adult newt.

67. Stereo knob TREBLE
Monophonic sound (“mono”) is sound reproduced using just one audio channel, which is usually played out of just one speaker. Stereophonic sound is reproduced using two audio channels, with the sound from each channel played out of two different speakers. The pair of stereo speakers are usually positioned apart from each other so that sound appears to come from between the two. Quadraphonic sound (4.0 surround sound) uses four audio channels with the sound played back through four speakers often positioned at the corners of the room in which one is listening.

70. Nine-ball feature STRIPE
Nine-ball is the most popular variant of the game of pool.

The more correct name for the game of pool is pocket billiards. The name “pool” came after pocket billiards became a common feature in “pool halls”, places where gamblers “pooled” their money to bet on horse races.

Down
2. “Who Needs the Kwik-E-Mart?” singer APU
The fictional Kwik-E-Mart store is operated by Apu Nahasapeemapetilon on “The Simpsons” TV show. The convenience store owner doesn’t seem to be making much use of his Ph.D in computer science that he earned in the US. Apu’s undergraduate degree is from Caltech (the Calcutta Technical Institute), where he graduated top of his class of seven million students …

7. Nelson, e.g.: Abbr. ADM
Admiral Horatio Nelson is noted for his victory at the Battle of Trafalgar. The battle was a decisive win for the British during the Napoleonic Wars, fought against the combined fleets of France and Spain. Nelson was fatally wounded by a marksman from one of the French ships, but as he was conscious he continued to monitor the battle, dying three hours after he was shot. Nelson was much revered by his crew who felt that his body had to be returned to England. The body was placed in a barrel full of brandy and the barrel lashed to the mainmast of the Victory and placed under guard. The damaged flagship was towed to Gibraltar where the body was transferred to a lead-lined coffin and the brandy replaced by aqua vitae (spirits of wine). While the body continued its journey home, dispatches reporting the outcome of the battle were carried to England on a ship called … HMS Pickle. A boozy end to a distinguished life …

12. Top of the world EVEREST
Mount Everest is the highest mountain on Earth at 29,029 feet above sea level. However, Everest is only the 5th tallest mountain as measured from the center of the planet. Because of the equatorial bulge, that honor goes to the volcano Chimborazo in Ecuador, part of the Andes.

18. He played James SEAN
Sean Connery is of course most famous for playing the original James Bond in the successful series of movies. Back in his native Scotland, Connery is very active in politics and is a member of the Scottish Nationalist Party. He actively campaigns for Scottish independence from Britain and has stated that he believes Scotland will achieve that goal within his own lifetime.

Sean Connery wasn’t the first choice for the role of James Bond. Six potential actors were selected for a screen test, after which a 28-year-old model was chosen called Peter Anthony. It turned out that Anthony wasn’t up to the part, and so second-choice Connery was given a call.

23. 2002 Olympics host, briefly SLC
The last Olympic Games held in the US was in Salt Lake City in 2002, a winter games. That made Utah the fifth US state to host the Olympics. The others were:

25. How shysters practice UNETHICALLY
“Shyster” is American slang for an unscrupulous lawyer, and is probably an alteration of the German word “Scheisser” meaning an incompetent and worthless person. “Scheisser” derives from an even less complimentary term “Sheisse”, the German for …. well, I won’t say it. But I will say as an aside that one of my son’s school friends told me one time that he didn’t really hold with the “Thank God It’s Friday” philosophy (TGIF), and was more into “So Happy It’s Thursday”. You can work it out …

29. Onetime Beatles bassist Sutcliffe STU
Stu Sutcliffe was one of the original four members of the Silver Beatles (as the Beatles were known in their early days) along with John Lennon, Paul McCartney and George Harrison. It was Sutcliffe who came up with name “Beatles” in collaboration with John Lennon, as a homage to their hero Buddy Holly who was backed by the “Crickets”. By all reports, Sutcliffe wasn’t a very talented musician and was more interested in painting. He went with the group to Hamburg more than once, but he eventually left the Beatles and went back to art school, actually studying for a while at the Hamburg College of Art. In 1962 in Hamburg, Sutcliffe collapsed with blinding headaches. He died in the ambulance on the way to hospital, his death attributed to cerebral paralysis.

41. Org. with an oft-quoted journal AMA
The American Medical Association (AMA) was founded in 1847 at the Academy of Natural Sciences in Philadelphia. The first female member was allowed to join the AMA in 1868, but the first African American members weren’t admitted until one hundred years later, in 1968.

46. Sugary suffix -OSE
The sugar we consume as “table sugar” is mainly sucrose that is extracted from sugar cane and sugar beet. We also consume lactose, naturally occurring in milk, and fructose, naturally occurring in fruit. But most of the sugar we eat or drink tends to be prepared commercially, the most famous being high-fructose corn syrup, which is glucose that is industrially processed into a glucose/fructose mix. Don’t get me started on the politics of food …

56. Audiophile’s setup HI-FI
Hi-fi systems were introduced in the late forties, and is audio equipment designed to give a much higher quality reproduction of sound than cheaper systems available up to that point. “Hi-fi” of course stands for “high fidelity”.

61. “Spring forward” letters DST
On the other side of the Atlantic, Daylight Saving Time (DST) is known as “summer time”. The idea behind summer/daylight-savings is to move clocks forward an hour in spring and backwards in the fall so that afternoons have more daylight.

63. Wildspitze, for one ALP
Wildspitze is a mountain in the Alps, the second highest peak in Austria (after the Grossglockner).