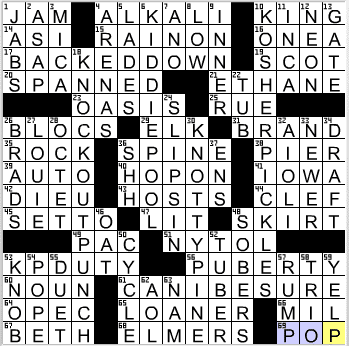 Today’s Wiki-est, Amazonian Googlies
Across
4. Its pH is more than 7 : ALKALI
As we all recall from chemistry class, a pH of 7 is considered neutral, and water is the primary example of a substance with a pH equal to seven. Anything less than 7 is an acid, and anything above 7 is a base.

16. Most eligible to be drafted : ONE A
The US government maintains information on all males who are potentially subject to military conscription, using what is called the Selective Service System(SS). In the event that a draft was held, men registered would be classified into groups to determine eligibility for service. Class 1-A registrants are those available for unrestricted military service. Other classes are 1-A-O (conscientious objector available for noncombatant service), 4-A (registrant who has completed military service) and 4-D (Minister of religion).

19. Sean Connery, by birth : SCOT
Sean Connery is of course most famous for playing the original James Bond in the successful series of movies. Back in his native Scotland, Connery is very active in politics and is a member of the Scottish Nationalist Party. He actively campaigns for Scottish independence from Britain and has stated that he believes Scotland will achieve that goal within his own lifetime.

21. Flammable gas : ETHANE
Ethane is the second largest component of natural gas, after methane. Ethane’s main use is in the production of ethylene, a compound that is widely used in the chemical industry.

23. Caravan’s watering hole : OASIS
The most famous oasis in the US is … Las Vegas, in the middle of the Mojave Desert.

“Caravan” derives from the Persian “karwan”, a word for a group of desert travelers. Over in the British Isles, “caravan” is the name we give to travel trailers.

29. Yosemite grazer : ELK
President Abraham Lincoln passed a bill in 1864 creating the Yosemite Grant, which was the first piece of federal legislature that set aside park land for preservation and public use. The Yosemite Grant paved the way for the creation of Yellowstone as the nation’s first national park in 1872.

39. Turnpike traveler : AUTO
Back in the 15th century a “turnpike” was a defensive barrier across a road. By the 17th century the term was used for a barrier that stopped travellers until a toll was paid. By the 18th century a turnpike was the name given to a road with a toll.

40. With 69-Across, Dr. Seuss classic : HOP ON
(69A. See 40-Across : POP)
“Hop on Pop” is a Dr. Seuss book that was first published in 1963, subtitled “The Simplest Seuss for Youngest Use”. “Hop on Pop” was listed by former First Lady Laura Bush as her favorite title, citing the memories evoked of family life with her young daughters.

41. State where Interstates 35 and 80 cross : IOWA
The state of Iowa was part of the French colony known as New France until it was acquired by the US in the Louisiana Purchase. The state’s name comes from the Ioway Native American people who lived there at the time European’s started exploring the area.

42. Prie-__: kneeler : DIEU
Prie-dieu literally means “pray (to) God” in French. A prie-dieu is basically a padded kneeler, with an armrest in front and a shelf on which one placed books of prayer.

44. Symbol before the sharps and flats : CLEF
Clef is the French word for “key”. In music, a clef is used to indicate the pitch of the notes written on the stave.

49. Influential D.C. group : PAC
A Political Action Committee (PAC) is a private group that works to influence the outcome of a particular election or group of elections. Any group becomes a PAC by law when it receives or spends more than $1,000 for the purpose of influencing the outcome of an election.

51. Medication for insomniacs : NYTOL
Nytol is a brand name for the drug diphenhydramine which is primarily used as an antihistamine. The drug also has a strong hypnotic effect and is used by some people as a non-prescription sleep aid.

53. Military mess assignment, and this puzzle’s title : KP DUTY
KP is a US military slang term, and stands for either “kitchen police” or “kitchen patrol”.

64. Oil cartel acronym : OPEC
The Organization of the Petroleum Exporting Countries (OPEC) was founded in 1960 at a conference held in Baghdad, Iraq that was attended by Iraq, Kuwait, Iran, Saudi Arabia and Venezuela. Nine more countries joined the alliance soon after, and OPEC set up headquarters in Geneva, Switzerland and then Vienna, Austria in 1965. The basic aim of OPEC was to wrench control of oil prices from the oil companies and to put it in the hands of the sovereign states that own the natural resource.

67. Second-youngest March sister, in literature : BETH
“Little Women” is of course a novel written by American author Louisa May Alcott. The quartet of little women is Meg, Jo, Beth and Amy March. Jo is a tomboy and the main character in the story and is based on Alcott herself.

68. __ Glue-All : ELMER’S
Elsie the Cow is the mascot of the Borden Company. Elsie first appeared at the New York World’s Fair in 1939, introduced to symbolize the perfect dairy product. Elsie was also given a husband named Elmer the Bull. Elmer eventually moved over to the chemical division of Borden where he gave his name to Elmer’s Glue.

Down
3. Flaky mineral : MICA
Mica is a mineral, a sheet silicate. Thin sheets of mica are transparent and are used in place of glass in certain applications. This form of mica is called isinglass, and as it has a better thermal performance than glass it is a great choice for “peepholes’ in boilers and lanterns. Mica is also used in the electronics industry, making use of its unique electrical and thermal insulating properties.

5. Puts on cargo : LADES
The verb “lade” meaning “to load” comes from an Old English word “hladan”. Lade also used to mean “to draw water” and indeed gave us our word “ladle”. So “lade” and “ladle” are close cousins.

7. 12 months in Madrid : ANO
In Spanish, we start years (años) in January (enero) as noted on a calendar (calendrio).

10. Deli sandwich freebies : KOSHER PICKLES
According to Jewish dietary law, “kosher” food is “fit” to eat, and food that is not kosher is called “treif” (or tref).

11. Ancient Peruvian : INCA
Spanish conquistador Francisco Pizarro discovered the Incas in 1526, marking the beginning of the end for an ancient civilization that was to be ravaged by brutal Spanish colonists and by imported smallpox. The last leader of the Inca was Atahualpa. Pizarro staged a mock trial and then condemned Atahualpa to execution by burning. A Spanish friar intervened on behalf of the condemned man, as Atahualpa believed that if he was burned his soul would not move on to the afterlife. Pizarro, was kind enough to have Atahualpa garroted instead.

12. Eye-catching sign : NEON
The basic design of neon lighting was first demonstrated at the Paris Motor Show in 1910. Such lighting is made up of glass tubes containing a vacuum into which has been introduced a small amount of neon gas. When a voltage is applied between two electrodes inside the tube, the neon gas “glows” and gives off the familiar light.

27. Huey and Dewey’s brother : LOUIE
Donald Duck’s nephews are identical triplets called Huey, Dewey and Louie, and they first appeared on the screen in 1938. Once in awhile due to errors in production, a fourth duck can be seen in the background. This little “mistake” is affectionately called “Phooey Duck” by folks in the industry.

32. Garlicky sauce : AIOLI
To the purist, especially in Provence in the South of France, the “home” of aioli, aioli is prepared just by grinding garlic with olive oil. However, other ingredients are often added to the mix, particularly egg yolks.

37. Nav. officer : ENS
Ensign is (usually) the most junior rank of commissioned officer in the armed forces. The name comes from the tradition that the junior officer would be given the task of carrying the ensign flag.

52. Yam, for one : TUBER
Although in the US we sometimes refer to sweet potatoes as “yams”, the yam is actually a completely different family of plants. True yams are more common in other parts of the the world than they are in this country, and are especially found in Africa.

54. Francis or John Paul II, e.g. : POPE
Pope Francis was elected on 13 March 2013 as the 266th Bishop of Rome and leader of the Roman Catholic church. The new pope appears to be taking a much simpler approach to the office, as he has done with his life back in Argentina. He is the first pope since 1903 not to reside in the papal residence, choosing to live instead to live in the less lavish Vatican guesthouse.

Pope John Paul II led the Catholic Church from 1978 until 2005, a period of over 26 years. That made him the second longest serving Pope in history, after Pius IX who reigned for over 31 years in the mid 1800s. Paradoxically, John Paul II’s predecessor was John Paul I who only ruled for 33 days. John Paul II was a native of Poland, and was the first non-Italian Pope to lead the church since 1523.

62. Internet giant that owns MapQuest : AOL
MapQuest is a very popular Internet site, one that provides driving directions and maps. MapQuest is actually owned by AOL.