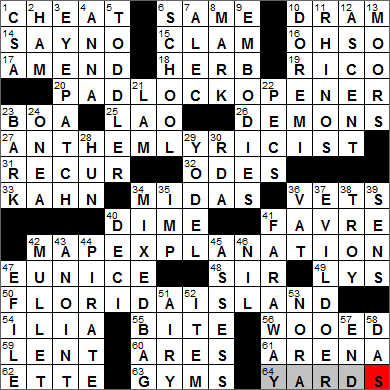 Today’s Wiki-est, Amazonian Googlies
Across
10. Apothecary’s measure DRAM
In the obsolete apothecary’s system of weights, one dram is equivalent to 60 grains, or three scruples.

15. Buck CLAM
“Buck” and “clam” are both slang terms for “a dollar”. The term “buck” has been around at least since 1856, and is thought to derive from the tradition of using buckskin as a unit of trade with Native Americans during the frontier days. It has been suggested that “clam” has a similar derivation, a throwback to the supposed use of clams as units of currency in ancient cultures.

19. “Copacabana” guy who “went a bit too far” RICO
The Copacabana of song is the Copacabana nightclub in New York City (which is also the subject of the Frank Sinatra song “Meet Me at the Copa”). The Copa opened in 1940 and is still going today although it is struggling. The club had to move due to impending construction and is now “sharing” a location with the Columbus 72 nightclub.

25. __-tzu LAO
Lao Tse (also Lao-Tzu) was a central figure in the development of the religion/philosophy of Taoism.

27. Key ANTHEM LYRICIST
The lyrics of “The Star-Spangled Banner” were written first as a poem by Francis Scott Key, inspired by the bombarding by the British of the American forces at Fort McHenry that he witnessed during the Battle of Baltimore in September 1814. The words were then set to the tune of a popular British drinking song penned by John Stafford Smith called “The Anacreontic Song”, with the Anacreontic Society being a men’s club in London.

36. Treaters of boxers VETS
The boxer breed of dog (one of my favorites!) originated in Germany. My first dog was a boxer/Labrador mix, a beautiful animal. Our current family dog is a boxer/pug mix, another gorgeous creature.

40. __ novel DIME
The genre of literature called “dime novels” originated with books from the 1860s called the “Beadle’s Dime Novel” series. Some of those books cost a dime, but many went for 15 cents.

41. Three-time NFL MVP FAVRE
Brett Favre is best known as the former starting-quarterback for the Green Bay Packers. Favre retired in 2010 after playing with the Minnesota Vikings for a short time. Among the many NFL records held by Favre, he has thrown the most career touchdown passes, and has made the most consecutive starts.

48. Mark Thackeray, to his students, in a 1967 film SIR
Mark Thackeray is the title character in the 1967 movie “To Sir, with Love”, and was played so very ably by Sidney Poitier.

“To Sir, with Love” is an excellent 1967 drama film starring Sidney Poitier. The film is about an inexperienced teacher in a tough school in the East End of London. If you see the movie keep a lookout for a couple of supporting actors. Lulu plays the student called Babs Pegg, and also sings the hit theme song from the movie. Patricia Routledge plays fellow teacher Clinty Clintridge, and later in her career played Hyacinth Bucket in the iconic BBC comedy series “Keeping Up Appearances”.

49. Fleur-de-__ LYS
“Lys” (also “lis”) is the French word for “lily”, as in “fleur-de-lys”, the heraldic symbol often associated with the French monarchy.

50. Key FLORIDA ISLAND
A “key” (also “cay”) is a low island offshore, as in the Florida Keys. Our term in English comes from the Spanish “cayo” meaning “shoal, reef”.

54. Hip bones ILIA
The sacrum and the two ilia are three bones in the human pelvis.

55. Calamine target BITE
Calamine is mainly zinc oxide, with a small percentage of iron oxide. Calamine is incorporated into a lotion that is used for many things, including treatment of sunburn and itching.

59. Period of sacrifice LENT
In Latin, the Christian season that is now called Lent was termed “quadragesima” (meaning “fortieth”), a reference to the forty days that Jesus spent in the desert before beginning his public ministry. When the church began its move in the Middle Ages towards using the vernacular, the term “Lent” was introduced. “Lent” comes from “lenz”, the German word for “spring”.

60. War god ARES
The Greek god Ares is often referred to as the Olympian god of warfare, but originally he was regarded as the god of blood-lust and slaughter. Ares united with Aphrodite to create several gods, including Phobos, Deimos and Eros. The Roman equivalent to Ares was Mars.

61. __ football ARENA
Arena Football is played indoors, on a smaller field that American (and Canadian) football. The sport was invented in 1981, and the Arena Football League (AFL) was around from 1987 till 2008. There’s a new AFL in business now, which started playing games in 2010 apparently.

63. 6-Down rooms GYMS
Our word “gymnasium” comes from the Greek “gymnasion” meaning “public place where exercise is taken”. The Greek term comes from “gymnos” meaning “naked”, as that physical training was usually done unclothed.

Down
1. Lee side: Abbr. CSA
The Confederate States of America (CSA) set up government in 1861 just before Abraham Lincoln took office. Jefferson Davis was selected as President of the CSA at its formation and retained the post for the life of the government.

2. Seuss title food HAM
Dr. Seuss was the pen name of Theodor Seuss Geisel. Geisel was commander of the Animation Department of the USAF during WWII. He was behind many propaganda films including one called “Our Job in Japan”. Even though the film was produced specifically as propaganda, this same movie was used after the war as a basis for the short feature “Design for Death”, a study of Japanese culture released in 1947 and winner of an Oscar for best Documentary.

4. Wintour of fashion ANNA
Anna Wintour is fashion editor in Britain, and is also the editor-in-chief of American “Vogue”. Lauren Weisberger wrote the book “The Devil Wears Prada” with the tyrannical main character apparently based on Wintour.

6. Hogwarts, e.g. SCHOOL
Hogwarts is of course the boarding school in the “Harry Potter” books.

7. Smart __ ALEC
Apparently the original “smart Alec” was Alec Hoag, a pimp, thief and confidence trickster who plied his trade in New York City in the 1840s.

10. “The Sound of Music” song DO-RE-MI
“The Sound of Music” is a Rodgers and Hammerstein musical, made into a celebrated movie in 1965 starring Julie Andrews and Christopher Plummer. The musical is based on “The Story of the Trapp Family Singers”, a memoir by Maria von Trapp. The von Trapp family ended up in Stowe, Vermont after the war, and one family descended from the Vermont von Trapps lives here in the same town in which I live in California.

11. Large-horned mammals RHINOS
There are five types of rhinoceros that survive today, and the smaller Javan Rhino is the most rare. The rhinoceros is probably the rarest large mammal on the planet, thanks to poaching. Hunters mainly prize the horn of the rhino as it is used in powdered form in traditional Chinese medicine.

13. Othello et al. MOORS
The most famous Moor in literature has to be Othello, the title character in William Shakespeare’s tragedy “Othello, the Moor of Venice”. The word “Moor” describes various peoples of North Africa, usually of the Muslim faith. At the height of their geographic influence the Moors occupied much of the Iberian peninsula, calling it Al Andalus (from which modern Andalusia gets its name).

21. Flee LAM
To be “on the lam” is to be in flight, to have escaped from prison. “On the lam” is American slang that originated at the end of the 19th century. The word “lam” also means to “beat” or “thrash”, as in “lambaste”. So “on the lam” might derive from the phrase “to beat it, to scram”.

22. Push-up targets PECS
“Pecs” is the familiar term for the chest muscle, more correctly known as the pectoralis major muscle.

23. Lab output? BARK
The Labrador breed of dog has been around at least since 1814, and the chocolate Labrador appeared over a century later in the 1930s.

24. Most fit for duty ONE-A
The US government maintains information on all males who are potentially subject to military conscription, using what is called the Selective Service System(SS). In the event that a draft was held, men registered would be classified into groups to determine eligibility for service. Class 1-A registrants are those available for unrestricted military service. Other classes are 1-A-O (conscientious objector available for noncombatant service), 4-A (registrant who has completed military service) and 4-D (Minister of religion).

28. Fifth-century invader HUN
The Huns were a nomadic people who originated in Eastern Europe in the 4th century. Under the command of Attila the Hun they developed a unified empire that stretched from modern-day Germany across to the steppes of Central Asia. The whole of the Hunnic Empire collapsed within a year of Attila’s death in 453 AD.

34. Hodgepodge MIXED BAG
“Hochepot” is an Old French word for stew or soup, and this gave rise to an Anglo-French legal term for a collection of property that was gathered prior to being divided up. This became our “hodgepodge” in the early 1400s.

35. Calvin of comics, for one IMP
The comic strip “Calvin and Hobbes” is still widely syndicated, but hasn’t been written since 1995. The cartoonist Bill Watterson named the character Calvin after John Calvin, the 16th century theologian. Hobbes was named for Thomas Hobbes a 17th century English political philosopher.

37. Superhero’s nemesis EVILDOER
Nemesis was a Greek goddess, the goddess of retribution. Her role was to make pay those individuals who were either haughty or arrogant. In modern parlance, one’s nemesis is one’s sworn enemy, often someone who is the exact opposite in character but someone who still shares some important characteristics. A nemesis is often someone one cannot seem to beat in competition.

42. Popular ’80s-’90s do MULLET
A mullet haircut is one that is short at the front and sides, and long in the back.

47. System used for most returns E-FILE
E-file: that’s what I do with my tax returns each year. I saved myself a fortune by saying a polite “goodbye” to my tax accountant five years ago and trusting Turbotax instead.

52. Two stars, maybe ITEM
An unmarried couple known to be involved with each other might appear in the gossip columns. This appearance as “an item” in the papers, led to the use of “item” to refer to such a couple, but only since the very early seventies. Brad Pitt and Angelina Jolie were an item in the gossip columns after they met on the set of the 2005 film “Mr. and Mrs. Smith”. Since then, they have unravelled their prior marriages and are now husband and wife with six children.

53. Asta’s “mom” NORA
Asta is the wonderful little dog in the superb movie “The Thin Man” starring William Powell and Myrna Loy (as Nick and Nora Charles). In the original story by Dashiell Hammett, Asta was a female Schnauzer, but on screen Asta was played by a wire-haired fox terrier called “Skippy”. Skippy was also the dog in “Bringing up Baby” with Cary Grant and Katharine Hepburn, the one who kept stealing the dinosaur bone. Skippy retired in 1939, so Asta was played by other dogs in the remainder of “The Thin Man” films.