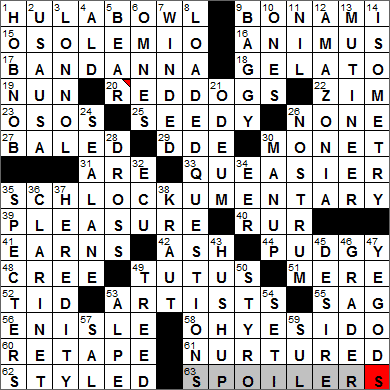 9. “Hasn’t scratched yet!” cleanser BON AMI
Bon Ami cleanser was introduced just a few years after Bon Ami soap went to market in 1886. The cleanser was marketed by emphasising its “non-scratch” properties. The label showed a chick coming out of an egg, the idea being that a newly hatched chick hasn’t yet scratched the ground looking for worms and insects.

15. Song played at the 1920 Olympics when music for the Italian national anthem could not be found O SOLE MIO
“‘O sole mio” is a famous Italian song from Naples, written in 1898. The song’s lyrics are usually sung in the original Neapolitan, as opposed to Italian. The title translates from Neapolitan into “My Sun” (and not into “O, My Sun” as one might expect). It’s a love song of course, sung by a young man declaring that there is a sun brighter than that in the sky, the sun that is his lover’s face. Awww …

18. Sorbetto alternative GELATO
Gelato is the Italian version of American ice cream, differing in that it has a lower butterfat content than its US counterpart.

“Sorbetto” is the Italian name for sorbet or sherbert.

20. Blitzes, in old football lingo RED DOGS
The maneuver in American football known as “the blitz” was supposedly first used in 1957 by the San Francisco 49ers. Back in the early sixties, blitzes were called “Red Dogs”, a term coined by 49er announcer Bob Fouts after his Irish Setter pet dog.

22. RSA neighbor, in the Olympics ZIM
The country now known as Zimbabwe started out as a British colony called Southern Rhodesia, named after Cecil Rhodes the British empire builder.

The Republic of South Africa (RSA)

26. “He who hath many friends hath __”: Aristotle NONE
Aristotle was actually a student of Plato in Ancient Greece (and in turn, Plato was a student of Socrates). Aristotle’s most famous student was Alexander the Great.

30. “Bouquet of Sunflowers” painter MONET
Claude Monet painted the harbor of Le Havre in the north of France in 1872, giving it the title “Impression, Sunrise”. The painting is not a “realistic” representation of the scene in front of him, hence the name “impression”. It was this very painting that gave rise to the name of the Impressionist movement.

35. Film based on junk science, say SCHLOCKUMENTARY
A film described as a “schlockumentary” is one that purports to be a well-researched documentary but in fact uses perhaps junk science or biased research to make a particular point.

40. Czech sci-fi play RUR
“R.U.R.” is a play written in Czech by Karel Capek, first produced in 1921. “R.U.R.” is a science fiction work and is remembered in part for introducing the world to the word “robot”. The words “automaton” and “android” were already in use, but Capek gave us “robot” from the original Czech “robota” meaning “forced labor”.

48. First Nations tribe CREE
The Cree are one of the largest groups of Native Americans on the continent. In the US most of the Cree nation live in Montana on a reservation shared with the Ojibwe people. In Canada most of the Cree live in Manitoba.

49. Skirts that come in bell and pancake styles TUTUS
The word “tutu”, used for a ballet dancer’s skirt, is actually a somewhat “naughty” term. It came into English from French in the early 20th century. The French “tutu” is an alteration of the word “cucu”, a childish word for “cul” meaning the “bottom,” or “backside”.

52. Rx instruction TID
“Ter” is the Latin word for “three”, commonly used in the medical world on prescriptions as part of the expression “ter in die”. “Ter in die” is Latin for “three times a day”, abbreviated to “TID”. “Bis in die” (BID) would be twice a day, and “quater in die” (QID) would be four times a day.

Down
1. Mingle (with) HOBNOB
The term “hobnob” dates back to the mid 1700s, and is derived from “hob and nob”, a phrase meaning to toast each other in turn, or to buy alternate rounds of drinks.

2. 1992 Dream Team chant USA! USA!
In 1989, the International Basketball Federation changed its rule requiring amateur status for participants in the Olympic Games (although prior to the ruling, European and South American professionals could play). So the US was able to field the “Dream Team” at the 1992 Olympics in Barcelona. Since the rules changed, the US won gold in four out of the five Olympic tournaments.

3. Cambodian leader ousted by the Khmer Rouge LON NOL
Lon Nol was a soldier and politician in Cambodia, later serving twice as the country’s president. When the Khmer Rouge took over Cambodia in 1975, Nol escaped the country to Indonesia. He eventually found a home in Fullerton, California, where he died in 1985.

4. City pol. ALD
The term “alderman” comes from English law, and is used for a member of a municipal assembly or council. In some locations in the US some cities have a Board of Aldermen instead of a city council.

11. Cipher NIL
The word “cipher” can be used for a person with no influence, a nonentity. The term comes from the Arabic “sifr” meaning “zero”. So, a cipher is a big nothing.

13. Bounty rebel MUTINEER
Charles Nordhoff and James Norman Hall wrote “Mutiny on the ‘Bounty'”, based on a true story. They followed up their successful novel with two more works, creating what is now called the “Bounty Trilogy”. The three books are:

21. Concert hall ODEUM
In Ancient Greece an odeon (also odeum) was like a small theater, with “odeon” literally meaning a “building for musical competition”. Odea were used in both Greece and Rome for entertainments such as musical shows and poetry readings.

26. Medicine show elixir NOSTRUM
“Nostrum” is an old Latin term for patent medicine, compounds sold as cures but that have no efficacy.

28. Refuse DROSS
When metals are smelted, there is a scum made up of impurities that floats on the surface of the molten metal. This scum is called “dross” and is drawn off and discarded. The term “dross” then came to mean any waste or impure matter.

32. Old coin with an accented first letter ECU
The écu was an Old French coin. When introduced in 1640, the écu was worth three livres (an older coin, called a “pound” in English). The word “écu ” comes from the Latin “scutum” meaning “shield”. The original écu had a coat of arms on it, a shield.

36. Licorice stick in a pit CLARINET
“Licorice stick” is a slang term for a clarinet, presumably because it is long and dark and is put in the mouth …

38. Brat topper KRAUT
“Sauerkraut” translates from German as “sour herb” or “sour cabbage”. During WWI, American sauerkraut producers changed its name in order to distance their product from “the enemy”. They called it “Liberty cabbage”.

50. Prefix in a Dow trademark STYRO-
Styrofoam is an extruded polystyrene foam made by The Dow Chemical Company. Styrofoam has loads of applications, including home insulation and use as a buoyancy aid.

54. “Contact” acronym SETI
SETI is the name given to a number of projects that are searching for extraterrestrial life. The acronym stands for “search for extraterrestrial intelligence”. One of the main SETI activities is the monitoring of electromagnetic radiation (such as radio waves) reaching the Earth in the hope of finding a transmission from a civilization in another world.

“Contact” is a sci-fi novel by Carl Sagan that was first published in 1985. Sagan had written “Contact” originally as a screenplay in 1979, but when plans for the film stalled, Sagan decided to go ahead and create the novel. An excellent film did eventually hit the theaters in 1997, and starred Jodie Foster.

The city of Oporto in Portugal gave its name to port wine in the late 1600s, as it was the seaport through which most of the region’s fortified wine was exported.