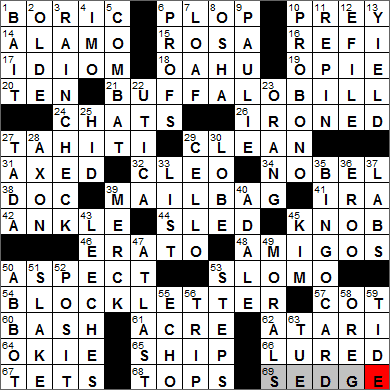 CROSSWORD SETTER: Gail Grabowski & Bruce Venzke
THEME: Mailbag … each of the themed answers ends with something found in a mailbag:

Today’s Wiki-est, Amazonian Googlies
Across
1. __ acid: antiseptic cleaner BORIC
Boric acid is a weak acid that usually comes as a white powder for domestic use. The powder can be dissolved in water and used as an antiseptic.

14. Texas shrine ALAMO
The famous Alamo in San Antonio, Texas was originally known as Mission San Antonio de Valero. The mission was founded in 1718 and was the first mission established in the city. The Battle of the Alamo took place in 1836, a thirteen-day siege by the Mexican Army led by President General Antonio Lopez de Santa Anna. Only two people defending the Alamo Mission survived the onslaught. One month later, the Texian army got its revenge by attacking and defeating the Mexican Army in the Battle of San Jacinto. During the surprise attack on Santa Anna’s camp, many of the Texian soldiers were heard to cry “Remember the Alamo!”.

15. Civil rights icon Parks ROSA
Rosa Parks was one of a few brave women in days gone by who refused to give up her seat on a bus to a white woman. It was the stand taken by Rosa Parks on December 1, 1955 that sparked the Montgomery, Alabama Bus Boycott. President Clinton presented Ms. Parks with the Presidential Medal of Freedom in 1996. When she died in 2005, Rosa Parks became the first ever woman to have her body lie in honor in the US Capital Rotunda.

19. Aunt Bee’s grandnephew OPIE
Aunt Bee was a character in “The Andy Griffith Show”. The character’s full name was Beatrice Taylor but everyone in Mayberry called her “Aunt Bee”. In the storyline she was the aunt of the protagonist, Sheriff Andy Taylor, and great-aunt to Andy’s son Opie. Aunt Bee was played by actress Frances Bavier.

21. Wild West showman BUFFALO BILL
Buffalo Bill Cody was a great showman after he retired from the US Army. While serving in the Army, Buffalo Bill was awarded the Medal of Honor. William Frederick Cody earned his “Buffalo Bill” nickname while supplying buffalo meat to the Kansas Pacific Railroad. Cody “hunted” and slaughtered over 4,000 American bison in an 18-month period to fulfill his contract with the railroad.

27. South Pacific island TAHITI
Captain Cook landed in Tahiti in 1769, although he wasn’t the first European to do so. But Cook’s visit to Tahiti was the most significant in that it heralded a whole spate of European visitors, who brought with them prostitution, venereal disease and alcohol. Paradoxically, they also brought Christianity. Included among the subsequent visitors was the famous HMS Bounty under the charge of Captain Bligh.

32. Egyptian portrayed by Liz CLEO
The 1963 movie “Cleopatra” really was an epic work. It was the highest grossing film of the year, taking in $26 million dollars at the box office, yet it still lost money. The original budget for the film was just $2 million, but so many things went wrong the final cost swelled to a staggering $44 million dollars, making it the second most expensive movie ever made (taking into account inflation). Elizabeth Taylor was supposed to earn a record amount of $1 million for the film, and ended up earned seven times that amount due to delays. But she paid dearly, as she became seriously ill during shooting and had to have an emergency tracheotomy to save her life. The scar in her throat can actually be seen in some of the shots in the film.

34. Prize with six categories NOBEL
The Peace Prize is the most famous of the five prizes bequeathed by Alfred Nobel. The others are for Physics, Chemistry, Physiology or Medicine, and Literature. There is also a Nobel Prize in Economics that is awarded along with the original five, but it is funded separately and is awarded “in memory of Alfred Nobel”. Four of the prizes are awarded by Swedish organizations (Alfred Nobel was a Swede) and so the award ceremonies take place in Stockholm. The Peace Prize is awarded by the Norwegian Nobel Committee, and that award is presented in Oslo.

38. Dwarf wearing specs DOC
In the original Brothers Grimm fairy tale called “Snow White”, the seven dwarfs were not given any names. The names were added for the 1937 classic Disney film “Snow White and the Seven Dwarfs”. The seven dwarfs are:

39. Sack on a red-white-and-blue truck, which can hold the ends of 21- and 54-Across and 3- and 35-Down MAILBAG
The US Postal Service (USPS) is a remarkable agency in many ways. For starters, the government’s right and responsibility to establish the Post Office is specifically called out in Article One of the US constitution. Also, the first postmaster general was none other than Benjamin Franklin. And the USPS operates over 200,000 vehicles, which is the largest vehicle fleet in the world.

42. A parolee may wear a monitor on it ANKLE
The term “parole” is a French word that we use in English, with the French “parole” meaning “word, speech”. Of particular interest is the French phrase “parole d’honneur” which translates as “word of honor”. In the early 1600s we started using “parole” to mean a promise by a prisoner of war not to escape, as in the prisoner giving his “word of honor” not to run off. Over time, parole has come to mean conditional release of a prisoner before he or she has served the full term of a sentence.

46. Muse who inspires poets ERATO
In Greek mythology, Erato was the Muse of Lyric Poetry.

54. Character written in kindergarten BLOCK LETTER
“Kindergarten” is of course a German term, literally meaning “children’s garden”. The term was coined by the German education authority Friedrich Fröbel in 1837, when he used it as the name for his play and activity institute that he created for young children to use before they headed off to school. His thought was that children should be nourished educationally, like plants in a garden.

61. Good-sized home site ACRE
At one time, an acre was defined as the amount of land a yoke of oxen could plow in a day. This was more precisely defined as a strip of land one furlong long (660 feet) and one chain wide (66 feet). The word “furlong” is actually derived from the Old English words meaning “furrow long”, the length of the furrow plowed by the oxen.

62. Arcade pioneer ATARI
At one point, the electronics and video game manufacturer Atari was the fastest growing company in US history. However, Atari never really recovered from the video game industry crash of 1983.

64. Dust Bowl refugee OKIE
The Dust Bowl was the name given to a period in which severe dust storms ravaged the American and Canadian Prairies in the thirties. A major factor in the storms was the loss of the deep-rooted grasses native to the land that had been displaced by intensive farming. Without the grasses, the topsoil was blown away in a period of drought.

Down
2. Shoppe adjective OLDE
The word “olde” wasn’t actually used much earlier than the 1920s. “Olde” was introduced to give a quaint antique feel to brand names, shop names etc.

3. Ticket from a postponed ball game RAINCHECK
The use of “rainchecks” dates back to the 1880s, where they were originally tickets issued at rained out baseball games, guaranteeing free entry to a make-up game.

8. Dept. of Labor protection arm OSHA
The Occupational Safety and Health Administration (OSHA) was created in 1970 during the Nixon administration. OSHA regulates workplaces in the private sector and regulates just one government agency, namely the US Postal Service.

9. Talking parrot of film PAULIE
“Paulie” is a film released in 1998 about the adventures of a talking parrot named Paulie. One of the claims to fame of the movie is that Buddy Hackett makes an appearance, his last film role.

10. Free, as legal work PRO BONO
The Latin term “pro bono publico” means “for the public good”, and is usually shorted to “pro bono”. The term applies to professional work that is done for free or at a reduced fee as a service to the public.

12. Use TurboTax, say E-FILE
E-file: that’s what I do with my tax returns each year. I saved myself a fortune by saying a polite “goodbye” to my tax accountant five years ago and trusting Turbotax instead.

22. New York city UTICA
Today, Utica in New York is known as “Second Chance City” due to the recent influx of refugees from war-torn parts of the world, and from Bosnia in particular. These immigrants have helped revitalize the area and reverse a trend of population loss.

23. Malaysian ape ORANG
Orangutans are arboreal creatures, in fact the largest arboreal animals known to man. They are native to Indonesia and Malaysia, living in the rain forests. Like most species in rain forests these days, orangutans are endangered, with only two species surviving. The word “orangutan” is Malay, meaning “man of the forest”.

28. Neural transmitter AXON
A nerve cell is more correctly called a neuron, and the long nerve fiber that is part of a neuron is called the axon.

29. Yo-Yo Ma’s instrument CELLO
Yo-Yo Ma is a marvelous American cellist, born in Paris to Chinese parents. Ma started studying the violin when he was very young, working his way up (in size) to the viola and finally to the cello. He has said that he wanted to play the double bass, but it was just too big for his relatively small frame.

37. “CSI” facilities LABS
I’m told that the TV show “CSI” (which stands for “Crime Scene Investigation”) gets a lot of razzing by law enforcement professionals for its unrealistic portrayal of the procedures and science of criminal investigation. I don’t care though, as I just think it’s fun television. The original “CSI” set in Las Vegas seems to have “gone off the boil”, but the addition of Sela Ward to the cast of “CSI: NY” really, really raised the level of the sister show centered around New York City.

45. Actress Basinger KIM
Kim Basinger’s big break in movies came when she played a Bond girl, Domino Petachi in “Never Say Never Again” opposite Sean Connery. Basinger’s more famous roles were in “L.A. Confidential”, “9½ Weeks” and “8 Mile”. My personal favorite of her films though was the thriller “Cellular”, released in 2004.

51. Quench SLAKE
“To slake” is to satisfy a craving, as in slaking one’s thirst.