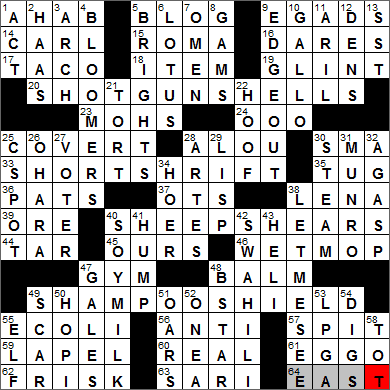 CROSSWORD SETTER: Jack McInturff
THEME: Sh! Sh! … each of the themed answers is made up of two words, each starting with the letters SH:

Today’s Wiki-est, Amazonian Googlies
Across
1. Pequod captain AHAB
Captain Ahab is the obsessed and far from friendly Captain of the Pequod in Herman Melville’s “Moby Dick”.

5. Online diary BLOG
“Blog” is a melding of the words “Web” and “log”. My two blogs are “logs” of all the New York Times and Los Angeles Times crosswords published, and I post them on the “Web” at NYTCrossword.com and LAXCrossword.com.

14. Sagan of “Cosmos” CARL
Carl Sagan was a brilliant astrophysicist and a great communicator. Sagan was famous for presenting obscure concepts about the cosmos in such a way that we mere mortals could appreciate. He also wrote the novel “Contact” which was adapted into a fascinating 1997 film of the same name starring Jodie Foster.

23. Talc-to-diamond hardness scale inventor MOHS
The Mohs scale of mineral hardness was developed in 1812 by Freidrich Mohs. Basically Mohs took minerals and scratched them with other minerals. In this way he was able to determine which minerals were hardest (most scratch resistant) and which softest.

24. Tic-tac-toe win OOO
When I was growing up in Ireland we played “noughts and crosses” … our name for the game tic-tac-toe.

28. Baseball family name ALOU
Jesus Alou played major league baseball, as did his brothers Matty and Felipe, and as does Felipe’s son, Moises.

A tam o’shanter is a man’s cap traditionally worn by Scotsmen. “Tams” were originally all blue (and called “blue bonnets”), but as more dyes became readily available they became more colorful. The name of the cap comes from the title character of Robert Burns’ poem “Tam O’Shanter”.

33. Little consideration SHORT SHRIFT
The Old English term “scrift” was used to describe confession to a priest followed by penance and absolution. The term “short shrift” developed from “scrift”, and was a brief period given to a condemned criminal to confess his sins before execution. We now use “short shrift” to mean “little or no consideration”.

36. Squares with dinner rolls PATS
A “pat” of butter is so called because of the tradition of forming it by “patting”.

38. Olin of “Alias” LENA
The lovely Lena Olin is a Swedish actress, clearly someone who had acting in her blood. Her mother was the actress Britta Holmberg and her father the actor and director Stig Olin. Olin had a very successful career in Sweden, often working with the great Ingmar Bergman. Olin’s breakthrough international and English-speaking role was playing opposite Daniel Day-Lewis in “The Unbearable Lightness of Being” released in 1988. Way back in 1974, the lovely Miss Olin was crowned Miss Scandinavia in a beauty pageant for Nordic women held in Helsinki, Finland. Olin’s most famous performance was in “Chocolat” released in 2000, and then she won an Emmy in 2003 for Best Supporting actress in the TV show “Alias”.

39. Lode load ORE
A lode is metal ore deposit that’s found between two layers of rock or in a fissure.

44. Road crew goo TAR
“Tarmac” and “macadam” is of course short for “tarmacadam”. In the 1800s, Scotsman John Loudon McAdam developed a style of road known as “macadam”. Macadam had a top-layer of crushed stone and gravel laid over larger stones. The macadam also had a convex cross-section so that water tended to drain to the sides. In 1901, a significant improvement was made by English engineer Edgar Purnell Hooley who introduced tar into the macadam, improving the resistance to water damage and practically eliminating dust. The “tar-penetration macadam” is the basis of what we now call Tarmac.

55. Reason for some food recalls E COLI
Escherichia coli (E. coli) are usually harmless bacteria found in the human gut, working away quite happily. However, there are some strains that can produce lethal toxins. These strains can make their way into the food chain from animal fecal matter that comes into contact with food designated for human consumption.

61. “Contents could cause Dad to make breakfast” brand EGGO
Eggo is the brand name of a line of frozen waffles made by Kellogg’s. When they were introduced in the 1930s, the name “Eggo” was chosen to promote the “egginess” of the batter. “Eggo” replaced the original name chosen, which was “Froffles”, created by melding “frozen” and “waffles”.

63. Indian dress SARI
The item of clothing called a “sari” (also “saree”) is a strip of cloth, as one might imagine, unusual perhaps in that is unstitched along the whole of its length. The strip of cloth can range from four to nine meters long (that’s a lot of material!). The sari is usually wrapped around the waist, then draped over the shoulder leaving the midriff bare. I must say, it can be a beautiful item of clothing.

Down
2. Lukas of “Witness” HAAS
Lukas Haas is an American actor best known for the role he played as an 8-year-old child in the excellent 1985 film “Witness”. In “Witness” Haas played a young Amish boy, alongside Harrison Ford and Kelly McGillis. Although Haas still acts today, he is also a musician and plays drums and piano for a band called The Rogues.

8. Looker’s legs GAMS
The American slang term “gams” is used for a woman’s legs, but the term goes back to the 18th century “gamb” meaning the leg of an animal on a coat of arms.

10. Winemaking giant GALLO
E J Gallo Winery was founded by Ernest and Julio Gallo in Modesto, California in 1933. Gallo is the largest exporter of wine from the State of California.

11. Seed pod ARIL
The casing surrounding many seeds is called the aril, and it may be quite fleshy. This fruit-like characteristic makes it desirable as a food and aids in the dispersion of the seeds.

13. Old jet set jet, briefly SST
The most famous Supersonic Transport (SST) was the Concorde, a plane that’s no longer flying. Concorde had that famous “droop nose”. The nose was moved to the horizontal position during flight to create the optimum aerodynamic shape thereby reducing drag. It was lowered during taxi, takeoff and landing, so that the pilot had better visibility. The need for the droop nose was driven largely by the delta-shaped wings. The delta wing necessitates a higher angle of attack at takeoff and landing than conventional wing designs, so the pilot needed the nose lowered so that he or she could see the ground.

21. Legal wrong TORT
The word “tort” is a French word meaning “mischief, injury or wrong”. Tort law is generally about negligence, when the action of one party causes injury to another but that action falls outside of the scope of criminal law.

22. Filly’s foot HOOF
A filly is a young female horse.

29. Daffy Duck has one LISP
Daffy Duck first appeared on the screen in “Porky’s Duck Hunt” in 1937. In the original cartoon, Daffy was just meant to have a small role, but he was a big hit as he had so much sass. Even back then, Daffy was voiced by the ubiquitous Mel Blanc.

40. Coffee additive for the lactose intolerant SOY MILK
What are known as soybeans here in the US are called “soya beans” in most other English-speaking countries. So, I drink soy milk here in America, but when I am over in Ireland I drink “soya milk”.

48. Massive, relatively hot luminous body B STAR
Stars are usually classified based on the color of the light that they emit. These classifications are, from hottest to coolest, O, B, A, F, G, K and M. One way to remember the order of these letters is to use the mnemonic “Oh, be a fine girl, kiss me”. The colors of these stars range from blue (class O) to red (class M). Our sun is class G, a yellow star, but I think we all know that …

50. Pueblo Indian HOPI
The Hopi nation live on a reservation that is actually located within the much larger Navajo reservation in Arizona.

52. Draft category ONE-A
The US government maintains information on all males who are potentially subject to military conscription, using what is called the Selective Service System. In the event that a draft was held, men registered would be classified into groups to determine eligibility for service. Class 1-A registrants are those available for unrestricted military service. Other classes are 1-A-O (conscientious objector available for noncombatant service), 4-A (registrant who has completed military service) and 4-D (Minister of religion).

53. Nancy Lopez’s org. LPGA
Nancy Lopez is an American professional golfer and winner of 48 LPGA Tour events. Lopez turned professional in 1997 and retired in 2003. However, she came out of retirement in 2007 and is still playing today.