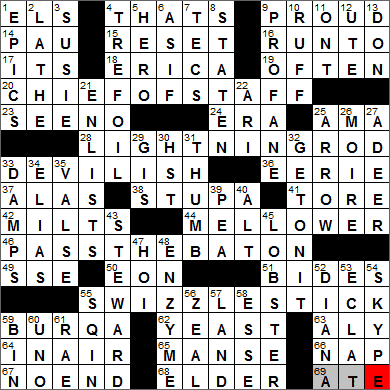 CROSSWORD SETTER: Joel D. Lafargue
THEME: The Bar at the End … each of today’s themed answers ends with a type of bar or pole:

20A. Member of a “joint” military group CHIEF OF STAFF
28A. Franklin invention LIGHTNING ROD
46A. Make a relay race connection PASS THE BATON
55A. Cocktail accessory SWIZZLE STICK

14. 2002 NBA Rookie of the Year __ Gasol PAU
Pau Gasol is a Spanish basketball player who turns out for the Los Angeles Lakers. Pau’s younger brother is Marc, who plays for the Memphis Grizzlies.

18. Author Jong ERICA
The author Erica Jong’s most famous work is her first: “Fear of Flying”, a novel published in 1973. Over twenty years later she wrote “Fear of Fifty: a midlife memoir”, published in 1994.

20. Member of a “joint” military group CHIEF OF STAFF
In the US Military, the Joint Chiefs of Staff is comprised of:

23. “__ evil …” SEE NO
The old adage “see no evil, hear no evil, speak no evil” originated in the 17th century. The phrase comes as an interpretation of a wood carving over a door in a shrine in Nikko, Japan. The carving depicts the “Three Wise Monkeys”:

25. Pub. of an oft-quoted journal AMA
The AMA has been publishing the Journal of the American Medical Association (JAMA) since 1883.

28. Franklin invention LIGHTNING ROD
The noted polymath Benjamin Franklin was one of the US’s Founding Fathers. Franklin was born into a working class family in Boston in 1706. He went on to invent the lightning rod and bifocals. He became the first US Ambassador to France, the US’s Postmaster General and the Governor of Pennsylvania. He played the violin, the harp and the guitar and composed a string quartet. He was also an accomplished chess player, the first to be known by name in the American colonies. The list of the Benjamin Franklin’s accomplishments seems to be endless …

36. Like much of King’s work EERIE
Stephen King is a remarkably successful author having sold over 350 million copies of his books, many of which have been made into hit movies. I’ve tried reading two or three, but I really don’t do horror …

38. Buddhist shrine STUPA
A stupa is a place of worship in the Buddhist tradition. “Stupa” is a Sanskrit word meaning “heap” and a stupa is a mound-like structure that contains relics, possibly even the remains of Buddha.

42. Jazzman Jackson and cartoonist Gross MILTS
Milt Jackson was a jazz vibraphonist. A vibraphone is a similar to a xylophone, but it has aluminum instead of wooden bars. Vibraphones are most commonly seen as part of jazz ensembles. Milt Jackson started his career as part of the band playing with Dizzy Gillespie.

50. Billion-year span EON
In astronomical terms, an aeon (also “eon”) is defined as one billion years.

59. Traditional Islamic garment BURQA
A burqa (also “burka”) is the garment worn by some women in the Islamic tradition to cover up their bodies when in public.

63. One of the Khans ALY
Aly Khan was a familiar name used by the media when referring to Prince Ali Solomone Aga Khan, the Pakistani ambassador to the UN from 1958 to 1960. Khan made it into the papers a lot as he was the third husband of actress Rita Hayworth.

64. Words before “Gave proof through the night” IN AIR

“And the rocket’s red glare, the bombs bursting in air,
Gave proof through the night that our flag was still there”

are lines from “The Star-Spangled Banner”.

65. Clerical residence MANSE
A manse is a minister’s home in various Christian traditions. “Manse” derives from “mansus”, the Latin for “dwelling”. The term can also be used for any stately residence.

4. Girl Scouts emblem TREFOIL
A trefoil is a symbol that appears like a trifoliate leaf, a leaf with three leaf-like parts.

7. Sleuths, briefly TECS
The word “sleuth” came into English from Old Norse as far back as 1200 when it meant the “track or trail of a person”. In the mid-1800s, a sleuthhound described a keen investigator, a hound close on the trail of the suspect. Sleuthhound was shortened to “sleuth” and was used for a detective in general.

8. New York’s __ Island STATEN
Staten Island is part of New York City and is the least populous of the city’s five boroughs. The island was originally called Staaten Eylandt by Henry Hudson and was named after the Dutch parliament, the Staaten Generaal.

10. Win by trumping, in bridge RUFF
In a trick-taking game like bridge or whist, “to ruff” is to take a trick using a trump, unless a trump is the first card played in the trick. Some people use the verb “to trump” instead of “to ruff”.

11. Que. neighbor ONT
The ten Canadian provinces are, alongside their accepted abbreviations:

12. Beehive State native language UTE
The Uto-Aztecan language family consists of about 30 languages spoken in the Western United States and Mexico. Included in the list of Uto-Aztecian languages is Ute, Comanche and Hopi.

13. Put on DON
One doffs one’s hat, usually as a mark of respect. To doff is to take off, with “doff” being a contraction of “do off”. The opposite of “doff” is “don”.

22. Bush spokesman Fleischer ARI
Ari Fleischer was the White House Press Secretary for President George W. Bush. Fleischer now runs his own media consulting firm that specializes in representing sports players and organizations. Fleischer helped Mark McGwire handle the media when he had to admit to the use of steroids, and was briefly hired by Tiger Woods as he planned his return to the PGA after dropping out of the spotlight to handle the problems in his personal life.

29. APO mail recipients GIS
The initials “G.I.” stand for “Government Issue” and not “General Infantry” as is often believed. GI was first used in the military to denote equipment made from Galvanized Iron and during WWI, incoming German shells were nicknamed “GI cans”. Soon after, the term GI came to be associated with “Government Issue” and eventually became an adjective to describe anything associated with the Army.

30. FDR’s successor HST
Harry Truman wanted to go to West Point having served with the Missouri Army National Guard on active duty in WWI, but he couldn’t get in because of his poor eyesight. Young Truman didn’t have the money to pay for college anywhere else. He did manage to study for two years towards a law degree at the Kansas City Law School in the twenties, but he never finished his schooling. So, Harry S. Truman was the last US President (out of a list of ten) who did not have a college degree.

31. Opposable digit THUMB
Most animals don’t have that all important “opposable thumb” that allows us to work so efficiently with our hands.

34. Inventor Howe ELIAS
Elias Howe was an American inventor. Howe wasn’t the first to come up with the idea of a sewing machine, but he was the first to develop one that was functional.

35. Ballroom dance, in Burgundy VALSE
“Valse” is the French for “waltz”.

The Burgundy region of France is famous for its wine production. If you’re looking at a label that isn’t translated into English though, you’ll see Burgundy written in French, namely “Bourgogne”.

47. __ polloi HOI
“Hoi polloi” is a Greek term, literally meaning “the majority, the many”. In English, “hoi polloi” has come to mean “the masses” and is often used in a derogatory sense.

48. Digestive protein ENZYME
Enzymes are basically catalysts, chemicals that act to increase the rate of a particular chemical reaction. For example, starches will break down into sugars over time, especially under the right conditions. However, in the presence of the enzyme amylase (found in saliva) this production of sugar happens very, very quickly.

52. Rigg who played Mrs. Peel DIANA
“The Avengers” was must-see television when I was growing up. “The Avengers” was a sixties comedy spy series set in England during the days of the Cold War. The hero was John Steed, played ably by Patrick MacNee. Steed had various female partners as the series progressed, the first of which was Cathy Gale, played by Honor Blackman (who also played Pussy Galore in “Goldfinger”). Following Ms. Gale was Emma Peel played by the wonderful Diana Rigg. Finally there was Tara King, played by Linda Thorson.

53. Brilliance ECLAT
Éclat can mean a brilliant show of success, or the applause or accolade that one receives. The word derives from the French “éclater” meaning “to splinter, burst out”.

54. Internet calling service SKYPE
The main feature of the Skype application is that it allows voice communication to take place over the Internet (aka VoIP). Skype has other features such as video conferencing and instant messaging, but the application made its name from voice communication. Skype was founded by two Scandinavian entrepreneurs and the software necessary was developed by a team of engineers in Estonia. The development project was originally called “Sky peer-to-peer” so the first commercial name for the application was “Skyper”. This had to be shortened to “Skype” because the skyper.com domain name was already in use.

60. Colorful card game UNO
In my youth I remember being taught a great card game, by a German acquaintance of mine, called Mau Mau. Years later I discovered that Uno is basically the same game, but played with a purpose-printed deck instead of the regular deck of playing cards that’s used for Mau Mau. I hear that Mau Mau is derived from the game called Crazy Eights.

61. Actress Charlotte RAE
Charlotte Rae is an American actress, best known for playing the character Edna Garrett on two sitcoms from the seventies and eighties: “Diff’rent Strokes” and “The Facts of Life”. Towards the end of the series, the Edna Garrett character operated her own gourmet food shop called “Edna’s Edibles”.