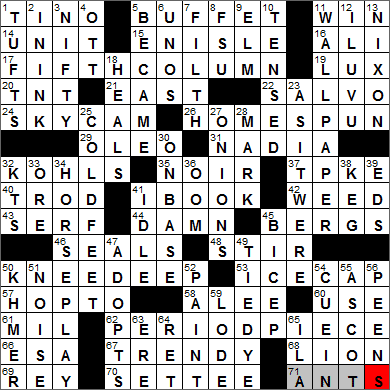 17A. Article about a bottle of whiskey? FIFTH COLUMN
62A. Essay for grammar class? PERIOD PIECE
11D. Report on the site of the Humpty-Dumpty tragedy? WALLPAPER
34D. Drama about Trigger? HORSEPLAY

Today’s Wiki-est, Amazonian Googlies
Across
1. ’90s-’00s first baseman Martinez TINO
Tino Martinez has retired from Major League Baseball. Martinez played first base for a number of teams including the Mariners, Yankees, Cardinals and Devil Rays. Martinez was born and raised in Tampa, Florida and as a boy he worked in his father’s cigar factory.

16. Old ring leader? ALI
Cassius Marcellus Clay, Jr. was born in 1942 in Louisville, Kentucky. Clay changed his name to Muhammad Ali when he converted to Islam in 1964. Who can forget Muhammad Ali lighting the Olympic flame for the 1996 games in Atlanta? Ali was presented with a gold medal during those ’96 Games, a replacement for the medal he won at the 1960 Olympics. He had thrown the original into the Ohio River as a gesture of disgust after being refused service at a “whites only” restaurant.

17. Article about a bottle of whiskey? FIFTH COLUMN
“Fifth column” is the name given to a group of people who work from within to undermine or sabotage a nation or larger group. The term originated during the Spanish Civil War and was coined by General Emilio Mola who said that he had four columns of troops approaching Madrid and a “fifth column” of supporters within the city who would rise and up assist the regular troops.

A “fifth” is an American unit of volume used for liquor. It used to be equal to one fifth of a US gallon. Since the seventies we’ve been using a “metric fifth” which is equal to 750 mL, the standard size for wine bottles around the world.

19. Bar in the shower LUX
The British company Lever Brothers introduced a brand of household soap known as Sunlight in 1884. A flaked version of Sunlight was then introduced first in India, under the brand name “Lux”. The same name was used when the product was launched in the US in 1916. The flaked form of soap meant that much less lye was needed as an ingredient, making a “gentler” product. So, in the US, the original marketing hook was to use Lux for laundering a woman’s “delicates” without fear of lye yellowing the satins and silks.

20. Blowup cause TNT
TNT is an abbreviation for trinitrotoluene. Trinitrotoluene was first produced in 1863 by the German chemist Joseph Wilbrand, who developed it for use as a yellow dye. TNT is relatively difficult to detonate so it was on the market as a dye for some years before its more explosive properties were discovered.

22. Loud salute SALVO
A salvo is a simultaneous discharge of guns. Ironically, “salvo” comes from the Latin “salve” meaning “be in good health”. Salvo was originally the name given to the firing of guns in the air as a sign of respect or greeting for an important visitor. Good health!

29. Bar in the kitchen OLEO
Emperor Louis Napoleon III of France announced a competition to develop a substitute for butter, a substitute that would be more accessible to the lower classes and more practical for the armed forces. In 1869, a French chemist called Hippolyte Mege-Mouries came up with something that he called oleomargarine, which was eventually manufactured under the trade name “margarine”. The name “oleomargarine” also gives us our generic term “oleo”.

31. Composer/conductor Boulanger NADIA
Nadia Boulanger was a composer and music teacher from Paris. Included in her impressive list of students were Aaron Copland, Quincy Jones and Philip Glass. Boulanger was also the first woman to conduct some respected orchestras including the BBC Symphony, the Boston Symphony, the Hallé, the New York Philharmonic and the Philadelphia.

32. Macy’s competitor KOHL’S
Kohl’s is a department store chain with its headquarters in a suburb of Milwaukee, Wisconsin. The store takes its name from the founder, Maxwell Kohl.

The original Macy’s store was opened by Rowland Hussey Macy in Haverhill, Massachusetts in 1851. This store, and several others that Macy opened, all failed. Macy picked himself up though, and started over again in New York City. Those early New York stores all focused on the sale of dry goods, but added departments quickly as the clientele grew. The Macy’s “star” logo has been around since the company was first established. Macy chose the star because it mimicked the star tattoo that he got as a teenager when he was working on a whaling ship out of Nantucket.

37. Hardly a back rd. TPKE
Back in the 15th century a “turnpike” was a defensive barrier across a road. By the 17th century the term was used for a barrier that stopped travellers until a toll was paid. By the 18th century a turnpike was the name given to a road with a toll.

43. One born unfree SERF
A serf was a member of the lowest feudal class, someone attached to land owned by a lord. “Serf” comes from the Latin “servus”, meaning “slave”.

45. Antarctic phenomena BERGS
An iceberg is a large piece of freshwater ice that is floating freely after having broken off from a glacier or ice shelf. Out use of “iceberg” comes from the Dutch word for the same phenomenon “ijsberg”, which translates literally as “ice mountain”.

58. Downwind ALEE
“Alee” is the direction away from the wind. If a sailor points into the wind, he or she is pointing “aweather”.

70. Den piece SETTEE
“Settee” is another word for a couch. The term come from the Old English “setl”, which was a long bench with a high back and arms.

Down
1. New England school with a campus in the French Alps TUFTS
Tufts University is a private school near Boston. The school was built in 1852 on land donated by Charles Tuft a local businessman. One of the early benefactors of the school was P. T. Barnum who funded the Barnum Museum of Natural History located on the college grounds. This museum is home to the stuffed hide of Jumbo, the famous elephant. Jumbo is the school’s mascot.

8. Seminoles’ sch. FSU
Florida State University (FSU) is located in Tallahassee, the state capital of Florida. The school’s athletic teams are known as the Seminoles. The team name was chosen in 1947 by the students in a vote, and alludes to the Seminole people who originally lived in the state. Most of the Seminole now live in Oklahoma, after their forced relocation by the US government in the 1840s.

9. Certain leaf beetle’s target ELM
Dutch elm disease is a fungus devastating to all species of elm trees that is transmitted by the elm bark beetle. The disease is thought to have originated in Asia and is now rampant in Europe and North America. Even though there is a hybrid of elm known as the Dutch elm, the disease isn’t named after the tree. Rather, the disease is called “Dutch” as it was identified in 1921 by a phytopathologist (plant pathologist) in the Netherlands.

11. Report on the site of the Humpty-Dumpty tragedy? WALLPAPER
Humpty Dumpty is a character in a nursery rhyme, actually an egg although that isn’t specifically called out in the original rhyme:

12. Candy heart message I LUV U
The forerunner to Sweethearts candy was introduced in 1866, with the famous sayings written on the candy tailored for use at weddings. One of the original expressions was, “Married in pink, he will take a drink”. The original candy was a lot bigger, to fit all those words! The smaller, heart-shaped candy hit the shelves in 1901. We’ve been able to buy Sweethearts with the words “Text me” since 2010.

13. “__ in China”: John Adams opera NIXON
“Nixon in China” is an opera by John Adams, libretto by Alice Goodman. The piece was of course inspired by President Nixon’s famous visit to China in 1972.

John Adams is a composer now based in California. Adams gained prominence with his 1987 opera “Nixon in Paris”. His works are usually described as in the minimalist genre. I had the privilege of hearing a work of his called “Absolute Jest” in San Francisco recently, in the presence of the composer.

32. Valuable rock nos. KTS
I know that “karat” is a variant spelling of “carat”, the measure of the purity of gold. I don’t recall seeing “karat” used as a variant of “carat”, the unit of mass used in measuring gemstones. Again, I might have missed something …

34. Drama about Trigger? HORSEPLAY
Roy Rogers had a famous horse, a palomino named Trigger. When Rogers met up with Trigger, he was a “horse-for-rent” who appeared regularly in films. He was called Golden Cloud back then, and one of the horse’s roles was as the mount of Maid Marian, played by Olivia de Havilland in “The Adventures of Robin Hood”. After Rogers rode Golden Cloud in his first major movie, he bought him and renamed him Trigger.

36. Tuba player’s mantra? OOM
A “mantra” is a word that is used as a focus for the mind while meditating.

The tuba is the lowest pitched of all the brass instruments, and one of the most recent additions to the modern symphony orchestra (usually there is just one tuba included in an orchestral line-up). “Tuba” is the Latin word for “trumpet, horn”. Oom-pah-pah …

39. Mag wheels? EDS
Editors are big wheels at a magazine.

45. __ curls BICEP
The biceps muscle is made up of two bundles of muscle, both of which terminate at the same point near the elbow. The heads of the bundles terminate at different points on the scapula or shoulder blade. “Biceps” is Latin for “two-headed”.

52. Manet’s medium PAINT
The French painter Édouard Manet is responsible for many great works including “Le déjeuner sur l’herbe” (The Luncheon on the Grass”) , a work you can see in the Musée d’Orsay in Paris.

55. Race site for 300+ years ASCOT
Ascot Racecourse is used for thoroughbred horse racing, and is located in the town of Ascot, Berkshire in England. The course is located just six miles from Windsor Castle, and is often visited by members of the royal family. Royal Ascot is the name given to the most famous race meeting in the year, at which members of the royal family attend each day, arriving in horse-drawn carriages amidst great ceremony.

56. Rounded hand-tool parts PEENS
The peen of a hammer is on the head, and is the side of the head that is opposite the striking surface. Often the peen is in the shape of a hemisphere (as in a ball-peen hammer), but usually it is shaped like a claw (mainly for removing nails).

59. Rock band? LODE
A lode is metal ore deposit that’s found between two layers of rock or in a fissure.