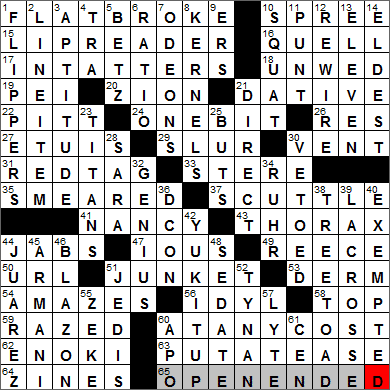 19. Architect awarded a Presidential Medal of Freedom in 1993 PEI
I. M. Pei (full name: Ieoh Ming Pei) is an exceptional American architect, born in China. Of Pei’s many wonderful works, my favorite is the renovation of the Louvre in Paris, especially the Glass Pyramid in the courtyard.

To me, the most spectacular feature of Zion National Park, in southwestern Utah, is the magnificent Zion Canyon. The canyon cuts through red Navajo sandstone and is a truly beautiful sight.

21. Latin case DATIVE
The dative case of a noun in Latin is usually spelled differently than other cases. But, the dative case does exist in English too …

As we recall from English class, a noun is in the dative case when it refers to an object that is given “to” someone.

22. The Panthers of the Big East PITT
The University of Pittsburgh (Pitt) chose its nickname for its sporting teams in 1909, and claims that it was the first team in the country to adopt the name “Panthers”.

27. Holders of notions ETUIS
“Nations” are miscellaneous items, especially the likes of needles, buttons and thread.

33. Cubic measure STERE
“Stere” is a metric measure, although it is not part of the modern metric system. Nowadays the stere is used as a measure for firewood, and is equal to one cubic meter.

41. Drew in books NANCY
The “Nancy Drew” mystery stories were produced by the Stratemeyer Syndicate. The founder of the Syndicate hired a team of writers to produce the “Nancy Drew” novels, but listed the author of each book as the fictional Carolyn Keene.

43. Where the heart is THORAX
The thorax is another name for the chest, the part of the human body between the neck and the diaphragm.

49. Volleyball great Gabrielle REECE
Gabrielle Reece is quite the athlete. She was on the team that won the first ever Beach Volleyball World Championship, in 1997. She is also a great golfer, and tried hard to make it onto the LPGA circuit.

51. Trip with a per diem, perhaps JUNKET
Nowadays we use the term “junket” for a trip taken by a government official at public expense that has no public benefit. Back in the late 1500s, a junket was a basket for carrying fish. The term was then applied to a feast or banquet, perhaps adopting the notion of a picnic “basket”. From feast or banquet, the term came to mean a pleasure trip, and is now our political junket.

56. Marlowe’s “The Passionate Shepherd to His Love,” e.g. IDYL
An idyl is a short poem with a pastoral theme, usually depicting the scene in romantic and idealized terms. The word comes from the Greek “eidyllion”, which literally translates to “little picture” but was a word describing a short, poem with a rustic theme.

Christopher Marlowe was an English dramatist and poet around in the Elizabethan era. Marlowe was born in the same year as William Shakespeare, and it seems that Shakespeare was heavily influenced by Marlowe’s work. Marlowe achieved success and prominence at a relatively young age. It was only after Marlowe’s early death (at 29 years of age) that Shakespeare became extremely successful. There is one theory, now considered somewhat outlandish, that Marlowe faked his death and continued to work under the name “William Shakespeare”.

Down
5. Carl who played Donna Reed’s TV husband BETZ
Carl Betz was an actor from Pittsburgh who is best remembered for playing Dr. Alex Stone, Donna Reed’s husband on “The Donna Reed Show” in the fifties and sixties.

7. Classic theaters ODEONS
In Ancient Greece an odeon (also odeum) was like a small theater, with “odeon” literally meaning a “building for musical competition”. Odea were used in both Greece and Rome for entertainments such as musical shows and poetry readings.

23. Cronus and Hyperion TITANS
The Titans were a group of twelve older deities in Greek mythology. In the celebrated Battle of the Titans, they were overthrown by the Olympians, who were twelve younger gods.

28. Actress Gilbert of “The Big Bang Theory” SARA
The actress Sara Gilbert really grew up playing Darlene on the sitcom “Roseanne” from 1988 to 1997. Today Gilbert appears fairly often on another hit sitcom, “The Big Bang Theory”. You can also see her on the daytime talk show called “The Talk”, a show that she actually created.

30. Shot down VETOED
“Veto” comes directly from Latin and means “I forbid”. The word was used by tribunes of Ancient Rome to indicate that they opposed measures passed by the Senate.

34. One of Duisburg’s rivers RUHR
The Ruhr is a medium-sized river in Germany that flows from east to west, ultimately emptying into the Rhine.

Duisburg is a city in the west of Germany that sits at the confluence of the Rhine and Ruhr rivers. Duisburg is home to the biggest inland harbor in the world.

44. Eponymous 1850s-’70s Mexican president JUAREZ
Benito Juárez served five times as President of Mexico, taking office for the first time in 1858, and leaving office for the last time in 1872. A number of locations across the country, and beyond, have been named in his honor, including the city of Ciudad Juárez that sits just across the US-Mexico border from El Paso.

45. Snazzy suit ARMANI
Giorgio Armani is an Italian fashion designer and founder of the company that has used his name since 1975. Although Armani is famous for his menswear, the company makes everything from jewelry to perfume.

46. Embellish showily BLAZON
Our terms “blazon” and “emblazon” both mean to decorate in a showy way. “To blazon” can also mean to adorn with a coat of arms. In the world of heraldry, a “blazon” is in fact a coat of arms, probably coming from the old French word “blason” meaning “shield”.

52. English critic Kenneth TYNAN
Kenneth Tynan was a theater critic in England who was noted for his opposition to censorship. He was the first person on British television to use the “f word”. He also created the theatrical revue “Oh! Calcutta!” that dealt with many sex-related topics and featured lots of nudity.

55. The Cowardly Lion, back in Kansas ZEKE
Zeke was the farmworker played by Bert Lahr in 1939’s “The Wizard of Oz”. Zeke is the character who morphed into the Cowardly Lion in Dorothy’s dream.

57. Suffix with electro- -LYTE
Electrolytes are typically salts, chemical compounds that ionize when dissolved in a suitable solution.

For the sake of completion, here is a full listing of all the answers:
Across
1. Busted FLAT BROKE
10. Jag SPREE
15. One who may confuse cees and zees LIP READER
16. Extinguish QUELL
17. Torn to bits IN TATTERS
18. Non-union? UNWED
19. Architect awarded a Presidential Medal of Freedom in 1993 PEI
20. Angels Landing’s national park ZION
21. Latin case DATIVE
22. The Panthers of the Big East PITT
24. At all ONE BIT
26. Apt., e.g. RES
27. Holders of notions ETUIS
29. Slight SLUR
30. Provide an outlet for VENT
31. Sale indicator RED TAG
33. Cubic measure STERE
35. Dragged through the mud SMEARED
37. Send to the bottom SCUTTLE
41. Drew in books NANCY
43. Where the heart is THORAX
44. Quick hits JABS
47. Markers IOUS
49. Volleyball great Gabrielle REECE
50. Surfer’s destination URL
51. Trip with a per diem, perhaps JUNKET
53. Suffix for some lotions -DERM
54. Floors AMAZES
56. Marlowe’s “The Passionate Shepherd to His Love,” e.g. IDYL
58. Better TOP
59. Brought down RAZED
60. Whatever it takes AT ANY COST
62. Small-capped mushroom ENOKI
63. Reassure PUT AT EASE
64. Quick reads? ZINES
65. Like some questions OPEN-ENDED