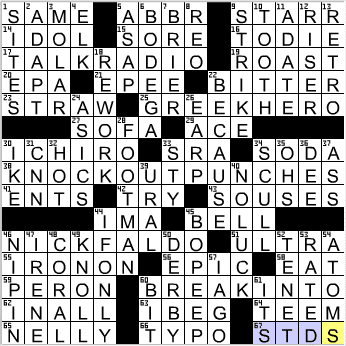 CROSSWORD SETTER: Billie Truitt
THEME: KOs … today’s themed answers are each made up of two words ending in “KO”, the first word ending in K, and the second word ending in O:

17A. Genre with listener participation : TALK RADIO
25A. Homeric protagonist : GREEK HERO
46A. Three-time Masters winner : NICK FALDO
60A. Enter forcibly, as a home : BREAK INTO

9. Ringo of the Fab Four : STARR
Ringo Starr’s real name is Richard Starkey. Before he joined the Beatles (replacing drummer Pete Best), Starkey played with the Raving Texans. It was with the Raving Texans that he adopted the name “Ringo Starr”, because he wore a lot of rings and he thought it sounded “cowboyish”. Back then his drum solos were billed as “Starr Time”.

20. Clean air org. : EPA
The Environmental Protection Agency (EPA) was set up during the Nixon administration and began operation at the end of 1970.

21. Olympics sword : EPEE
The French word for sword is “épée”. In competitive fencing the épée is connected to a system that records an electrical signal when legal contact is made on an opponent’s body.

25. Homeric protagonist : GREEK HERO
Homer was a famous poet of Ancient Greece, believed to be the author of the two classic epic poems, the “Iliad” and the “Odyssey”. However, some scholars believe that Homer did not actually exist, but rather he is the personification of oral tradition that was passed down through the ages.

30. Outfielder Suzuki : ICHIRO
Ichiro Suzuki plays baseball for the New York Yankees. Suzuki holds quite a few batting records including the single-season record for base hits (262). Ichiro Suzuki is a huge celebrity in his native-Japan. His agent says that if you address fan mail to “Ichiro Suzuki, Japan”, he’ll get your letter …

43. Boozehounds : SOUSES
The word “souse” dates back to the 14th century and means “to pickle, steep in vinegar”. In the early 1600s the usage was applied to someone “pickled” in booze, a drunkard.

The Monkees pop group was assembled in 1966 specifically for a planned television series called “The Monkees”. The show aired from 1966 to 1968, and the band continued to perform in concerts until 1970. 20 years after the band was formed, there was a revival in interest for both the show and the band’s music, so the Monkees got together for several reunion tours. The lead singer of the group was Englishman Davy Jones, who passed away in February 2012.

46. Three-time Masters winner : NICK FALDO
Nick Faldo is an English golfer, a winner of six major tournaments and a former World No. 1. For some years now Faldo has been the lead golf analyst for CBS Sports. In 2009 he was knighted by Queen Elizabeth II, so if you’re chatting with him, don’t forget to address him as Sir Nick …

59. Eva of Argentina : PERON
Nowadays, President Juan Perón of Argentina is perhaps less well-known than his second wife, Eva Perón of “Evita” fame. Juan and Eva Perón were overthrown in a military coup in 1955, although Juan Perón was returned to power in 1973 when he served for only nine months before he passed away. Juan was succeeded in office by his third wife, Isabel Perón.

65. Singer Furtado : NELLY
Nelly Furtado is a singer from Victoria, British Columbia who was born to Portuguese parents from the Azores.

Down
3. Place for a dental crown : MOLAR
The molars are grinding teeth. The term “molar” comes from the Latin “mola” meaning “millstone”.

4. Broad-antlered deer : ELK
The elk (also known as the wapiti) is the one of the largest species of deer in the world, with only the moose being bigger. Early European settlers were familiar with the smaller red deer back in their homelands, so when they saw the “huge” wapiti they assumed it was a moose, and incorrectly gave it the European name for a moose, namely “elk”. The more correct name for the beast is “wapiti”, which means “white rump” in Shawnee. It’s all very confusing …

6. Latino corner store : BODEGA
“Bodega” is the Spanish term for a winery, or these days for a grocery store.

8. Vintage touring car : REO
The REO Motor Company was founded by Ransom E. Olds (hence the name REO). The company made cars, trucks and buses, and was in business from 1905 to 1975 in Lansing, Michigan. Among the company’s most famous models were the REO Royale and the REO Flying Cloud.

12. Choir platform : RISER
A riser is a platform that elevates a group of people above a crowd, so is ideal for the performance of a choir.

24. Sneaker brand : ASICS
ASICS is a Japanese company that produces athletic gear, including running shoes. The name is an acronym, standing for the Latin phrase “anima sana in corpore sano” which translates to “a healthy soul in a healthy body”.

26. Lawman Wyatt : EARP
Wyatt Earp is famous as one of the participants in the gunfight at the O.K. Corral. Earp was a city policeman in Wichita, Kansas and also in Dodge City, Kansas. Earp was also deputy sheriff in Tombstone, Arizona where the O.K. Corral gunfight took place. Years later, Earp joined the Alaska Gold Rush and with a partner built and operated the Dexter Saloon in Nome.

30. Prez after Harry : IKE
When the future president was growing up, the Eisenhower family used the nickname “Ike” for all seven boys in the family, as “Ike” was seen as an abbreviation for the family name. “Big Ike” was Edgar, the second oldest boy. “Little/Young Ike” was Dwight, who was the third son born. Dwight had no sisters.

31. MSNBC rival : CNN
CNN (Cable News Network) was launched in 1980, and was the first television channel in the world to provide news coverage 24 hours a day.

MSNBC was founded in 1996 as a partnership between Microsoft (“MS”) and General Electric’s “NBC” broadcasting operation. Microsoft only owns a minority share in MSNBC today, but is still an equal partner in the separate company that runs msnbc.com.

34. Racing shell : SCULL
A scull is a boat used for competitive rowing. The main hull of the boat is often referred to as a shell. Crew members who row the boat can be referred to as “oars”.

39. __ Mountains: Eurasian border range : URAL
The eastern side of the Ural Mountains in Russia is generally regarded as the natural divide between the continents of Europe and Asia.

45. She lost her sheep : BO PEEP
The lines that are most commonly quoted for the rhyme about “Little Bo Peep” are:

Little Bo-Peep has lost her sheep,
And can’t tell where to find them;
Leave them alone, And they’ll come home,
Wagging their tails behind them.But, there are actually four more verses, including this one:
It happened one day, as Bo-peep did stray
Into a meadow hard by,
There she espied their tails side by side,
All hung on a tree to dry.

47. Goodnight girl of song : IRENE
“Goodnight, Irene”, also known as “Irene, Goodnight”, is a lovely American folk song that was first recorded commercially back in 1932 by blues singer Lead Belly. The song made it to number one in the charts for the Weavers in 1950 and for Frank Sinatra in the same year.

48. Snorkeler’s vista : CORAL
Corals are invertebrates found in the sea that live in compact colonies. Some corals secrete calcium carbonate to form a hard exoskeleton, and these type of corals make up the basic infrastructure of coral reefs.

50. Churchill Downs event : DERBY
The first Kentucky Derby was run in 1875, and is a race modelled on the Epsom Derby in England and the Grand Prix de Paris (now called the “Prix de l‘Arc de Triomphe”). As such, The Kentucky Derby was run over 1½ miles, although in 1896 this was shortened to 1¼ miles. The race is run annually at Churchill Downs, and the winning horse is presented with a very elaborate blanket made of red roses.

52. Basis of a creed : TENET
A tenet is an article of faith, something that is held to be true. “Tenet” is Latin for “he holds”.

A creed is a confession of faith, or a system of belief or principles. The word “creed” comes from the Latin “credo”, meaning “I believe”.

57. Othello’s confidant : IAGO
Iago is the schemer in Shakespeare’s “Othello”. Iago is a soldier who fought alongside Othello and feels hard done by, missing out on promotion. He hatches a plot designed to discredit his rival Cassio by insinuating that Cassio is having an affair with Desdemona, Othello’s wife. By the end of the play it’s Iago himself who is discredited and Othello (before committing suicide) apologizes to Cassio for having believed Iago’s lies. Heavy stuff …