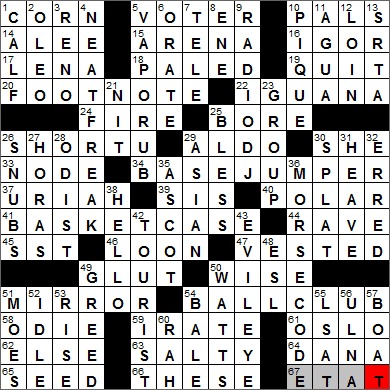 CROSSWORD SETTER: Patti Varol
THEME: Ball Club … today’s themed answers all start with a word that is a type of BALL:

20A. *Page-bottom reference indicated by an asterisk FOOTNOTE (giving “football”)
34A. *Skydiver using low-altitude starting points BASE JUMPER (giving “baseball”)
41A. *Nervous wreck BASKET CASE (giving “basketball”)
54A. Angels or Dodgers, and, in a way, what the first words of the answers to starred clues comprise BALL CLUB

Today’s Wiki-est, Amazonian Googlies
Across
14. Toward shelter, at sea ALEE
“Alee” is the direction away from the wind. If a sailor points into the wind, he or she is pointing “aweather”.

16. Dr. Frankenstein’s helper IGOR
Igor has been the assistant to Dracula, Frankenstein and Young Frankenstein among others. Igor is almost invariably portrayed as a hunchback.

Mary Shelley’s Gothic novel has the full title of “Frankenstein; or, The Modern Prometheus”. The subtitle underscores one of the theme’s of the book, a warning about man’s expansion into the Industrial Revolution.

17. Musical Horne LENA
Lena Horne was an American jazz singer, actress, dancer and civil rights activist. Horne started out her career as a nightclub singer and then began to get some meaty acting roles in Hollywood. However, she ended up on the blacklist during the McCarthy Era for expressing left wing political views. One of Horne’s starring roles was in the 1943 movie “Stormy Weather” for which she also performed the title song.

22. Exotic lizard IGUANA
An iguana is a lizard, and as such is cold-blooded. There are times when pet iguanas need heat from an IR lamp to maintain body temperature.

24. St. Elmo’s __ FIRE
St. Elmo is the patron saint of sailors. He lends his name to the electrostatic weather phenomenon (often seen at sea) known as St. Elmo’s fire. The “fire” is actually a plasma discharge caused by air ionizing at the end of a pointed object (like the mast of a ship), something often observed during electrical storms.

29. Designer Gucci ALDO
Gucci was founded in Rome in 1921, by Guccio Gucci. Gruccio’s son Aldo took over the company after his father’s death in 1953. It was Aldo who established the international presence for the brand and opened the company’s first overseas store, in New York City.

34. *Skydiver using low-altitude starting points BASE JUMPER (giving “baseball”)
Base jumping is parachuting off fixed objects such as buildings or cliffs. The term “base” is actually an acronym for the four types of objects from which parachutists jump: Buildings, Antennas. Spans/bridges, Earth/cliffs.

37. Dickens’s Heep URIAH
Uriah Heep is a sniveling insincere character in the novel “David Copperfield” by Charles Dickens. The character is such a “yes man” that today, if we know someone who behaves the same way, then we might call that person a “Uriah Heep”.

45. Concorde, e.g., for short SST
The most famous supersonic transport (SST) is the retired Concorde. Concorde was developed and produced under an Anglo-French treaty by France’s Aérospatiale and the UK’s British Aircraft Corporation (BAC).

46. Crazy as a __ LOON
The slang term “loon” for a deranged person probably comes from the loud cry of the bird called the loon, but it is also influenced by the word “lunatic”.

47. Like a three-piece suit VESTED
Here’s another word that often catches me out. What we call a vest in the US is a waistcoat back in Ireland. And the Irish use the word “vest” for an undershirt.

50. Like the Magi WISE
“Magi” is the plural of the Latin word “magus”, a term applied to someone who was able to read the stars. Hence, magi is commonly used with reference to the “wise men from the East” who followed the star and visited Jesus soon after he was born.

51. “On the wall” beauty judge in a film classic MIRROR
In the German fairy tale “Snow White” (and the Disney film), the wicked queen owns a magic mirror, which she asks every morning:

Magic mirror in my hand, who is the fairest in the land?

Walt Disney changed the words slightly for his movie version of the tale:

Mirror, mirror on the wall, who’s the fairest of them all?

54. Angels or Dodgers, and, in a way, what the first words of the answers to starred clues comprise BALL CLUB
The Anaheim Angels are today more correctly called the Los Angeles Angels of Anaheim. The “Angels” name dates back to 1961 when the team was founded in the “City of Angels”, Los Angeles. When the franchise moved to Anaheim in 1965 they were known as the California Angels, then the Anaheim Angels, and most recently the Los Angeles Angels at Anaheim.

The Los Angeles Dodgers baseball team of course were known as the Brooklyn Dodgers before the franchise moved to California. Before being known as the Dodgers, the team was known in Brooklyn as the Robins, the Superbas, the Trolley Dodgers, the Bridegrooms/Grooms, the Grays and the Atlantics.

58. Garfield’s pal ODIE
Odie is Garfield’s best friend and is a slobbery beagle, a character in Jim Davis’s comic strip.

61. Norway’s capital OSLO
Oslo, the capital of Norway, is an ancient city that was founded around 1048. The medieval city was destroyed by fire in 1624 and was rebuilt by the Danish-Norwegian king Christian IV and renamed to Christiana. In 1877 there was an official change of the spelling of the city’s name to “Kristiana”, and then more recently in 1925 the name was restored to the original Oslo. Things have almost gone full circle and now the center of Oslo, the area that would have been contained by the original medieval walls, has apparently been renamed to Christiana.

64. Funnyman Carvey DANA
Dana Carvey, along with the likes of Phil Hartman and Kevin Nealon, was part of the new breed of “Saturday Night Live” comedians credited with resurrecting the show in the late eighties. One of Carvey’s most popular characters was the Church Lady, and he became so associated with her that among fellow cast members Carvey was often referred to simply as “the Lady”. Carvey had open-heart surgery in 1997 to clear a blocked artery, but the surgical team operated on the wrong blood vessel. To recover, he had to have five more procedures. He ended up suing for medical malpractice and donated his $7.5 million compensation payment to charity.

66. “__ are the times that …”: Paine THESE
Thomas Paine’s famous series of pamphlets called “The American Crisis” starts with the words:

67. State, in France ETAT
In French, a state (état) is a political division (division politique).

Down
2. Topping in a tub OLEO
Emperor Louis Napoleon III of France announced a competition to develop a substitute for butter, a substitute that would be more accessible to the lower classes and more practical for the armed forces. In 1869, a French chemist called Hippolyte Mege-Mouries came up with something that he called oleomargarine, which was eventually manufactured under the trade name “margarine”. The name “oleomargarine” also gives us our generic term “oleo”.

3. Nevada gambling city RENO
Reno, Nevada was named in honor of Major General Jesse Lee Reno, a Union officer killed in the Civil War. The city has a famous “Reno Arch”, a structure that stands over the main street. The arch was erected in 1926 to promote an exposition planned for the following year. After the expo, the city council decided to keep the arch and held a competition to decide what wording should be displayed, and the winner was “The Biggest Little City in the World”.

9. One supplying drive-time music, briefly RADIO DJ
The world’s first radio disk jockey (DJ) was one Ray Newby of Stockton, California who made his debut broadcast in 1909, would you believe? When he was 16 years old and a student, Newby started to play his records on a primitive radio located in the Herrold College of Engineering and Wireless in San Jose. The records played back then were mostly recordings of Enrico Caruso.

10. Stimulate, as curiosity PIQUE
The words “whet” and “pique” can both be used in the sense of sharpening or awaking one’s interest or desire.

12. Choice cut LOIN
Loin is the tissue along the top of the ribs.

13. Mlle., in Mexico SRTA
Señorita (Srta.) is Spanish and mademoiselle (Mlle.) is French for “Miss”.

27. Jewish wedding dances HORAS
The hora (also “horah”) is a circle dance that originated in the Balkans. The hora was brought to Israel by Romanian settlers, and is often performed to traditional Israeli folk songs. The dance is a regular sight at Jewish weddings.

29. Made in Taiwan, say ASIAN
Prior to 1945, the island that we know today as Taiwan was called “Formosa”, the Portuguese word for “beautiful”. Portuguese sailors gave the island this name when they spotted it in 1544. The official name for the state of Taiwan is the “Republic of China”.

35. Knotted neckwear ASCOT
An Ascot tie is that horrible-looking (I think!) wide tie that narrows at the neck, which these days is only really worn at weddings. The tie takes its name from the Royal Ascot horse race at which punters still turn up in formal wear at Ascot Racecourse in England.

36. System with dots and dashes MORSE CODE
Samuel Morse was a very accomplished and reputable painter (he was engaged to paint a portrait of President John Adams, for example). In 1825 Morse was in Washington working on a commissioned painting when he received a one-line letter by horse messenger telling him that his wife was ill. He left immediately for his home in New Haven, Connecticut but by the time that Morse arrived his wife had already died and had been buried. This single event spurred him to move from painting to the development of a rapid means of long distance communication, leading to the single-wire telegraph and Morse code.

38. “You had me at __”: “Jerry Maguire” line HELLO
“Jerry Maguire” is a 1996 film starring Tom Cruise, Cuba Gooding, Jr. and Renée Zellweger. The title character is played by Cruise, and is a sports agent. There are several liines oft quoted from “Jerry Maguire” including:

48. Immigrant’s subj. ESL
English as a Second Language (ESL) is sometimes referred to as English for Speakers of Other Languages (ESOL) and English as a Foreign Language (EFL).

50. Light bulb units WATTS
James Watt was a Scottish inventor, a man who figured prominently in the Industrial Revolution in Britain largely due to the improvements he made to the fledgling steam engine. The SI unit of power is called the watt, named in his honor.

51. “The Simpsons” tavern MOE’S
Moe Szyslak is the surly bartender and owner of Moe’s Tavern in “The Simpsons” animated TV show. I don’t really care for “The Simpsons”, but Hank Azaria who supplies the voice for the Moe character … him I like …