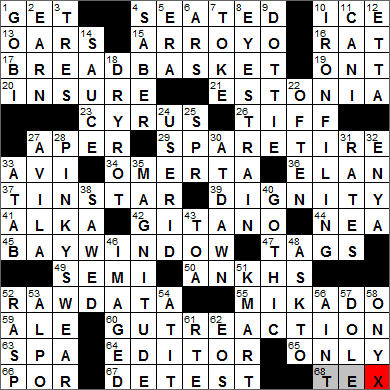 CROSSWORD SETTER: Steve Blais
THEME: Big Belly … each of today’s themed answers is a slang term for an oversized belly, a GUT REACTION, in a way:

17A. What baguettes may be served in BREAD BASKET
29A. Fifth wheel SPARE TIRE
45A. Cozy place to read a book BAY WINDOW

Today’s Wiki-est, Amazonian Googlies
Across
13. Dinghy gear OARS
Our word “dinghy” comes from the Hindi “dingi”, the word for a small boat.

15. Water-carved gulch ARROYO
An arroyo is a small stream, or more often, a dry riverbed.

17. What baguettes may be served in BREAD BASKET
“Baguette” is the French word for “wand, baton” as in “baguette magique” (magic wand).

21. Baltic Sea republic ESTONIA
Estonia is one of the former Soviet Socialist Republics and is located in Northern Europe on the Baltic Sea, due south of Finland. Estonia has been overrun and ruled by various empires over the centuries. The country did enjoy a few years of freedom at the beginning of the 20th century after a war of independence against the Russian Empire. However, Estonia was occupied again during WWII, first by the Russians and then by the Germans, and then reoccupied by the Soviets in 1944. Estonia has flourished as an independent country again since the collapse of the USSR in 1991.

23. “Hannah Montana” star Miley CYRUS
Miley Cyrus became famous playing the Disney Channel character “Hannah Montana”. Miley is of course the daughter of country singer Billy Ray Cyrus. When she was born, Billy Ray and his wife named their daughter “Destiny Hope”, but soon they themselves calling her “Smiley” as she was always smiling as a baby, and this got shortened to Miley over time. Cute …

33. Bird: Prefix AVI-
The prefix “avi-” means “bird-related” as in “aviculture”, the breeding of birds.

34. Mobster’s code of honor OMERTA
Omertà is a code of honor in southern Italian society. The term has been adopted by the Mafia to mean a code of silence designed to prevent a Mafioso from becoming an informer. For example, the famous Joe Valachi was someone who broke the code of silence in 1963, informing on the New York Mafia. Valachi’s story was told in the movie “The Valachi Papers”, with Charles Bronson playing the lead.

36. Dashing style ELAN
Our word “élan” was imported from French, in which language the word has a similar meaning to ours i.e “style” or “flair”.

42. Jeans giant of the ’80s GITANO
Gitano is a brand of jeans sold by Kmart.

44. Grant-giving gp. NEA
The National Endowment for the Arts (NEA) is an agency funded by the federal government that offers support and financing for artistic projects. The NEA was created by an Act of Congress in 1965. Between 1965 and 2008, the NEA awarded over $4 billion to the arts, with Congress authorizing around $170 million annually through the eighties and much of the nineties. That funding was cut to less than $100 million in the late nineties due to pressure from conservatives concerned about the use of funds, but it is now back over the $150 million mark. I wonder how long that will last though …

50. Egyptian life symbols ANKHS
The ankh was the ancient Egyptian hieroglyphic character for “eternal life”. The ankh wasn’t just used in inscriptions but was often fashioned into amulets and as surrounds for mirrors (perhaps symbolizing a view into another world).

68. Cowboy singer Ritter TEX
Tex Ritter was a country singer and actor from Murvaul, Texas. On the big screen, Ritter was known as a “singing cowboy”, and appeared in around 40 westerns in which he belted out a tune or two. Tex’s son was actor John Ritter, who played Jack Tripper so well in the sitcom “Three’s Company”.

Down
1. Mongolian desert GOBI
The large desert in Asia called the Gobi lies in northern China and southern Mongolia. The Gobi desert is growing at an alarming rate, particularly towards the south. This “desertification” is caused by increased human activity. The Chinese government is trying to halt the desert’s progress by planting great swaths of new forest, the so called “Green Wall of China”.

3. Very, in Vichy TRES
Vichy is a spa town in the center of France. The people from Vichy are known as Vichyssois. After Paris, was occupied by the Germans in WWII, Vichy was chosen as the seat of government for what was called the French State. The Vichy government had theoretical authority even in occupied France, and is remembered for its collaboration with the German authorities. Vichy was chosen as the new seat of government because of its relative proximity to Paris, and simply because the town had the largest hotel room capacity in the “free zone” of the country.

7. Casino gratuity TOKE
“Toke” is an informal term for a tip given to a dealer or other employee at a casino.

12. Jazzy James ETTA
Etta James was best known for her beautiful rendition of the song “At Last”. Sadly, as she disclosed in her autobiography, James lived a life that was ravaged by drug addiction leading to numerous legal and health problems. Ms. James passed away in January 2012 having suffered from leukemia.

14. Alfredo, for one SAUCE
Alfredo sauce is usually associated with the Italian dish called fettuccine Alfredo. The sauce is made from Parmesan cheese and butter, and is named for the Italian restaurant owner Alfredo Di Lelio. Di Lelio’s nephews still own and run a restaurant in Rome called “Il Vero Alfredo”. Here in the US, we often add other ingredients to the basic cheese and butter recipe. And the name “fettuccine Alfredo” is unknown in Italy today.

27. Walled city of Spain AVILA
Avila is famous for the walled defenses around the old city, which date back to 1090. They were constructed out of brown granite, and are still in excellent repair. There are nine gateways and eighty-towers in all. Even the cathedral built between the 12th and 14th centuries is part of the city’s defenses, so it looks like a imposing fortress.

28. Kids’ digital deal-sealer PINKY SWEAR
The use of “pinkie” comes into English from “pinkje”, the Dutch word for the little finger. Who knew?

32. One-named Irish singer ENYA
Enya’s real name is Eithne Patricia Ní Bhraonáin, which can translate from Irish into Enya Brennan. Her Donegal family (in the northwest of Ireland) formed a band called Clannad, which included Enya. In 1980 Enya launched her very successful solo career. She sure does turn up a lot in crosswords!

51. Target competitor KMART
Kmart is the third largest discount store chain in the world, behind Wal-Mart and Target. Kmart is famous for its promotions known as “blue light specials”, a program first introduced in 1965 and discontinued in 1991. I remember being in a Kmart store soon after coming to live in the US. That evening an employee installed a light stand an aisle away from me, switched on a flashing blue light and there was some unintelligible announcement over the loudspeaker system. I had no idea what was going on …

53. Brand for a pooch ALPO
Alpo is a brand of dog food first produced by Allen Products in 1936, with “Alpo” being an abbreviation for “Allen Products”. Lorne Greene used to push Alpo in television spots, as did Ed McMahon and Garfield the Cat, would you believe?

56. “__ She Sweet” AIN’T
“Ain’t She Sweet” is a popular song first published in 1927, composed by Milton Ager and Jack Yellen. Ager wrote the song for his daughter, Shana. Shana grew up to become Shana Alexander, a political commentator on CBS’s “60 Minutes”.

58. Jet-black gem ONYX
Onyx is a form of quartz that comes in many different shades, but most often it’s the black version that’s used for jewelry. The name “onyx” comes from the Greek word for “fingernail”, as onyx in the flesh color is said to resemble a fingernail.

61. GPS suggestion RTE
GPS stands for Global Positioning System. The modern GPS system that we use today was built by the US military who received the massive funding needed because of fears during the Cold War of the use of Intercontinental Ballistic Missiles. We civilians all round the world owe a lot to President Ronald Reagan because he directed the military to make GPS technology available to the public for the common good. President Reagan was moved to do so after the Soviet Union shot down KAL flight 007 carrying 269 people, just because the plane strayed accidentally into Soviet airspace.

62. Camera named for a goddess EOS
I’ve been using Canon EOS cameras for decades now, and have nothing but good things to say about the cameras and the lenses. The EOS name stands for Electro-Optical System, and was chosen because it evokes the name of Eos, the Titan goddess of dawn from Greek mythology.