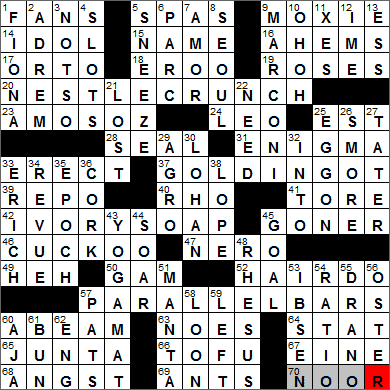 CROSSWORD SETTER: Susan Gelfand
THEME: Parallel Bars … each of today’s themed answers is a BAR, and as each lies in the across direction, they are all PARALLEL BARS:

Today’s Wiki-est, Amazonian Googlies
Across
5. Pampering places SPAS
The word “spa” migrated into English from Belgium, as Spa is the name of a municipality in the east of the country that is famous for its healing hot springs. The name “Spa” comes from the Walloon word “espa” meaning “spring, fountain”.

9. Spunk MOXIE
Back as far as 1876, Moxie was a brand name of a “medicine” peddled with the claim that it “built up your nerve”. In 1924, Moxie was registered as a trademark for a bitter, non-alcoholic beverage (no more claims of nerve-building). And we’ve used the term “moxie” to mean “nerve” ever since …

23. “Jews and Words” co-author AMOS OZ
Amos Oz is an Israeli writer. Oz has written 18 books in Hebrew and his works have been translated into 30 languages, including Arabic.

42. “It floats” sloganeer IVORY SOAP
Ivory soap is one of Procter & Gambles oldest products, introduced way back in 1879. Ivory soap is noted for its “purity” and also because of its property of floating in water. Despite urban myths to the contrary, the property of floating in water was developed deliberately by a chemist at the time Ivory was being formulated. The soap floats because the ingredients are mixed longer than necessary for homogenization, which introduces more air into the product.

47. Pianist Peter NERO
Peter Nero is a pianist and conductor of “pops” orchestral concerts. Nero had a huge hit in the pop music charts in 1971 with the theme tune from the movie “Summer of ’42”.

50. Looker’s leg GAM
The American slang term “gams” is used for a woman’s legs, but the term goes back to the 18th century “gamb” meaning the leg of an animal on a coat of arms.

52. Beehive, e.g. HAIRDO
That distinctive “beehive” hairstyle is also called a B-52, because the round beehive-shape also resembles the bulbous nose of a B-52 bomber! The style originated in 1958 and is credited to Margaret Vinci Heldt, the owner of a hair salon in downtown Chicago. I’m not a fan of the beehive, but I do have to say that Audrey Hepburn carried it off in “Breakfast at Tiffany’s”, as did Dusty Springfield in her heyday.

60. Crosswise, nautically ABEAM
The beam is the widest part of a nautical vessel. Something pointed out as lying “abeam” is something that it is 90 degrees from a line through the bow and the stern, in other words directly off to the right or the left.

65. Coup group JUNTA
A junta is a group of military officers that rule a country, usually after having seized power forcibly. “Junta” is a Spanish word meaning “council”.

66. Vegan staple TOFU
Tofu is another name for bean curd, and is a Japanese word meaning just that … bean that has “curdled”. Tofu is produced by coagulating soy milk, using either salt or something acidic. Once the protein has coagulated, the curds are pressed into the familiar blocks. Personally I love tofu, but my wife, she absolutely hates it …

70. American-born Jordanian queen NOOR
Queen Noor is the widow of King Hussein of Jordan. Queen Noor was born Lisa Halaby in Washington, D.C., the daughter of Najeeb Halaby. Her father was appointed by President Kennedy as the head of the Federal Aviation Administration, and later became the CEO of Pan Am. Lisa Halaby met King Hussein in 1977, while working on the design of Jordan’s Queen Alia Airport. The airport was named after King Hussein’s third wife who had been killed that year in a helicopter crash. Halaby and the King were married the next year, in 1978.

Down
1. Pop singer Apple FIONA
Fiona Apple is a singer-songwriter and pianist from New York City.

2. Relevant, in law AD REM
The Latin term “ad rem” translates literally as “to the matter”.

4. Casino lineup SLOTS
Slot machines earned the nickname “one-armed bandits” simply because they had “one arm”, the handle pulled to operate the machine, and they robbed you of all your money like bandits!

8. 1988 Summer Olympics city SEOUL
The largest metropolitan area in the world is centered on Tokyo, Japan. Seoul, South Korea comes in second with a population of over 20 million people.

9. Pioneer in wireless telegraphy MARCONI
Guglielmo Marconi was an inventor, famous for development of a radio telegraph design that was used across the world. Marconi did a lot of his early radio work in his native Italy, but moved to England as the British government was very interested in supporting his developments.

12. “__ Mine”: Beatles song I ME
“I Me Mine” is one of the relatively few Beatles songs to have been written by George Harrison (and indeed performed by him). Harrison chose the same title for his autobiography, published in 1980 just a few weeks before John Lennon was assassinated in New York City.

21. 2000s TV drama that ended in a church LOST
“Lost” is a television drama that ran for six seasons, finishing up in 2010. The show followed the adventures of survivors of a plane crash who get stranded on what seem to be a deserted tropical island. Things then get a bit weird, I hear. I didn’t watch “Lost”, but it seems to be one of those shows that folks really love or really hate …

26. Camper’s dessert S’MORE
S’mores are a treat peculiar to North America, usually eaten around a campfire. A s’more consists of a roasted marshmallow and a layer of chocolate sandwiched between two graham crackers. The earliest written reference to the recipe is in a 1927 publication called “Tramping and Trailing with the Girl Scouts”. Girl Scouts always did corner the market on cookies and the like!

27. Spud TATER
The word “spud” is used as a slang term for a potato and was first recorded in the mid-1800s, in New Zealand would you believe?

30. Lindsay of “Mean Girls” LOHAN
I think that actress Lindsay Lohan’s big break was in the Disney remake of “The Parent Trap” in 1998. I’ve really only enjoyed one of Lohan’s films though, “Freaky Friday” from 2003 in which she stars alongside the fabulous Jamie Lee Curtis.

“Mean Girls” is a teen comedy movie released in 2004 starring Lindsay Lohan. Tina Fey also puts in a an appearance, which isn’t surprising as she wrote the screenplay.

32. Gung-ho about INTO
“Kung ho” is a Chinese expression meaning “work together, cooperate”. The anglicized version “gung ho” was adopted by a Major Evans Carlson as an expression of combined spirit for his 2nd Marine Raider Battalion during WWII. From there the term spread throughout the Marine Corps and back to America where it persists to this day.

33. Psychoanalyst Fromm ERICH
Erich Fromm was a German psychologist. Fromm studied extensively the work of Sigmund Freud, and became very critical of his theories. He was also noted for his political views, and had a socialist leaning. He spent some time in the US and was active in the Socialist Party of America, in the fifties when McCarthyism was running rampant.

34. Variety show REVUE
“Revue” is the French word for “review” …

43. Place for meditation, for some YOGA MAT
In the West we tend to think of yoga as a physical discipline, a means of exercise that uses specific poses to stretch and strengthen muscles. While it is true that the ancient Indian practice of yoga does involve such physical discipline, the corporeal aspect of the practice plays a relatively small part in the whole philosophy. Other major components are meditation, ethical behavior, breathing and contemplation.

48. Animal for which a blood factor is named RHESUS
The Rhesus macaque is also known as the Rhesus monkey. As it is widely available and is close to humans anatomically and physically, the Rhesus macaque has been used in scientific research for decades. The Rhesus monkey was used in the development of rabies, smallpox and polio vaccines, and it also gave its name to the Rhesus factor that is used in blood-typing. It was also Rhesus monkeys that were launched into space by the US and Soviet space programs. Humans and macaques share about 93% of their DNA and had a common ancestor about 25 million years ago.

51. Tropical ray MANTA
The manta ray is the biggest species of ray, with the largest one recorded at over 25 feet across and weighing 5,100 pounds.

53. Hedda Gabler’s creator IBSEN
“Hedda Gabler” is a play by the great Norwegian playwright Henrik Ibsen, first published in 1890. Considered one of the greatest theater roles, the title character of Hedda Gabler is sometimes referred to as “the female Hamlet”.

55. Backup-beating brand DRANO
To clean out drains we might buy Crystal Drano which is sodium hydroxide (lye) mixed with sodium nitrate, sodium chloride (table salt) and aluminum. The contents of Drano work in concert to clear the clog. The lye reacts with any fats creating soap which may be enough to break up the clog. Also, the finely-divided aluminum reacts with water creating tremendous heat so that that mixture boils and churns, then any hair or fibers are cut by the sharp edges of the nitrate and chloride crystals. Having said all that, I find that boiling water poured down the drain almost always does the job …

56. Maker of the MyBlend blender OSTER
The Oster brand of small appliances was introduced in 1924 by John Oster. He started out by making manually-powered hair clippers designed for cutting women’s hair, and followed up with a motorized version in 1928. The clippers kept the company in business until 1946 when Oster diversified, buying a manufacturer of liquefying blenders in 1946. The blender was renamed an Osterizer, and was a big hit. Oster was bought up by Sunbeam, which has owned the brand since 1960.

58. Bird on Canada’s dollar coin LOON
The great northern loon is the provincial bird of Ontario, and the state bird of Minnesota. The loon once appeared on Canadian $20 bills and also appears on the Canadian one dollar coin, giving the coin the nickname “the Loonie”.

60. 1977 Steely Dan album AJA
Steely Dan’s heyday was in the seventies when they toured for a couple of years, although the group mainly focused on studio work. The band was formed in 1972 and broke up in 1981. The core of the band reunited in 1993 and they are still going strong today.

62. Tower of London loc. ENG
The spectacular castle called the Tower of London sits right on the north bank of the River Thames in the center of London. The Tower dates back to the years just following the Norman Conquest of England in 1066. The victorious William the Conqueror built the Tower’s central keep (called the White Tower) in 1078. The Tower of London has been used for many purposes over the centuries, as a residence, a prison, and was even home to the Royal Mint. Famously it houses the Crown Jewels of the United Kingdom, and has done so since 1303.