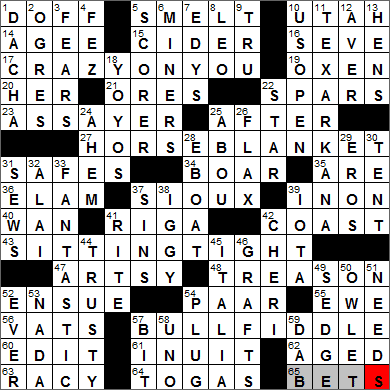 17A. 1976 debut single for Heart CRAZY ON YOU
27A. Stable warmer HORSE BLANKET

Today’s Wiki-est, Amazonian Googlies
Across
1. Take off politely, as one’s hat DOFF
One doffs one’s hat, usually as a mark of respect. To doff is to take off, with “doff” being a contraction of “do off”.

5. Small silvery fish SMELT
Smelt is the name given to several types of small fish.

10. Ogden’s state UTAH
Ogden, Utah was the first permanent settlement by people of European descent in what is now the state of Utah.

The excellent 1951 movie “The African Queen” is a screen adaptation of a novel with the same name by C. S. Forster. The stars of course were Katherine Hepburn and Humphrey Bogart, and the film won Bogie his only Oscar. Some scenes were shot on location in Uganda and the Congo, where conditions were far from ideal for making a film. Most of the cast fell ill at various times, although Bogart remained hale and hearty. He claimed that was because he stuck to his own supply of whiskey rather than drinking the local water!

16. Golfer Ballesteros SEVE
Seve Ballesteros was a very entertaining golfer from Spain, once ranked as the world’s number one player. Sadly, Ballesteros died from brain cancer in 2011, at the age of 54.

17. 1976 debut single for Heart CRAZY ON YOU
Heart is a rock band from Seattle, Washington, founded in the seventies and still going strong. The band has had a changing lineup, except for sisters Ann and Nancy Wilson.

19. Yoked bovines OXEN
A yoke is that wooden beam used between a pair of oxen so that they are forced to work together.

20. The Beatles’ “And I Love __” HER
“And I Love Her” is a lovely ballad recorded by the Beatles in 1964. It is one of my favorite Lennon/McCartney compositions …

36. Jack of old Westerns ELAM
Jack Elam was a movie actor noted for playing the bad guy in Westerns. When Elam was a boy scout, he was accidentally stabbed in the eye with a pencil. The incident left him blind in that eye, and the iris remained skewed to the outside of his face. This gave him a crazed, wide-eyed look that helped add a sense of menace to the characters Elam played.

37. Nationality of the two leaders suggested by the starts of 17-, 27-, 43- and 57-Across SIOUX
Crazy Horse’s Lakota name translates literally into English as “His Horse is Crazy or Spirited”. Crazy Horse was one of the tribal war party leaders at the Battle of Little Bighorn, also known as Custer’s Last Stand. Crazy Horse surrendered to the US Army in 1877. He was fatally stabbed while in custody, apparently trying to escape after having surrendered. The circumstances surrounding his death are still shrouded in controversy.

Sitting Bull was a Hunkpapa Lakota Native American who led his people in resisting settlement of tribal lands. Sitting Bull is most notably associated with the victory over the US Cavalry, led by Lt. Col. Custer, at the Battle of the Little Bighorn. US forces pursued Sitting Bull for five years after Little Bighorn until he surrendered in 1881. He was held as a prisoner of war for almost two years before being released onto a reservation. In 1884, he was allowed to leave the reservation and joined Buffalo Bill Cody’s Wild West Show, where he earned a tidy sum for a few months. Several years later an order was issued for his arrest due to concern that he was about to flee his reservation. Sitting Bull was shot during an altercation as he was being taken into custody.

41. Latvian capital RIGA
Riga is the capital city of Latvia. The historical center of Riga is a UNESCO World Heritage Site, declared as such because of the city’s magnificent examples of Art Nouveau architecture.

Latvia is one of the former Soviet Socialist Republics. People from Latvia are called Letts.

54. Carson’s predecessor PAAR
Jack Paar was most famous as the host of “The Tonight Show”, from 1957 to 1962. When he died in 2004, “Time” magazine wrote that Paar was “the fellow who split talk show history into two eras: Before Paar and Below Paar”. Very complimentary …

Johnny Carson hosted “The Tonight Show” for thirty years, from 1962 to 1992. Although Carson was the first choice to take over the show from Jack Paar, he initially declined. Carson eventually took the job, after it had also been declined by Bob Newhart, Jackie Gleason, Groucho Marx and Joey Bishop.

55. Mary’s little lamb, perhaps EWE
“Mary Had a Little Lamb” is a nursery rhyme that originated in the US, first published in Boston in 1830. The poem was written by Sarah Josepha Hale, and was based on a real-life Mary who had a pet lamb that followed her around. “Mary Had a Little Lamb” has the distinction of being the first words recorded by Thomas Edison on his phonograph invention in 1977.

56. Cabernet containers VATS
The Cabernet Sauvignon grape has been around since the 17th century. It is the result of a chance crossing in southwestern France of the Cabernet franc and Sauvignon blanc grapes.

57. Informal name for the double bass BULL FIDDLE
The double bass is sometimes referred to as the “doghouse bass” and “bull fiddle”.

61. Native Alaskan INUIT
The Inuit peoples live in the Arctic, in parts of the US, Russia, Greenland and Canada.

64. Garb at the Forum TOGAS
In Ancient Rome the classical attire known as a toga (plural “togae”) was usually worn over a tunic. The tunic was made from linen, and the toga itself was a piece of cloth about twenty feet long made from wool. The toga could only be worn by men, and only if those men were Roman citizens. The female equivalent of the toga was called a “stola”.

Down
1. Russian cottage DACHA
Dachas are usually second homes in Russia and the former Soviet Union that are located outside the city limits in rural areas. Residents/tenants of dachas are often called dachniks.

4. Brimless cap FEZ
“Fez” is the name given to the red cylindrical hat worn mainly in North Africa, and by Shriners here in the US. The fez used to be a very popular hat across the Ottoman Empire. The etymology of “fez” is unclear, although it might have something to do with the Moroccan city named Fez.

8. Regulus’s constellation LEO
The constellation called Leo of course can be said to resemble a lion. Others say that it resembles a bent coat hanger. I’m not sure what the Latin is for coat hanger, though …

10. Golf tournament first played in 1895 US OPEN
Golf’s US Open Championship is held on the third Sunday of every June, which happens to be Father’s Day. The first US Open was held in 1895, over 36 holes played over one day on a 9-hole course in Newport, Rhode Island.

11. Portmanteau region between Dallas and Little Rock TEXARKANA
Texarkana is the name given to the twin cities of Texarkana, Texas and Texarkana, Arkansas that sit either side of the state line between Texas and Arkansas. The name of “Texarkana” was given when the settlement was founded at the junction of two railroads in 1873. Back then, it was believed that the new city would be not only on the borders of Texas (TEX) and Arkansas (ARK) but also on the border of Louisiana (ANA), giving the city its name. The Louisiana state line was eventually set about 30 miles away, but the -ANA suffix was retained.

12. Solemnly swear AVER
The word “aver”, meaning “profess”, comes from the Latin “adverare” meaning “to make true, to prove to be true” from “ad” (to) and “verus” (true).

18. They have strings attached YO-YOS
Would you believe that the first yo-yos date back to 500 BC? There is even an ancient Greek vase painting that shows a young man playing with a yo-yo. Centuries later Filipinos were using yo-yos as hunting tools in the 1500s. “Yo-yo” is a Tagalog (Filipino) word meaning “come-come” or simply “return”.

22. Regulus, for one STAR
Regulus is the brightest star in the constellation of Leo. Regulus is a multiple star and what we see as one entity is actually made up of four stars rotating around a common center of mass. “Regulus” is Latin for “prince”.

25. Leigh Hunt’s “__ Ben Adhem” ABOU
Abou Ben Adhem, also known as Ibrahim Bin Adham, was an Arab Muslim saint. He was made famous in the western world with the publication in 1838 of the poem “Abou Ben Adhem” that was composed by the English poet James Henry Leigh Hunt.

28. WWII torpedo craft E-BOAT
In WWII, the German Navy’s Motor Torpedo Boats were similar to American PT boats and were called S-boots, short for Schnellboot (“fast craft”). The Allied forces referred to them as E-boats, with the “E” possibly standing for “enemy” or “Eilboot” (“hurry boat”).

32. Jai __ ALAI
Even though jai alai is often said to be the fastest sport in the world because of the speed of the ball, in fact golf balls usually get going at a greater clip.

38. Punk star __ Pop IGGY
Iggy Pop is a punk rock performer from Muskegon, Michigan. When he was in high school, he was a drummer for a local band called the Iguanas, and so was given the nickname “Iggy”.

39. Mite IOTA
Iota is the ninth letter in the Greek alphabet. We use the word “iota” to portray something very small as it is the smallest of all Greek letters.

A mite is a small amount, as in “the widow’s mite”, a story from the Bible.

42. Dearie, in Dijon CHERI
Dijon is a city in eastern France, in the Burgundy region. Dijon is famous for its mustard, a particularly strong variation of the condiment. The European Union doesn’t protect the name “Dijon” so anyone can use it on a label. That seems fair enough to me given that 90% of the mustard made in and around Dijon is produced using mustard seed imported from Canada!

45. Milano’s land ITALIA
In Italian, Milan (Milano) is a city in Italy (Italia).

46. Botanists’ scions GRAFTS
Scion comes from the old French word “sion” or “cion”, meaning “a shoot or a twig”. In botanical terms today, a scion is used in grafting two compatible plants together. In grafting, one plant is selected for its root system (the “rootstock”), and the other plant is selected for its stems, leaves and fruit (the “scion”). The term scion migrated naturally into the world of family history. A scion is simply a descendant, a son or a daughter and therefore a branching point in the family tree.

49. Swamp grass SEDGE
Sedges are a family of plants that resemble grasses and rushes. Sedges are more properly called Cyperaceae.

53. Zippo NADA
“Nada” is the Spanish word for “nothing”. “De nada” translates literally from the Spanish as “of nothing”, and is used to mean “you’re welcome” or “don’t mention it”. The French have the same expression “de rien”, also translating to “of nothing” and used the same way.

The use of the words “zip” and “zippo” to mean “nothing” dates back to the early 1900s when it was student slang for being graded zero on a test.