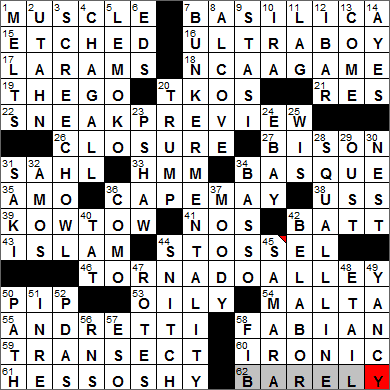 Today’s Wiki-est, Amazonian Googlies
Across
7. Catholic pilgrimage destination BASILICA
In its modern usage, the term “basilica” applies to a Roman Catholic church that has been given special ceremonial rights by the Pope.

16. Member of DC Comics’ Legion of Super-Heroes ULTRA BOY
Ultra Boy is a comic book superhero who was swallowed by an ultra-energy beast. While inside the beast, Ultra Boy was irradiated and so gained his superpowers. Ultra Boy’s real name is Jo Nah on his home planet. The name “Jo Nah” is derived from the Biblical character Jonah who was swallowed by the whale.

18. March Madness event NCAA GAME
March Madness is the name given to (among others) the NCAA Men’s Division 1 Basketball Championship, held in spring each year.

20. WBA decisions TKOS
In boxing, a knockout (KO) is when one of the fighters can’t get up from the canvas within a specified time, usually 10 seconds. This can be due to fatigue, injury, or the participant may be truly “knocked out”. A referee, fighter or doctor may also decide to stop a fight without a physical knockout, especially if there is concern about a fighter’s safety. In this case the bout is said to end with a technical knockout (TKO).

27. Yellowstone grazer BISON
There two species of bison left (four species are extinct). We are most familiar with the American bison, but there is a also a European bison, sometimes called a “wisent”.

Yellowstone National Park was the first National Park to be established in the world, when it was designated as such by President Grant in 1872. What a great tradition it started! The American National Parks truly are a treasure …

31. Comic who wrote jokes for Kennedy SAHL
Mort Sahl is a Canadian-born actor and comedian who moved to the US with his family when he was a child. Sahl became friends with John F. Kennedy. When Kennedy became president, Sahl wrote a lot of jokes for the President’s speeches, although he also told a lot of Kennedy jokes in his acts. After the President was assassinated in 1963, Sahl was intensely interested in finding out who was behind the crime and even got himself deputized as a member of one of the investigating teams. He was very outspoken against the results of the Warren Commission report on the assassination, and soon found himself out of favor with the public. It took a few years for him to make his comeback, but come back he did.

34. Language “jai alai” comes from BASQUE
Basque pelota is a sport played in parts of Spain. Pelota is a racket sport in which a ball is hit against a specially-built wall called a frontón. The term “pelota” is also used for the ball in the game of jai alai, and indeed jai alai is variant of Basque pelota.

36. Jersey Shore resort CAPE MAY
Cape May is a peninsula and an island that forms the southern tip of New Jersey. The US Coast Guard basic training camp is located in Cape May.

38. Nautilus letters USS
The USS Nautilus is a submarine launched in 1954, and decommissioned 1980. When launched, the Nautilus was the world’s first nuclear-powered submarine. She was named for a diesel-electric submarine that served with distinction in WWII that was also bore the Nautilus name. All of the US Navy’s “Nautilus” vessels were named for the submarine in the Jules Verne novel “Twenty Thousand Leagues Under the Sea”. After decommissioning in 1980, the latest Nautilus was preserved as a floating museum in Groton, Connecticut.

39. Show deference KOWTOW
To kowtow is to show servile deference. “Kowtow” comes from the Chinese “k’o-t’ou” which is the name for the custom of kneeling and touching the forehead to the ground in a gesture of respect. The Chinese term literally translates as “knock the head”.

43. Mullah’s faith ISLAM
In the Islamic tradition a mullah is a man or woman educates in theology and sacred law.

46. Where funnels are often seen TORNADO ALLEY
Tornado Alley has no precisely defined area, but generally lies between the Rockies and the Appalachians. It is of course the area in the US where tornadoes occur most frequently.

50. Spot at the bridge table PIP
A pip is a dot on a die or a domino, or a mark on a playing card.

54. Its capital is Valletta MALTA
The island state of Malta is relatively small, but its large number of inhabitants makes it one of the most densely populated countries in Europe. Malta’s strategic location has made it a prized possession for the conquering empires of the world. Most recently it was part of the British Empire and was an important fleet headquarters. Malta played a crucial role for the Allies during WWII as it was located very close to the Axis shipping lanes in the Mediterranean. The Siege of Malta lasted from 1940 to 1942, a prolonged attack by the Italians and Germans on the RAF and Royal Navy, and the people of Malta. When the siege was lifted, King George VI awarded the George Cross to the people of Malta collectively in recognition of their heroism and devotion to the Allied cause. The George Cross can still be seen on the Maltese flag, even though Britain granted Malta independence in 1964.

Valletta is the capital city of the island state of Malta in the Mediterranean Sea. The city is named in honor of Jean Parisot de Valette, a French nobleman who commanded the resistance against the Ottomans at the Great Siege of Malta in 1565.

55. Big name in racing ANDRETTI
Mario Andretti is a retired Italian American racing driver, named US Driver of the Year in 1967, 1978 and 1984. Both of Mario’s sons, Michael and Jeff are successful auto racers, as well as Mario’s nephew, John Andretti.

58. “Turn Me Loose” singer, 1959 FABIAN
“Fabian” is the stage name of singer Fabiano Anthony Forte, a teen idol from the fifties and sixties. Fabian came from South Philadelphia just like Frankie Avalon, and so Fabian was always somewhat in Avalon’s shadow. Now decades after his star faded, Fabian is on the road and performing with Avalon.

61. 1980 hit with the line “I longed to speak but did not dare” HE’S SO SHY
“He’s So Shy” was a 1980 hit for the Pointer Sisters. Although the title is reminiscent of the 1963 hit for the Chiffons called “He’s So Fine”, there is no relationship between the two numbers.

Down
2. Pioneer Day celebrant UTAHN
Pioneer Day is a state holiday celebrated on July 24th in Utah. The holiday commemorates the arrival into the Salt Lake Valley of Brigham Young and the first Mormon pioneers on 24 July 1847. Some members of the LDS Church celebrate by walking portions of the Mormon Trail.

4. 1963-’64 painter of the Paris Opera ceiling CHAGALL
Marc Chagall was a Russian-French artist, one of the most successful of the 20th century. Unlike so many painters, Chagall was able to achieve wealth and notoriety for his work during his own lifetime. It did help that Chagall lived to a ripe old age though. He passed away in 1985, when he was 97 years young. One of Chagall’s most famous works is the ceiling of the Paris Opera. The new ceiling for the beautiful 19th-century building was commissioned in 1963, and took Chagall a year to complete. Chagall was 77 years old when he worked on the Paris Opera project.

5. 1937 title gangster Pépé LE MOKO
“Pépé Le Moko” is a French crime film released in 1937. The movie was remade in English in 1938 as “Algiers”, starring Hedy Lamarr and Charles Boyer, and once more in 1948 as “Casbah”. “Pépé Le Moko” was an inspiration for the novel “The Third Man” by Graham Greene.

9. East German secret police STASI
The Ministry for State Security in East Germany was commonly referred to as the Stasi. “Stasi” is an abbreviation for “Staatssicherheit”, which translates as “State Security”.

25. Ill. neighbor WIS
Wisconsin is named for the Wisconsin River, the longest river in the state. The famous missionary Father Jacques Marquette recorded the Algonquian name for the river as “Meskousing”. This was modified by French explorers to “Ouisconsin”, with the first syllable pronounced just like the French word for “yes” … “oui’. In the early 1800s this was anglicized to “Wisconsin”.

31. “The Storyteller” storyteller SAKI
Hector Hugh Munro was a British writer, actually born in Burma. Munro was famous for his short stories, which he published using the pen name “Saki”. His most well-known story is “The Open Window”, which ends with the great line “Romance at short notice was her specialty”.

32. Book by a prophet AMOS
Amos is one of the twelve minor prophets in the Hebrew Bible. Before becoming a prophet, Amos was sheep herder and a fig farmer.

36. Interrogación word COMO
“Como” is a word found in a question (interrogación) in Spanish.

40. Use a shuttle TAT
One is “tatting” when one is making lace. The word “tatting” has been around since the 1830s, but no one seems to have unearthed its etymology.

45. City on the Volga SAMARA
Samara is a city in Russia lying at the confluence of the Volga and Samara Rivers. The Volga River has been the lifeblood of the city for centuries.

48. Net biz ETAIL
“Etail” is the term used these days for online shopping. Etail is often compared to regular shopping in the “real world” by juxtaposing it with a “brick and mortar” store.

49. ’50s TV adventurer __ Derringer YANCY
“Yancy Derringer” is a Western television show that first aired in the late fifties. The title character an ex-Confederate Army officer who becomes a gentleman adventurer based in New Orleans. Star of the show was actor Jock Mahoney.

52. Modern info holders PDAS
A device like perhaps an iPhone, Droid, or Treo can be termed a Personal Digital Assistant (PDA).

57. That, in Tijuana ESO
Tijuana is the largest city in the Mexican state of Baja California, and lies just across the US-Mexico border from San Diego. Tijuana is also the most westerly of all Mexican cities. A lot of Tijuana’s growth took place in the twenties as tourists flocked south of the border during the days of prohibition in the US. One of the many casinos and hotels that flourished at that time was Hotel Caesar’s in the Avenida Revolución area. Hotel Caesar’s claims to be the birthplace of the now ubiquitous Caesar Salad.

58. Bit of fiction FIB
To “fib” is to “to tell a lie”. The term likely comes from “fibble-fable” meaning “nonsense”, itself derived from “fable”.