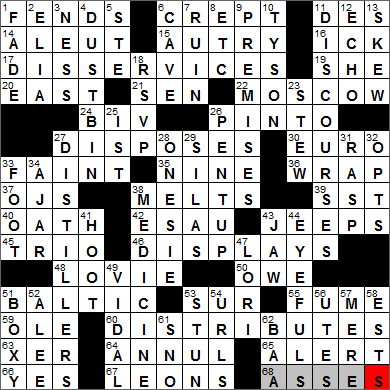 CROSSWORD SETTER: Jerry Edelstein
THEME: Dissing Things … today’s themed answers are words starting with the prefix “dis-”, although the answers are clued as two words, the first being DIS:

Today’s Wiki-est, Amazonian Googlies
Across
11. __ Moines, Iowa DES
The city of Des Moines is the capital of Iowa, and takes its name from the Des Moines River. The river in turn takes its name from the French “Riviere des Moines” meaning “River of the Monks”. It looks like there isn’t any “monkish” connection to the city’s name per se. “Des Moines” was just the name given by French traders who corrupted “Moingona”, the name of a group of Illinois Native Americans who lived by the river. However, others do contend that French Trappist monks, who lived a full 200 miles from the river, somehow influenced the name.

15. Cowboy singer Gene AUTRY
Gene Autry was a so-called singing cowboy who had an incredibly successful career on radio, television and in films starting in the thirties. Autry’s signature song was “Back in the Saddle Again”, and his biggest hit was “Rudolph the Red-Nosed Reindeer”. He also had a hit with his own Christmas song called “Here Comes Santa Claus”. There’s even a town in Oklahoma called Gene Autry, named in his honor.

21. One of a D.C. 100 SEN
The six-year terms enjoyed by US senators are staggered, so that every two years about one third of the US Senate seats come up for reelection.

22. Russian capital MOSCOW
Moscow is of course the capital of Russia. If one considers Europe to be all points west of the Ural Mountains, then Moscow is the most populous city on the continent. Moscow also is home to more billionaires than any other city in the world, according to “Forbes” magazine. The city is named for the Moskva River which flows through Moscow.

26. Piebald horse PINTO
A “pinto” is a horse with patchy markings of white mixed with another color. “Pinto” means “painted” in American Spanish.

A piebald (or pied) horse is one with dark patches on a white background. A skewbald horse on the other hand is dark with white patches.

30. It replaced the French franc EURO
The European Union (EU) today stands at a membership of 27 states. The Euro is the official currency of only 16 of the 27. The list of states in the EU that don’t use the Euro includes the UK, Denmark and Sweden.

35. Mudville number NINE
“Casey at the Bat” is a poem written in 1888 by Ernest Thayer, first published in the San Francisco Examiner. The poem became very popular due to repeated live performances in vaudeville by DeWolf Hopper. Casey played for the Mudville Nine, and the last line of the poem is “But there is no joy in Mudville – mighty Casey has struck out.”

36. Complete, as a scene WRAP
When shooting of a film is concluded the movie is said to “wrap”, and everyone heads to the wrap party. There is one story that “wrap” is actually an acronym for “wind, reel and print”, a reference to the transition of the filming process into post-production. But, this explanation is disputed.

39. Grounded jet SST
The most famous supersonic transport (SST) is the retired Concorde. First flown in 1969 and entering service in 1976, Concorde was retired in 2003. The plane was withdrawn largely due to the downturn in the aviation business following the September 11th attacks. There was also the one and only crash of a Concorde in 2000, after taking off from the Charles de Gaulle airport in Paris. That didn’t help business …

42. Isaac’s eldest ESAU
Esau, was the grandson of Abraham and the twin brother of Jacob, the founder of the Israelites. When Esau was born to Isaac and Rebekah, the event was described in the Bible as “Now the first came forth, red all over like a hairy garment”. Esau is portrayed later in life as being very different from his brother, as a hunter and someone who loves the outdoor life.

43. Wranglers with wheels JEEPS
Chrysler’s Jeep Wrangler is a direct descendent of the military “Jeep” vehicle that was heavily relied on during WWII.

45. Folk music’s Kingston __ TRIO
The KIngston Trio is a folk and pop music group from San Francisco that formed in 1967. The original lineup disbanded in 1967, although there there is a derivative lineup still performing today. The Kingston Trio’s biggest is 1958’s “Tom Dooley”, which was also their first hit.

48. Former Bears head coach Smith LOVIE
Lovie Smith was the head coach for the Chicago Bears football team from 2004 to 2012.

51. Sea near Stockholm BALTIC
The Baltic is a sea in northern Europe that is much less saline than the oceans. The lower amount of salt in the Baltic partially explains why almost half of the sea freezes during the winter. In fact, the Baltic has been known to completely freeze over several times over the past few centuries.

Stockholm is the capital of Sweden and most populous city in the country. Over one fifth of all Swedish residents live in Stockholm.

63. Gen-__: boomer’s kid, probably XER
The term Generation X originated in the UK where it was the name of a book by Jane Deverson. Her book detailed the results of a study of British youths in 1964, contrasting their lifestyle to those of previous generations. It was Canadian author Douglas Coupland who was responsible for popularizing the term, with his more successful publication “Generation X: Tales for an Accelerated Culture”. By the latest accepted definition, Gen-Xers were born between 1961 and 1981.

67. Trotsky and Uris LEONS
Leon Trotsky was a Soviet politician and revolutionary, the founder and first leader of the Red Army as well as one of the first members of the Politburo. Trotsky was ousted and deported in 1929 when he opposed the policies of Joseph Stalin. Trotsky continued to be vocal in opposition to Stalin in Mexico, his place of exile. Stalin had him assassinated there in 1940.

Down
2. “On the Waterfront” director Kazan ELIA
Elia Kazan won Oscars for best director in 1948 for “Gentleman’s Agreement” and in 1955 for “On The Waterfront”. In 1999 Kazan was given an Academy Lifetime Achievement Award. He also directed “East of Eden”, which introduced James Dean to movie audiences, and “Splendor in the Grass” that included Warren Beatty in his debut role.

The 1954 drama “On the Waterfront”, starring Marlon Brando, told a story of violence and corruption among longshoremen. The movie was based on a series of 24 articles written by investigative journalist Malcolm Johnston and published in “The New York Sun”. The original news stories uncovered mob infiltration on the New York City Waterfront, but the location for the film was chosen as Hoboken, New Jersey.

5. Sault __ Marie STE
In the summer of 2010 I spent a very interesting afternoon watching ships make their way through the Soo Locks and Soo Canal between Lake Superior and the lower Great lakes. The name “Soo” comes from the US and Canadian cities on either side of the locks, both called Sault Ste. Marie.

6. Batman’s hideout CAVE
Wayne Manor is where Bruce Wayne lives, the alter-ego of Batman. It is a huge manor that lies just outside Gotham City. Looking after the house is the Wayne family servant, Alfred. Beneath the grounds of the manor is an extensive cave system where Bruce Wayne put together his Batcave. Access is to the cave is via a staircase behind a hidden door. The door is opened by moving the hands of a non-functioning grandfather clock to 10:47, the time at which Wayne’s parents were murdered. It is the murder of his parents that sets Bruce off on his journey of crime fighting.

10. Big name in chicken TYSON
Tyson Foods is the largest producer of meat in the world. Even though we tend to associate Tyson with chicken here in North America, the company is also the largest exporter of beef out of the US.

23. Bouillabaisse, e.g. STEW
Bouillabaisse is a traditional seafood stew that originated in the port city of Marseille on the Mediterranean coast of France.

29. “__ Marner”: Eliot work SILAS
“Silas Marner: The Weaver of Raveloe” is a novel written by George Eliot and first published in 1861. There’s an excellent BBC TV version of the tale (shown on PBS) starring Ben Kingsley in the title role, with Patsy Kensit playing Eppie, the young orphaned child that Marner takes under his wing.

George Eliot was the pen name of English novelist Mary Anne Evans. As one might think, Evans chose a male pen name in order that her work might be best appreciated in the Victorian era. Eliot wrote seven novels including “Adam Bede” (1859), “The Mill on the Floss” (1860), “Silas Marner” (1861) and “Middlemarch” (1871-72).

34. Open a bit AJAR
Our word “ajar” is thought to come from Scottish dialect, in which “a char” means “slightly open”.

47. “Footloose” co-star Singer LORI
Lori Singer is an actress, and also a cellist. Singer’s most famous acting role was the daughter of the Reverend Shaw Moore (played by John Lithgow) in “Footloose”.

The 1984 musical drama “Footloose” tells the story of a Chicago teen (played by Kevin Bacon) who moves to a small town in which dancing and rock music has been banned. The storyline is loosely based on real events in the Oklahoma City of Elmore. Dancing was banned in Elmore for almost 100 years, with the ban eventually being lifted in 1980.

49. “Myra Breckinridge” author Gore VIDAL
Gore Vidal was an author and political activist from West Point, New York. Vidal’s most celebrated novel is probably “Myra Breckinridge”. His most controversial work has to be “The City and the Pillar” from 1948, which is cited as one of the first major novels to feature unambiguous homosexuality.

Even today, Gore Vidal’s 1968 novel “Myra Breckinridge” is considered controversial. I haven’t read it, but I understand it addresses transsexuality and other sexual practices usually considered to be outside the norm. There was a movie version of the novel made in 1970, with Raquel Welch in the title role.

51. Like the Honda Element BOXY
The Honda Element is such a quirky looking car, and I love it. If things don’t change, when my wife’s van runs out of its final tank of gas, we’ll be heading for the Honda dealership. The rear doors of the Element open from the front, the so called “suicide door” design. However, the rear doors won’t open unless the front are open as well, so “suicide” is unlikely.

56. Beehive State natives UTES
The Ute is a group of Native American tribes that now resides in Utah and Colorado. The Ute were not a unified people as such, but rather a loose association of nomadic groups.

61. __-cone SNO
A sno-cone (also “snow cone”) is just a paper cone filled with crushed ice and topped with flavored water. Italian ice is similar, but different. Whereas the flavoring is added on top of the ice to make a sno-cone, Italian ice is made with water that is flavored before it is frozen.