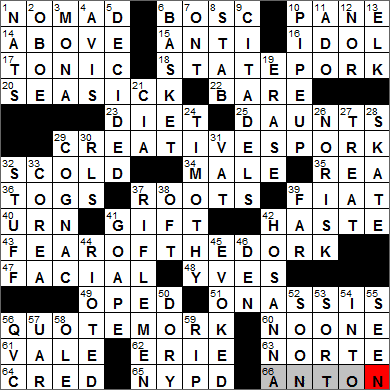 Today’s Wiki-est, Amazonian Googlies
Across
6. Pear that’s good for poaching BOSC
Bosc is a cultivar of the European Pear grown in the northwest of the United States. The Bosc is that pear with a skin the color of a potato, with a long neck. I always seem to use the potato as my point of reference. How Irish am I …?

17. Pick-me-up TONIC
A tonic is medication that is said to restore health. The original use of the term “tonic” was as an adjective meaning “increasing body tone”.

18. Governor’s pet projects? STATE PORK (from “state park”)
Pork barrel politics have been around for a long time. The term originated in 1863 in a story by Edward Everett Hale called “The Children of the Public”. Hale used “pork barrel” in a positive way, describing any public spending by government for the benefit of citizens. By the 1870s the term “pork” had negative connotations, with references in the press to “pork barrel bills” in Congress. Nowadays “pork” really applies to any government project designed to benefit a relatively small group of citizens (usually potential voters for a particular politician) with the bill being paid by the citizenry as a whole.

20. Like one who forgot the Dramamine SEASICK
Dramamine is a brand name for dimenhydrinate, a drug used to counteract motion sickness.

29. Utensil that gives you ideas? CREATIVE SPORK (from “creative spark”)
“Spork” is the more common name for the utensil that is a hybrid between a spoon and a fork. It is less commonly referred to as a “foon”.

35. Blues-rocker Chris REA
Chris Rea is a singer-songwriter and respected blues guitar player from England. Rea’s biggest hit is a song that he wrote himself called “Fool (If You Think It’s Over”), released in 1978.

36. Clothes TOGS
“Toggery” is another word for clothing, sometimes shorted to “togs”. For example, back in Ireland we call a bathing suit “swimming togs”. The term “toggery” comes from the Latin “toga”.

37. Alex Haley classic ROOTS
Not only did Alex Haley author the magnificent novel “Roots”, but he was also the collaborator with Malcolm X on “The Autobiography of Malcolm X”. His 1976 novel “Roots” is based on Haley’s own family history, and he claimed to be a direct descendant of the real life Kunta Kinte, the slave who was kidnapped in the The Gambia in 1767. If you remember the fabulous television adaptation of “Roots”, you might recall that Kunta Kinte was played by LeVar Burton, who later went on to play another famous role, Geordi La Forge on “Star Trek: the Next Generation”.

39. Abarth automaker FIAT
Abarth is a company that produces racing cars, and which is now owned by Fiat. Fiat used the Abarth name on some of the sporty versions of various Fiat models.

48. First name in fashion YVES
Yves Saint-Laurent was a French fashion designer, actually born in Algeria. Saint-Laurent started off working as an assistant to Christian Dior at the age of 17. Dior died just four years later, and as a very young man Saint-Laurent was named head of the House of Dior. However, in 1950 Saint-Laurent was conscripted into the French Army and ended up in a military hospital after suffering a mental breakdown from the hazing inflicted on him by his fellow soldiers. His treatment included electroshock therapy and administration of sedatives and psychoactive drugs. He was released from prison, managed to pull his life back together and started his own fashion house. A remarkable story …

51. Olympic Airways founder ONASSIS
Aristotle Onassis was born to a successful Greek shipping entrepreneur in Smyrna in modern-day Turkey. However, his family lost its fortune during WWI and so Aristotle worked with his father to build up a new business empire centered on the importation of tobacco. In 1957, Aristotle founded the Greek national airline, what is today called Olympic Air, and he also got into the business of shipping oil around the world. He married Athina Livanos in 1946, the daughter of a wealthy shipping magnate. They had two children, including the famous Christina Onassis. Livanos divorced Onassis on discovering him in bed with the opera singer Maria Callas. Onassis ended his affair with Callas in order to marry Jackie Kennedy in 1968.

56. Say “Come in, Orson!” e.g.? QUOTE MORK (from “quote mark”)
“Mork & Mindy” is a sitcom that originally aired from 1978 to 1982. The title characters were played by Robin Williams and Pam Dawber. Mork is an alien from the planet Ork who reports back to his superior called Orson. Orson is played by voice actor Ralph James. Ralph James was also known for providing the voice of Mr Turtle in famous Tootsie Pop commercials in the seventies.

62. Iroquoian people ERIE
The Erie people were Native Americans who lived on the south shore of Lake Erie. The Erie lost out in wars with the Iroquois in the 1700s. The remnants of the Erie people were absorbed into neighboring tribes.

64. Rep on the street CRED
“Street cred” is slang for “street credibility”, of which I have none …

66. Composer Bruckner ANTON
Anton Bruckner was an Austrian composer, not a favorite of mine as he embraces the use of dissonances (I’m a sober traditionalist!). Bruckner’s Symphony No. 7 is perhaps his most popular work. He created a slow and mournful movement for the work in recognition of the impending death of Richard Wagner, whom he greatly admired.

Down
1. Expos, since 2005 NATS
The Washington Nationals baseball team started out life as the Montreal Expos in 1969. The Expos moved to Washington in 2005 becoming the Nats. There are only two Major Leagues teams that have never played in a World Series, one being the Mariners and the other the Nats.

2. High wind OBOE
The oboe is perhaps my favorite of the reed instruments. The name “oboe” comes from the French “hautbois” which means “high wood”. When you hear an orchestra tuning before a performance you’ll note (pun intended!) that the oboe starts off the process by playing an “A”. The rest of the musicians in turn tune to that oboe’s “A”.

6. Hoops score BASKET
Basketball is truly an American sport. It was created in 1891 by a James Naismith at the YMCA in Springfield, Massachusetts. His goal was to create something active and interesting for his students in the gym. The first “hoops” were actually peach baskets, with the bottoms of the baskets intact. When a player got the ball into the “net”, someone had to clamber up and get the ball back out again in order to continue the game!

7. London’s prov. ONT
The city of London, Ontario lies about halfway between Detroit, Michigan and Toronto, Ontario. Just like the city’s better known namesake in England, Canada’s London is located on a river called the Thames.

9. Fortresses CITADELS
A citadel is a fortress built to protect a town or a city. Both the words “city” and “citadel” come from the Latin word “civis” meaning “citizen”.

12. Eur. kingdom NOR
Norway has been ranked as the country in the world with the highest standard of living almost every year since 2001. Norway is rich in natural resources and has a relatively low population. The people benefit from a comprehensive social security system, subsidized higher education for all citizens and universal health care.

13. Antlered bugler ELK
Male elks are called bulls, and females are known as cows. Bull elks are known for their very loud screaming, which is called bugling. Cow elks are attracted to bulls that bugle more often and most loudly.

24. Recipient of two New Testament epistles TIMOTHY
The New Testament’s First and Second Epistles to Timothy are letters that were written by Saint Paul to Timothy, a young colleague of his.

29. After-dinner drink COGNAC
Cognac is a most famous variety of brandy named after the town of Cognac in the very west of France. To be called cognac, the brandy must be distilled twice in copper pot stills and aged at least two years in very specific French oak barrels. It is the length of this aging that defines the various grades of cognac (and other brandies):

30. Jekyll creator’s initials RLS
Robert Louis Stevenson’s novella “The Strange Case of Dr. Jekyll and Mr. Hyde” was first published in 1886. There are many tales surrounding the writing of the story including one that the author wrote the basic tale in just three to six days, and spent a few weeks simply refining it. Allegedly, Stevenson’s use of cocaine stimulated his creative juices during those few days of writing.

33. Chick of jazz COREA
Chick Corea is an American jazz pianist. Corea is noted for his work in the area of jazz fusion, as well as for his promotion of Scientology.

37. Winchester wielders RIFLEMEN
The Winchester rifle was one of the first repeating rifles to be manufactured in volume. The Winchester repeater is known as “The Gun that Won the West”.

42. Liturgical shout of praise HOSANNA!
“Hosanna” is derived from Hebrew, probably from the term “hoshi’ah-nna” meaning “save, we pray”.

50. Fishing boat DORY
A dory is a small boat, around 20 feet long with a shallow draft, a flat bottom and a sharp bow. Dories are commonly used for fishing.

53. Spreadsheet function SORT
In an electronic spreadsheet, such as Microsoft Excel, one can select a block of data and use the command “sort” to reorder the data. You can sort the data perhaps alphabetically or in numerical order.

56. Home shopping channel QVC
The QVC shopping channel was founded in 1986 in West Chester, Pennsylvania. The company now has operations not only in the US but also in the UK, Germany, Japan and Italy. That means QVC is reaching 200 million households. The QVC acronym stands for Quality, Value and Convenience.

57. Nasser’s confed. UAR
Gamal Abdel Nasser was the second president of Egypt, from 1956 until he died in 1970. He stood alongside Muhammad Naguib, Egypt’s first president, during the Egyptian Revolution of 1952 that overthrew the ruling monarchy of Egypt and Sudan. Nasser was an advocate of Pan-Arabism, an ideology promoting unification of Arab peoples and countries. President Nasser went so far as forming the United Arab Republic (UAR), a union between Egypt and Syria that started in 1958 but fell apart in 1961 when Syria withdrew.

58. Cry for a picador OLE!
In Spanish bullfighting, picadors are horsemen that take on a bull in pairs, using lances to jab the poor creature. The picadors have a specific job, to lacerate the muscle on the back of the bull’s neck and to fatigue him before the toreros (bullfighters) are let loose.

59. Fashionable jeans feature RIP
The rips in my jeans couldn’t really be described as fashionable …