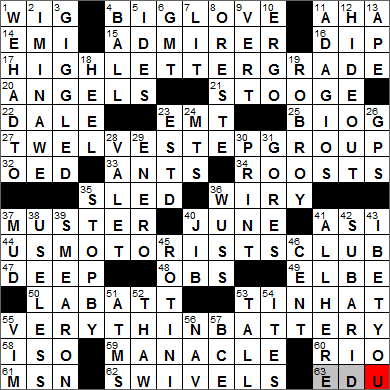 CROSSWORD SETTER: Jeffrey Wechsler
THEME: The A’s … today’s themed clues are a progression of more and more letters A:

17A. A HIGH LETTER GRADE
27A. AA TWELVE-STEP GROUP
44A. AAA US MOTORISTS CLUB
55A. AAAA VERY THIN BATTERY

Today’s Wiki-est, Amazonian Googlies
Across
4. 2000s HBO drama set in Utah BIG LOVE
“Big Love” is a very absorbing HBO drama series about a polygamous man and his three families trying to live a relatively “normal” life in Utah. The lead is played by Bill Paxton, and his first wife by Jeanne Tripplehorn. I recommend it for its entertainment value, but should point out that it has been frowned upon by some churches.

15. Valentine sender ADMIRER
Saint Valentine’s Day was chosen by Pope Gelasius I in 496 AD to honor various martyrs with the name Valentine. However, the saints’ day was dropped by the Catholic church in 1969, by Pope Paul VI. Try telling that to Hallmark though …

22. Author Carnegie DALE
Dale Carnegie wrote and lectured on self-improvement. His most famous book is “How to Win Friends and influence People”, which was first published in 1936. Carnegie made the clever move of changing the spelling of his family name from “Carnagey”. In so doing, he used the goodwill associated with the name of industrialist Andrew Carnegie who was much revered at the time, even though there was no relation. Dale even rented Carnegie Hall and delivered a lecture to a full house.

27. AA TWELVE-STEP GROUP
Alcoholics Anonymous (AA) was founded in 1935, by Bill Wilson and Dr. Bob Smith in Akron, Ohio. As the organization grew, the guiding principles established by the founders were formatted into a 12-step program that was in place by the forties.

32. Venerable ref. OED
The “Oxford English Dictionary” (OED) contains over 300,000 “main” entries and 59 million words in total. It is said it would take a single person 120 years to type it out in full. The longest entry for one word in the second edition of the OED is the verb “set”. When the third edition was published in 2007, the longest entry for a single word became the verb “put”. Perhaps not surprisingly, the most-quoted author in the OED is William Shakespeare, with his most quoted work being “Hamlet”. The most-quoted female author is George Eliot (aka Mary Ann Evans).

35. Rosebud, notably SLED
A central plot line in the 1941 movie “Citizen Kane” is a newsreel reporter’s quest to find the meaning of the dying word spoken by the title character: “Rosebud”. Spoiler Alert … it is revealed at the end of the movie that “Rosebud” is the name of the sled used by Kane in his childhood, the only period in which he was really happy.

37. Good thing to pass MUSTER
“To pass muster” means “to be deemed acceptable”. One musters troops, often for inspection. So, the original meaning of “pass muster” was to “get through a military inspection successfully”.

40. When Bloomsday, which celebrates Joyce’s “Ulysses,” is observed JUNE
Regular readers will know that I am unashamedly supportive of my native Irish culture, but I have to tell you that I can’t handle the works of James Joyce. I have spent many a fine day traipsing around Ireland learning about his life, but I have yet to appreciate one of his books. To me, his life is more absorbing than his writing. Having said that, “Ulysses” is an interesting novel in that it chronicles just one ordinary day in the life of a Dubliner named Leopold Bloom. There’s a huge celebration of “Ulysses” in Dublin every year on June 16th, called Bloomsday. The festivities vary from readings and performances of the storyline, to good old pub crawls.

44. AAA US MOTORISTS CLUB
The American Automobile Association (AAA) is a not-for-profit organization focused on lobbying, provision of automobile servicing, and selling of automobile insurance. The AAA was founded in 1902 in Chicago and published the first of its celebrated hotel guides back in 1917.

48. 32-Across cousin of arch. OBS
(32A. Venerable ref. OED)
I think that the inference here is that the terms “archaic” and “obsolete” have the same or similar meanings, with “archaic” being used in an American dictionary where “obsolete” might be used in an English dictionary.

50. Canadian brewery LABATT
The Labatt Brewing Company is the largest brewer in Canada. The company was founded by John K. Labatt in London, Ontario in 1847.

53. Doughboy’s helmet TIN HAT
The American soldiers that headed overseas during WWI wear often known as “doughboys”. The term had been used as early as the 1840s and persisted till WWII, when it was quickly replaced by “GI”. There are a number of theories about the origins of “doughboy”, but the exact etymology isn’t too clear.

55. AAAA VERY THIN BATTERY
Because batteries have been around for so long now, there were many different standards set for sizes and configurations by different countries. There is now an international standard which tries to bring as many of the old disparate standards together as possible. A AAAA battery is just over 4 cm long, and only 8.3 mm in diameter. Yep, it’s pretty tiny …

58. Prefix with tonic ISO-
“Isotonic” means “of equal tension” and is of Greek origin. There are two common uses of the term. Solutions of equal concentration are said to be isotonic. An isotonic solution of saline has the same amount of salt (NaCl) as there is in blood. Also, in the isotonic contraction of a muscle, the amount of tension stays the same whereas the muscle’s length changes. Lifting an object at a constant speed causes the isotonic contract of the lifting muscle.

59. Restraining device MANACLE
A manacle is a device for constraining the hands, like handcuffs. The term comes from the Latin “manicula” which means “handle” or literally “little hand”.

60. Carnival setting RIO
Rio de Janeiro is the second largest city in Brazil (after São Paulo). “Rio de Janeiro” translates as “January River”. The name reflects the discovery of the bay on which Rio sits, on New Years Day in 1502.

The celebration of carnival comes right before the Lenten period in some Christian traditions. It is thought that carnival perhaps arose from the need to “eat and drink up” any excess food and drink before the beginning of Lent.

Down
4. Scene of a lost glass slipper BALL
The folk tale about “Cinderella” was first published by French author Charles Perrault in 1697. The storyline of the tale may date back as far as the days of Ancient Greece. A common alternative title to the story is “The Little Glass Slipper”.

In Act I of William Shakespeare’s “Julius Caesar” a soothsayer warns the doomed emperor to “beware the Ides of March”. Caesar ignores the prophecy and is of course killed on the steps of the Capitol by a group of conspirators on that very day.

8. Handel opera written in Italian ORESTE
Handel’s Italian opera “Oreste” was written and composed in England, and first performed in 1734 at Covent Garden Theatre in London. “Oreste” wasn’t well received by the public. Handel pulled together the opera mainly using pieces of music that he had already composed and published, so in one sense “Oreste” wasn’t an “original” work.

10. Consequently ERGO
“Ergo” is the Latin word for “hence, therefore”.

11. Slow movements ADAGIOS
An adagio is a piece of music with a slow tempo. The “adagio” marking on the score is an instruction to play the piece slowly and in a stately manner. The word adagio is Latin for “at ease”.

19. Manhattan variety ROB ROY
Rob Roy was a folk hero in Scotland from the 18th century. He was a sort of Scottish Robin Hood, an outlaw who had the support of the populace. Rob Roy’s full name was Robert Roy MacGregor, itself an anglicization of the Scottish Raibeart Ruadh. He gave his name to a famous cocktail called a Rob Roy, a relative of the Manhattan that is made with Scotch instead of bourbon.

24. Hood et al.: Abbr. MTS
Mount Hood is a volcanic peak in northern Oregon. Mount Hood is the highest peak in the state, and is located about 50 miles southeast of Portland. There are six ski areas on the mountain, including a resort called Timberline that has North America’s only lift operating year-round for skiing.

36. Milquetoast WUSS
Someone described a “milquetoast” is particularly weak and timid. The term comes from a character called Caspar Milquetoast in the comic strip “The Timid Soul” drawn by H. T. Webster. Webster came up with Caspar’s name by deliberately misspelling “milk toast”, which is a bland food that is suitable for someone with a weak stomach.

40. Foresail JIB
A jib is a triangular sail that is set at the bow of a sailboat.

45. Twisty pasta ROTINI
Rotini is the corkscrew-shaped pasta that is often used in pasta salads. Even though “rotini” sounds like it comes from a word meaning “twist, rotate”, the word “rotini” doesn’t exist in Italian, other than as the name for the pasta.

46. It’s mostly made of zinc CENT
The original one-cent coin was introduced in the US in 1793 and was made of 100% copper. The composition varied over time, and was 100% bronze up to the 1940s. During WWII there was a shortage of copper to make bronze, so the US Mint switched to zinc-coated steel for production of one-cent coins in 1943. The steelie is the only coin ever issued by the US mint that can be picked up by a magnet. Today’s one-cent coin is comprised mainly of zinc.

51. Some NCR devices ATMS
NCR is an American company that has been in business since 1884, originally called the National Cash Register Company. The company has done well in a market where new technologies seem to be constantly disrupting the status quo.

53. Starbucks order TALL
Starbucks is a coffee company based in Seattle, Washington. It is the largest coffeehouse company in the world and has over 19,000 stores. In the 1990s, Starbucks was opening one new store every single day! Starbucks is named after the chief mate on the Pequod in the Herman Melville book “Moby Dick”.

57. Pre-A.D. BCE
The designations Anno Domini (AD, “year of Our Lord”) and Before Christ (BC) are found in the Julian and Gregorian calendars. The dividing point between AD and BC is the year of the conception of Jesus, with AD 1 following 1 BC without a year “0” in between. The AD/BC scheme dates back to AD 525, and gained wide acceptance soon after AD 800. Nowadays a modified version has become popular, with CE (Common/Christian Era) used to replace AD, and BCE (Before the Common/Christian Era) used to replace BC.