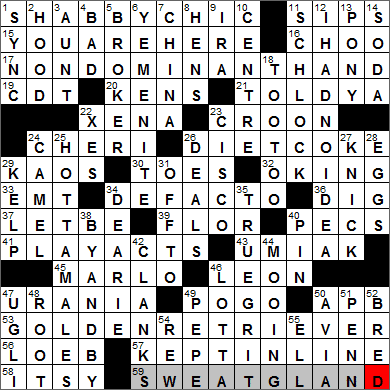 Today’s Wiki-est, Amazonian Googlies
Across
1. Faux-antique décor SHABBY CHIC
Shabby chic is the name of a style of interior design. The look is very elegant, and mimics the style seen in large country house in Britain that have many word and faded furniture items. The shabby chic look is usually achieved using furniture items that have been given a faux-antique finish.

16. Malaysian Chinese shoe designer Jimmy CHOO
Jimmy Choo is a designer of handmade women’s shoes who was born in Malaysia but grew up and was educated in London. Choo sold the 50% stake that he had in his shoe manufacturing company in 2001, for 10 million pounds.

The Chicago Cubs is one of only two charter members of the baseball’s National League who are still playing, the other being the Atlanta Braves. The Cubs last won the World Series in 1908, which is a long time ago. In fact, the Cubs have the longest championship drought of any professional sports team in North America.

20. Hidden Valley competitor KEN’S
The food manufacturing company called Ken’s Foods is known for its salad dressings. As well as selling its own products, it is Ken’s Foods that manufactures the Newman’s Own brand under contract.

22. Small-screen princess XENA
The Xena character, famously played by New Zealander Lucy Lawless, was introduced in a made-for-TV movie called “Hercules and the Amazon Women”. Lawless reprised the role in a series called “Hercules: The Legendary Journeys”. Xena became so popular that a series was built around her character, with Lawless retained for the title role.

24. Word in a Le Pew address CHERI
Pepé Le Pew is a very likeable cartoon character from the Looney Tunes and Merrie Melodies series. Pepé is a French skunk, first introduced way back in 1945. He is always thinking of “l’amour” and chases the lady skunks, or a black cat with a white stripe painted down her back accidently.

26. Tab alternative DIET COKE
Diet Coke is a sugar-free version of Coca Cola that was introduced back in 1982. If you drink Diet Coke around the world, you’ll receive a slightly different drink depending on where you are. Various artificial sweeteners are banned as health risks in various countries, so Coke varies its formulation to comply with local laws.

Tab was the first diet cola introduced by the Coca-Cola company, in 1963. It was produced as a competitor to the very successful Diet Rite cola that was made by RC Cola. The name “Tab” was used as the beverage was aimed at people who wanted to keep “tabs” on their weight.

29. Foe of the fictional spy agency CONTROL KAOS
The satirical comedy series called “Get Smart” was the creation of Mel Brooks and Buck Henry, and starred Don Adams as Agent 86, Maxwell Smart. Agent 86 worked for the spy agency CONTROL, alongside the lovely Agent 99. CONTROL’s sworn enemy was the criminal organization called KAOS. Smart’s shoe phone was a hilarious prop used in almost every episode. When Smart dialed the number 117, the shoe converted into a gun. Cool stuff …

30. Pump parts TOES
A pump is a woman’s shoe that doesn’t have a strap. Such shoes are probably called “pumps” because of the sound they make while walking in them.

39. Jardín occupant FLOR
In Spanish, one tends to find a flower (flor) in a garden (jardín).

40. They’re built on benches PECS
“Pecs” is the familiar term for the chest muscle, more correctly known as the pectoralis major muscle. “Pectus” is the Latin word for “breast”.

The Yupik are a group of peoples in Alaska and the Russian Far East. The Yupiks are a subgroup of the larger group of Eskimo peoples.

45. Thomas who co-created “Free to Be… You and Me” MARLO
Marlo Thomas’s most famous role was playing the title character in the television sitcom “That Girl”. Thomas is also well known as a spokesperson for St. Jude Children’s Research Hospital.

“Free to Be… You and Me” is a project sponsored by the Ms. Foundation for Women. AS part of the project, an album and book aimed at children was produced under the “Free to Be… You and Me” title. The songs and stories contained therein are designed to promote gender neutrality, individuality and tolerance. The album and book were the idea of actress Marlo Thomas, and she signed up some of her celebrity friends to participate in the project including Alan Alda, Carol Channing, Michael Jackson, Shirley Jones and Diana Ross.

47. Astronomy Muse URANIA
In Greek mythology, the muses are the goddesses who inspire the creation of literature and the arts. The number of muses is a subject of debate at times, but the most popular view is that there are nine:

49. Stick with a spring POGO
What we know today as a pogo stick was invented in Germany by Max Pohlig and Ernst Gottschall. The name “pogo” comes from the first two letters in each of the inventors’ family names: Po-hlig and Go-ttschall.

50. Brief black-and-white flash? APB
An All Points Bulletin (APB) is a broadcast from one US law enforcement agency to another.

53. Hunter’s companion GOLDEN RETRIEVER
The breed of dog called the Golden Retriever originated in Scotland in the mid-1700s. The breed was developed to retrieve game that had been down by hunters, whether the game was to be found in water or on land. Existing retrievers (which worked well on land) were crossed with water spaniels (which worked well in water) to come up with the Golden Retriever breed.

56. Singer of the children’s album “Camp Lisa” LOEB
The singer Lisa Loeb was discovered by actor Ethan Hawke, who lived just across the street from her in New York City. Hawke took a demo of her song “Stay (I Missed You)” and gave it to director Ben Stiller, who in turn used it over the ending credits of his 1994 movie “Reality Bites”. The movie was a hit, the song went to number one, and Loeb became the first artist ever to hit that number one spot without having signed up with a record label. Good for her!

Down
6. Dweller on the Red Sea YEMENITE
A Yemenite is a person from Yemen, and is also known as a Yemini.

8. European trio in a Christmas song HENS
There are “three French hens” in the song “The Twelve Days of Christmas”.

The fabulous Christmas Carol called “The Twelve Days of Christmas” dates back at least to 1780 when it was first published in England, and may be French in origin. The concept of twelve days of Christmas comes from the tradition that the three kings came to visit the Christ Child twelve days after he was born. This same tradition is the origin of the title to Shakespeare’s play “Twelfth Night”.

The Social Security Administration (SSA) was of course set up as part of President Franklin D. Roosevelt’s New Deal. The first person to receive a monthly retirement benefit was Ida May Fuller of Vermont who received her first check for the sum of $22.54 after having contributed for three years through payroll taxes. The New Deal turned out to be a good deal for Ms. Fuller, as she lived to 100 years of age and received a total benefit of almost $23,000, whereas her three years of contributions added up to just $24.75.

11. Cheesy stuff SCHLOCK
“Schlock” is trash, something shoddy. The term comes from the American Yiddish word “shlak”, with the same meaning.

13. Shot glass PONY
A shot glass is a small glass used to measure or hold liquor. There is no standard size for a “shot” in most parts of North America, but it is generally 1.25 to 1.5 fluid ounces. A smaller, 1 fl. oz. shot is called a “pony shot” or “short shot”.

23. “Welcome to the human network” tech giant CISCO
Cisco is a company that I really admire (in terms of innovation and management). Headquartered in San Jose, California, Cisco develops and sells products and services in the communications sector. The name “Cisco” was taken from the name of the city San Francisco.

25. “GET FIRED UP!” candy HOT TAMALES
Hot Tamales are a cinnamon candy made by Just Born. They look like red versions of the other Just Born candy called Mike and Ike. That’s no coincidence as Hot Tamales were developed as a way to make use of rejected Mike and Ike candy. The dark red color and intense cinnamon flavor was added to the Mike and Ike rejects, masking the original flavor and color.

27. Phil Jackson, for most of the ’70s KNICK
Phil Jackson is a retired basketball player and coach. Most noted as a successful coach, Jackson led the Chicago Bulls to six NBA titles and the LA Lakers to five. As such, he won more NBA titles than any other coach in history. Jackson also won two NBA titles as a player, with the New York Knicks in the seventies.

29. It may wash up onshore KELP
Kelps are large seaweeds that grow in kelp forests underwater. Kelps can grow to over 250 feet in length, and do so very quickly. Some kelps can grow at the rate of 1-2 feet per day.

35. 2010 Western remake that garnered 10 Oscar nominations TRUE GRIT
The classic 1969 western movie “True Grit” starring John Wayne is a screen adaptation of a 1968 novel by Henry Hathaway. The Coen brothers made another big screen adaption of the novel in 2010 starring Jeff Bridges in the Rooster Cogburn role previously played by John Wayne.

40. Success on a mat PIN
A successful wrestler might pin his or her opponent on the mat.

47. Jamaican hybrid fruit UGLI
The ugli fruit is a hybrid of an orange and a tangerine, first discovered growing wild in Jamaica where most ugli fruit comes from today.

49. Star of Looney Tunes’ “for Scent-imental Reasons” PEPE
That would be Pepé Le Pew, the cartoon skunk.

50. Fitness brand AVIA
The Avia brand name for athletic shoes was chosen as “avia” is the Latin word for “to fly”, and suggests the concept of aviation. Avia was founded in Oregon in 1979.

51. Ivy League member PENN
The University of Pennsylvania (Penn) was founded in 1740 by by Benjamin Franklin. Penn was the first school in the country to offer both graduate and undergraduate courses.

54. FF’s opposite REW
When watching record audio or video, fast forward (FF) is opposite to rewind (REW).