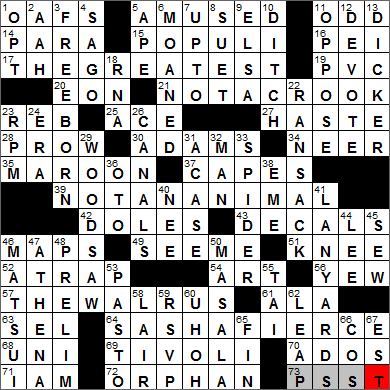 CROSSWORD SETTER: Jeff Stillman
THEME: I Am Finished … today’s themed answers are the ends of notable “I am …” lines from famous people named in the clues:

71A. Beginning for this puzzle’s five endings I AM

Today’s Wiki-est, Amazonian Googlies
Across
11. Roulette bet ODD
In the game of roulette, players can bet on odd (“pair” in French) and even (“impair” in French).

The name “roulette” means “little wheel” in French, and the game as we know it today did in fact originate in Paris, in 1796.

14. Lawyer’s assistant, for short PARA
A paralegal is someone who is trained in legal matters sufficiently to assist a lawyer. A paralegal cannot engage in the practice of law and must be supervised by a qualified lawyer.

16. Architect I.M. PEI
I. M. Pei (full name: Ieoh Ming Pei) is an exceptional American architect, born in China. Of Pei’s many wonderful works, my favorite is the renovation of the Louvre in Paris, especially the Glass Pyramid in the courtyard.

17. Ending from Ali THE GREATEST (“I am the greatest!”)
One of Muhammad Ali’s famous most famous lines is “I am the greatest!” So famous is the line that in 1963, Ali released an album of spoken word that had the title “I Am the Greatest!”

19. Plumbing pipe initials PVC
PVC is polyvinyl chloride, the third most widely produced plastic in the world (after polyethylene and polypropylene). PVC is resistant to corrosion from biological and chemical agents making it a favored choice these days for sewage lines, replacing the traditional metal materials. It is so chemically stable, that it will be around a long, long time …

21. Ending from Nixon NOT A CROOK (“I am not a crook”)
At the height of the Watergate Scandal in November 1973, President Nixon conducted a televised hour-long question-and-answer session with 400 Associated Press managing editors. The president was under intense pressure, but maintained his innocence in the Watergate case. The lines most remembered from that session are:

And in all of my years of public life I have never obstructed justice. People have got to know whether or not their President is a crook. Well, I’m not a crook.

30. Dilbert creator Scott ADAMS
“Dilbert” is a comic strip written by Scott Adams, a “neighbor” of mine here in the Bay Area. Adams used to own a nice restaurant at the end of my street …

Batman is unique among his superhero compatriots in that he has no special powers, just a whole load of cool gadgets.

39. Ending from the Elephant Man NOT AN ANIMAL (“I am not an animal”)
The 1980 film “The Elephant Man” is about the sad life of a severely deformed man in the 1800s. The movie is based on the real life of Joseph Merrick who was exhibited in a freak show as a human curiosity under the name “Elephant Man”. At the climax of the movie, Merrick is chased by an unruly mob that removes his mask and corners him. The poor man cries out, before collapsing:

43. Car window adornments DECALS
A decal is a decorative sticker, short for “decalcomania”. The term is derived from the French “décalquer”, the practice of tracing a pattern from paper onto glass or perhaps porcelain.

“Oh! Susanna” is a song that was published in 1848, written by Stephen Foster. The song is often called “Banjo on My Knee”, an understandable slip given the words of the chorus. “Oh! Susanna” came to be associated with the Forty-Niners, the miners who travelled to California in the 1849 Gold Rush. The lyrics were changed to suit the Gold rush theme with “Alabama” being replaced by “California”, and “banjo” being replaced by “washpan”.

56. Archer’s wood YEW
Yew is the wood of choice for the longbow, a valued weapon in the history of England. The longbow is constructed with a core of yew heartwood (as the heartwood resists compression) that has a sheath of yew sapwood (as the sapwood resists stretching). The yew was in such demand for longbows that for centuries yew trees were in short supply in Britain and the wood had to be imported from all over Europe.

57. Ending from Lennon and McCartney THE WALRUS (“I Am the Walrus”)
“I Am the Walrus” is a Beatles song released in 1967. It was written by John Lennon, with the Walrus being a reference to the poem “The Walrus and the Carpenter” from Lewis Carroll’s “Through the Looking-Glass”.

63. Salt, in Quebec SEL
In French, one might season one’s food with salt (sel) and pepper (poivre).

64. Ending from Beyoncé SASHA FIERCE (“I Am Sasha Fierce”)

Sasha Fierce is an alter-ego that Beyoncé Knowles has developed for her stage and recording work. She describes Sasha as very sensual and aggressive. Beyoncé released a studio album called “I Am… Sasha Fierce” in 2008.

70. Hullabaloos ADOS
Our word “hullabaloo” meaning a “commotion” is a derivative of an older term “hollo-ballo”. “Hollo-ballo” was a word used for an uproar in the north of England and Scotland.

72. Annie, for one ORPHAN
“Little Orphan Annie” is a comic strip created in 1924 by Harold Gray. The title was taken from a poem written in 1885 by James Whitcomb Riley called “Little Orphant Annie” (and yes, that spelling “orphant” is correct). Strangely enough, the original name of the poem was “Little Orphant Allie”, changed forever at its third printing, purely because of a typesetter’s error!

73. Sibilant “Hey, you!” PSST!
“Sibilant” is a word describing a sound of speech, the sound of an “s” or “z”, a hissing sound. The word “sissies”, for example, has three sibilant sounds.

Down
4. Pudding starch SAGO
When I was growing up in Ireland I was very familiar with pearl sago, which is very similar to pearl tapioca. Pearls of sago are simply little balls of sago starch used to make breads, pancakes, biscuits, or the steamed puddings that we ate as kids. Sago comes from pith of the sago palm tree. To get at the starch the tree has to be cut down and the trunk split to reveal the pith. The pith is crushed and manipulated to make the starch available, which is then washed out of a fibrous suspension. One sago palm tree yields about 150-300 kg of starch. Personally I love the stuff, but then, I am a bit weird …

5. King Kong, e.g. APE
“King Kong” really is a classic movie. It stars Fay Wray as the young woman (Ann Darrow) with whom Kong falls in love. Wray was very interested in the role as she was told that she would be playing opposite the “tallest, darkest leading man in Hollywood”. She thought it might be Clark Gable. At least that’s how the story goes …

Fat, when extracted from the carcass of an animal, is called “suet”. Untreated suet decomposes at room temperature quite easily so it has to be “rendered” or purified to make it stable. Rendered fat from pigs is what we call “lard”. Rendered beef or mutton fat is known as “tallow”.

9. Movie lioness ELSA
The life story of Elsa the lion was told by game warden Joy Adamson, who had a very close relationship with the lioness from when Elsa was orphaned as a young cub. Adamson wrote the book “Born Free” about Elsa, and then “Living Free” which tells the story of Elsa and her three lion cubs. In the 1966 film based on “Born Free”, Adamson is played by the talented actress Virginia McKenna.

18. Genetic letters RNA
Ribonucleic Acid (RNA) is an essential catalyst in the manufacture of proteins in the body. The genetic code in DNA determines the sequence of amino acids that make up each protein. That sequence is read in DNA by messenger RNA, and amino acids are delivered for protein manufacture in the correct sequence by what is called transfer RNA. The amino acids are then formed into proteins by ribosomal RNA.

38. Suffix with phon- -EME
I’m no linguist and just accept that a “phoneme” is a basic sound in a language. A language is built up from a collection of those basic sounds.

44. Grant’s opponent LEE
The Battle of Appomattox Court House was the last engagement by the Army of Northern Virginia, led by Confederate General Robert E. Lee. Immediately after the battle, Lee surrendered to Union General Ulysses S. Grant. When the two men met for the signing of the surrender documents, even though the pair were acquaintances, it was the first time they had seen each other in almost 20 years. Grant started off the conversation by discussing a previous meeting they had during the Mexican-American War, when they were fighting on the same side.

46. 2009 World Series MVP Hideki MATSUI
Hideki Matsui is a Major League Baseball player from Japan, who has played here in the US since the 2003 season. He is a power hitter and deserves his nickname “Godzilla”. He even got himself a cameo in the 2002 Japanese film “Godzilla Against Mechagodzilla”.

47. Goddess who advised Odysseus ATHENA
The Greek goddess Athena is often associated with wisdom (among other attributes). In many representations. Athena is depicted with an owl sitting on her head. It is this linkage of the owl with the goddess of wisdom that led to today’s perception of the owl as being “wise”.

All of the ingredients are toasted, and then ground together.

59. “We’d appreciate your answer,” on invitations RSVP
RSVP stands for “répondez s’il vous plaît”, which is French for “please, answer”.

65. Half a sawbuck FIN
The US five-dollar bill is often called an “Abe”, as President Lincoln’s portrait is on the front. An Abe is also referred to as a “fin”, a term that has been used for a five-pound note in Britain since 1868.

“Sawbuck” is slang for a ten dollar bill. The term was applied to the bill as the Roman numeral X (ten) resembles the end of sawhorse.

66. Comedian Bill, informally COS
The great comedic entertainer Bill Cosby is from Philadelphia. After working as a standup comedian, Cosby got his big break on television when he landed a starring role in “I Spy” alongside Robert Culp in the sixties. His greatest success on television came in the eighties and early nineties with his own sitcom “The Cosby Show”. At its height, “The Cosby Show” was the number one show in the US for five straight years.