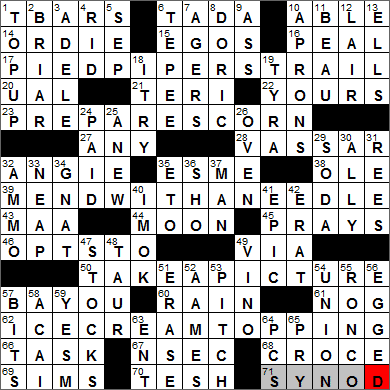 17A. RATS PIED PIPER’S TRAIL
23A. SHUCKS PREPARES CORN
39A. DARN MEND WITH A NEEDLE
50A. SHOOT TAKE A PICTURE
62A. FUDGE ICE CREAM TOPPING

Today’s Wiki-est, Amazonian Googlies
Across
1. Ski area helpers T-BARS
A T-bar is a type of ski lift in which the skiers are pulled up the hill in pairs, with each pair standing (not sitting!) either side of T-shaped metal bar. The bar is placed behind the thighs, pulling along the skiers as they remain standing on their skis (hopefully!). There’s also a J-bar, a similar device, but with each J-shaped bar used by one skier at a time.

14. “Live Free __”: New Hampshire motto OR DIE
“Live Free or Die” is the motto of the state of New Hampshire. The phrase originated with General John Stark, a native of New Hampshire who served in the Revolutionary War. Stark had to miss a reunion celebration in 1809 due to poor health, and instead sent a letter with his toast “Live free or die: Death is not the worst of evils.”

17. RATS PIED PIPER’S TRAIL
The legend of the Pied Piper of Hamelin dates back to medieval times. Recently there have been suggestions that the story is rooted in some truth, that the town of Hamelin did in fact lose many of its children, perhaps to plague. The suggestion is that the tale is an allegory.

20. “Friendly skies” co. UAL
United Airlines used the tagline “Fly the Friendly Skies” in its marketing materials from 1965 to 1996. It was then replaced with “It’s time to fly”. United chose George Gershwin’s “Rhapsody in Blue” as the company’s theme music in 1976, and paid the Gershwin estate a fee of $500,000 for the privilege.

21. Garr of “Mr. Mom” TERI
The lovely Teri Garr had a whole host of minor roles in her youth, including appearances in nine Elvis movies. Garr’s big break came with the role of Inga in “Young Frankenstein”, and her supporting role in “Tootsie” earned Garr an Academy Award nomination. Sadly, Teri Garr suffers from multiple sclerosis. She is a National Ambassador for the National Multiple Sclerosis Society.

“Mr. Mom” is a 1983 comedy written by John Hughes, starring Michael Keaton and the great Teri Garr. The movie is all about an engineer in the auto industry in Detroit who loses his job and then takes over the running of the household while his wife heads back to work. It’s funny stuff …

28. One of the Seven Sisters schools VASSAR
Vassar College in Poughkeepsie, New York is now a co-educational school after over a century as a women’s college since its founding in 1861. The school was officially declared co-ed in 1969, although it had accepted a handful of male students on the GI Bill after WWII.

The Seven Sisters are a group of (traditionally women’s) colleges in the northeast of the country. The seven are:

32. Joe’s sister in TV’s “Under the Dome” ANGIE
“Under the Dome” is a sci-fi show that is based on a novel of the same name by Stephen King. The storyline involves a small town in Maine that is inexplicably covered with a transparent indestructible dome that cuts the inhabitants off from the rest of the world. It’s an intriguing concept for a novel/show, but I’m not a big fan of Stephen King …

35. Salinger girl ESME
J. D. Salinger wrote a short story called “For Esme – with Love and Squalor”, originally published in “The New Yorker” in 1950. It is a story about a young English girl called Esme and an American soldier, and is set in WWII.

J. D. Salinger was a very reclusive author, most famous for his novel “Catcher in the Rye”. Salinger fought in WWII after he was drafted into the US Army. He saw action on Utah Beach on D-Day, and in the Battle of the Bulge. He also spent a lot of time interrogating prisoners due to his knowledge of French and German, and he was one of the first Americans to go into a liberated concentration camp. He later spent time in hospital suffering from what was then called combat stress reaction, as he tried to deal with what he saw in the German camps.

44. Hurdle for a storied cow MOON
The nursery rhyme “Hey Diddle Diddle” has been around at least since the mid-1700s.

Hey diddle diddle,
The cat and the fiddle,
The cow jumped over the moon,
The little dog laughed to see such fun,
And the dish ran away with the spoon.

57. Setting for “Beasts of the Southern Wild” BAYOU
The exact origins of the word “bayou” is uncertain, but it is thought perhaps to come from the Choctaw (a Native American people from the southeast) word “bayuk”, meaning “small stream”.

“Beasts of the Southern Wild” is a 2012 fantasy film centered on a courageous 6-year-old girl in a Louisiana bayou community. The film garnered very positive reviews on its release and was nominated for four Oscars. The lead character was played by child actress Quvenzhané Wallis. At 9-years-old, Wallis became the youngest person ever to be nominated for a Best Actress Oscar.

61. Seasonal drink NOG
It’s not really clear where the term “nog” comes from although it might derive from the word “noggin”, which was originally a small wooden cup that was long associated with alcoholic drinks.

67. Time fraction: Abbr. NSEC
“Nanosecond” is more correctly abbreviated to “ns”, and really is a tiny amount of time … one billionth of a second.

68. “Bad, Bad Leroy Brown” singer CROCE
Jim Croce’s most successful songs were “Bad. Bad Leroy Brown” and “Time in a Bottle”. Like so many great singers it seems, Croce died in a plane crash. He was killed along with five others just after takeoff when the small commercial plane in which he was travelling hit a tree, possibly because the pilot had a heart attack. Croce died just a few days before the release of his latest album, “I Got a Name”.

69. Computerized city people SIMS
“SimCity” is a very clever computer game. Players build and grow cities and societies by creating the conditions necessary for people (the Sims) to move in and thrive. “SimCity” was launched in 1989, and to this day it is consistently ranked as one of the greatest computer games of all time.

70. Former “Entertainment Tonight” co-anchor TESH
John Tesh is a pianist and composer, as well as a radio and television presenter. For many years Tesh presented the show “Entertainment Tonight”. For “ET” he once covered the filming of an episode of “Star Trek: The Next Generation”. As part of the piece, he volunteered to act as a Klingon warrior and so if you see the “Star Trek: TNG” episode called “The Icarus Factor” in reruns, watch out for John Tesh engaging in ritual torture with Mr. Worf as his victim.

71. Ecclesiastical council SYNOD
The word synod comes from the Greek word for assembly, or meeting. A synod is a church council, usually in the Christian faith.

6. Plains home TEPEE
A tepee (also written as “tipi” and “teepee”) is a cone-shaped tent traditionally made from animal hides that is used by the Great Plains Native Americans. A wigwam is a completely different structure and is often a misnomer for a tepee. A wigwam is a domed structure built by Native Americans in the West and Southwest, intended to be a more permanent dwelling. The wigwam can also be covered with hides but more often was covered with grass, reeds, brush or cloth.

8. Classical Greek style DORIC
The Doric was one of the three classical orders of architecture, the others being the Ionic and the Corinthian.

11. Boyfriend BEAU
A “beau” is the boyfriend of a “belle”, a young lady. Both terms were imported into English from French.

19. Banks in fashion TYRA
Tyra Banks is a tremendously successful model and businesswoman. Banks created and hosts the hit show “America’s Next Top Model “, and also has her own talk show. She was also the first African American woman to make the cover of the “Sports Illustrated” swimsuit issue.

34. Hard-to-see pest GNAT
Gnats are attracted to the smell of rotting food, and to vinegar. Simple homemade traps that use vinegar are often constructed to attract and kill gnats.

35. WWII command ETO
General Dwight D. Eisenhower (DDE) was in command of the European Theater of Operations (ETO) during WWII. If you’re a WWII buff like me, then I recommend you take a look at a great, made-for-TV movie starring Tom Selleck as Eisenhower called “Ike: Countdown to D-Day” that came out in 2004.

36. “Dexter” network, in listings SHO
“Dexter” is a crime show that airs on Showtime. The title character works for the Miami Police Department as an expert in blood spatter patterns by day, but is a serial killer by night. The original series was based on the “Dexter” novels written by Jeff Lindsay. I haven’t seen this show myself, but my eldest son really enjoys it …

37. Word with best or common MAN
The term “best man” is Scottish in origin and has been used in English since the early 1800s when it replaced “groomsman”.

42. Logician’s “E,” perhaps ERAT
QED is used at the end of a mathematical proof or a philosophical argument. The QED acronym stands for the Latin “quod erat demonstrandum” meaning “that which was to be demonstrated”.

49. Chianti, in Chianti VINO
Chianti is a red wine from the Chianti region of central Tuscany in Italy. Historically, Chianti was stored in a characteristically bulbous bottle wrapped in a straw basket. However, the pragmatists have won the day and regular wine bottles tend to be used nowadays.

52. “Eight Is Enough” actor Willie AAMES
Willie Aames is an actor from Newport Beach, California. Aames is best known for playing Tommy Bradford on the TV comedy “Eight is Enough” that originally aired in the seventies.

55. “But wait! There’s more!” company RONCO
Ron Popeil is an inventor who is well known for appearing in infomercials for his own products. One of the more famous infomercials is for his Showtime Rotisserie, which he touts with the phrase “Set it, and forget it!”. Popeil’s company is called Ronco. Popeil also made popular the phrase “But wait, there’s more!”

58. Healthy berry ACAI
Açaí is a palm tree native to Central and South America. The fruit has become very popular in recent years and its juice is a very fashionable addition to juice mixes and smoothies.

59. Cowpoke’s polite assent YES’M
Cowpoke is a term used nowadays for any cowboy, but it was originally limited to the cowboys who prodded cattle onto railroad cars using long poles.

63. Tolkien’s talking tree ENT
Ents are those tree-like creatures that live in J. R. R. Tolkien’s Middle-earth in his series of books “The Lord of the Rings”. “Ent” is an Old English word for “giant”.

64. IBM hardware PCS
IBM was founded as the Tabulating Machine Company in 1896. The company changed its name to the Computing Tabulating Recording Corporation (CTR) in 1911 and was listed on the New York Stock Exchange in 1916. The name of International Business Machines (IBM) was given first to the company’s Canadian subsidiary, and then its South American subsidiary. In 1924, it was decided to adopt the International Business Machines name for the whole company. Good choice …