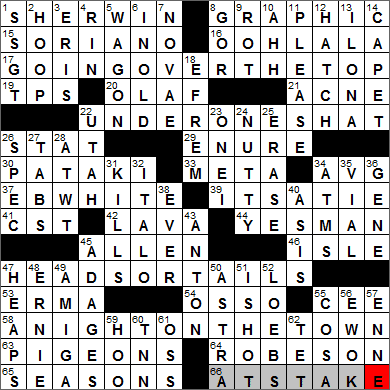 CROSSWORD SETTER: Matt Skoczen
THEME: A Night on the Town … the last words in today’s themed answers point us to clothing needed for A NIGHT ON THE TOWN, namely TOP HAT, WHITE TIE & TAILS:

58A. Celebration suggested by words that end answers to starred clues A NIGHT ON THE TOWN

Today’s Wiki-est, Amazonian Googlies
Across
1. Williams’ partner in paint SHERWIN
The Sherwin-Williams Company is a big producer of paints, as well as related products for the construction industry. The company was founded by Henry Sherwin and Edward Williams in Cleveland, Ohio in 1866.

19. Decorates on mischief night, briefly TPS
TPing (toilet papering) is a prank involving the covering of some object or location with rolls and rolls of toilet paper. If you live in Texas or Minnesota that little “prank” is legal, but if you live here in California, TPing is classed as mischief or vandalism.

20. Norwegian saint OLAF
Of the many kings of Norway named Olaf/Olav (and there have been five), Olaf II is perhaps the most celebrated as he was canonized and made patron saint of the country. Olaf II was king from 1015 to 1028 and was known as “Olaf the Big” (or Olaf the Fat) during his reign. Today he is more commonly referred to as “Olaf the Holy”. After Olaf died he was given the title of Rex Perpetuus Norvegiae, which is Latin for “Norway’s Eternal King”.

26. MD’s “Pronto!” STAT
The exact etymology of “stat”, a term meaning “immediately” in the medical profession, seems to have been lost in the mists of time. It probably comes from the Latin “statim” meaning “to a standstill, immediately”. A blog reader has helpfully suggested that the term may also come from the world of laboratory analysis, where the acronym STAT stands for “short turnaround time”.

29. Habituate ENURE
“Enure” is a variant spelling of “inure”, meaning to harden oneself against the effects of, to accustom oneself to.

30. New York governor before Spitzer PATAKI
George Pataki is a member of the Republican Party who served as Governor of New York from 1995 to 2006. I happen to know that Pataki’s maternal grandmother is from a village close to where I lived in Ireland. When Pataki was first running for Governor, I met someone in Ireland who was researching Pataki’s Irish roots for him. My guess is that the Irish vote is important in New York State …

33. Prefix with tarsal META-
The metatarsal bones are five long bones in each foot located between the heel and the toes. Apparently soccer players are particularly vulnerable to fractures of the metatarsal bones.

41. OK hours CST
The State of Oklahoma (OK) spends much of the year on Central Standard Time (CST).

45. “Blue Jasmine” director ALLEN
The 2013 comedy-drama “Blue Jasmine” was written and directed by Woody Allen, and stars Australian actress Cate Blanchett. The film’s storyline has been compared to that of the Tennessee Williams play “A Streetcar Named Desire”. My wife saw this one, and she said it was quite dark, but enjoyable. I didn’t see it as i am not much of a Woody Allen fan …

64. “Show Boat” (1936) standout ROBESON
Paul Robeson was a concert singer with a remarkable voice, most famous perhaps for his moving rendition of the song “Ol’ Man River” from “Showboat”. Offstage, Robeson gained a lot of notoriety for his political views, which won his the Stalin Peace Prize (the USSR’s equivalent to the Nobel Peace Prize). Those same views got him blacklisted during the Cold War at home in the US.

“Show Boat” is a musical by Jerome Kern and Oscar Hammerstein, first staged in New York in 1927. It is based on a 1926 novel of the same name by Edna Ferber. The story is about a show boat called the “Cotton Blossom”. Show boats were floating theaters which navigated the rivers of the US from the 1870s to the 1930s, moving from town to town with the performers living on board. “Show Boat” was famously adapted for the big screen in 1936, with stars Irene Dunne, Allan Jones and Paul Robeson.

4. Dog star’s first name? RIN
The original Rin Tin Tin was an actual dog, a puppy discovered by a GI in a bombed-out kennel in France during WWI. The soldier named the pup Rin Tin Tin, the same name as a puppet given to American soldiers for luck. On returning to the US, “Rinty” was trained by his owner and was spotted doing tricks by a film producer. Rinty featured in some films, eventually getting his first starring role in 1923 in the silent movie “Where the North Begins”. Legend has it that this first Rin Tin Tin died in the arms of actress Jean Harlow. Not a bad way to go …

6. “__ Chicago”: 1937 Tyrone Power film IN OLD
The 1937 film “In Old Chicago” gives a fictional account of the Great Chicago Fire of 1871. The movie’s stars are Tyrone Power and Alice Faye, with Alice Brady playing the famous “Mrs. O’Leary” whose cow was said to have started the fire.

Tyrone Power was of course noted for his Hollywood film performances, but he also loved to work on the stage. Power was also one of the higher-profile actors who served in the military in WWII. He was a pilot in the Marine Corps. and saw action in the Pacific War.

7. Exploding stars NOVAE
A nova is basically a star that suddenly gets much brighter, gradually returning to its original state weeks or even years later. The increased brightness of a nova is due to increased nuclear activity causing the star to pick up extra hydrogen from a neighboring celestial body. A supernova is very different from a nova. A supernova is a very bright burst of light and energy created when most of the material in a star explodes. The bright burst of a supernova is very short-lived compared to the sustained brightness of a nova.

8. Brit’s oath GOR!
“Gor” is a euphemism for “God” that is used in some British oaths.

9. Balderdash ROT
“Balderdash” means a senseless jumble of words, and was originally (back before the late 1600s) a jumbled mix of liquids, like maybe beer and wine, or even beer and milk!.

13. Actress Massey ILONA
Ilona Massey was a Hollywood actress, a native of Budapest in Hungary. Given her cultural background and the period at which she hit the big screen, Massey was marketed by the studios as “the new Dietrich”.

14. French royal name of yore CAPET
The House of Capet rules France from 987 to 1328. The French throne passed to the house of Valois when Charles IV failed to produce a male heir.

25. Use a Pink Pearl ERASE
Pink Pearl is a brandname of eraser that is produced by the Paper Mate division of Newell Rubbermaid.

40. Surplus store caveat AS IS
A caveat is a warning or a qualification. “Caveat” is the Latin for “let him beware”.

43. “Three Sisters” playwright Chekhov ANTON
Anton Chekhov was a Russian writer of short stories and a playwright, as well as a physician. Chekhov wrote four classic plays that are often performed all around the world, namely “The Seagull”, “Uncle Vanya”, “Three Sisters” and “The Cherry Orchard”. While Chekhov was advancing his writing career, he continued to practice medicine. He is quoted as saying “Medicine is my lawful wife, and literature is my mistress.”

The title characters in Anton Chekhov’s play “Three Sisters” were inspired by the three Brontë sisters, the English authors.

47. Jalopies HEAPS
The origins of our word “jalopy” meaning “dilapidated old motor car” seem to have been lost in time, but the word has been around since the 1920s. One credible suggestion is that it comes from Jalapa, Mexico as the Jalapa scrap yards were the destination for many discarded American automobiles.

55. Toledo thing COSA
Toledo is a city in central Spain.

56. “Star Wars” creature EWOK
The Ewoks are creatures who live on the moon of Endor, first appearing in “Star Wars Episode VI: Return of the Jedi”. They’re the cute and cuddly little guys that look like teddy bears.

60. Old Opry network TNN
The Nashville Network (TNN) was a country music cable channel that operated from 1983 to 2003. When TNN closed down it was relaunched with a completely different format as Spike, marketed as “the first television channel for men”.

61. 1942 FDR creation OSS
The Office of Strategic Services (OSS) was formed during WWII in order to carry out espionage behind enemy lines. A few years after the end of the war the OSS functions were taken up by a new group, the Central Intelligence Agency that was chartered by the National Security Act of 1947.