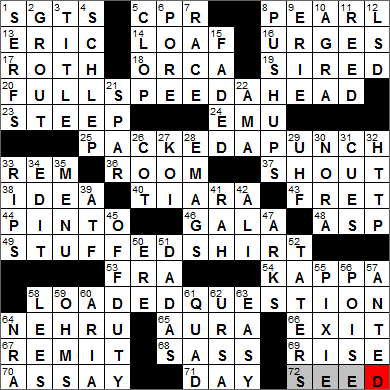 CROSSWORD SETTER: David W. Cromer
THEME: Crowded in Answers … each of today’s themed answers start with a synonym of the word CROWDED:

20A. Exhortation to the engine room FULL SPEED AHEAD
25A. Had some wallop PACKED A PUNCH
49A. Self-important sort STUFFED SHIRT
58A. Interviewer’s booby trap LOADED QUESTION

8. “Cultured” gem PEARL
The strong iridescent material laid down by some mollusks on the inside of their shells is called “nacre”, and nacre is also the material that makes up pearls. The creature lays down nacre as a defensive mechanism, protecting the soft tissue of its body from the rough surface of the outer shell. Similarly, it uses nacre to encapsulate harmful debris or a parasite that penetrates the shell, and that’s how a pearl is formed. Cultured pearls are made by inserting a tissue graft from a donor oyster, around which nacre is laid down.

13. Spy novelist Ambler ERIC
Eric Ambler was a British author of spy novels, an author that I read voraciously for relaxation as I worked my way through college. One of his books was “The Light of Day”, which provided inspiration for the comic movie adaption called “The Pink Panther”. Ambler also wrote the screenplay for the excellent film “A Night to Remember” which told the story of the fateful maiden voyage of the RMS Titanic.

18. SeaWorld attraction ORCA
The taxonomic name for the killer whale is Orcinus orca. The use of the name “orca”, rather than “killer whale”, is becoming more and more common. The Latin word “Orcinus” means “belonging to Orcus”, with Orcus being the name for the Kingdom of the Dead.

SeaWorld was started in San Diego in 1964. The original plan was build an underwater restaurant with a marine life show. Eventually the founders dropped the idea of the eating establishment and just went with a theme park.

24. Down Under runner EMU
Emu eggs are very large, with a thick shell that is dark-green in color. One emu egg weighs about the same as a dozen chicken eggs.

33. Dreamer’s acronym REM
REM is an acronym standing for Rapid Eye Movement sleep. REM sleep takes up 20-25% of the sleeping hours and is the period associated with one’s most vivid dreams.

44. Ford of the ’70s PINTO
The Pinto is a small car that was made by the Ford company from 1971 to 1980. The Pinto was of course named for the type of horse. Allegations were made in 1997 that the neck of the car’s fuel tank could easily break off in a collision leading to a deadly fire. However, the allegations were never really shown to be valid.

48. Cause of Cleopatra’s undoing ASP
The asp is a venomous snake found in the Nile region of Africa. It is so venomous that the asp was used in ancient Egypt and Greece as a means of execution. Cleopatra observed such executions noting that the venom brought on sleepiness without any painful spasms. When the great queen opted to commit suicide, the asp was therefore her chosen method.

53. Brother in a monastery FRA
The title “Fra” (brother) is used by Italian monks.

54. Phi Beta __ KAPPA
Phi Beta Kappa was the first collegiate Greek fraternity in the US, founded in 1776 at the College of William and Mary. The initials Phi Beta Kappa stand for “philosophia biou kybernētēs”, which translates into “philosophy is the guide of life”. The symbol of the Phi Beta Kappa Society is a golden key.

64. Kind of jacket named for an Indian leader NEHRU
A Nehru jacket is very like a regular suit jacket, except that the collar buttons at the neck. It was originally created in the 1940s in India, and then marketed as the Nehru jacket in the west in the sixties. The name Nehru was lifted from Jawaharlal Nehru, the prime minister of India from 1947 to 1964.

71. Doris who sang “Que Sera, Sera” DAY
The actress and singer Doris Day was born Doris Kappelhoff in Cincinnati, Ohio. Day made more than 650 recordings as a singer with Columbia Records, and also appeared in 39 movies. Outside the world of entertainment, she has been an ardent supporter of animal rights. She now lives in Carmel-by-the-Sea in California, along with her many pets and stray animals that she has adopted over the years.

As Doris Day told us, “que sera sera” is Spanish for “whatever will be, will be”. Day performed the Oscar-winning song in Alfred Hitchcock’s 1956 version of the movie “The Man Who Knew Too Much”.

72. Burpee product SEED
The Burpees Seeds company was formed in 1876 by Washington Atlee Burpee (what a name!).

Down
1. Feudal workers SERFS
A serf was a member of the lowest feudal class, someone attached to land owned by a lord. “Serf” comes from the Latin “servus”, meaning “slave”.

2. Tile installer’s need GROUT
Grout is a thin mortar used to fill the joints between ceramic tiles. The name “grout” comes from the Old English word “gruta”, the word for a “coarse porridge” (due to the similarity in appearance of the two). Interestingly, the word “grits” comes from the same root. Grout … grits … makes sense …

3. Information on a book’s spine TITLE
In the US, the convention is to write the title on the spine of a book from top-to-bottom. In most of Europe, the convention is to write the title from bottom-to-top. We have a lot of books in the “library” in our house from both sides of the Atlantic, and so there is a lot of moving of the head from left to right as we glance along our bookshelves.

4. Carry with effort SCHLEP
Our word “schlep” means “to carry, drag”. As one might expect, “schlep” comes from Yiddish, with “shlepen” having the same meaning.

9. Southernmost Great Lake ERIE
Lake Erie is the fourth largest of the five Great Lakes (Lake Ontario is the smallest). The lake takes its name from the Erie tribe of Native Americans that used to live along its southern shore. Erie is the shallowest of the Great Lakes, something for which nearby residents must be quite grateful. Being relatively shallow, much of Erie freezes over part way through most winters putting an end to most of the lake effect snow that falls in the snow belt extending from the lake’s edge.

11. Clarinetist’s need REED
The clarinet is a lovely-sounding instrument, isn’t it? The name comes from the Italian word “clarino” meaning “trumpet” with the “-et” suffix indicating “small”.

12. Drug “dropped” in the ’60s LSD
LSD (colloquially known as “acid”) is short for lysergic acid diethylamide. A Swiss chemist called Albert Hofmann first synthesized LSD in 1938 in a research project looking for medically efficacious ergot alkaloids. It wasn’t until some five years later when Hofmann ingested some of the drug accidentally that its psychedelic properties were discovered. Trippy, man …

28. Some Kindle reading, briefly E-MAGS
I finally bought myself a Kindle Fire HD a couple of weeks ago. I’ve started reading e-books for the first time in my life. I’ve always been behind the times …

42. Baba of folklore ALI
There is some controversy about the story “Ali Baba and the Forty Thieves” in that it has been suggested it was not part of the original collection of Arabic tales called “One Thousand and One Nights”. The suggestion is that the Ali Baba tale was added by one of its European translators.

52. Spuds TATERS
The word “spud” is used as a slang term for a potato and was first recorded in the mid-1800s, in New Zealand would you believe?

58. Popular jeans LEES
The Lee company famous for making jeans was formed in 1889, by one Henry David Lee in Salina, Kansas.

59. Units of resistance OHMS
The unit of electrical resistance is the ohm (with the symbol omega) named after German physicist Georg Simon Ohm. Ohm was the guy who established experimentally that the amount of current flowing through a circuit is directly proportional to the voltage applied, (V=IR) a relationship that every school kid knows as Ohm’s Law.

62. __ Minor: constellation URSA
Ursa Minor sits right beside the constellation Draco (Latin for “dragon”). Ursa Minor used to be considered the wing of Draco, and so was once called “Dragon’s Wing”.