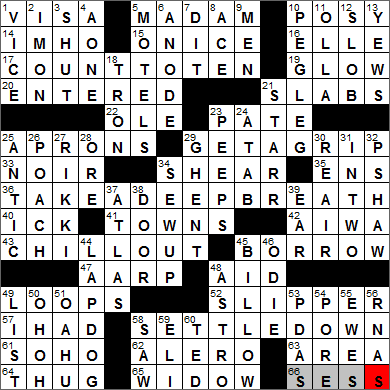 CROSSWORD SETTER: Marti DuGuay-Carpenter
THEME: Stay Cool! … today’s themed answers are phrases meaning “stay cool!” that might be appropriate to people engaged in certain activities, as mentioned in each clue:

Today’s Wiki-est, Amazonian Googlies
Across
1. Credit card choice VISA
Did you know that Visa doesn’t issue any credit cards? Visa just sells the electronic systems and infrastructure to banks who then put the Visa logo on their own cards so that both the customer and merchant know to use the VISA system when making a transaction.

10. Nosegay POSY
A nosegay is a posy, a bouquet of flowers. As one might expect, a nosegay is designed to make the nose gay and joyous with the aroma of fresh cut flowers.

14. Blogger’s “That’s what I think” IMHO
In my humble opinion (IMHO)

16. Vogue rival ELLE
“Elle” magazine was founded in 1945 in France and today has the highest circulation of any fashion magazine in the world. “Elle” is the French word for “she”.

“Vogue” magazine has been published an awfully long time, with the first issue appearing in 1892. Over the decades the magazine has picked up a lot of criticism as well as its many fans. Famously, an assistant to the editor wrote a novel based on her experiences working with the magazine’s editor, and called it “The Devil Wears Prada”.

23. Hors d’oeuvres liver spread PATE
Pâté is a rich spreadable paste made up of a mixture of ground meat and fat, to which various vegetables, herbs and spices may be added. The most famous version is pâté de foie gras, made from the fattened livers of geese (“foie gras” means “fat liver” in French).

33. Pinot __: red wine NOIR
The Pinot noir wine grape variety takes its name from the French for “pine” and “black”. The grapes grow in tight clusters shaped like pine cones, and are very dark in color. The Pinot noir grape is most closely associated with Burgundy wines in France, although in recent years the popularity (and price) of California Pinot noir wine has soared after it featured so prominently in the wonderful, wonderful 2004 movie “Sideways”. Grab a bottle of Pinot, and go rent the DVD…

35. Half of the word “inning” ENS
Three of the six letters in the wording “inning” are letters N.

41. Whistlestop places TOWNS
Originally a “whistle stop” was a station at which a train would only stop if signalled to do so by a passenger. The passenger would notify the conductor of the need for the stop, then the conductor notified the engineer by pulling a signal cord. The engineer acknowledged the conductor’s signal by sounding the train’s whistle twice. The term was applied to a fast-moving political campaign soon after WWII. President Truman’s extensive railway trip during the 1948 campaign was labeled a “whistle-stop tour”.

47. Senior advocacy gp. AARP
AARP is now the official name for the interest group that used to be called the American Association of Retired Persons. The name change reflects the current focus of the group on all Americans aged 50 or over, as opposed to just people who have retired. The AARP has two affiliated organizations. The AARP Foundation is a charitable arm that helps older people who are in need. AARP Services sells services such as insurance and advertising in AARP publications. In 2008, AARP services made over $650 million selling insurance, and about $120 million from selling advertising space in AARP publications.

57. “If __ a Hammer” I HAD
“If I Had a Hammer” is a song written in 1949 by Pete Seeger and Lee Hays. The song has been released by many artists, but my guess would be that the most famous recording was by Peter, Paul and Mary in 1962.

58. Realtor’s “Stay cool!”? SETTLE DOWN!
Some helpful blog readers have educated me on the term “Realtor” and have pointed out why the word is capitalized. “Real estate agent” is a general, generic term. “Realtor” is the name given to a member of the trade association known as the National Association of Realtors (NAR). The NAR has gone so far as the trademark the term “Realtor” in the US.

61. Arty NYC section SOHO
The Manhattan neighborhood known today as SoHo was very fashionable in the early 1900s, but as the well-heeled started to move uptown the area became very run down and poorly maintained. Noted for the number of fires that erupted in derelict buildings, SoHo earned the nickname “Hell’s Hundred Acres”. The area was then zoned for manufacturing and became home to many sweatshops. In the mid-1900s artists started to move into open loft spaces and renovating old buildings as the lofts were ideal locations in which an artist could both live and work. In 1968, artists and others organized themselves so that they could legalize their residential use of an area zoned for manufacturing. The group they formed took its name from the name given to the area by the city’s Planning Commission i.e “South of Houston”. This was shortened from So-uth of Ho-uston to SoHo as in the SoHo Artists Association, and the name stuck.

64. Ruffian THUG
The handheld weapon known as a garrote (or garotte) was in particular used by murderers and robbers harassing travelers in India. These felons were known locally as “thuggees” (from the Hindi word for “thief”). This gave us our contemporary word “thug”, meaning a brute.

65. Black __ spider WIDOW
“Widow spider” is a common name given to several species of spider in the genus Latrodectus. The name comes from the reported behavior of the female eating the male after the pair have mated. The female wins the battle with the male largely because the female’s venom is three-times as potent as that of the male. The most notorious widow spider is the “black widow”. The female black widow’s venom glands are unusually large and the bite can be quite harmful to humans.

66. Legis. meeting SESS
A legislative (legis.) meeting might be called a session (sess.).

Down
1. ’80s TV’s “Miami __” VICE
“Miami Vice” is a detective television show that first aired in 1984-1989. Stars of the show are Don Johnson and Philip Michael Thomas. There is a 2006 film adaptation of “Miami Vice” that stars Colin Farrell and Jamie Foxx.

7. Morse code character DIT
Dahs and dits are the sound equivalents of dashes and dots of Morse Code. Samuel Morse didn’t invent Morse code, but it took his name because it was invented for use on the electric telegraph invented by him.

10. Limb for Ahab PEGLEG
In Herman Melville’s novel “Moby-Dickl or, The Whale” (to give the book it’s full title), Captain Ahab is driven to kill Moby Dick as the whale had bitten off Ahab’s leg in a previous encounter. Ahab desperately wanted revenge.

11. Spanish stewpot OLLA
An olla is a traditional clay pot used for the making of stews. The olla is particularly associated with Spain and the American Southwest, where Spanish settlers gave the Spanish name to a similar pot that was made locally. “Olla” was the Latin word used to describe an Ancient Roman stew pot.

13. Conifers with pliable wood YEWS
Yew is the wood of choice for the longbow, a valued weapon in the history of England. The longbow is constructed with a core of yew heartwood (as the heartwood resists compression) that has a sheath of yew sapwood (as the sapwood resists stretching). The yew was in such demand for longbows that for centuries yew trees were in short supply in Britain and the wood had to be imported from all over Europe.

18. 1982 Disney sci-fi flick TRON
Released in 1982, “Tron” was one of the first mainstream films to make extensive use of computer graphics. The main role in the movie is played by Jeff Bridges.

21. Drummer Ringo STARR
Ringo Starr’s real name is Richard Starkey. Before he joined the Beatles (replacing drummer Pete Best), Starkey played with the Raving Texans. It was with the Raving Texans that he adopted the name “Ringo Starr”, because he wore a lot of rings and he thought it sounded “cowboyish”. Back then his drum solos were billed as “Starr Time”.

27. Kipling’s “__-Tikki-Tavi” RIKKI
In Rudyard Kipling’s “The Jungle Book”, one of the short stories is titled “Rikki-Tikki-Tavi”, the story about a mongoose, the brave pet of an English family that protects them from a succession of snakes.

29. Treaty of __: War of 1812 ender GHENT
Ghent is a city in the Flemish region of Belgium. The War of 1812 (between Britain and the US) was formally concluded with the signing of the Treaty of Ghent. The American negotiating team in Ghent included Henry Clay and John Quincy Adams.

37. Sky holder of myth ATLAS
In Greek mythology, Atlas was a Titan who was tasked with holding up the celestial sphere on his shoulders. The Greeks observed the planets moving and the stars in fixed positions. They believed that the stars were on the surface of a single starry sphere, the celestial sphere that was supported by Atlas.

46. “Garfield” pooch ODIE
Odie is Garfield’s best friend and is a slobbery beagle, a character in Jim Davis’s comic strip.

48. Houston baseballer ASTRO
The Houston baseball team changed its name to the Astros from the Colt .45s in 1965 when they started playing in the Astrodome. The Astrodome was so called in recognition of the city’s long association with the US space program.

56. Genetic messengers RNAS
Ribonucleic Acid (RNA) is an essential catalyst in the manufacture of proteins in the body. The genetic code in DNA determines the sequence of amino acids that make up each protein. That sequence is read in DNA by messenger RNA, and amino acids are delivered for protein manufacture in the correct sequence by what is called transfer RNA. The amino acids are then formed into proteins by ribosomal RNA.

59. Yalie ELI
Elihu Yale was a wealthy merchant born in Boston in 1649. Yale worked for the British East India Company, and for many years served as governor of a settlement at Madras (now Chennai) in India. After India, Yale took over his father’s estate near Wrexham in Wales. It was while resident in Wrexham that Yale responded to a request for financial support for the Collegiate School of Connecticut in 1701. He sent the school a donation, which was used to erect a new building in New Haven that was named “Yale” in his honor. In 1718, the whole school was renamed to “Yale College”. To this day, students of Yale are nicknamed “Elis”, again honoring Elihu.

60. Turner of broadcasting TED
Ted Turner’s big initiative in the world of business was the founding of CNN, the first 24-hour cable news channel. Turner never graduated from college as he was expelled from Brown University for having a female student in his dormitory room. Years later, in 1989, Brown awarded him an honorary B.A.