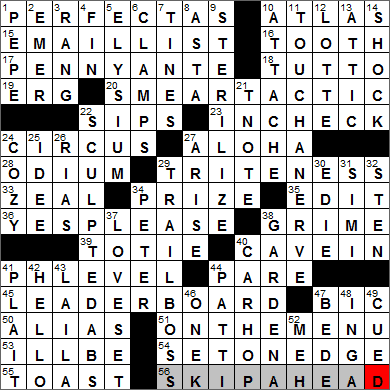 Today’s Wiki-est, Amazonian Googlies
Across
1. Long-odds track bets PERFECTAS
To win a bet called an exacta (also called a “perfecta”), the person betting must name the horses that finish first and second and in the exact order. The related bet called the trifecta requires naming of the first, second and third-place finishers in the right order.

10. Early launch rocket ATLAS
Atlas boosters launched the first four US astronauts into space. The Atlas rocket design was originally developed in the late fifties and was deployed for several years as it was intended, as an intercontinental ballistic missile.

17. Small-time PENNY ANTE
Penny Ante poker is a game in which bets are limited to a penny, or some other small, friendly sum. The expression “penny ante” has come to mean any business transaction that is on a small scale.

18. All, in Assisi TUTTO
“Tutti” (singular “tutto”) are pieces of music performed by all the artists in a group, as opposed to “soli” (singular “solo”). “Tutto” is the Italian for “all”.

The Italian town of Assisi is in Umbria. Assisi is famous as the birthplace of St. Francis and as the home to the Franciscan religious order. It was also the home to Saint Clare and her order of the Poor Sisters (later known as the Poor Clares).

19. Piece of work ERG
An erg is a unit of energy or mechanical work. “Erg” comes from the Greek word “ergon” meaning “work”. A dyne is a unit of force. The name “dyne” comes from the Greek “dynamis” meaning “power, force”. Ergs and dynes are related to each other in that one erg is the amount of energy needed to move a force of one dyne over a distance of one centimeter.

28. Bad blood ODIUM
“Odium” is a strong dislike or aversion. The term is Latin in origin and relates to the Latin word “odi” meaning “I hate”.

39. Comedian Fields TOTIE
Totie Fields was the stage name of comedienne Sophie Feldman. “Totie” is a corruption of “Sophie” and was the nickname she was given as a child.

41. Soil test measure PH LEVEL
As we all recall from chemistry class, a pH of 7 is considered neutral, and water is the primary example of a substance with a pH equal to seven. Anything less than 7 is an acid, and anything above 7 is a base.

47. Cristal maker BIC
Société Bic is a French company, based in Clichy in France. The first product the company produced, more than fifty years ago, was the Bic Cristal ballpoint pen that is still produced today. Bic also makes other disposable products such as lighters and razors.

50. “__ Smith and Jones”: ’70s TV Western ALIAS
“Alias Smith and Jones” is a Western television series that first aired from 1971 to 1973. The entertaining show has a definite “Butch Cassidy and the Sundance Kid” feel about it, and indeed “Alias Smith and Jones” was inspired by the 1969 movie hit that starred Paul Newman and Robert Redford. Stars of the television show are Pete Duel as Hannibal Heyes and Ben Murphy as Kid Curry. The show’s title comes from a line in movie. Prior to going in to rob a bank in Bolivia, Sundance turns to Butch and says, “I’m Smith and you’re Jones”.

Down
1. Latino Muppet prawn PEPE
Pepe the King Prawn is a character on the show “Muppets Tonight”. Pepe is part of a vaudeville double act with his partner Seymour the Elephant.

4. “Jaws” omen FIN
“Jaws” is a thrilling 1975 movie directed by Steven Spielberg that is based on a novel of the same name by Peter Benchley. The film has a powerful cast, led by Roy Scheider, Richard Dreyfuss and Robert Shaw. “Jaws” was perhaps the first “summer blockbuster” with the highest box office take in history, a record that stood until “Star Wars” was released two years later.

5. Mythological paradise ELYSIUM
In Greek mythology Elysium was part of the Underworld where heroic and virtuous souls were laid to rest. Nowadays we use the word Elysium to mean a place or condition of ideal happiness, a Garden of Eden.

8. Dog star ASTA
Asta is the wonderful little dog in the superb movie “The Thin Man” starring William Powell and Myrna Loy (as Nick and Nora Charles). In the original story by Dashiell Hammett, Asta was a female Schnauzer, but on screen Asta was played by a wire-haired fox terrier called “Skippy”. Skippy was also the dog in “Bringing up Baby” with Cary Grant and Katharine Hepburn, the one who kept stealing the dinosaur bone. Skippy retired in 1939, so Asta was played by other dogs in the remainder of “The Thin Man” films.

10. Diplomacy figure ATTACHE
“Attaché” is a French term which literally means “attached”, and is used for a person who is assigned to the administrative staff of some agency or other service. The term is most recognized as it applies to someone assigned to an Ambassador’s staff at an embassy. The word was extended to “attaché case” at the beginning of the twentieth century, meaning a leather case used for carrying papers, perhaps by an attaché at an embassy.

12. Singer Lenya LOTTE
Lotte Lenya was an Austrian singer and actress. Lenya was married to composer Kurt Weill, and was noted for her performances of his works. Late in her career she played Rosa Klebb, one of the main villains in the 1963 Bond movie “From Russia With Love”. Klebb was the character who had the knife that popped out from the toe of her shoe.

21. Fed. security T-NOTE
A Treasury note (T-Note) is a government debt that matures in 1-10 years. A T-Note has a coupon (interest) payment made every six months. The T-note is purchased at a discount to face value, and at the date of maturity can be redeemed at that face value. A T-Bill is a similar financial vehicle, but it matures in one year or less, and a T-Bond matures in 20-30 years.

22. Bodybuilding goal SCULPTED ABS
The photo at the top of the page is cut off just below the shoulders, otherwise you might get a sense of how sculpted are my abs …

24. Conspiratorial COZY
“Cozy” can be used to mean “deviously close”.

31. __ Valley SIMI
Nowadays Simi Valley, California is perhaps best known as being home to the Ronald Reagan Presidential Library. If you ever get the chance to do so, the library is a great place to visit. There you can tour one of the retired Air Force One planes.

The first Uzi submachine gun was designed in the late 1940s by Major Uziel Gal of the Israel Defense Forces who gave his name to the gun.

34. Actor Gallagher PETER
The actor Peter Gallagher is currently playing CIA Clandestine Services Director Arthur Campbell on the TV drama “Covert Affairs”. I remember Gallagher most as the guy in the coma (“sleeping”) in the Sandra Bullock movie from 1995 “While You Were Sleeping”.

37. Tennis shutout LOVE SET
In tennis the score of zero is designated as “love”. Some people believe that this usage originates from the French “l’oeuf” (meaning “the egg”). The idea is that the written character “0” looks like an egg.

38. Floral-sounding Los Angeles suburb GARDENA
Gardena is a suburb of Los Angeles. Gardena has the distinction of being the city with the highest percentage of Japanese-Americans in the whole of the US. Japanese migrants figured heavily in the development of Gardena’s agrarian economy in the early 1900s.

40. Sonic server CARHOP
Carhops are servers who bring food to customers in their cars at drive-in restaurants. The first carhops were seen at the Pig Stand restaurant in Dallas, Texas in 1921. These male employees would “hop” onto the running board of cars as they entered the restaurant’s parking lot in order to quickly take the customer’s order, hence the name “carhop”.

Sonic Drive-In is a fast-food restaurant chain that is noted for its carhops who serve patrons on roller skates.

43. Former boxer Ali LAILA
Laila Ali is the daughter of the great Muhammad Ali and is a very capable boxer in her own right. Laila is not a bad dancer either, coming in third place in the fourth season of “Dancing with the Stars”.

44. Page of music PATTI
Patti Page is the stage name of Clara Ann Fowler, the best-selling female artist in the 1950s. Patti Page’s signature song is “Tennessee Waltz”, a big hit for her that spent 13 weeks at number one in the charts in 1950. She also had a number one with “(How Much Is That) Doggie in the Window” in 1953.

47. Eliot title character BEDE
“Adam Bede” was the first novel written by the English writer George Eliot (aka Mary Ann Evans). It was published in 1859 and has been in print since then, over 150 years.

George Eliot was the pen name of English novelist Mary Anne Evans. As one might think, Evans chose a male pen name in order that her work might be best appreciated in the Victorian era. Eliot wrote seven novels including “Adam Bede” (1859), “The Mill on the Floss” (1860), “Silas Marner” (1861) and “Middlemarch” (1871-72).

48. “Listen to Your Heart” singer in the musical “Young Frankenstein” INGA
I am not really a big fan of movies made by Mel Brooks, but “Young Frankenstein” is the exception. I think the cast has a lot to do with me liking the film, as it includes Gene Wilder (Dr. Frankenstein), Teri Garr (Inga), Marty Feldman (Igor) and Gene Hackman (Harold, the blind man).

52. “Big deal” MEH
“Meh!” is one of those terms unfamiliar to me outside of crosswords. It is a modern colloquialism meaning “I’m not great, but not bad”.