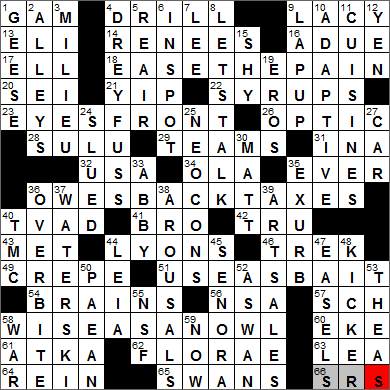 CROSSWORD SETTER: Mark Bickham
THEME: Missing the A’s … today’s themed answers all start with a vowel sound, in alphabetical order including “Y”. But, the “A’s” sound is missing from the list:

53D. MLB team, familiarly (and what’s missing from the sequence found in the answers to starred clues?) THE A’S

Today’s Wiki-est, Amazonian Googlies
Across
1. Moll’s leg GAM
The American slang term “gams” is used for a woman’s legs. The term goes back to the 18th century “gamb” meaning the leg of an animal on a coat of arms.

The slang term “moll” is a used for the female companion of a gangster. “Moll” is short for “Molly”, which is a nickname for “Mary”. In 17th century England a moll was a prostitute.

13. Biblical priest who trained Samuel ELI
In the Bible, Eli is a High Priest of Shiloh, and the teacher of Samuel. As such, his story is told in the Book of Samuel.

14. Zellweger et al. RENEES
Renée Zellweger’s big break came in the 1996 movie “Jerry Maguire”. A few years later she followed that up with a string of successes in “Bridget Jones Diary” (2001), “Chicago” (2002) and “Cold Mountain” (2003). My wife and I love watching her play Bridget Jones, and as someone coming from the British Isles I have to say she does a remarkable job with the accent. She worked hard to perfect that accent, and of course she had a voice coach. She also went “undercover” and worked as a temp in an office for three weeks fine-tuning her skills.

16. Together, in music A DUE
“A due” is a musical term meaning “together”, and literally translates from Italian as “by two”.

26. Type of cranial nerve OPTIC
The optic nerve enters the eyeball at a location on the retina called the optic disc. Because there are no light-sensitive cells at the optic disc, there is a “hole” in our visual field that is called the blind spot. People with normal vision don’t usually notice this blind spot as the brain “fills in” the blind spot with information from the other eye.

28. Role for John Cho in “Star Trek” SULU
John Cho is an actor and musician who was born in Seoul, South Korea but who has lived in the US since he was a young boy. Cho’s break in movies came in playing Harold Lee in the ”Harold & Kumar” films. He is now making a name for himself playing Mr. Sulu in the latest “Star Trek” movies.

29. Jets and others TEAMS
Just like the New York Giants, the New York Jets are based in New Jersey, headquartered in Florham Park. The Jets and the Giants have a unique arrangement in the NFL in that the two teams share Metlife Stadium in East Rutherford, New Jersey. The Jets were an AFL charter team, formed in 1959 as the Titans of New York. The Titans changed their name to the Jets in 1963.

32. Mex. neighbor USA
The US-Mexico border is almost 2,000miles in length. About 350 million people cross it legally every year, making it the most frequently crossed international border in the whole world.

42. Play about Capote TRU
“Tru” was written by Jay Presson Allen and is a play about Truman Capote that premiered in 1989. There is a classic anachronism in the piece. It is set in Capote’s New York City apartment at Christmas 1975. At one point the Capote character talks about suicide, saying that he has enough pills to stage his own Jonestown Massacre. The Jonestown Massacre didn’t happen until three years later, in 1978.

56. Govt. surveillance group NSA
The National Security Agency (NSA) was set up in 1952 by President Truman, a replacement for the Armed Forces Security Agency that had existed in the Department of Defense since 1949. The NSA has always been clouded in secrecy and even the 1952 letter from President Truman that established the agency was kept under wraps from the public for over a generation. I really like the organization’s nickname … “No Such Agency”.

61. Aleutian island ATKA
Atka Island is the largest of the Andreanof Islands, an island group in the Aleutian chain in southwest Alaska. There are about 100 inhabitants on Atka Island, almost all of whom live in the city of Atka.

65. Yeats’ “The Wild __ at Coole” SWANS
Irish poet William Butler Yeats wrote the poem called “The Wild Swans at Coole” while staying at Coole Park in County Galway, Ireland. Coole Park was the estate of Lady Gregory, a close friend of the poet.

AARP is now the official name for the interest group that used to be called the American Association of Retired Persons. The name change reflects the current focus of the group on all Americans aged 50 or over, as opposed to just people who have retired. The AARP has two affiliated organizations. The AARP Foundation is a charitable arm that helps older people who are in need. AARP Services sells services such as insurance and advertising in AARP publications. In 2008, AARP services made over $650 million selling insurance, and about $120 million from selling advertising space in AARP publications.

2. Strike zones? ALLEYS
Bowling has been around for an awfully long time. The oldest known reference to the game is in Egypt, where pins and balls were found in an ancient tomb that is over 5,000 years old. The first form of the game to come to America was nine-pin bowling, which had been very popular in Europe for centuries. In 1841 in Connecticut, nine-pin bowling was banned due to its association with gambling. Supposedly, an additional pin was added to get around the ban, and ten-pin bowling was born.

3. Social setting MILIEU
We use the French word “milieu” to mean an environment, surroundings. In French, “milieu” is the word for “middle”.

4. Mr. Holland portrayer DREYFUSS
The actor Richard Dreyfuss is from New York City, although he grew up in Los Angeles. Dreyfuss got his big break with a lead role in 1973’s “American Graffiti” and then made a name for himself in two Steven Spielberg blockbusters: “Jaws” and “Close Encounters of the Third Kind”. He won the 1978 Best Actor Oscar for his wonderful performance in “The Goodbye Girl”, making him the youngest actor to be so honored at that time (he was 30 years old).

7. Author Harper LEE
Nelle Harper Lee is an author from Monroeville, Alabama. Lee wrote only one novel, “To Kill a Mockingbird”, and yet that contribution to the world of literature was enough to earn her the Presidential Medal of Freedom and a Pulitzer Prize. Harper Lee was a close friend of fellow author Truman Capote who was the inspiration for the character named “Dill” in her novel.

19. Winged god EROS
Eros was the Greek god of love, and the Greek counterpart of the Roman god Cupid.

25. Opponents of the ’60s-’70s New Left NEOCONS
By definition, a neoconservative supports the use of American power and military to bring democracy, liberty, equality and human rights to other countries.

27. Golf, for one CAR
The Volkswagen Rabbit is a small, front-wheel drive car that is sold as the Volkswagen Golf outside of North America.

30. Simpsons creator Groening MATT
Matt Groening is a cartoonist. He created two successful animated shows for television, namely “The Simpsons” and “Futurama” (neither of which I understand!).

33. “Eight Is Enough” wife ABBY
“Eight Is Enough” is a comedy drama that originally ran from 1977 to 1981 on ABC. Star of the show was Dick Van Patten, who played a newspaper columnist and father of eight children. The show was inspired by the real life situation of journalist Tom Braden who wrote a book called “Eight is Enough”. Braden co-hosted CNN’s “Crossfire” for ten years with Pat Buchanan and then Robert Novak.

35. Bedroom community EXURB
Derived from the term “suburb”, an “exurb” is an area beyond the suburbs at the very outskirts of a city. Often “exurb” is used to denote an area inhabited by more wealthy people.

44. “Aren’t you a little short for a Stormtrooper?” speaker LEIA
Princess Leia is Luke Skywalker’s sister in the original “Star Wars” trilogy and was played by Carrie Fisher. Carrie Fisher has stated that she hated the famous “cinnamon bun hairstyle” that she had to wear in the films, as she felt it made her face look too round. She also had to to sit for two hours every day just to get her hair styled. Two hours to get your hair done? It takes me just two seconds …

47. Stands for things EASELS
The word “easel” comes from an old Dutch word meaning “donkey” would you believe? The idea is that an easel carries its load (an oil painting, say) just as a donkey would carry its load.

50. Song of praise PAEAN
A paean is a poem or song that expresses triumph or thanksgiving. “Paean” comes from the ancient Greek “paian” meaning “song of triumph”.

52. Egyptian dam ASWAN
From ancient times right up to 1970, the annual flooding of the Nile was a significant event in Egypt. The flooding allowed the deposition of fertile silt far beyond the banks of the river, helping the region’s agriculture. However, the flooding was unpredictable. So the Aswan Dam was built in the sixties and from 1970 the flooding was brought under control.

53. MLB team, familiarly (and what’s missing from the sequence found in the answers to starred clues?) THE A’S
The Oakland Athletics (usually “the A’s”) baseball franchise was founded back in 1901 as the Philadelphia Athletics. The team became the Kansas City Athletics in 1955 and moved to Oakland in 1968.