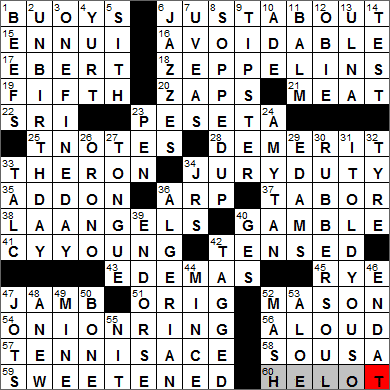 Today’s Wiki-est, Amazonian Googlies
Across
15. Reaction to flatness ENNUI
“Ennui” is the French word for boredom, a word that we now use in English. It’s one of the few French words we’ve imported that we haven’t anglicized and actually pronounce “correctly”.

17. 1975 Pulitzer winner for criticism EBERT
Roger Ebert was a film critic for “The Chicago Sun-Times” for 50 years. He also co-hosted a succession of film review television programs for over 23 years, most famously with Gene Siskel until Siskel passed away in 1999. Ebert was the first film to win the Pulitzer Prize for Criticism, which he did in 1975. He was diagnosed and treated for thyroid cancer in 2002, and finally succumbed to a recurrence of the disease in April 2013.

18. Early German fliers ZEPPELINS
The zeppelin airship was developed by the German Count Ferdinand von Zeppelin, the design of which was granted a US patent in 1899. When zeppelins went into service, they were operated by the company Deutsche Luftschiffahrts-AG (DELAG), making that company the world’s first commercial airline. DELAG was operating commercial flights even before WWI. Famously, that big spire at the top of the Empire State Building was designed to be a docking point for zeppelin airships. However, after several attempts to use it as such, the idea was abandoned as the updrafts coming up from the streets below made docking too hazardous a maneuver.

19. Whiskey purchase FIFTH
A “fifth” is an American unit of volume used for liquor. It used to be equal to one fifth of a US gallon. Since the seventies we’ve been using a “metric fifth” which is equal to 750 mL, the standard size for wine bottles around the world.

22. Sanskrit term of respect SRI
“Sri” is a title of respect for a male in India.

Sanskrit is an Indo-Aryan language and is one of the 22 scheduled languages of India. Sanskrit has a rich tradition and is the language in which many historical and religious texts are written. There aren’t many speakers of the language today although efforts are underway to revive spoken Sanskrit.

23. Old Spanish bread PESETA
The peseta is the former currency of Spain, replaced by the euro in 2002.

25. Safe investment choices T-NOTES
A Treasury note (T-Note) is a government debt that matures in 1-10 years. A T-Note has a coupon (interest) payment made every six months. The T-note is purchased at a discount to face value, and at the date of maturity can be redeemed at that face value. A T-Bill is a similar financial vehicle, but it matures in one year or less, and a T-Bond matures in 20-30 years.

33. “Monster” Oscar winner THERON
Charlize Theron is an actress from South Africa who has played leading roles in Hollywood films such as “The Devil’s Advocate”, “The Cider House Rules” and my personal favorite “The Italian Job”.

“Monster” is a pretty disturbing crime drama released in 2003. The film’s storyline is based on the real-life story of Aileen Wuornos (played by Charlize Theron), a serial killer who was eventually caught and executed in 2002.

36. “Shirt Front and Fork” artist ARP
Hans Arp was a French artist renowned for his work with torn and pasted paper, although that wasn’t the only medium he used. Arp was the son of a French mother and German father and spoke both languages fluently. When he was speaking German he gave his name as Hans Arp, but when speaking French he called himself Jean Arp. Both “Hans” and “Jean” translate into English as “John”. In WWI Arp moved to Switzerland to avoid being called up to fight, taking advantage of Swiss neutrality. Eventually he was told to report to the German Consulate and fill out paperwork for the draft. In order to get out of fighting, Arp messed up the paperwork by writing the date in every blank space on the forms. Then he took off all of his clothes and walked with his papers over to the officials in charge. He was sent home …

37. Drum accompanying a fife TABOR
A tabor is a portable snare drum that is played with one hand. The tabor is usually suspended by a strap from one arm, with the other hand free to beat the drum. It is often played as an accompaniment for a fife or other small flutes. The word “tabor” comes from “tabwrdd”, the Welsh word for “drum”.

38. Team nicknamed the Halos, briefly LA ANGELS
The Anaheim Angels are today more correctly called the Los Angeles Angels of Anaheim. The “Angels” name dates back to 1961 when the team was founded in the “City of Angels”, Los Angeles. When the franchise moved to Anaheim in 1965 they were known as the California Angels, then the Anaheim Angels, and most recently the Los Angeles Angels at Anaheim. The team’s angelic nickname is “the Halos”.

41. Five-time 30-game winner of early baseball CY YOUNG
Cy Young was a pitcher in the major leagues from 1890-1911. Young is remembered for pitching the first perfect game of baseball’s modern era. Soon after he died in 1955, the Cy Young Award was created and is presented to the best pitcher in each baseball season.

43. Moisture overload results, in plants EDEMAS
Both animals and plants can suffer from edema, a swelling cause by excessive accumulation of fluid.

47. Door support JAMB
A door or window jamb is the vertical portion of the frame. The term “jamb” comes from the French word “jambe” meaning “leg”.

51. Source of a cc ORIG
I wonder do the kids of today know that “cc” stands for carbon copy, and do they have any idea what a carbon copy was? Do you remember how messy carbon paper was to handle?

52. “Lolita” co-star, 1962 MASON
English actor James Mason made a smooth transition to Hollywood after achieving incredible success in British films in the war years. Mason starred in such films as “The Desert Fox”, “20,000 Leagues Under the Sea”, “Lolita”, “North by Northwest” and “Journey to the Center of the Earth”.

58. “The Liberty Bell” composer SOUSA
John Philip Sousa was a composer and conductor from Washington, D.C. Sousa was well known for his patriotic marches and earned himself the nickname “The American March King”. He served as a member of the US Marine Band from 1868 to 1875, and after leaving the Marines learned to conduct and compose. One of the Sousa compositions that is well-known around the world is called “The Liberty Bell”, a tune used as the musical theme for BBC Television’s “Monty Python’s Flying Circus”. Sousa also wrote “Semper Fidelis”, which is the official march of the US Marine Corps.

60. Serf HELOT
The helots were a population of poorly-treated slaves who served the citizens of Sparta.

Down
1. Gripes BEEFS
A “beef” is a complaint or a grievance. It’s not quite clear how “beef” came to have this meaning, but one suggestion is that derives from the habit of soldiers at the end of the 1800s complaining about the quality or availability of beef in their rations.

2. Event celebrated in “Through the Looking-Glass” UNBIRTHDAY
In Lewis Carroll’s novel “Through the Looking-Glass”, Humpty Dumpty wears a cravat that the White King and Queen gave to him as an “unbirthday present”. The concept of an unbirthday, a celebration of any day that is not one’s birthday, spilled over into the Disney version of “Alice in Wonderland”, even though it is not mentioned in the original book. Alice receives an unbirthday cake from the Mad Hatter in the movie, and the Mad Hatter and the Dormouse sing “The Unbirthday Song”.

3. When “you’re gonna want me for your girl,” in a 1963 hit ONE FINE DAY
“One Fine Day” is a song written by Carole King and Gerry Goffin that was a 1963 hit for the Chiffons. The title of the song was inspired by the famous aria “Un bel di” (“One Fine Day”) from Puccini’s opera “Madama Butterfly”.

4. Mongolian dwelling YURT
A yurt is a wood-framed dwelling that is used by nomads in the steppes of Central Asia. Although a yurt is a substantial structure, it is of course extremely portable.

5. Jedi foes SITH
The Sith are characters in “Star Wars” that use the “dark side” of “the Force”, and as such are the antithesis of the Jedi Knights. The last made of the six “Star Wars” movies is called “Star Wars Episode III: Revenge of the Sith”.

7. Eye parts UVEAS
The uvea is the middle of the three layers that make up the eyeball. The uvea lies between the “fibrous tunic” on the outside of the eyeball, and the “retina” on the inside.

10. Cannon attachment -ADE
A “cannonade” is a bout of very heavy artillery fire. The term can also mean a harsh attack on someone, either verbal or physical.

12. Drama Desk relative OBIE
The Obies are the “Off-Broadway Theater Awards”. The Obies are presented annually and the recipients are chosen by “The Village Voice” newspaper.

13. Prismatic bone ULNA
The bone in the arm called the ulna is prismatic in shape, meaning that it is less like a cylinder than it is a prism, having flat sides that are parallel to each other.

23. Parker product PEN
The Parker Pen Company was founded in 1888 in Janesville, Wisconsin by George Safford Parker. Parker had repaired and sold fountain pens as a sideline for many years. With this experience, he created pens that were less likely to leak ink and founded his company based on these patented designs.

29. Semi-hard cheeses EDAMS
Edam cheese takes its name from the Dutch town of Edam in North Holland. The cheese is famous for its coating of red paraffin wax, a layer of protection that helps Edam travel well and prevents spoiling. You might occasionally come across an Edam cheese that is coated in black wax. The black color indicates that the underlying cheese has been aged for a minimum of 17 weeks.

30. Album that includes “Michelle” RUBBER SOUL
“Rubber Soul” is a Beatles album, the sixth one the band released. “Rubber Soul” was listed by “Rolling Stone” magazine as the fifth greatest album in music history.

The elegant and simple ballad “Michelle” was written mainly by Paul McCartney and released by the Beatles in 1965. “Michelle” won the Grammy for Best Song in 1967, beating out such classics as “Born Free”, “Somewhere My Love” and “Strangers in the Night”.

32. London flat? TYRE
The British spelling of “tyre”, for what we call a “tire” here in North America, was indeed the original spelling. The English started to use “tire” spelling in the 17th century, and then shifted back to the current “tyre” in the 19th century.

33. It’s 1 on the Mohs scale TALC
The Mohs scale of mineral hardness was developed in 1812 by Friedrich Mohs. Basically Mohs took minerals and scratched them with other minerals. In this way he was able to determine which minerals were hardest (most scratch resistant) and which softest. Famously, diamond is at the top of the Mohs scale (10) and talc is at the bottom (1).

36. Constantine native ALGERIAN
Constantine in northeastern Algeria is the third largest city in the country, after Algiers and Oran. Constantine is known as “the City of Bridges”. The city is at elevation and is built on mountains, so these bridges cross ravines rather than rivers.

42. Caught stealing, say TAGGED
In baseball, a player might get tagged while attempting to get a stolen base.

47. Little bits JOTS
A “jot” is something very small, from the Latin “jota”, which in turn is from the Greek “iota”, the smallest letter in the Greek alphabet.

52. Plymouth potato dish MASH
Plymouth is a port city on the coast of Devon in the UK. It was the point of departure of the Mayflower Pilgrims.