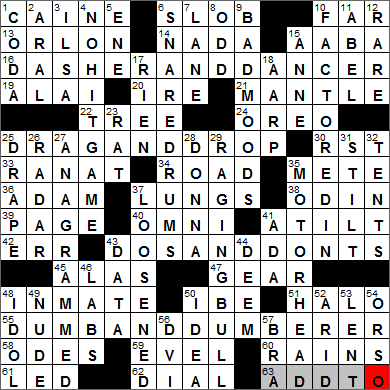 CROSSWORD SETTER: Erik Agard
THEME: D&D … today’s themed answers are each made up two words starting with the letter D and linked by AND. As an extra treat, the D-words in each answer start with the same two letters:

16A. First two reindeer named in Rudolph’s song DASHER AND DANCER
25A. Use a mouse to move a file between folders, say DRAG AND DROP
43A. List of behavioral recommendations DOS AND DON’TS
55A. 2003 prequel subtitled “When Harry Met Lloyd” DUMB AND DUMBERER

Today’s Wiki-est, Amazonian Googlies
Across
1. Michael who plays Alfred in many Batman movies CAINE
There have been only two actors who have been nominated for an Academy Award in every decade from the 1960s to the 2000s. One is Jack Nicholson, and the other is Michael Caine. Caine is now known as Sir Michael Caine, as he was knighted by Queen Elizabeth II in the year 2000.

13. Lightweight synthetic ORLON
Orlon is the brand name used by the DuPont Corporation for the acrylic fibers the company developed in 1941.

14. Nothing, in Nicaragua NADA
Nicaragua is the largest country in Central America, lying between Honduras to the north, and Costa Rica to the south. The etymology of the name “Nicaragua” is not very certain. One suggestion is that it is a melding of the name “Nicarao” and “agua”, the Spanish for “water”. Nicarao was the name of the largest city in the area when the Spanish arrived, and it is thought that “agua” refers to the two large lakes: Lake Managua and Lake Nicaragua.

16. First two reindeer named in Rudolph’s song DASHER AND DANCER
We get the names for Santa’s reindeer from the famous 1823 poem called “A Visit from St. Nicholas”, although we’ve modified a couple of the names over the years. The full list is:

The song “Rudolph the Red-Nosed Reindeer” was written by Johnny Marks, and was based on the story created by Marks’ brother-in-law Robert L. May.

19. Jai __ ALAI
Even though jai alai is often said to be the fastest sport in the world because of the speed of the ball, in fact golf balls usually get going at a greater clip. Although, as a lind blog reader once pointed out to me, you don’t have to catch a golf ball …

21. Baseball legend Mickey MANTLE
Mickey Mantle only played professional baseball for the one team, spending 18 years with the New York Yankees. Mickey Mantle memorabilia is highly prized, especially since he retired from the game in 1969, and even more so since he died in 1995. The only other player memorabilia said to command a higher price is Babe Ruth’s.

24. Layered cookie OREO
How the Oreo cookie came to get its name seems to have been lost in the mists of time. One theory is that it comes from the French “or” meaning “gold”, a reference to the gold color of the original packing. Another suggestion is that the name is the Greek word “oreo” meaning “beautiful, nice, well-done”.

34. The Beatles’ “Abbey __” ROAD
“Abbey Road” was the last album that the Beatles released before they finally broke up. “Abbey Road” was named after the street in London in which the recording studio was located. The Fab Four is featured in the album’s cover, walking across the pedestrian crossing that’s in the road right in front of the studio.

36. Eden exile ADAM
In the Christian tradition, “original sin” is the state of sin that exists in all humanity as a result of Adam’s first disobedience in the Garden of Eden. According to the Roman Catholic faith, three people were born without original sin: the Virgin Mary, Jesus Christ and John the Baptist.

37. Thorax organs LUNGS
The thorax is another name for the chest, the part of the human body between the neck and the diaphragm.

38. Thor’s father ODIN
In Norse mythology, Odin was the chief of the gods. Odin’s wife Frigg was the queen of Asgard whose name gave us our English term “Friday” (via Anglo-Saxon). Odin’s son was Thor, and his name gave us the term “Thursday”.

40. Former Atlanta arena OMNI
The Omni Coliseum was the arena that was home to the Atlanta Hawks basketball team from 1972-1997. “The Omni” was part of the Omni Complex that is now called the CNN Center, the world headquarters of CNN.

51. Ring of light HALO
The Greek word “halos” is the name given to the ring of light around the sun or moon.

58. Many Keats poems ODES
The poet John Keats is famous for writing a whole series of beautiful odes. The most renowned are the so-called “1819 Odes”, a collection from the year 1819 that includes famous poems such as “Ode on a Grecian Urn”, “Ode to a Nightingale” and “Ode to Psyche”.

59. Stunt rider Knievel EVEL
Daredevil Evel Knievel contracted hepatitis C from the many blood transfusions that he needed after injuries incurred during stunts. He had to have a liver transplant as a result, but his health declined after that. He eventually passed away in 2007.

Down
1. Sonata ending CODA
In music, a coda is primarily a passage that brings a movement to a conclusion. “Coda” is Italian for “tail”.

2. Inland Asian sea ARAL
The Aral Sea is a great example of how man can have a devastating effect on his environment. In the early sixties the Aral Sea covered 68,000 square miles of Central Asia. Soviet Union irrigation projects drained the lake to such an extent that today the total area is less than 7,000 square miles, with 90% of the lake now completely dry. Sad …

3. “Casablanca” heroine ILSA
Ilsa Lund was of course played by Ingrid Bergman in the 1942 movie “Casablanca”. I love the words of one critic describing the chemistry between Bogart and Bergman in this film: “she paints his face with her eyes”. Wow …

6. Marching band percussion instruments SNARE DRUMS
Snare drums are so called because they have a set of wire strands (called snares) stretched across the bottom surface of the drum. When the drum is struck, the snares vibrate against the bottom drumhead producing a unique sound.

9. Snits BAD MOODS
The exact etymology of “snit”, meaning “fit of temper”, isn’t really known. The term was first used in print in the play “Kiss the Boys Goodbye” by Clare Booth Luce, which dates back to the 1930s and is set in the American South.

11. 36-Across’ second son ABEL
(36A. Eden exile ADAM)
According to the Bible, Adam and Eve had several children, although only the first three are mentioned by name: Cain, Abel and Seth.

15. Diarist Frank ANNE
Anne Frank has to be one of the most famous victims of the Holocaust. This is largely because the story of this young girl lives on in her widely published diary, and in adaptations of the diary for stage and screen. Anne Frank was a German until she lost her nationality in 1941 when the Nazis came to power. By this time she was living with her family in Amsterdam, as the Franks chose to flee Germany in 1933. When the Germans occupied the Netherlands, the family went into hiding in the attic of Otto Frank’s office building (Otto was Anne’s father). There the family hid for two whole years until they were betrayed. The family was split up, and Anne and her sister died from typhus in a concentration camp in 1945.

17. Nothing, in Nice RIEN
The city of Nice lies on the Mediterranean coast of France, not far from the Italian border. Although it is only the fifth most populous city, Nice has the second busiest airport in the country (after Paris) thanks to the vast number of jet-setting tourists that flock to the French Riviera.

18. 50-and-over org. AARP
AARP is now the official name for the interest group that used to be called the American Association of Retired Persons. The name change reflects the current focus of the group on all Americans aged 50 or over, as opposed to just people who have retired. The AARP has two affiliated organizations. The AARP Foundation is a charitable arm that helps older people who are in need. AARP Services sells services such as insurance and advertising in AARP publications. In 2008, AARP services made over $650 million selling insurance, and about $120 million from selling advertising space in AARP publications.

23. Critter before or after pack RAT
The original Rat Pack from the fifties was a group of actors that centered on Humphrey Bogart, and included a young Frank Sinatra. Supposedly, Bogart’s wife, Lauren Bacall, christened them the Rat Pack after seeing them all return from one of their nights on the town in Las Vegas. The sixties Rat Pack was a reincarnation of the fifties version, with the core group of actors being Frank Sinatra, Dean Martin (Dino), Sammy Davis Jr., Joey Bishop and Peter Lawford.

A pack rat is rodent that can also be called a woodrat. The pack rat is so called because it frequently drags back objects to its nest. We’ve been using the term “pack rat” for a hoarder since the mid 1800s, so it’s not certain if the rodent was named for the human, or the human for the rodent.

26. Plane tracker RADAR
Scientists have been using radio waves to detect the presence of objects since the late 1800s, but it was the demands of WWII that accelerated the practical application of the technology. The British called their system RDF standing for Range and Direction Finding. The system used by the US Navy was called Radio Detection And Ranging, which was shortened to the acronym RADAR.

29. 1980 De Niro film about a boxer RAGING BULL
I just do not like boxing, nor movies about boxing, but I certainly accept that “Raging Bull” is true cinema classic. It is a biopic released in 1980, with Robert De Niro starring as Jake LaMotta, and ably directed by Martin Scorsese. Famously, De Niro gained about 70 pounds in weight to lay LaMotta in his early years, showing true dedication to his craft.

35. British heavy metal band with the album “Ace of Spades” MOTORHEAD
Motörhead (note the spelling, with the umlaut over the “O”) is a rock band from England that was formed in 1975 that is still performing today. “Motorhead” is another term for a “speed freak”, someone addicted to the use of amphetamines.

57. Bikini top BRA
The origin of the name “bikini”, a type of bathing suit, seems very uncertain. My favorite story is that it is named after the Bikini Atoll, site of American A-bomb tests in the forties and fifties. The name “bikini” was chosen for the swim-wear because of the “explosive” effect it had on men who saw a woman wearing the garment!