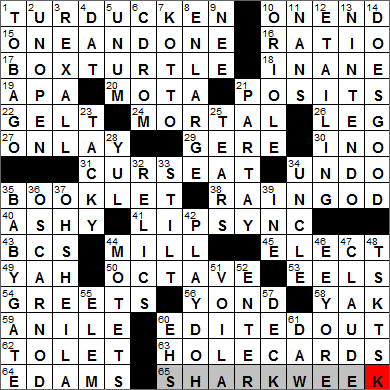 17. Tennessee’s state reptile BOX TURTLE
The box turtle truly is a turtle, even though it lives on land. Because of its terrestrial home it is sometime wrongly referred to as the box tortoise.

20. Longest-serving Dodger coach Manny MOTA
Manny Mota is a retired MLB outfielder who has been coaching for the Dodgers since 1980. Mota’s tenure with the Dodgers is the second longest in Major League Baseball history.

21. Puts forth POSITS
“To posit” is to put forward for consideration, to “suggest a position”.

24. Like some sins MORTAL
In some Christian denominations, sins can be either venial or mortal in terms of severity, with mortal sins being the more grievous.

27. Dental crown alternative ONLAY
“Inlay” is another word for a filling in dentistry. An “onlay” is similar to an inlay. An onlay not only fills a hole in the tooth but it is also built up to replace a missing cusp. It’s sort of halfway between a filling and a crown, I suppose.

29. People magazine Sexiest Man Alive of 1999 GERE
Richard Gere has played such great roles on the screen, and I find him to be a very interesting character off the screen. Gere has been studying Buddhism since 1978 and is a very visible supporter of the Dalai Lama and the people of Tibet.

“People” magazine is noted for its annual special editions with features such as “Best & Worst Dressed” and “Sexiest Man Alive”. The “Sexiest Man Alive” edition now appears at the end of November each year. The first choice for “Sexiest Man” was Mel Gibson, in 1985. This year’s choice was crossword blogger Bill Butler (just checking to see if anyone is reading this!).

30. Harmonia’s daughter, in Greek myth INO
Ino was a mortal queen of Orchomenus through her marriage to King Athamas. In Greek mythology, Ino became the goddess Leukothea after her death. As Leukothea she provided divine aid to Odysseus, according to Homer’s “Odyssey”. She provided Odysseus with a magical veil that he used to escape from Poseidon.

38. Chaac, to Mayans RAIN GOD
chaac was the Mayan rain god, a deity who carried a lightning axe with which he struck the clouds producing thunder and rain. The equivalent Aztec god was Tlaloc.

43. NCAA year-end games system BCS
The Bowl Championship Series (BCS) is the system that is used to match up the top ten ranked NCAA football teams for five bowl games.

50. Common hand span OCTAVE
A piano player can often span eight notes with his or her hand i.e. an octave.

53. Catch in pots EELS
An eelpot is used to catch eels. Similar to a lobster pot, and eelpot is usually box-shaped with a funnel-like entrance that an eel can swim into, but through which it cannot escape.

59. Doddering ANILE
“Anile” is another word for “senile”, especially when applied to an old woman.

63. Stud revelations HOLE CARDS
Stud poker is the name given to many variants of poker, all characterized by the dealer giving each player a mix of cards face-down and face-up. The cards facing downwards are called “hole cards”, cards only visible to the individual who holds that particular hand. This gives rise to the phrase “ace in the hole”, a valuable holding that only the player with the ace is aware of.

64. Toponymic dairy items EDAMS
Edam cheese takes its name from the Dutch town of Edam in North Holland. The cheese is famous for its coating of red paraffin wax, a layer of protection that helps Edam travel well and prevents spoiling. You might occasionally come across an Edam cheese that is coated in black wax. The black color indicates that the underlying cheese has been aged for a minimum of 17 weeks.

A “toponym” is a name that comes from a place or region. For example, New Jersey is named for the island of Jersey in the English Channel and Indianapolis is named for the state of Indiana.

65. Summer TV offering with a “Jaws of Steel Collection” DVD SHARK WEEK
“Shark Week” is an annual event on the Discovery Channel, and has been so since 1987. The week is full of TV shows and specials that are shown with the stated intent of promoting awareness and respect for sharks.

Down
1. Lesser Antilles island TOBAGO
Tobago is the smaller of the two Caribbean islands that make up the Republic of Trinidad and Tobago. One theory is that the island is named for the “tabago”, a Y-shaped pipe used by the island natives for sniffing tobacco smoke.

3. Old drugstore chain REXALL
Rexall was a chain of drugstores in North America which started out in 1902 as a retailers’ cooperative called United Drug Stores. The name “Rexall” was derived from the “Rx” abbreviation used for prescriptions. Rexall used a very interesting marketing concept in 1936. The company sent “The Million Dollar Rexall Streamlined Convention Train” on a tour all over the US. The train had 12 cars which included product displays, convention facilities and a dining car. The idea was to allow local druggists to attend a convention without having the cost of travel, and of course to promote products and the brand.

“Show Boat” is a musical by Jerome Kern and Oscar Hammerstein, first staged in New York in 1927. It is based on a 1926 novel of the same name by Edna Ferber. The story is about a show boat called the “Cotton Blossom”. Show boats were floating theaters which navigated the rivers of the US from the 1870s to the 1930s, moving from town to town with the performers living on board. “Show Boat” was famously adapted for the big screen in 1936, with stars Irene Dunne, Allan Jones and Paul Robeson.

7. Actor Yaphet __ of “Midnight Run” KOTTO
Yaphet Kotto is an actor from New York City who is probably best known for playing Lieutenant Al Giardello on the TV show “Homicide: Life on the Street” in the nineties. I know Kotto mainly for his role as bad guy Mr. Big in the Bond movie “Live and Let Die”.

9. Formerly NEE
“Née” is the French word for “born” when referring to a female. The male equivalent is “né”.

10. Yankee foe ORIOLE
The Baltimore Orioles (sometimes “the O’s”) were one of the eight charter teams of MLB’s American League, so the franchise dates back to 1901. Prior to 1901, the team has roots in the Minor League Milwaukee Brewers, and indeed entered the American League as the Brewers. In 1902 the Brewers moved to St. Louis and became the Browns. The team didn’t fare well in St. Louis, so when it finally relocated to Baltimore in the early fifties the team changed its name completely, to the Baltimore Orioles. The owners so badly wanted a fresh start that they traded 17 old Browns players with the New York Yankees. The trade didn’t help the team’s performance on the field in those early days, but it did help distance the new team from its past.

11. Some flatbreads NANS
Naan (also “nan”) bread is very popular in Indian restaurants, as well as in other West, Central and South Asian cuisines. Indian Naan is traditionally baked in a clay oven known as a tandoor.

12. Selling using servers ETAILING
“Etail” is the term used these days for online shopping. Etail is often compared to regular shopping in the “real world” by juxtaposing it with a “brick and mortar” store.

13. Kyoto-based entertainment company NINTENDO
Nintendo is a Japanese company, the largest manufacturer of video games in the world. Nintendo was founded way back in 1889 and originally made hanafuda cards, Japanese playing cards. The name “Nintendo” translates as “leave luck to heaven”.

28. Co-star of Steve in “The Magnificent Seven” YUL
Yul Brynner was a Russian-born actor. Brynner was well known for his great performances, but also for his shaved head and his deep rich voice. He first adopted the “hairstyle” while playing the King of Siam in the stage version of “The King and I”, and he stuck with it.

Apparently Steve McQueen wasn’t the easiest actor to work with, at least as far as directors were concerned. He pretty much had a free rein though, as he was so popular with the public in the seventies (he had the nickname “The King of Cool”). McQueen was the highest paid movie star in 1974.

“The Magnificent Seven” really is a very entertaining western movie (and I am no fan of westerns, quite frankly). Famously, it is a 1960 remake of the Akira Kurosawa 1954 Japanese film, “Seven Samurai”. The film is the second most shown film on television in the US. Only “The Wizard of Oz” gets more air time.

39. Like Vivaldi’s “Spring” IN E
Antonio Vivaldi was one of the great composers of the Baroque period. Vivaldi achieved fame and success within in his own lifetime, notoriety that faded soon after he died. His music has reemerged in recent decades and most people are familiar with at least part of his most famous composition, the set of four violin concertos called “The Four Seasons”. Vivaldi was nicknamed “The Red Priest” because he was indeed a priest, and he had red hair.

42. “Imagination Taking Shape” sloganeer PLAY-DOH
Back in the 1930s, a manufacturer in Cincinnati produced a doughy compound that was used to clean wallpaper. Twenty years later, school-kids started using the cleaning material as a modelling compound, so the manufacturer reworked the formula, and sold it to local schools. It was given the name Play-Doh.

44. Church compositions MOTETS
A motet is a simple musical composition based on a sacred text, usually sung without an accompaniment. The term “motet” is a diminutive of the French for “word” … “mot”.

46. Kiddie lit character with a detachable tail EEYORE
Eeyore is the donkey character in A. A. Milne’s “Winnie-the-Pooh”. Eeyore is very lovable, but has a gloomy and pessimistic outlook on life.

47. Composer Debussy CLAUDE
Claude Debussy is one of my favorite composers, someone who epitomises the Romantic Era and Impressionist Movement in music. One of my favorite CDs is a collection of some “lighter” Debussy pieces called “Debussy for Daydreaming”, and what an evocative collection it is. Included are “Syrinx”, “Maid with the Flaxen Hair”, “Rêverie” and everyone’s favorite, “Clair de Lune”.

61. Crow cousin DAW
Daws are better known today as jackdaws and belong to the crow family. The jackdaw features in a famous pangram (i.e. a short sentence containing all 26 letters of the alphabet) … “Jackdaws love my big sphinx of quartz”.