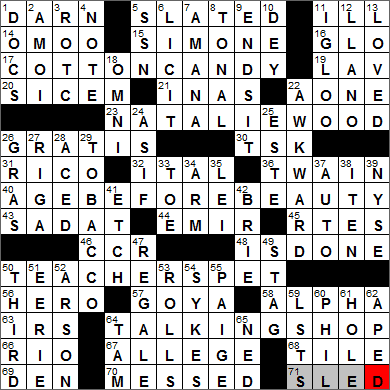 64A. Discussing the job with colleagues, and what the last words of the answers to starred clues seem to be doing TALKING SHOP

Today’s Wiki-est, Amazonian Googlies
Across
5. On the agenda SLATED
An item that has “been slated” has been put on the agenda, scheduled. The term comes from the notion of writing something down on a slate board.

14. Melville’s “Typee” sequel OMOO
Herman Melville mined his own experiences when writing his novels. Melville sailed from New Bedford, Massachusetts in 1841 on a whaler heading into the Pacific Ocean (a source for “Moby Dick”). Melville ended up deserting his ship 18 months later and lived with natives on a South Pacific Island for three weeks (a source for “Typee”). He picked up another whaler and headed for Hawaii, where he joined the crew of a US navy frigate that was bound for Boston (a source for “Omoo”).

17. *Fluffy carnival treat COTTON CANDY (giving “candy shop”)
What we call “cotton candy” here in the US has some interesting names in the rest of the world. Back in Ireland it’s candyfloss, and in France it “barbe à papa” (Dad’s beard). In Australia it is called fairy floss, which is actually the original name for cotton candy, first used when it was introduced at the St. Louis World’s Fair in 1904.

19. Restroom, briefly LAV
Our word “lavatory” originally referred to a washbasin, and comes from the Latin “lavatorium”, a place for washing. In the 1600s a “lavatory” came to mean a washroom, and in the 1920s a toilet.

23. *”West Side Story” film actress NATALIE WOOD (giving “woodshop”)
The actress Natalie Wood was born in San Francisco to Russian immigrant parents, her real name being Natalia Nikolaevna Zacharenko. Wood performed in many great films over her relatively short career. She played a leading role in “Miracle on 34th Street” when she was just 8-years-old, and in “Rebel Without a Cause” when she was a teenage. There followed hits like “West Side Story”, “Gypsy” and “Splendor in the Grass”. Famously, Wood was married to Robert Wagner, twice. Wagner and Wood were on a weekend boat trip to Santa Clara Island when she drowned in 1981. The death was deemed to be an accident after an investigation. However, in 2011 the boat’s captain revealed that he had lied during that investigation and claimed that Wood died as the result of a fight with Wagner. Wood’s death certificate was amended as a result, with a statement that how Wood entered the water was not clearly established.

26. Free of charge GRATIS
Something provided “gratis” is supplied free of charge. “Gratis” is a Latin term, a contraction of “gratiis” meaning “for thanks”.

31. Puerto __ RICO
Puerto Rico is located in the northeastern Caribbean (in the Atlantic Ocean), east of the Dominican Republic. The name “Puerto Rico” is Spanish for “rich port”. The locals often call their island Borinquen, the Spanish form of “Boriken”, the original name used by the natives.

32. Slanted print: Abbr. ITAL
Italic type leans to the right. The style is known as “italic” because the stylized calligraphic form of writing originated in Italy, probably in the Vatican.

36. Mark who created Tom Sawyer TWAIN
Samuel Langhorne Clemens was the real name of the author Mark Twain. Twain wasn’t the only pen name used by Clemens. Early in his career he signed some sketches as “Josh”, and signed some humorous letters that he wrote under the name “Thomas Jefferson Snodgrass”. The name of “Mark Twain” came from the days when Clemens was working on riverboats on the Mississippi. A riverboat man would call out “by the mark twain” when measuring the depth of water. This meant that on the sounding line, according to the “mark” on the line, the depth was two (“twain”) fathoms, and so it was safe for the riverboat to proceed.

43. ’70s-’80s Egyptian president Anwar SADAT
Anwar Sadat was the third President of Egypt right up to the time of his assassination in 1981. Sadat won the Nobel Peace Prize in 1978 along with Israeli Prime Minister Menachem Begin for the role played in crafting the Israel-Egypt Peace Treaty of 1978 at Camp David. It was this agreement that largely led to Sadat’s assassination three years later.

46. “Proud Mary” band, for short CCR
“Proud Mary” is a song written by John Fogarty and recorded in 1968 by Creedence Clearwater Revival with Fogarty singing lead vocals. The song was famously covered by Ike and Tina Turner in 1970.

Creedence Clearwater Revival (CCR) was a rock band from San Francisco that actually played in a Southern rock style, with hits such as “Proud Mary”, “Bad Moon Rising”, “Down on the Corner” and “Who’ll Stop the Rain”.

57. Spanish painter Francisco GOYA
Francisco Goya was a Spanish painter, often called the last of the Old Masters and the first of the moderns. Two of Goya’s most famous works are “The Nude Maja” and “The Clothed Maja”.

63. Tax-collecting agcy. IRS
The Internal Revenue Service (IRS) was set up during the Civil War to raise money to cover war expenses. Prior to the introduction of income tax in 1862, the government was funded by levies on trade and property.

66. __ de Janeiro RIO
Rio de Janeiro is the second largest city in Brazil (after São Paulo). “Rio de Janeiro” translates as “January River”. The name reflects the discovery of the bay on which Rio sits, on New Years Day in 1502.

3. Campus military org. ROTC
The Reserve Officers’ Training Corps (ROTC) is a training program for officers based in colleges all around the US. The ROTC program was established in 1862 when as a condition of receiving a land-grant to create colleges, the federal government required that military tactics be part of a new school’s curriculum.

5. Taxpayer ID SSN
The main purpose of a Social Security Number (SSN) is to track individuals for the purposes of taxation, although given its ubiquitous use, it is looking more and more like an “identity number” to me. The social security number system was introduced in 1936. Prior to 1986, an SSN was required only for persons with substantial income so many children under 14 had no number assigned. For some years the IRS had a concern that a lot of people were claiming children on their tax returns who did not actually exist. So, from 1986 onward, it is a requirement to get an SSN for any dependents over the ago of 5. Sure enough, in 1987 seven million dependents “disappeared”.

7. Appliance brand AMANA
The Amana Corporation takes its name from the location of its original headquarters, in Middle Amana, Iowa.

“The Partridge Family” is a musical sitcom that had a very successful run in the early seventies. The basic story for the show was that a group of five siblings convince their widowed mother (played by Shirley Jones) to form a band and go on tour. Some of the actors playing the siblings made successful careers for themselves after the show was taken off the air in 1974, namely David Cassidy, Susan Dey and Danny Bonaduce.

25. Direction in which el sol rises ESTE
In Spanish, the sun (el sol) rises in the east (este).

26. Mardi __ GRAS
“Mardi Gras” translates from French as “Fat Tuesday”, and gets its name from the practice of eating rich foods on the eve of the fasting season known as Lent.

27. Capital of Latvia RIGA
Riga is the capital city of Latvia. The historical center of Riga is a UNESCO World Heritage Site, declared as such because of the city’s magnificent examples of Art Nouveau architecture.

Latvia is one of the former Soviet Socialist Republics. People from Latvia are called Letts.

29. Cash crop for the southern American colonies TOBACCO
The World Health Organization (WHO) tells us that the use of tobacco is the leading cause of preventable death worldwide. Over 5 million deaths per year are attributed directly to tobacco.

38. Fla.-to-Cal. highway I-TEN
I-10 is the most southerly of the interstate routes that crosses from the Atlantic to the Pacific. I-10 stretches from Santa Monica, California to Jacksonville, Florida.

39. Wall St. index NYSE
The roots of the New York Stock Exchange (NYSE) go back to 1792 when a group of 24 stock brokers set up the New York Stock & Exchange Board. They did so in an agreement signed under a buttonwood tree outside 68 Wall Street. That document became known as the Buttonwood Agreement.

42. Soft cheese BRIE
Brie is a soft cheese, named after the French region from which it originated. Brie is similar to the equally famous (and delicious) camembert.

50. Word with party or degree THIRD
“Third degree” is used to describe a particularly rough interrogation. We seem to be unsure where the expression originates, but there are theories. One is that it refers the third degree level of Freemasonry, which requires rigor and dedication to attain. Another theory is that it comes from Richard Sylvester who was Chief of Police for Washington, D.C. in the early 1900s. Sylvester saw the first degree of police procedure as arrest, the second degree as transportation to jail, and the third degree as interrogation.

54. Comedian Wanda SYKES
Wanda Sykes is a very successful American comedienne and comic actress. Interestingly, Sykes spent her first five years out of school working for the NSA. I saw her perform in Reno quite recently, and she is very, very funny.

55. Baseball Hall of Famer Satchel PAIGE
Satchel Paige pitched baseball in the Negro leagues and then the majors, retiring in 1966. When he moved to the Major League, he was 42 as he pitched his first game, making him the oldest ever “rookie” to play Major League Baseball. And when he was elected to the Baseball Hall of Fame in 1971, he was the first person to be so honored from the Negro leagues.

59. D-Day transports LSTS
LST stands for Landing Ship, Tank. LSTs were the large vessels used mainly in WWII that had doors at either ends through which tanks and other vehicles could roll off and onto beaches. The design concept persists to this day in the huge fleet of commercial roll-on/roll-off car ferries, all inspired by the LST.

“Donahue” was a show hosted on MSNBC by longtime talk show host Phil Donahue. Donahue had basically retired after a 26-year run with the successful “Phil Donahue Show” on network television, and then was persuaded to join MSNBC. “Donahue” only ran for a few months before it was cancelled for having low viewership. That said, it had the highest viewership of any show on MSNBC at that time, so there was obviously more going on …

64. Scottish hat TAM
A tam o’shanter is a man’s cap traditionally worn by Scotsmen. “Tams” were originally all blue (and called “blue bonnets”), but as more dyes became readily available they became more colorful. The name of the cap comes from the title character of Robert Burns’ poem “Tam O’Shanter”.

65. Beatty of film NED
Ned Beatty is probably best remembered for the rather disturbing “squeal like a pig” scene in the movie “Deliverance”. Beatty also earned an Academy Award nomination for Best Supporting Actor for his performance in the 1976 movie “Network”.