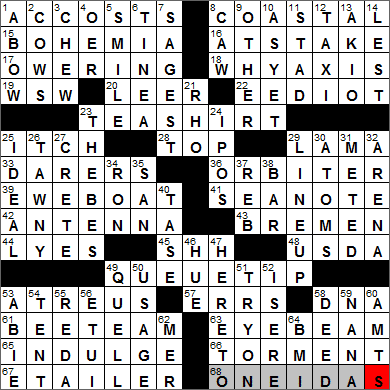 Today’s Wiki-est, Amazonian Googlies
Across
15. Avant-garde neighborhood BOHEMIA
Bohemia covers most of the Czech Republic. Centuries ago, it was wrongly believed that gypsies came from Bohemia, giving rise to the term “Bohemian” meaning a “gypsy of society”.

People described as being avant-garde are especially innovative. “Avant-garde” is French for “advance guard”.

22. “You __!”: Ren, to Stimpy EEDIOT
“The Ren and Stimpy Show” is an animated television show that ran on Nickelodeon from 1991 to 1996. The title characters are Marland “Ren” Höek, a scrawny Chihuahua, and Stimpson J. Cat, a rotund Manx cat. Not my cup of tea …

39. Sheep transport? EWE BOAT (sounds like “U-boat”)
U-boat stands for the German “Unterseeboot” (undersea boat). Notably, a U-boat sank the RMS Lusitania in 1915, an event that helped propel the US into WWI.

42. Internal device on most cellphones ANTENNA
An antenna’s job is to convert electrical power into radio waves, and radio waves into an electrical signal. The first antennas were built by the German physicist Heinrich Hertz in 1888.

43. German port BREMEN
Germany is divided into 16 states, the smallest of which is Bremen. The state of Bremen is actually made up of two port cities, Bremen and Bremerhaven, and is completely surrounded by the much larger state of Lower Saxony.

49. Suggestion from one waiter to another? QUEUE TIP (sounds like “Q-Tip”)
Cotton swabs were originally marketed under the name “Baby Gays”, but this was changed in 1926 to “Q-Tips”, with the Q standing for “quality”.

53. Agamemnon’s father ATREUS
In Greek mythology, Atreus was the father of Agamemnon and Menelaus. It was Menelaus who married Helen of Troy who was abducted by Paris, and Agamemnon who led the Greeks in the resulting Trojan War.

58. Stranded stuff DNA
Francis Crick and James Watson discovered that DNA had a double-helix, chain-like structure, and published their results in Cambridge in 1953. To this day the discovery is mired in controversy, as some crucial results collected by fellow researcher Rosalind Franklin were used without her permission or even knowledge.

63. Lasik ray? EYE BEAM (sounds like “I-beam”)
LASIK surgery uses a laser to reshape the cornea of the eye to improve vision. The LASIK acronym stands for “laser-assisted in situ keratomileusis”.

67. Always-open merchant ETAILER
“Etail” is the term used these days for online shopping. Etail is often compared to regular shopping in the “real world” by juxtaposing it with a “brick and mortar” store.

68. New York tribe ONEIDAS
The Oneida people originally lived in the area that is now Central New York. The Oneida were one of the five founding nations of the Iroquois Confederacy, also known as the Five Nations (the Mohawk, Oneida, Onondaga, Cayuga and Seneca).

Down
2. Intimidates COWS
The verb “to cow” means to intimidate, to scare. The exact etymology of the term seems unclear.

3. Enjoy some Trident CHEW
Trident chewing gum was introduced in 1960, and was marketed as a gum that aided in dental health. The original formula included three enzymes that were thought to soften dental tartar. This trio of enzymes gave rise to the name “Trident”.

7. Most like a guru SAGEST
“Guru” is a Hindi word meaning “teacher” or “priest”.

8. Avian cry CAW
“Avis” is the Latin word for a bird, giving rise to our adjective “avian” meaning “relating to birds”.

9. With “The,” 1971 best-seller about an evil twin OTHER
“The Other” is the first novel actor turned novelist Thomas Tryon, and was originally published in 1971. “The Other” tells the story of two identical twins, one who is a normal teenager and the other who is a sociopath. The novel was adapted into scary 1972 film of the same name, starring Uta Hagen.

12. Sitcom set in a garage TAXI
“Taxi” is a sitcom that aired in the late seventies and early eighties. “Taxi” was the big break for a host of great comic actors including Judd Hirsch, Jeff Conaway, Danny DeVito, Marilu Henner, Tony Danza, Christopher Lloyd and Andy Kaufman.

14. “__ we forget” LEST
“Lest we forget” is an oft-quoted phrase, one that comes from a poem by Rudyard Kipling called “Recessional”. Kipling wrote the piece on the occasion of the Diamond Jubilee of Queen Victoria in 1897 and used it to express sadness at the waning of the British Empire. The phrase “lest we forget” is used in this context, a warning that the empire will decline. Ever since WWI we’ve been using the words on memorials as a plea not forget the sacrifices made by others in the past.

21. Greek consonant RHO
Rho is the Greek letter that looks just like our Roman letter “p”.

23. Ancient city whose ruins are in modern Luxor THEBES
Thebes was a city in Ancient Egypt located on the river Nile, the ruins of which are now found with the bounds of the modern city of Luxor. The ruins of Ancient Thebes include the famous Luxor Temple and and Karnak Temple, as well as the Valley of the Kings and the Valley of the Queens.

24. Wall St. debuts IPOS
An Initial Public Offering (IPO) is the very first offer of stock for sale by a company on the open market. In other words, an IPO marks the first time that a company is traded on a public exchange. Companies have an IPO to raise capital to expand (usually).

27. Land of the Minotaur CRETE
Crete is the largest of the Greek Islands. Crete figures heavily in Greek mythology. Zeus was born in a cave at Mount Ida, the highest peak on the island. Crete was also home to the Labyrinth where the Minotaur was slain by Theseus. Icarus and Daedalus, after having crafted the Labyrinth, escaped from the island using wings that they crafted.

30. Proton carriers ATOMS
A proton is a subatomic particle, with at least one found in the nucleus of every atom. A proton is not a “fundamental particle” though, as it itself is made up of three quarks; two up quarks and one down quark.

32. Amphitheater ARENA
An “amphitheater” is a large oval or round arena. The term comes from Greek, with “amphi-” meaning “on both sides” and “theatron” meaning “theater”. The original Greek amphitheaters included two semi-circular seating areas so that audience members sat “on both sides” of the stage.

35. __ Miguel: Cozumel city SAN
San Miguel is the largest town on the Caribbean island of Cozumel in the Mexican state of Quintana Roo. Cozumel is a major destination for cruise ships, and for scuba divers. I spent a fun week diving in Cozumel with my teenage son many moons ago …

38. Musical measure BAR
Musical scores are divided into “measures”, although on the other side of the Atlantic the term “bar” is used instead of “measure”.

40. Zap, in a way TASE
Victor Appleton wrote a novel for young adults called “Tom Swift and His Electric Rifle”. The company that developed the TASER electroshock weapon named its product as a homage to the novel. The acronym TASER stands for “Thomas A. Swift’s Electric Rifle”.

47. Contract adverb HERETO
The word “hereto” is legalese for “to here”, as in “attached hereto” meaning “attached to here”.

52. Rhone feeder ISERE
The Isère river gives its name to the French Department of Isère, located partly in the French Alps. In turn, Isère gave its name to a somewhat famous ship called the Isère, which in 1885 delivered the Statue of Liberty from France to America in 214 shipping crates.

53. Rose’s Broadway beau ABIE
“Abie’s Irish Rose” was originally a Broadway play by Anne Nichols that opened in 1922 and ran for over five years, which back then was the longest run for any show in New York. The show then went on tour, and stayed on tour for an amazing 40 years.

55. Prynne’s stigma RED A
Hester Prynne is the main character in Nathaniel Hawthorne’s novel “The Scarlet Letter”. When Hester is convicted by her puritanical neighbors of the crime of adultery, she is forced to wear a scarlet “A” on her clothing for the rest of her life, hence the novel’s title, “The Scarlet Letter”.

56. Holder of needles and such ETUI
An etui is an ornamental case used to hold small items, in particular sewing needles. We imported both the case design and the word “etui” from France. The French also have a modern usage of “etui”, using the term to depict a case for carrying CDs.

58. Bit of derring-do DEED
As one might expect, “derring-do” comes from the phrase “daring to do”, which back in the 14th century was written as “dorrying don”.

The Côte d’Azur is on the Mediterranean coast of France and stretches from Saint Tropez in the west and to the Italian border in the east. In English we often refer to the area as the French Riviera. It’s a little crowded for me (okay … expensive!), especially in the summer.

64. Ratio involving ht. and wt. BMI
The body mass index (BMI) is the ratio of a person’s height to his or her mass.